Interstellar Technologies seeks cause of damage to frame

TOKYO -- The failed launch of Japan's first privately developed rocket, dubbed the Momo, leaves the company behind the effort anticipating another attempt soon. 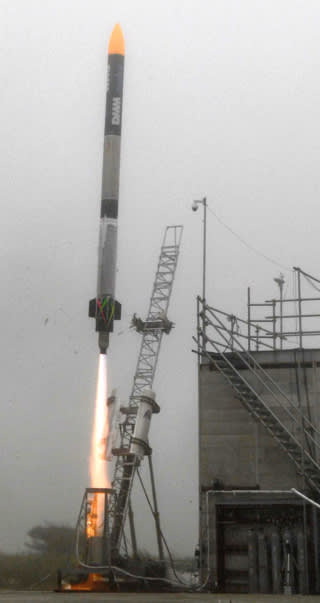 The Momo's flight lasted barely more than a minute.

The rocket was launched Sunday from the town of Taiki in southern Hokkaido at 4:32 p.m. But the craft fell into the sea when the engine was halted after a communications failure.

Japanese entrepreneur Takafumi Horie, a founder of rocket developer Interstellar Technologies, already is looking to the future, saying "a successor will be developed in three months."

Company CEO Takahiro Inagawa said the rocket could not breach Earth's atmosphere because of "damage to the craft." The flight was normal directly following the launch, but the frame apparently took damage 66 seconds later after the rocket broke the sound barrier. With wiring and other equipment destroyed, communication was lost, triggering an emergency stop to the engine.

The rocket reached an altitude of about 10km and landed in the ocean around 6.5km off the coast.

The Momo, which stands at a modest 10 meters, was designed to reach an altitude of 100km four minutes after liftoff. The launch was intended to collect information on the rocket's behavior as it approached space.

"We did not reach space, but we are satisfied that we got data on the rocket," Inagawa said.

Trouble has plagued the rocket project, which has seen a launch postponed four times. The Momo was ready to lift off Saturday morning, but bad weather and equipment problems forced a delay to the following day. Problems with a fuel tank valve and a control board pushed the planned morning launch into the afternoon.

However, the rocket's engine and attitude control system were tested successfully. An investigation will seek the cause of the damage to the frame, helping Interstellar toward its goal of launching a next-generation rocket in 2020.