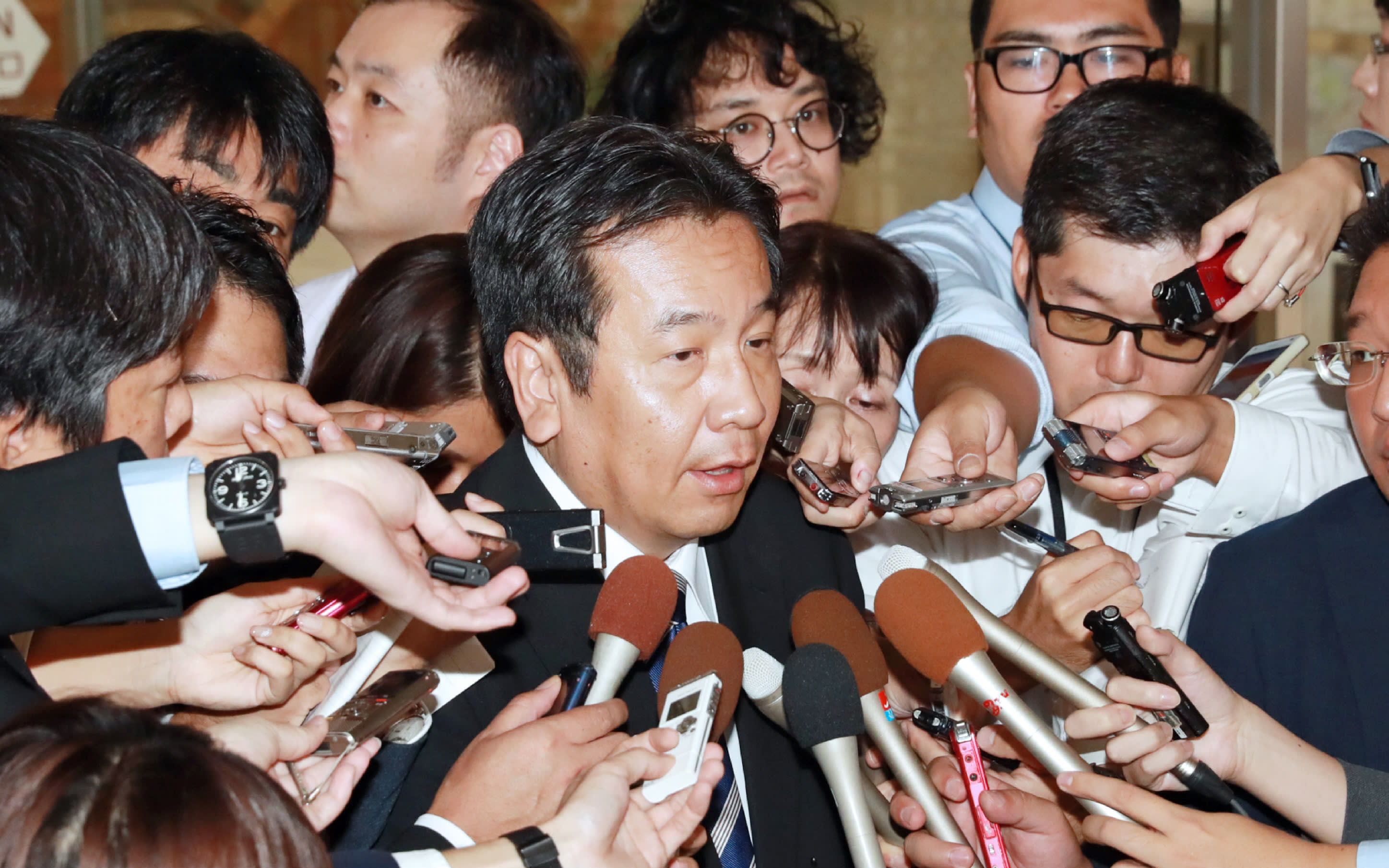 Yukio Edano, Democratic Party Deputy President, talks to reporters after visiting the headquarters of the Japanese Trade Union Confederation, or Rengo, in Tokyo on Monday. (Photo by Nozomu Ogawa)
Japan-Update

Democratic Party leader Seiji Maehara's initial plans called for all members to abandon the label and run under Koike's Kibo no To, or Party of Hope, in the Oct. 22 lower-house parliamentary election. However, Koike made it clear she intends to be more selective, essentially excluding the liberal factions of the party.

The move prompted Edano's plan for a new party in order to accommodate the rejected lawmakers.

The Party of Hope insists that any Democrats seeking its endorsement in the lower house election must sign a policy agreement consisting of eight items, including support for the contentious 2015 security legislation, constitutional revision, opposition to voting rights for foreign citizens and support for freezing the consumption tax hike planned for October 2019. The agreement also stipulates that candidates must support Party of Hope's manifesto.

Democrats who could be excluded had complained that they had initially been told the party would accept any Democratic lawmaker.

"All that remains is fleshing out a few practical details," Edano told Democratic Party members on Monday.

Edano held a meeting on Monday with Rikio Kozu, head of the Japanese Trade Union Confederation, or Rengo -- Japan's largest labor organization and the Democrats' biggest backer -- to ask for its endorsement. "I spoke about my feelings, my thoughts and the direction I intend to take," Edano told reporters after the meeting.

"We should not take away the voting option for those with liberal inclinations. [Therefore] we need to create a party which has a liberal at the helm," said Hirotaka Akamatsu, member of the Democratic Party and the former vice-speaker of the House of Representatives

Akamatsu told reporters on Monday of his intent to join Edano's party. Other notable party members such as Akira Nagatsuma and Kiyomi Tsujimoto, as well as upper house Democratic Party members, are said to be looking to join the new party.

The Democratic Party's Maehara decided last week to a de facto merger with Koike's new party in the hope of unifying the opposition and garnering protest votes against Prime Minister Shinzo Abe. However, those votes could now be divided between the Party of Hope and Edano's party, which would be a blow for both.