TOKYO/AOMORI -- Japan's central government is finding itself in a bind over its long-standing nuclear fuel cycle policy, due to repeated delays in the completion of a key facility, two and a half decades after construction work began.

The policy suffered another setback recently as Japan Nuclear Fuel Ltd. unveiled plans to delay by three years the completion of its spent-nuclear-fuel reprocessing plant under construction in the Aomori Prefecture village of Rokkasho.

Construction work on the plant began in 1993, with completion initially planned for 1997. Almost 25 years later, the plant has yet to go online, despite the more than 2 trillion yen ($17.9 billion) that has already been spent.

Japan is resource-poor and imports almost all of its oil, mostly from the politically volatile Middle East. The country has pinned its hopes on the nuclear fuel cycle policy to enhance its energy self-sufficiency.

The policy specifically calls for reprocessing spent fuel from nuclear power plants, extracting the plutonium and uranium, and recycling them as nuclear fuel.

It faces another major problem. Even if the reprocessing plant eventually goes online, it is still unclear whether Japan will be able to consume all the plutonium extracted from the spent fuel.

Hiroshige Seko, Japan's minister of economy, trade and industry, visited the reprocessing plant construction site in Rokkasho on Sept. 20, 2017, and criticized JNFL's poor management of the plant and other facilities.

"It is quite regrettable. You should take it very seriously," Seko told JNFL President Kenji Kudo. In response, Kudo bowed and said, "I apologize deeply."

Seko's visit to the plant came soon after two serious incidents at JNFL's facilities in Rokkasho.

In August 2017, rainwater leaked into a building housing an emergency power source. In early September 2017, three holes caused by corrosion were found in exhaust air ducts in the plant.

The Nuclear Regulation Authority, Japan's nuclear watchdog, suspended its safety inspections of the reprocessing plant in response to the spate of troubles there.

The NRA's move raised renewed concerns over JNFL's sloppy management of the facility and forced the company to revise its target of completing the plant in the first half of fiscal 2018.

JNFL announced another delay in the completion of the plant on Dec. 22, 2017, but there is no guarantee that the plant will be completed during the first half of fiscal 2021 as currently planned.

There are many reasons for the repeated delays in the construction project. The plant's design continued to be reviewed in the first place.

JNFL also faced technological challenges. The project was hit by a spate of troubles caused by the company's insufficient expertise in the use of glass to solidify liquid waste generated through the reprocessing process.

Flaws in the welding and earthquake-resistant design process also emerged.

The NRA introduced tough new safety standards in the wake of the Fukushima nuclear disaster, which was triggered by a massive earthquake and tsunami that hit northeastern Japan on March 11, 2011.

Under the new standards, it has become even more difficult for nuclear facilities to pass safety inspections by the NRA. The Rokkasho plant must also get the green light from the nuclear regulator before it starts operations.

On Sept. 19, 2017 -- a day before his visit to the plant -- Seko met with Aomori Pref. Gov. Shingo Mimura and other local officials and reiterated the government's firm commitment to its nuclear fuel cycle policy.

But there is growing distrust of JNFL among locals. "If the situation remains unchanged, more people will say that nuclear power and the nuclear fuel cycle policy are no longer necessary," said one local businessman.

Japan has good reasons to keep the plant construction project alive. If Japan pulls the plug on the project, the government's nuclear power policy itself could come to a standstill.

The worst-case scenario for the central government and electric power companies would be the abandonment of the nuclear fuel cycle policy, which would trigger local calls to return the approximately 3,000 tons of spent nuclear fuel brought into Aomori Prefecture so far. 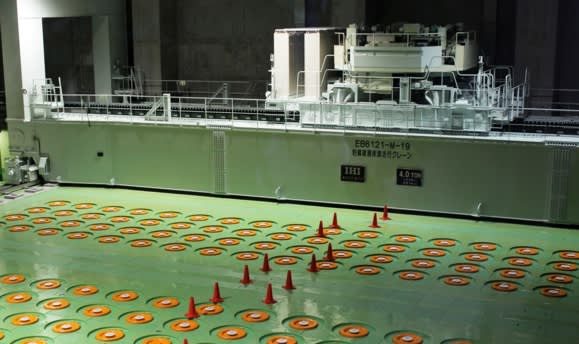 High-level radioactive waste is stored in a JNFL facility near the reprocessing plant building site in Rokkasho, in this photo from March 2015.

Nuclear fuel reprocessed in Rokkasho is supposed to be delivered to nuclear power plants. If the policy is abandoned, concerns will grow locally that Aomori, located in northeastern Japan, might be made a final disposal site for spent nuclear fuel.

If electric utilities agree to take back spent nuclear fuel from Aomori, their nuclear power plants in various parts of the country will be inundated with piles of spent fuel. As a result, it will become even more difficult for many nuclear power plants to go back online.

The nuclear fuel cycle policy suffered a serious setback in 2016, when the government decided to decommission the prototype Monju fast-breeder reactor in Tsuruga, Fukui Prefecture, in central Japan.

Monju had long been positioned as a pillar of the nuclear fuel cycle policy along with the reprocessing plant in Rokkasho.

The reactor started operations in 1994, but was shut down due to a sodium leak and subsequent fire in 1995. It was also hit by a spate of safety problems such as insufficient checks, resulting in its decommissioning after being offline during most of its existence.

After almost 25 years, the Rokkasho plant's buildings and components are aging. Unless extensive renovation work is done, the plant will likely continue to be plagued by troubles.

JNFL estimates its safety upgrades at the plant will cost 700 billion yen. But if future checks find that other parts of the plant need refurbishing, JNFL will have to spend even more.

Some observers also said that JNFL has many employees on loan from major electric power companies and does not have a strong attachment to local communities.

Even if the construction project goes smoothly, another major problem looms, casting a shadow over the nuclear fuel cycle policy. 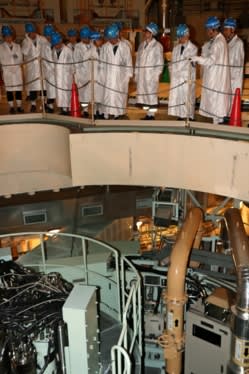 Officials gather Inside the prototype Monju fast-breeder reactor in this photo from May 2017. The government has decided to decommission the facility.

The completion of the plant will lead to an increase in the volume of plutonium, which can also be used to make nuclear weapons. If the plant operates at full capacity, 8 tons of plutonium will be extracted every year.

Most of Japan's nuclear power plants remain shut down because of safety concerns in the wake of the 2011 Fukushima disaster. Unless many of them are brought back online, Japan will not be able to consume all the plutonium extracted at the Rokkasho plant.

Japan is the world's only non-nuclear power that is allowed to reprocess spent nuclear fuel for peaceful civilian purposes.

But if Japan's stockpile of plutonium increases without any prospect of being used, the nation's reprocessing project could come under suspicion in the international community.

The future of the plant is still unclear. In any case, the nuclear fuel cycle policy faces a bumpy road ahead. If nothing changes, the central government's responsibility will be called into question.