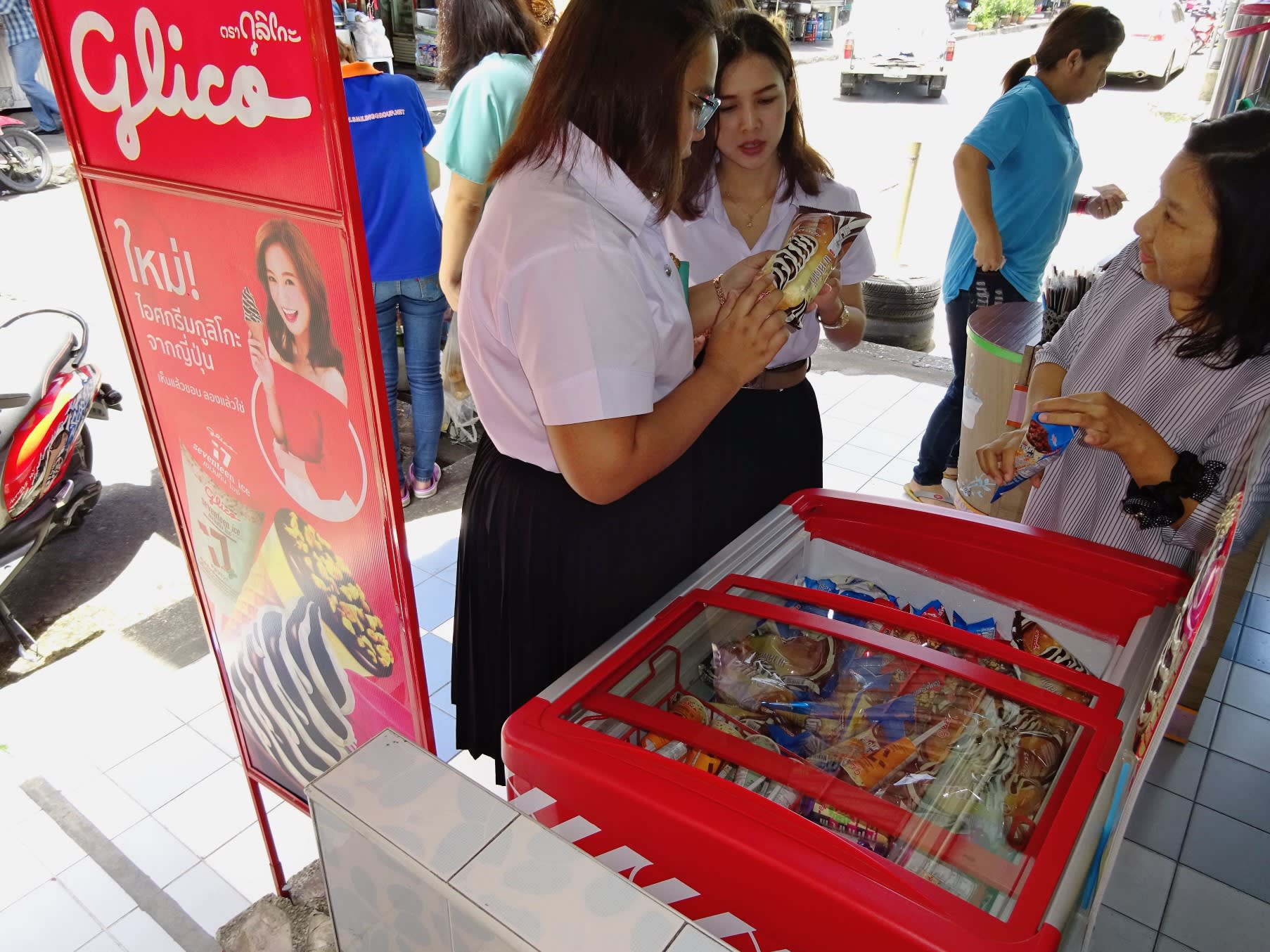 Ezaki Glico sells eight frozen desserts in freezers like this one in Thailand.

BANGKOK -- The Southeast Asian market for frozen desserts is warming as Japanese companies get on the stick to catch up with European giants.

But in markets where modern retailers like supermarkets have yet to fully take root, success depends on building sales via mom-and-pop stores and other small retailers.

A hair salon about a 30-minute drive from central Bangkok hosts a freezer filled with products from Japan's Ezaki Glico. This place sells more than 300 pieces of frozen desserts weekly. A 21-year-old college student picked a Palitte, a signature soft cream enfolded with crunchy chocolate, citing the not-too-sweet taste and new type of texture.

Ezaki Glico introduced eight products to Thailand in January under four brands -- including the mainstay Giant Cone -- for the confectioner's first overseas sales of frozen desserts, with production outsourced to a Thai manufacturer. The company also plans production and sales in Indonesia this year.

Their arrival challenges European players far ahead of the game. Anglo-Dutch company Unilever entered Thailand back in 1989, and Nestle of Switzerland followed suit in 1993. Unilever acquired a Dutch dairy giant's Thai operations in 1992 and now controls nearly 60% of the Southeast Asian market. Nestle holds about a 15% chunk in the region.

Their Thai offerings cover prices from 10 baht (29 cents) that children can afford to items costing over 40 baht, appealing to a broad range of customers.

But product appeal alone is not enough to increase sales. Though convenience stores are increasingly common in the region, mass retailers like large supermarkets remain scarce. Working with small, family-operated retailers is crucial to developing sales channels. "There is demand for our products, but it is essential to cultivate locally rooted sales channels," said Kiyotaka Shimamori, head of Glico Frozen (Thailand).

About 2,000 stores carry Ezaki Glico products in and near Bangkok, half of them supermarkets and convenience stores such as 7-Eleven, run by CP All. This highlights the ample room for expansion via freezer placement at small retailers. The freezer at the hair salon fits with efforts to cultivate local sales channels.

But Unilever and Nestle are far ahead in this regard, too, focusing on mobile vendors. Both companies have sales agents that hire and manage mobile vendors. They grant a sales license for each area and pay bonuses worth a few percent of sales when vendors exceed monthly quotas. This system has helped the European giants extend their reach beyond areas with stores carrying their products.

Japanese companies have just begun to battle. "We want a 20% market share in Thailand as soon as possible," Shimamori said.

Japanese food companies eye Southeast Asia for their icy offerings not only due to an economy supported by the growing ranks of the middle class but also because the development of refrigerated logistics facilities reduces barriers to entry.

Logistics company Konoike Transport, seafood and meat trader Yokohama Reito and frozen food maker Nichirei from Japan have been cultivating such logistics networks in Southeast Asia. With the distribution infrastructure developing, more food companies are accelerating expansion in the region and fueling competition.