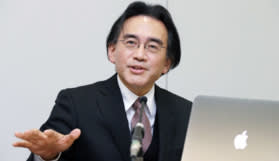 The Japanese company plans to re-create games for the Nintendo 3DS portable system based on past titles and smartphone offerings. Keeping development costs low will enable it to provide the content at prices as low as several hundred yen.

Free trial versions will also be increased. The idea is to boost the name recognition of new titles and drive purchases of the full versions by letting people play the first stages gratis.

Christmas sales were sluggish as an improved 3DS allowing better viewing of three-dimensional graphics would not debut in the U.S. and Europe until after the start of the year, Iwata said.

Despite calls to stimulate sales by cutting game system prices, he stressed that Nintendo has no plans to do so.

"We aim to return to profit levels more typical of the company in the year ending March 2017," Iwata said, suggesting that the market and shareholders anticipate 100 billion yen ($845 million).