On Sept. 22, Zhou Borun, 30, a self-employed businessman from Beijing, rented a Nissan Serena minivan at a Nippon Rent-A-Car outlet near Haneda Airport in Tokyo. He, his wife, daughter and both sets of parents had just arrived in Japan, fresh off a four-hour flight.

The seven of them then set off for Karuizawa, a popular mountain resort town about two and half hours away from central Tokyo. The eight-seater Zhou booked online cost about 100,000 yen (about $895) for the period. He said driving would be easier than taking a bus or train, especially considering that the grandparents are all in their 60s. Driving licenses issued in China cannot be used in Japan, but Zhou has an international driving permit from when he lived and worked in the Philippines. "I'm not nervous [driving in Japan for the first time]," he said, "but I will be very careful."

Nippon Rent-A-Car's Haneda outlet gets around 100 overseas drivers a month, 10% of all its customers, according to manager Daisuke Sato. "We are seeing many more from Hong Kong, Taiwan, South Korea and now from Thailand," he said. "Most of them rent for a week or so, and some even for a month."

While the car rental shop is gaining new business from all the foreign tourists coming to Japan, around 5% of them get into accidents. "We haven't had any fatal accidents," Sato said, "but the increasing number of crashes has been quite a concern for us."

In Japan, overseas visitors with international driving permits issued by countries that are signatories to the Geneva Convention can drive. The list of countries includes South Korea, Thailand, Singapore and the Philippines. And visitors from places that Japan recognizes as having similar licensing standards, such as Taiwan, can drive with the license they got at home and a translation document. More travelers to Japan are deciding to see the sights by driving to them in rental vehicles. (Photo by Tsubasa Suruga)

In 2015, 705,000 overseas visitors rented cars in Japan, a fourfold increase from 2011, according to a survey by the Ministry of Land, Infrastructure, Transport and Tourism. Meanwhile, accidents involving rental cars that lead to deaths and injuries are on the rise. There were 81 such cases in 2016, up from 62 in 2015, according to the Institute for Traffic Accident Research and Data Analysis.

A fatal case this year occurred on May 12 in Osaka, on the island where Kansai International Airport is located. The rented minivan that was carrying a family of five from China hit an out of service shuttle bus from behind, then crashed into a tree. One of the five, a 60-year-old woman, died.

It was the last day of a five-day trip to Japan. Driven by a 31-year-old man, the son-in-law of the woman, the minivan was to be returned before their flight later that day. Though the cause of the crash is still under investigation, the bus was driving under the legal speed limit of 60kph. According to airport police, the van is likely to have been traveling "at a very high speed." The road is straight with good visibility, and there have been few accidents nearby, police added.

The island prefecture of Okinawa last year saw 9,648 rental car accidents involving overseas visitors, a threefold surge from 2014. "About 4% of overseas drivers get into accidents," a representative from the prefectural rental car association told the Nikkei Asian Review. "And that is a much higher rate than that for domestic travelers," although he added that only the rate for overseas drivers is kept.

As for fatal accidents, the representative cited drivers who suddenly stop on highways when they nearly miss their exit ramp because of difficulty reading signs, which are in Japanese and English. He also pointed out that many overseas drivers are used to driving on the right-hand side of the road in their home countries. In Japan, drivers use the left side of the road, and the steering wheel is on the right side of the car. 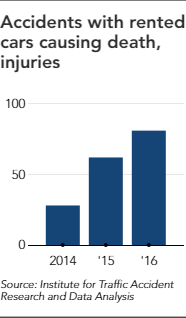 Now, Japanese authorities and rental car operators are trying to address the issue.

This month, the transport ministry selected five airports and surrounding areas where a lot of overseas visitors rent cars -- Okinawa, Sapporo, Nagoya, Osaka and Fukuoka. It will conduct a data analysis to find out what stretches of roads have a higher risk of accidents and why. It will then take measures, like erecting colored pictograms and multilingual road signs.

Data will be collected via the electronic toll collection consoles mounted in rental cars. This will allow researchers to pinpoint spots where foreigners suddenly hit the brakes. More that 300 test cars are already operating.

So far, on the southwestern island of Kyushu, authorities have been able to spot stretches of roads that have higher concentrations of overseas drivers looking for parking spots -- an activity that could lead to accidents should drivers take their eyes off the road.

Meanwhile, a rental car association in Japan's northern Tohoku region this month began distributing tablets installed with a multilingual app catering to visitors. In addition to giving directions in English, Chinese and Korean, the Drive@TOHOKU app describes traffic rules and road signs as well as how to fill the tank with gas at self-service outlets.

Annual overseas visitors to Japan hit the 20 million threshold on Sept. 15, 45 days earlier than last year, according to the Japan Tourism Agency. Meanwhile, renting cars is expected to become even more popular among tourists. To ensure better experiences, they will need better guidance -- and to drive safely.