"Why shouldn't a Chinese female author write about the British elite, including their sexual habits?" says Chinese-born novelist Hong Ying. "A writer is a writer, and there should be no distinction between genders.” (Courtesy of Hong Ying)
HUMPHREY HAWKSLEY, Contributing writerMarch 3, 2021 08:00 JST | China
CopyCopied

I first met the Chinese writer Hong Ying many years ago in a fashionable bookstore in London's upmarket Chelsea district. She was surrounded by literary stars and critics, looking a little tense, yet somehow pensive, elegant, patient. A blend of curiosity and bewilderment creased her face while, just beneath, there was an expression best described as a hard-as-nails vigilance.

The gathering was during the bubbling optimism of the late 1990s; the Cold War was over, and the world was opening up. Hong Ying was launching "Daughter of the River," her first autobiographical account of her childhood in a crime riddled Yangtse River slum, about as far removed from the Chelsea chattering classes as you could get.

Her mother was married to a malicious Chongqing gangster, then later to a more caring Yangtze River boatman. Neither man was her father; Hong Ying was the result of her mother's affair with a man she was not even aware of until she was 18.

Hong Ying grew up with a sense of being an unwanted outsider, but did not know why. Her family was impoverished and dysfunctional.

"I was bullied by my classmates, who called my mother a 'bad woman,'" she told me in a recent interview. "I was an outsider in my own family. I had to be stronger than a boy. In this way, I have never regarded myself as normal. I was a woman who had to survive on my own."

One indelible childhood memory is of floating corpses during China's Cultural Revolution.

"I often saw people running to the river and jumping in to commit suicide. I found the floating bodies very strange. Women were always face up, while men were all face down."

In 1989, she got away. Bright, driven, and with an instinct for survival, she studied briefly at two universities, and in 1991 managed to move to London where she married and wrote her first novel, "Summer of Betrayal," about love, infidelity and escape.

The marriage did not last, but Hong Ying is now a British citizen and has married again, straddling two cultures. I was keen to hear her thoughts on the changes in the West's view of China, whether the warm embrace she had felt nearly a quarter of a century ago had become cooler or more complex and, if so, why. 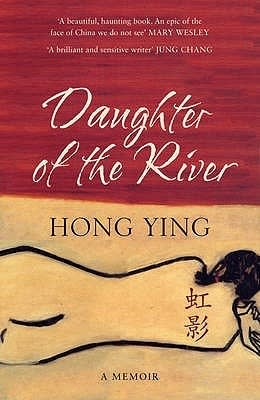 Raw and unfiltered, "Daughter of the River" made Hong Ying a superstar in China. (Courtesy of Hong Ying)

"China's view of the West is based on nationalism," she said. "Western views on China are based on criticism. Westerners who think they are open-minded seem to have an impression of China entangled in the past. The main problem is that there are too few translations of Chinese literature into foreign languages."

"Daughter of the River" became an immediate bestseller. Hong Ying had little formal education, and the book's unfiltered rawness set it apart from other commercial successes such as China-born Jung Chang's "Wild Swans" and "The Joy Luck Club," by the Chinese American author Amy Tan, which had begun shining a spotlight on China for Western readers.

The novel also hit a nerve in Asia, winning one of Taiwan's top literary awards in 1997, and attracting two rival publishers in China, one of which put out the original text and the other a censored version. Hong Ying became a superstar in her homeland. Fans lined the streets outside bookstores and packed lecture venues.

"I speak of the lives of ordinary people at the bottom rungs of China," she said. "Readers were shouting, 'Hong Ying, you've written our story!'"

She has gone on to write myriad books, including a second autobiography, "Good Children of the Flower," which begins with her mother's death and family acrimony. 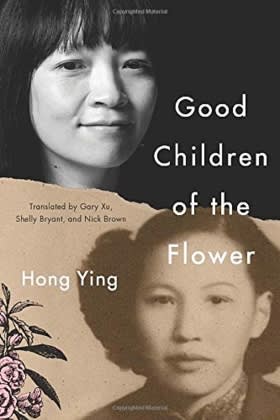 "What kind of loveless life did my mother and my sisters live?" she said as if thinking aloud. "In this book, I told the whole story of my life after leaving China for England and returning to China again: the pain of my marriage after I arrived in England, the despair I could not express in my words, and my desire for love -- love for a mother and love for a man."

She also spread her writing further afield to become embroiled in a headlong battle with the London publishing establishment in a cultural clash about feminism and sex.

"K: The Art of Love" tells the story of Julian Bell, son of Clive and Vanessa Bell, leading figures in the Bloomsbury Set -- a group of English artists and writers in the early 20th century. Hong Ying describes how Julian is coached in sexual prowess by an experienced Chinese lover. "K: The Art of Love" was initially banned in China for being too racy. (Courtesy of Hong Ying)

After several rejections, "K: The Art of Love" was picked up by a small publishing house and translated into numerous languages. In China, it was banned for being too racy, then given another name after which it was feverishly auctioned between rival publishers. Now titled "The English Lover," it has been described as China's "Lady Chatterley's Lover," a novel by D.H. Lawrence that was privately released in 1928 but not commercially published in full in the U.K. until 1960, when its publisher won a sensational court victory after being prosecuted for obscenity.

The success and controversy prompted Hong Ying to write two more books focused on women's rights, "The Concubine of Shanghai" and "Death in Shanghai," which was adapted for film in 2019 under the title "Saturday Fiction," starring China's Gong Li and Japan's Joe Odagiri.

Confined to London during the pandemic, she is now turning a short story into a film treatment and full-length novel. Her family life has changed dramatically. Hong Ying's mother fled her home at 17 and went on to endure unforgiving poverty; in contrast, her 13-year-old daughter goes to a private school -- but her writing themes remain familiar: crime and cruelty on the bottom rung of society. 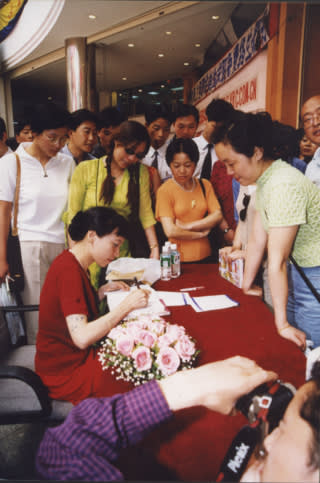 Hong Ying signs her bestselling memoir "Daughter of the River" at a bookstore in Chengdu in 2000. (Courtesy of Hong Ying)

So, how does she see her work now?

"I care particularly about changes in women's lives," she said, clenching both fists under her chin to make her point. "Women are learning that they do not have to pay the price, do not have to stay in a fixed place at the bottom of society, wasting their natural abilities. They know what goals they want to achieve."

But how does Hong Ying cross the cultures -- does she see herself mainly as Chinese or has she been Westernized?

"I think of myself as just a writer. I am neither one nor the other. I am lost in some twilight zone between. My content I think is universal, though when I write it down it's in Chinese characters. Can you work out where I fit? I'm still trying!"

Humphrey Hawksley is a novelist and Asia specialist. His next book, "Man on Fire," will be published in April.