THE HAGUE -- Are never-ending stories about refugees numbing us? Has the daily dose of official numbers and statistics about refugees reached a level of abstraction that makes individuals invisible?

These questions came to mind as I watched "Rohingya," a film by the dissident Chinese artist Ai Weiwei.

UNHCR, the U.N. relief agency, recently announced that the number of people fleeing wars, human rights abuses, violence and persecution had reached a record 82.4 million by the end of 2020. While headline stories about numbers register with many audiences, they mask myriad stories about personal tragedies, horror and loss of belonging.

Ai Weiwei has been working on issues of displacement and refugees for years. In installations, sculpture, architecture, photographs and film he has drawn attention to their plight. Born in China in 1957, as a child of forcefully displaced parents, the refugee in him has not tired. Loyal to the theme, he continues to highlight its powerful political aspects, while making sure that the people and their stories come to the foreground.

In his earlier film "Human Flow" (2017) Ai put a face on migration. He visited refugee camps around the world, and followed routes taken by hundreds of thousands of refugees since 2015, from the Middle East to Greece and across European borders.

"Rohingya" is set in the large refugee camps near Cox's Bazaar in Bangladesh that house close to 1 million Rohingya Muslims from Myanmar's Rakhine state. Most fled in 2017, when violent campaigns by the Myanmar military drove some 750,000 across the border. Almost four years later, they are still there. The military says the Rohingya are not Myanmar citizens, often referring to them as Bengali. 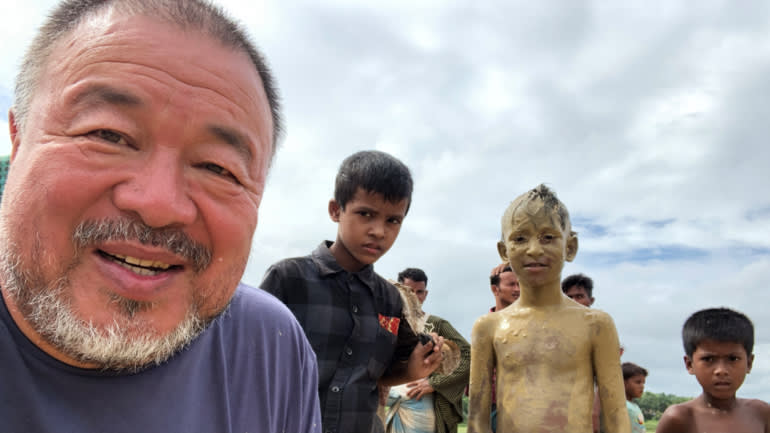 In the short to medium term, the prospects for their return to Myanmar are not good. Earlier this year, the country's military seized power -- the same military that drove out the Rohingya and is being investigated by both the International Criminal Court and the International Court of Justice, both based in The Hague, for alleged crimes against humanity.

"Rohingya" differs starkly from "Human Flow." It does not deal with the larger issues of displacement. Its focus is exclusively on the daily lives of the refugees. A lack of commentary and static camera shots force viewers to make their own assessments of what they are seeing, helped only by music that underlines the simplicity of the refugees' daily routines.

Ai played an important role in the earlier film, but in "Rohingya" he is invisible, as are humanitarian personnel, administrators, security guards, consultants and others who often occupy the foreground in stories about refugees. This film is not about them.

Absent too are numbers and statistics, needs assessments, screening processes, joint response plans and the hosts of acronyms that accompany international humanitarian efforts.

Over more than two hours, Ai shows the lives of the Rohingya in their camps, stringing together scenes of lives in tarpaulin-lined shacks, in learning centers, at distribution points, water pumps, markets and cemeteries. Life is harsh, but the daily struggle is not only about survival. It is also about maintaining customs and rituals, and about dignity.

Ordinary scenes are made special by the amount of time Ai gives to them. They are not rushed. That is why you remember them: school children learning to count to 100, in English; torrential rains that make pathways and alleys impassable; and the slaughter of a cow. The scene that struck me most shows two women quietly and tenderly preparing a young child for burial.

Throughout the film, the mood remains peaceful. There is a tranquility not normally associated with the Rohingya crisis. There are no references to the history of oppression in the homeland from which they fled. While each scene speaks for itself, together they bring out the routines and struggles that define not only the refugees' lives, but also their humanity, resourcefulness and resilience. Top: Rohingya children counting from 1 to 100 in English at an informal learning centre in Cox's Bazar refugee camp. Bottom: Bangladesh has been trying to move 100,000 Rohingya to Bhasan Char, a flood-prone island in the Ganges delta. (Images courtesy Ai Weiwei Studio)

Some critics might counter that the film is not sufficiently political, that it does not address the underlying causes that forced the Rohingya to seek refuge in Bangladesh. However, Ai has said that "any artwork, if it's relevant, is political, or otherwise is just some kind of decoration, or for money-making. Any art that is meaningful always talks about the human struggle."

"Rohingya" was filmed between 2016 and 2020, a time of great upheaval for the Rohingya. Although the film does not explicitly reflect on this, the community's painful history hovers in the background, even if largely invisible.

Filming of this documentary ended well before the end of 2020. Since then, the COVID-19 pandemic, monsoons, fires and criminal violence have contributed to worsening conditions among the Rohingya in Bangladesh, according to Refugees International, a U.S.-based non-profit organization.

In addition, Bangladesh has adopted an increasingly securitized approach to the refugees, including barbed-wire fencing around the camps in which they live, completed in early 2021. While Dhaka deserves credit for its efforts to host the Rohingya, the fenced-in camps now resemble detention centers, making the refugees even more vulnerable. In May, close to 50,000 people were displaced by a large fire. Some died because fences blocked their escape.

Bangladesh has been trying to move 100,000 Rohingya from the camp to Bhasan Char, a flood-prone island in the Ganges delta. But the refugees are resisting. They fear for their safety in a country that evacuates millions of people along its coastline before annual monsoon storms arrive. To where would those on Bhasan Char flee?

Moreover, many refugees want to stay in the existing camps because that is where they have built extended networks and because it is close to the border with Myanmar.

Jessica Olney, a visiting researcher at Dhaka-based Brac University, and Shabbir Ahmad, a resident of one of the refugee camps, said in a recent article in Just Security, a U.S.-based website specializing in security and legal issues, that refugees in Cox's Bazaar fear that the political situation in Myanmar will worsen their prospects. 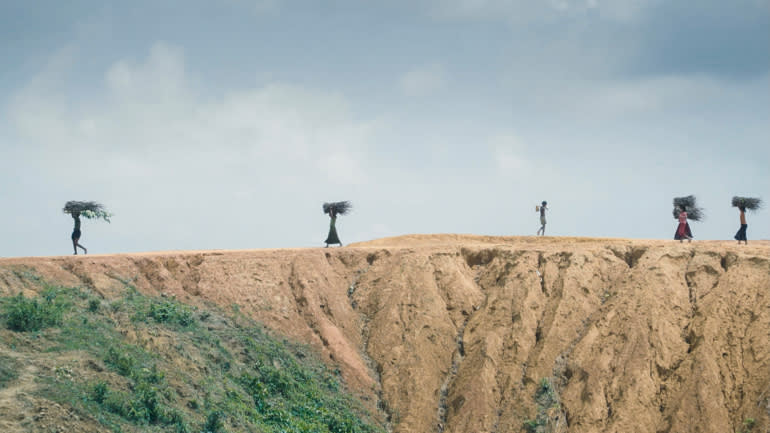 Top: Filmed between 2016 and 2020, "Rohingya," Ai shows the lives of the Rohingya in their camps for over two hours. Bottom: A lack of commentary and static camera shots force viewers to make their own assessments of the simplicity of the refugees' daily routines. (Images courtesy Ai Weiwei Studio)

"The greatest fear for many camp residents is that repatriation at a large scale will be impossible as long as Myanmar remains under the control of the military," wrote Olney and Ahmad.

The leader of the new military regime Min Aung Hlaing affirmed these fears in a May 24 interview with Reuters, confirming that the military recognizes neither the identity of the Rohingya people nor their right to return to Myanmar.

However, support for the Rohingya is growing among opponents of the military regime. On June 3, the parallel National Unity Government, a body representing the ousted National League for Democracy government, elected lawmakers and key anti-regime figures, issued a policy paper on the Rohingya that many lauded as a breakthrough. It states that the NUG plans to repeal Myanmar's discriminatory 1982 citizenship law when democratic civilian government is restored.

This, and increasing evidence of solidarity with the Rohingya among formerly apathetic members of Myanmar's majority Burman population, open prospects for a return of the Rohingya as citizens of Myanmar and with full rights. But violence and instability resulting from the coup will almost certainly delay prospects of repatriation.

There is a scene in "Rohingya" that is difficult to forget. It shows a boy standing in front of a shelter. He is wet, probably from the monsoon rains. He looks around, anguished. Perhaps he does not know where he is or where he is going. The camera stays with him, but so does the distress. He personifies what so many refugees must deal with. Uncertainty, anguish, always looking over one's shoulder and not being able to trust anyone. In one short scene, Ai captures it all.

Laetitia van den Assum is a former Dutch ambassador and was a member of the Rakhine Commission set up by former U.N. Secretary-General Kofi Annan.

Ai Weiwei's film can be found on vimeo at https://vimeo.com/ondemand/aiwwrohingya