After 40 years, Joan Mirviss' US gallery is a game-changer for young Japanese artists TOKYO -- Joan Mirviss has always appreciated beauty found in the earth. As a five-year-old, she discovered a fossil in her yard in the U.S. state of Connecticut, and developed a yearning to study geology. A simultaneous fascination with Japan eventually led her to a different treasure from the earth: Japanese ceramics. The two interests have converged to make her one of the leading dealers of contemporary Japanese ceramics and fine art in the U.S.

Mirviss' passion for Japan grew from a childhood interest in copying pictures of Japanese kabuki actors and women in kimonos from a book, and a weekly TV show featuring an Asian man demonstrating brush painting. In the 1970s, while still in college, she traveled to Japan on a student trip. The only excursion available covered the art of Japanese ceramics, a subject in which she had little interest. The trip took Mirviss to most major pottery centers in Japan, meeting young artists and masters.

"It was an amazing trip and the serendipitous program later proved to be a defining inspiration in my future career," she recalled over afternoon tea in Tokyo. Her subsequent journey has taken her from finding that fossil in the mud to a life divided between tours to pottery kilns in Japan and her elegant gallery off Madison Avenue in upper Manhattan, New York. After a graduating with a master's degree in Japanese art history from Columbia University in the U.S., Mirviss began selling 17th-19th century Japanese paintings, screens and ukiyo-e (woodblock) prints at fairs and as a private dealer in New York.

Although dealing in period art and antiques, Mirviss was simultaneously drawn to contemporary Japanese ceramics, and quickly accumulated a sizable personal collection on frequent trips to Japan to buy art for her business. "I had developed an instinctive sense of the clay art form, and was most excited by artists who had their own very personal, yet very contemporary visions of ancient ceramic traditions," she said.

Mirviss was inspired to make ceramics a focus of her work in 1983 when she saw works by Shinobu Kawase at the Japan Ceramics Today exhibition at the Smithsonian Institution in Washington, D.C. The pieces came from the Tomo Kikuchi Collection and Mirviss eagerly arranged an introduction to the well-known Japanese art patron, "Madame" Tomo Kikuchi, "who had a passion for clay that influenced me deeply."

"I shyly asked her to introduce me to Kawase-san, the master of celadon (green glaze), who became the first ceramist with whom I had a friendship," Mirviss remembers.

Several years later Mirviss saw a show at the Tokyo Museum of Modern Art by Shoji Kamoda, a ceramicist whom she considers the greatest clay artist of the 20th century, and it touched her profoundly. "Here was an artist I wanted to introduce to America," Mirviss said. Prices for his masterworks were stratospheric, but when Mirviss' favorite piece from the show, "Purple Vase," became available a decade later she was ready. "In a boundless leap of faith, I paid what for me was a great deal of money and I realized my mind was made up. My purpose going forward would include inspiring and infusing others with my conviction and passion for Japanese contemporary ceramics. Luckily for me, my involvement with the people who create and collect ceramics happened simultaneously to a global acceptance of clay art," Mirviss said.

"In the West, dishware typically matches, and is acquired at one time from one source. In Japan, ceramics are acquired by a family over time, typically in groups of five, and never match. A host's taste and sensibility is measured by the selection, arrangement and presentation of collected pieces. 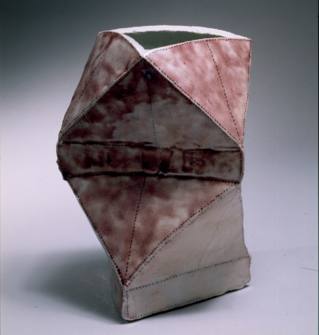 "The Purple Vase" by Shoji Kamoda (Photo by Richard Goodbody)

"Japan was fertile ground in which clay art could grow. At the end of the 20th century new technologies, a depth of skill and a burst of creativity brought Japanese ceramics from beyond function to an art that happens to be made of clay."

Mirviss noted that in the early 1980s contemporary ceramics were firmly rooted in tradition and functionality, and there was a distance to go before embracing change.

"In the 1990s, as international attention grew around Japanese ceramics, younger artists took greater risks," she said. "Clay art was able to transcend the notion of kogei, or craft, in which vessels are appreciated for their form, surface and functionality. Together with traditional ceramics, independent clay artists pursued a sculptural nonfunctional approach to clay."

Mirviss faced the challenge of how to turn an already successful antique art business into a similar success with clay art. She credits the emergence of global art and antique fairs with making a difference.

In the mid-1990s Mirviss began to organize solo exhibitions of Japanese clay art by recognized masters when she sold at shows such as the International Asian Art Fair in New York.

"Curators and sophisticated collectors in other media attended, and saw these new ceramics displayed with antique ceramics, fine art screens and ukiyo-e. Many curators and collectors who were already enthusiasts of ancient Chinese ceramics jumped on board. Academic and regional museums with limited funds realized they could start collections with a modest budget," Mirviss said. A piece by Satoko Fujikasa (Photo by Richard Goodbody)

By the time her business was acquiring serious momentum, about a decade ago, Mirviss had recognized the need to expand it to accommodate an avid following among collectors, museums and corporations. After opening her eponymous gallery in New York, she began creating a venue for clay artists, with a minimum of five exhibitions each year. "Opening the gallery meant that I could curate exhibitions, both solo and thematic," she said.

"Despite the downturn in the stock market in 2008, Japanese clay art was becoming the new hot area for collecting. Buying the work outright, rather than taking it on consignment, as was typical in Japan, not only showed my loyalty and support to each artist, but also assured me access to the best material. My clients -- the collectors and museums -- always know they are getting access to the very best I can offer."

She added: "Accelerated appreciation in the United States is reflected in the fact that in the 1980s there were only six museums that actively collected contemporary Japanese ceramics. Today there are over 50 museums in the United States alone acquiring in this burgeoning field. I was very fortunate to have entered this field at the right time."

Mirviss continues to advise and build collections for museums, major private collectors and corporations. Among her clients are Carol and Jeffrey Horvitz, owners of one of the finest U.S. collections of contemporary Japanese ceramics which form the basis of multiple exhibitions, loans and gifts to a score of U.S. museums. "Joan Mirviss embodies all the characteristics of the great art dealers of the past and present: passion, expertise and honesty," said Horvitz, a global investor whose passion for fine arts saw him awarded France's Chevalier de l'Ordre des Arts et des Lettres in March 2017.

"We started buying Japanese contemporary ceramics in January 2008. Were it not for Joan Mirviss we would have had only a few nice pieces instead of our collection of more than 900," he added.

Being invited to show at the Joan B. Mirviss LTD gallery is a game-changer for many Japanese artists, because it exposes their work to an open and enthusiastic audience beyond their home country. As in many fields, success in the U.S. often leads to increased attention in Japan.

In late November, the gallery had just finished showing the swirling ceramic art of Takayuki Sakiyama. "While my art is appreciated in Japan, the ability to show my work in the United States has enabled me to develop and grow beyond what I had expected," Sakiyama told the Nikkei Asian Review. His works, known for their striking, centrifugal forms, have been acquired by museums across the U.S. and France.

"I try to stay at the forefront of the field by finding young artists who will be the next stars in the art world," Mirviss said. "I love Fujikasa Satoko. She is a sculptor whose medium is clay. And I am also enthusiastic about Kino Satoshi, whose hand-made pieces are repositioning celadon and pushing the boundaries for porcelain. Both are under 35 years old and have huge careers ahead."

At her New York gallery one recent afternoon, as she prepared an upcoming exhibition of 40 Japanese works to commemorate her 40-year career as an art dealer, Mirviss spoke with passion about her commitment to the artists. "It has been an honor to know the artists and watch many of them come into their own and see all of them prosper. It adds meaning to my life. In one sense I feel that I have never had a choice in career path," she said. "It is quite possible that it chose me." Personified by her first major purchase, "Purple Vase," the spirit of a passionate collector is still a key motivating force. "[Although] it has greatly increased in value, it will always remain a treasured part of my personal collection," she said.