Young consumers with cash ready to splurge on Japanese content 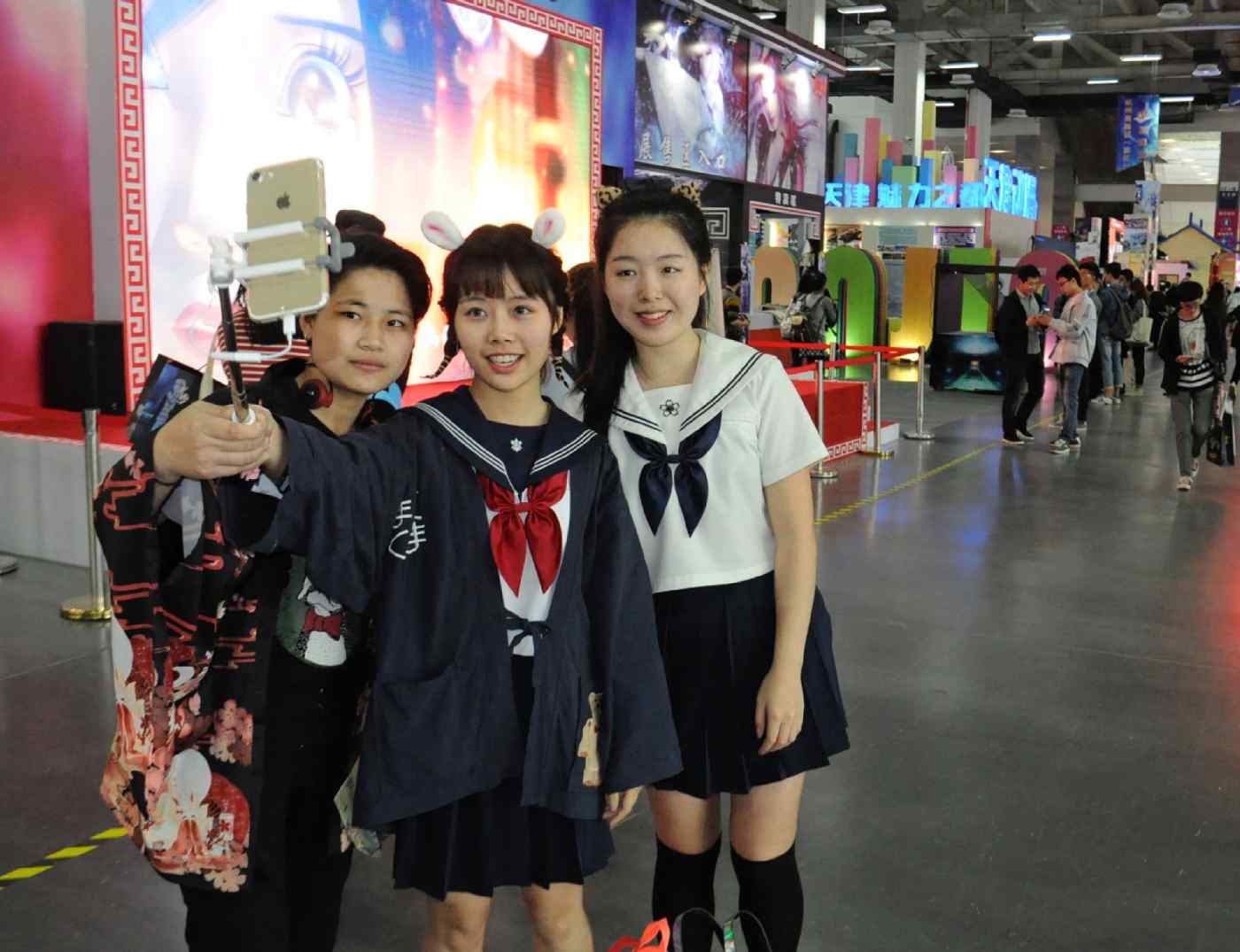 SHANGHAI -- China's blossoming anime and online game industry is creating opportunities for Chinese and Japanese businesses alike as fans in their teens and 20s open their wallets.

The China International Cartoon and Animation Festival in Hangzhou, Zhejiang Province, drew more than 1 million attendees before wrapping up Monday. Video-sharing website Bilibili, which distributes popular Japanese anime such as Kyoto Animation's "Miss Kobayashi's Dragon Maid," set up a stage for fans to dance to anime music. More than 2 billion yuan ($290 million) in goods and merchandise was sold at the event. One attendee had shelled out 300 yuan online for costume supplies just for the convention. Asked for a favorite anime, the 24-year-old hospital worker rattled off a string of titles, including "One Piece," "Detective Conan" and "Black Butler," apparently watched on sites like Bilibili.

Another convention, Comicup20, kicked off Sunday in Shanghai. This gathering for cosplayers and lovers of the fan-made comics known as doujinshi in Japanese attracted more hardcore fans. At one event, attendees dressed as characters from "Onmyoji," a mobile game from Chinese developer NetEase, sang and danced to the game's theme song.

"Onmyoji" is a role-playing game that has players step into the shoes of the titular practitioners of traditional Japanese magic and battle in a world where humans coexist with demons. The game includes voiced dialogue in Japanese -- with Chinese subtitles -- delivered by Japanese voice actors to give the game the right feel. 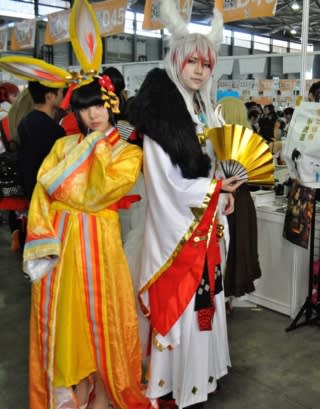 Fans at Comicup20 in Shanghai dressed as characters from the popular mobile game "Onmyoji."

"Onmyoji" was downloaded 8 million times in October through December alone, during which time NetEase raked in the equivalent of 15 billion yen ($134 million) from in-game purchases.

The incomes of most young Chinese are not particularly high. Even in Shanghai, new college graduates earn around 5,000 yuan a month on average. But many in their parents' generation bought real estate on the cheap from the government or employers back in the 1990s and are now reaping the benefits of surging property prices. Many young city-dwellers with easy lives devote themselves to hobbies and are willing to spend heavily on them.

China's animation market alone is expected to reach 150 billion yuan this year -- triple the 2010 figure and bigger than Japan's market.

Startups have been springing up in hopes of claiming a piece of this growing pie. DancingDigital Animation, a Jiangsu Province-based studio established in 2003, listed last spring on China's over-the-counter National Equities Exchange and Quotations board. The studio, which has 380 people working on production, has produced hits, including a popular children's cartoon on state-run China Central Television.

China aired the Japanese cartoon "Ikkyu-san" in the 1980s. This was followed in the 1990s by such popular titles as "Astro Boy" and "Doraemon," which inspired more than a few people to study Japanese. 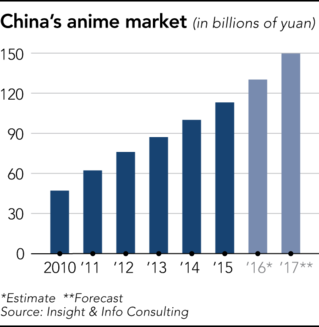 In recent years, the diplomatic chill between Beijing and Tokyo has led the Chinese government to ban some Japanese content from television. But fans simply turned to media that are tougher for the government to control, such as the internet and smartphones, and viewership is soaring. The popular "Attack on Titan," ostensibly banned for violent content, is distributed online under a different title.

"The amount of original content in China's anime [industry] is growing, but the influence of Japanese anime has always been extremely strong," said Qiao Jian at DancingDigital. The company has set up a branch in Japan and plans to import more content from the country.

Companies looking to turn the trend into a business opportunity are teaming up for joint Sino-Japanese projects. NTT Docomo has partnered with China Mobile, along with China Mobile group member Migu Comic, to develop a pair of virtual idols in the vein of Japan's Hatsune Miku. Content featuring the duo will be released simultaneously in Japan and China as early as July. "Ku-kai," a live-action film due out next year, is another cross-border production.

From piracy to politics

Though rampant piracy remains a problem in the industry, this is starting to change.

"There's still pirating, but the authorities are clamping down harder, and there's a growing trend toward paying for content," said Yukihiro Kashiwaguchi, CEO of Access Bright Japan, which distributed the hit film "Your Name" in China. This willingness to spend undoubtedly contributed to the film's 600 million yuan in Chinese box-office revenue, a record for a Japanese film.

But political risks remain as much of an issue as ever. Beijing's tacit blocking of South Korean dramas popular among young viewers is believed to stem from friction with Seoul over its planned deployment of an advanced U.S. missile defense system. The recent popularity of Japanese anime likely owes partly to less access to Korean works in China.