THIMPHU -- In the isolated mountain kingdom of Bhutan, where artistic endeavor is largely tied to traditional crafts, a studio set up by a group of volunteers has emerged as a flagship for contemporary art -- including challenging genres such as installations and videography.

Traditional artists working in areas such as needlework and goldsmithing often represent centuries of Bhutanese knowledge and skills, passed down through generations of artists. The National Institute of Zorig Chusum, the center for Bhutanese art education, recognizes 13 crafts, and provides 4-6 years of training in Bhutanese traditional art forms.

In the last two decades, however, the Voluntary Artists' Studio in Thimphu, popularly known as VAST, has become a driving force for contemporary art in the country, led by well-known Bhutanese artists such as Kama Wangdi, also known as Asha (Uncle) Kama, and Dorji Wangchuk.

Kama Wangdi, VAST's 59-year-old chairman, said artists have a major role to play in helping people to cope with change in Bhutan, which was an absolute monarchy until 2008 but has developed into a constitutional monarchy with competing political parties and an elected assembly. 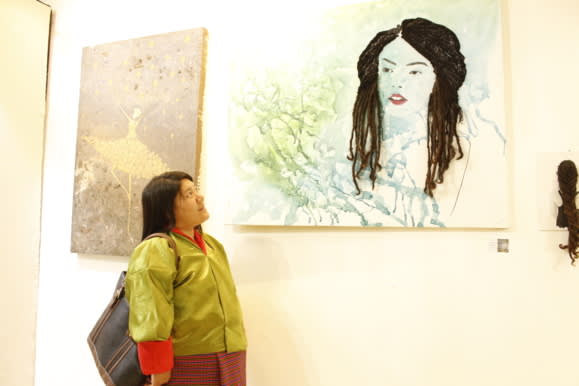 A visitor looks at at a painting by Kunzang Wangmo hanging in a recent exhibition. (Courtesy of VAST)

Kama Wangdi said contemporary art could help to preserve and conserve the culture of the Himalayan kingdom by introducing fresh influences that help to keep its traditions alive and relevant. The main themes of his own art are Bhutanese subjects and Buddhist iconography, which he paints using a combination of modern and traditional techniques.

Dorji Wangchuk, who describes himself on VAST's website as "the torch bearer of contemporary art in Bhutan," paints both traditional and contemporary subjects, and says he is "fully engaged in dedicating myself to the issue of Bhutanese contemporary art, and in helping the youth of Bhutan with support and dedication for the young and budding artists."

However, both said there need be no conflict between traditional and contemporary art. Kama Wangdi said that contemporary art can follow rules while also transcending them, which had helped to avoid conflict. "This, I feel, is ... one of VAST's highlight achievements," he said.

VAST was launched in 1998 by five artists, including Kama Wangdi, who wanted to explore opportunities for art. Kama Wangdi, who was already a successful artist, had started volunteering as an art teacher in government schools in 1997, but found that while many young people were interested they did not know where to start. VAST now has 80 members, including volunteers, artists and students, and plays a significant social role in Bhutanese life, as well as in promoting contemporary art, tutoring, and counseling more than 2,000 young people, including delinquents.

It runs socially useful and community building activities such as cleaning campaigns, is planning to offer art lessons to hospital patients and prison inmates, and has sent 24 students to art schools in countries such as India, Bangladesh and Pakistan.

VAST also does charity work. It has started a "Rice Bank" program that has benefitted 50 families in poverty; built two homes for families with sick members through a "Build a Home" project, and helped more than 100 needy or elderly people to attain long-cherished desires through a "Make a Wish" scheme. It's next major activity will be an "Art of Giving" event on Jan.13, in which donated artworks will be sold to raise money for charitable works.

Despite its efforts, however, VAST faces significant challenges. Kama Wangdi said there was a lack of understanding about art and its value. "This translates into lack of support for art, and also Bhutanese art lacks clear-cut direction. There is no overarching vision for art," he said.

Tshering Wangchuk, a 23-year-old animation and graphics graduate from India, and a volunteer at VAST, said the organization's values transcended its art. "Through art we are able to help the community. VAST is not just about art; it teaches you values," he said. "VAST is all about teamwork. I have gained knowledge and formed special bonds here."

Charmi Chheda, director of performing arts at Bhutan's education ministry, said VAST is playing an important role in the country's transition by engaging people from all levels of society in a creative process. "For instance, in many cases, drugs have been replaced by the paintbrush. VAST is representative of Bhutan's art," she said.

However, VAST executive director Chimi Zangmo said the organization's primary role was to help to develop art and creativity while the government concentrates on addressing poverty and infrastructure development, in line with the country's guiding principle of gross national happiness. GNH is an indicator of national prosperity that gives significant weight to personal contentment; Bhutan says it should replace the more widely-used gross domestic product index, which seeks to quantify the value of goods and services produced.

"Our concern is that by the time Bhutan becomes self-sufficient and matures in understanding the importance of art, we would have a society that lacks the core values of ... the GNH philosophy," Chimi Zangmo said. The philosophy "strongly advocates achieving a harmonious balance between the material and nonmaterial dimensions of development and the power of art and artistic expressions to help youth foster the values of contemplation, compassion and creativity," she added.