“The events are driven by a rejection of mainstream art,” says Thanom Chapakdee, one of the main forces behind the art-activism scene in northeastern Thailand. (Photo by Fabian Drahmoune)
FABIAN DRAHMOUNE, Contributing writerJanuary 9, 2021 08:00 JST | Thailand
CopyCopied

KHON KAEN, Thailand -- Inside an abandoned nightclub, a woman dressed in the white robe of a Buddhist nun stands laughing in front of a mirror. Around the corner, a trail of 112 raw chicken feet leads visitors into the ruins of a brothel that once housed sex workers from nearby Laos.

Both sites served as venues for Khon Kaen Manifesto, a subversive biennial art festival, held for the second time from Dec. 10 to Dec. 20 in the northeastern city of Khon Kaen.

"The hacked-off chicken feet symbolize the fact that people here have been cut off from their rights as citizens for too long," says Thanom Chapakdee, a retired art professor and the directing influence behind the festival. The number of chicken feet is a reference to Article 112 of Thailand's criminal code, an archaic defamation law that was recently used to charge pro-democracy activists with the crime of lese-majeste, or insulting the monarchy.

Artworks at the event and at Ubon Agenda, a sister festival held in November in the nearby province of Ubon Ratchathani, included site-specific installations, paintings, photography and several performances. Most openly addressed politics and protests by a youth-led movement calling for genuine democracy in Thailand, along with social change and an end to military meddling in politics. Emboldened by the protesters' open criticism of the monarchy, many works also examined the role of the institution in Thai society.

"In a country where artists have excelled in cryptic forms of political expression for so long, the art is really evolving and maturing in a really nice way," says David Teh, an associate professor at the National University of Singapore and author of a book on contemporary Thai art. Performance artist Wilawan Wiangthong, dressed as a Buddhist nun, switched between fits of laughter and crying in front of a mirror inscribed with the word “Compromise” for almost four hours. Her performance in the former Hell Club was a biting commentary on a recent statement by the king that Thailand was “the land of compromise.” (Photo by Fabian Drahmoune)

Artists at both festivals also used their work to channel calls for decentralization, which have grown louder in recent years, driven by long-simmering resentments in the northeast over the political dominance of Bangkok.

Setting the stage for a burgeoning contemporary art scene in the northeast, the two artist-run festivals and the opening of MAIELIE, an independent art space in Khon Kaen -- an offshoot of the MAIIAM Contemporary Art Museum in Chiang Mai, the largest city in Thailand's northern region -- are part of a wider push to decentralize and diversify Thailand's art world.

Gridthiya Gaweewong, artistic director of the Jim Thompson Art Center in Bangkok, says the emergence of alternative art festivals in the northeast is long overdue -- a similar movement energized the local art scene in the region around Chiang Mai in the 1990s. Thanaphat Toemsinthawi’s installation titled “III,” a reference to the youth movement’s adoption of the three-finger salute from the movie "The Hunger Games," addresses the state’s suppression of the anti-establishment protests. (Photo by Fabian Drahmoune)

"It's still all kind of rough and raw, unorganized, and you don't really know what's happening," she says about the two festivals in the northeast. Echoing that sentiment, some visitors to the festival said they were given little guidance to understand the local context of the events.

Perhaps befitting an underground arts event, there were no invitations, no press releases, no catalog, and the program of events was not readily available. Few of the artworks on display showed titles or even the names of the artists -- in part to maintain a collective spirit, the organizers say, and in part because of concerns about security given the critical nature of the works.

But the shows' edgy and outspokenly political artworks resonated with visitors, who traveled to the opening days from across the country.

Despite her criticisms, Gridthiya says: "I like the way it's all very site-specific and every venue has a story to tell that reflects the history of the northeast." 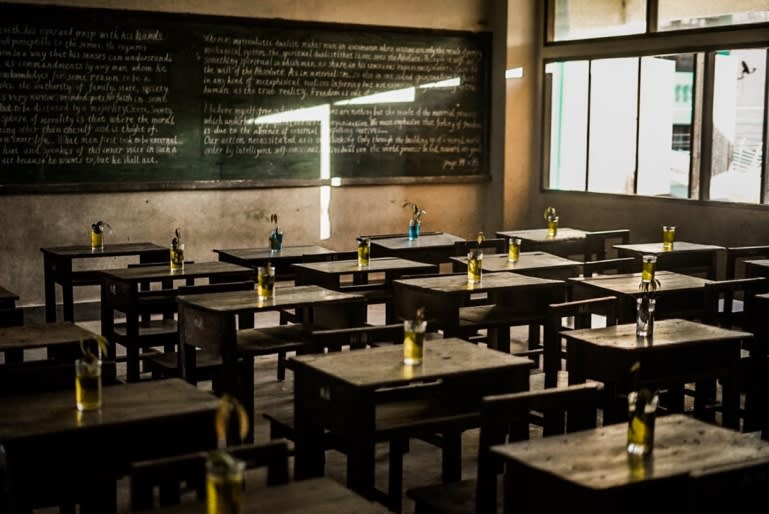 An old disco known as the Hell Club and the dilapidated former brothel served as primary venues for Khon Kaen Manifesto. Both were closed by the military junta that came to power in a coup in 2014.

Other venues included fringe galleries and the house of a student activist group that led early protests against the regime. Its most prominent member, Jatupat Boonpattararaksa, was imprisoned for more than two years for lese-majeste in 2016. He has recently been charged with the same offense for his participation in the latest protests.

The festival's inaugural edition was held in 2018 over a period of three weeks in an urban ruin -- an unfinished building intended to house a finance and securities company that fell victim to the 1997 Asian financial crisis. Nibhon Khankaew, artist and founder of Khon Kaen art space Huak Society, handed out calendars with the image of a rebellious Isaan monk who was arrested under the regime of Sarit in 1962. (Photo by Fabian Drahmoune)

Ubon Agenda took place in a shut-down school in downtown Ubon Ratchathani city. Set in a Christian community of Vietnamese refugees, many of whom did not receive Thai citizenship until the late 1990s, the location was a nod to the region's conflicted history in the 20th century.

Also known as Isaan, the northeast is Thailand's largest region and home to more than 22 million people, most of whom share cultural roots with nearby Laos and Cambodia. With a history of rebellion against the central state, including a communist insurgency during the Cold War, the region was long excluded from the country's economic development.

Military dictator Sarit Thanarat, who came to power in a coup in 1957, established Thailand as an ally of the U.S. in its global efforts to crush communism, and the northeast was chosen as the site for four American air force bases. The legacy of this period still affects the region, but has only recently become a source of inspiration for Thai artists. 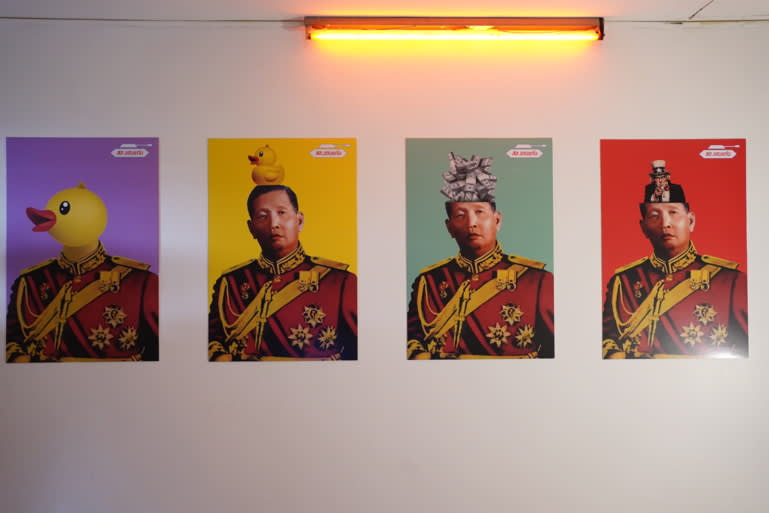 Artworks by Prakit Kobkijwattana poke fun at military dictator Sarit Thanarat who allied Thailand with the U.S. during the Cold War. (Photo by Fabian Drahmoune)

"It is [necessary] not only to revisit but also deconstruct the influence of this period, "because we see that the core problems of today are rooted in that time" says Gridthiya, who has led several art research projects on the topic.

The centralization of the country's contemporary art scene and the dominance of Bangkok-based art institutions such as Silapakorn University, a stronghold of conservatism, can be traced back to the same period. Most of the artists educated in these institutions go on to uphold the Thai state's focus on the nation, the Buddhist religion and the monarchy.

State-led decentralization efforts from the late 1990s had little success in fostering vibrant art scenes outside the capital, but a recent push to diversify the country's art landscape has been led by private collectors such as Eric Booth and his stepfather Jean-Michel Beurdeley, who founded the MAIIAM Contemporary Art Museum in 2016. The opening anchored Chiang Mai's dynamic but diffuse art scene and boosted international interest in artists from the region. Coinciding with this edition of Khon Kaen Manifesto, Booth launched MAIELIE -- meaning "brand new" in the region's Lao dialect -- in a scenic spot by Khon Kaen city's Kaen Nakhon Lake. Booth and his team hope the center will provide a platform for "contemporary artworks focusing on social and political engagement which addresses contested mainstream history in Thailand and beyond."

Art researcher David Teh applauds these efforts to decentralize the art scene away from the capital. "There's a very genuine readiness to start to take national diversity seriously and really devote resources to it," he says.

Pressure for diversification is also coming from outside Thailand as the international appetite for alternative art from Southeast Asia grows. Influential art magazines are increasingly covering art developments in previously neglected regions such as Isaan. 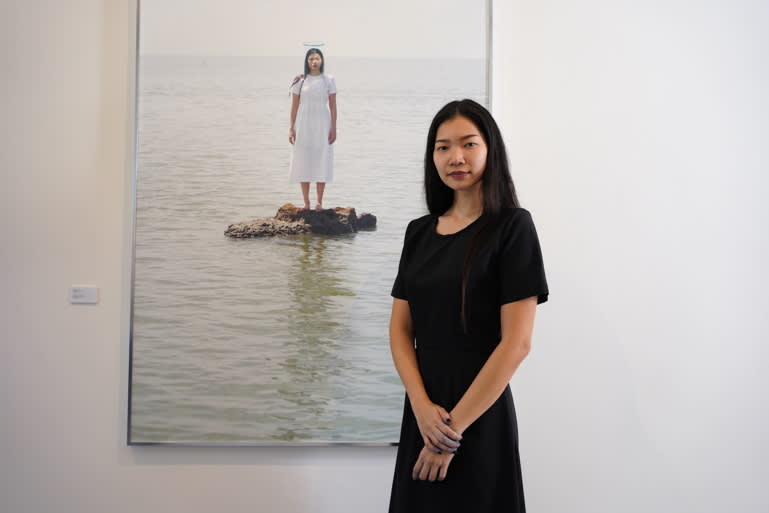 Chomphunut Phuttha, a performance artist from Khon Kaen born in 1994, performed at the opening of MAIELIE. The photo shows one of her performances in the south this year reflecting on emotional solitude during the pandemic. (Photo by Fabian Drahmoune)

"Bangkok today is still oblivious to the cultural wealth of the northeast," Teh says. "What's happening is that the intellectual world outside of Thailand is starting to valorize it in a way that the center is having to take notice."

At the same time, artists from the northeast who were forced to move to Bangkok or abroad due to lack of opportunities at home are also expressing hope and excitement about the burgeoning art community in their region.

Bussaraporn Thongchai, an artist from the northeastern province of Nakhon Phanom, has been living in Berlin for the past five years. When she returned on a trip in October to show her work on migrant sex workers in Germany at the Bangkok Art Biennale, she noticed the shift in Thailand's art scene away from the capital.

Bussaraporn jumped at an invitation to perform at the closing event of Khon Kaen Manifesto, and says the experience has revived a dream of opening an art studio in the northeast. The 35-year-old says she has long wanted to move back to Isaan, but saw little chance of surviving as an artist there, until now.

"I'm thrilled with everything that is happening artwise in Isaan," she says. "Finally there are new opportunities for artists outside of Bangkok, so we don't all have to flee from our homes."