BANGKOK -- When whistle-blowing anti-government protesters took to the streets of Bangkok from late 2013, among their number were a group of local artists who channeled their collective creativity into raising money for the protest movement.

Protest-inspired paintings, posters and T-shirts were sold and concerts performed in support of efforts by the People's Democratic Reform Committee, led by former Deputy Prime Minister Suthep Thaugsuban, to bring the government of Prime Minister Yingluck Shinawatra to its knees.

Sutee Kunavichyanont, a prominent Thai artist who has exhibited throughout the region over three decades, was one of those who lent his support, helping to establish "Art Lane" in the Chidlom Area, a focal point for likeminded artists committed to the cause. 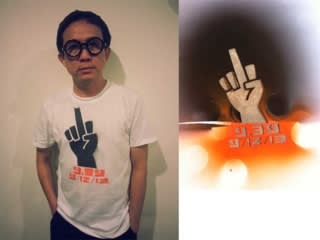 Thai artist Sutee Kunavichyanont wearing a T-shirt he designed in support of anti-government protests in Bangkok in 2013-14. (Photo courtesy of the artist)

Now, this aspect of Sutee's CV has come under scrutiny after his work was unveiled in early May as part of an exhibition at the Gwangju Museum of Art in South Korea, which, according to its curator, is based on "Asian democracy, human rights and peace," including an uprising against military rule in Gwangju in May 1980.

The exhibition, entitled "The Truth to Turn It Over," features four of Sutee's art works. Of these, a piece titled "Thai Uprising," featuring protest-themed posters and T-shirts based on those distributed during the 2013-14 rallies, has caused the Thai social media sphere to light up with debate.

Sutee's critics contend that his support for a movement that opposed elections, brought down an elected government and helped create the conditions for military intervention is hardly the hallmark of a champion of democracy. Yingluck was removed from office by the courts in May 2014, and her government was replaced by a junta in the ensuing coup.

This May, more than 100 Thai artists, activists and academics issued an open letter to the Gwangju museum expressing concern over the display of Sutee's work and the artist's "political standpoint."

"Rather than promoting democracy and civilian rule, his project at [the exhibition] recites his contribution to the recession of Thai democracy," the letter states, according to a transcript published by Prachatai, an online English-language Thai newspaper.

The statement adds: "We believe that freedom of expression is important for the artist, but we want to express our concern that Sutee's exhibition [is a] reversal [of] the spirit of the Gwangju Uprising."

Sutee, who also lectures at Silpakorn University, defended his work in an interview with the Nikkei Asian Review and sought to contextualize his support for the anti-government protests more than two years ago.

"The work ["Thai Uprising"] is a remake of what I produced before the military coup ... as part of a democratic movement," he said. "I protested the corrupt government and I protested [an] amnesty bill that was going to give pardons to criminals and corrupt politicians. I asked for democratic reform. I didn't ask for a military coup."

Sutee said he had raised money for the protest movement against Yingluck's government but was not a part of the PDRC, despite sharing some of its aims. These included opposing the amnesty bill, which would have waived convictions for political offenses dating back to 2004, opening the door for Yingluck's exiled brother Thaksin Shinawatra, another prime minister removed by a coup, to return to the country.

"Every side has their own agenda," he said of the artists' statement, which was attributed to a collective called the Cultural Activists for Democracy. "They will believe what they believe ... And they will do whatever [they can] to win. That is the thinking. They think I'm on the opposite [side]; I'm the enemy. Because [society] is so divided."

Lim Jong-young, curator at Gwangju Museum of Art, was clearly surprised to find himself at the center of a controversy underlining the complex and polarized nature of Thai politics.

"I didn't think about this situation [before] but now I've received many questions," he said. "I just focused on the medium, not the political situation. This kind of thing -- the T-shirts and the posters -- have never been displayed in our museum so I wanted to try to show this."

After considering the criticism, which included queries from Thai students based in South Korea, Lim said he had contacted the artist to propose that the controversial piece be removed from the exhibition. "I will discuss this with Sutee continuously. I think he will understand me... because we don't want to make a big problem for each country," he said.

Sutee is known for producing works stimulating commentary on Thai history and memory. In his 2013 "History Class" series (which has appeared in various iterations since 2000), audience members were invited to sit at a line of wooden school desks and use tracing paper to reveal a scene from Thai history.

Scenes included the "Black May" popular protests in 1992 against military rule, as well as depictions of students hanged during the Thammasat Massacre in October 1976. A more recent scene, referring to "Thaksinocracy," signaled the artist's views on the contemporary political scene.

Iola Lenzi is an art critic and lecturer based in Singapore who has curated and written on Sutee's work. She said much of it sought to "provoke questions and activate thinking, rather than adopting a position."

"Curating Sutee's art, and commissioning new works for exhibitions, I have consistently seen in Sutee's critical practice a fundamental respect for peoples' rights to decide ethical issues for themselves," she said. "Rather than assuming one or another ideological line, his pieces advance the idea that individuals take responsibility for their place in the world and their shaping of society."

For some observers however, Sutee's participation in the PDRC-aligned protests has irrevocably colored his work.

"It is obvious that Sutee's artworks and his peers in the Art Lane take a political standpoint that goes against the growing of democracy and human rights concerns in Thailand," said Yukti Mukdawijitra, an assistant professor in the Faculty of Sociology and Anthropology at Thammasat University, and one of the signatories of the letter issued by CAD.

The current climate in military-ruled Thailand is not conducive to politically charged art works. The military-led government has harassed critics and policed all outlets of free expression, from academic conferences, commemorations and performances to social media posts.

Despite the storm surrounding his latest work Sutee said he was not seeking to generate controversy. "I don't want to come out and make more conflict in the society," he said. "I think we already have enough. That's why I will wait and see what the government [will do]."