Creative posters and comics are helping people cope with the pandemic 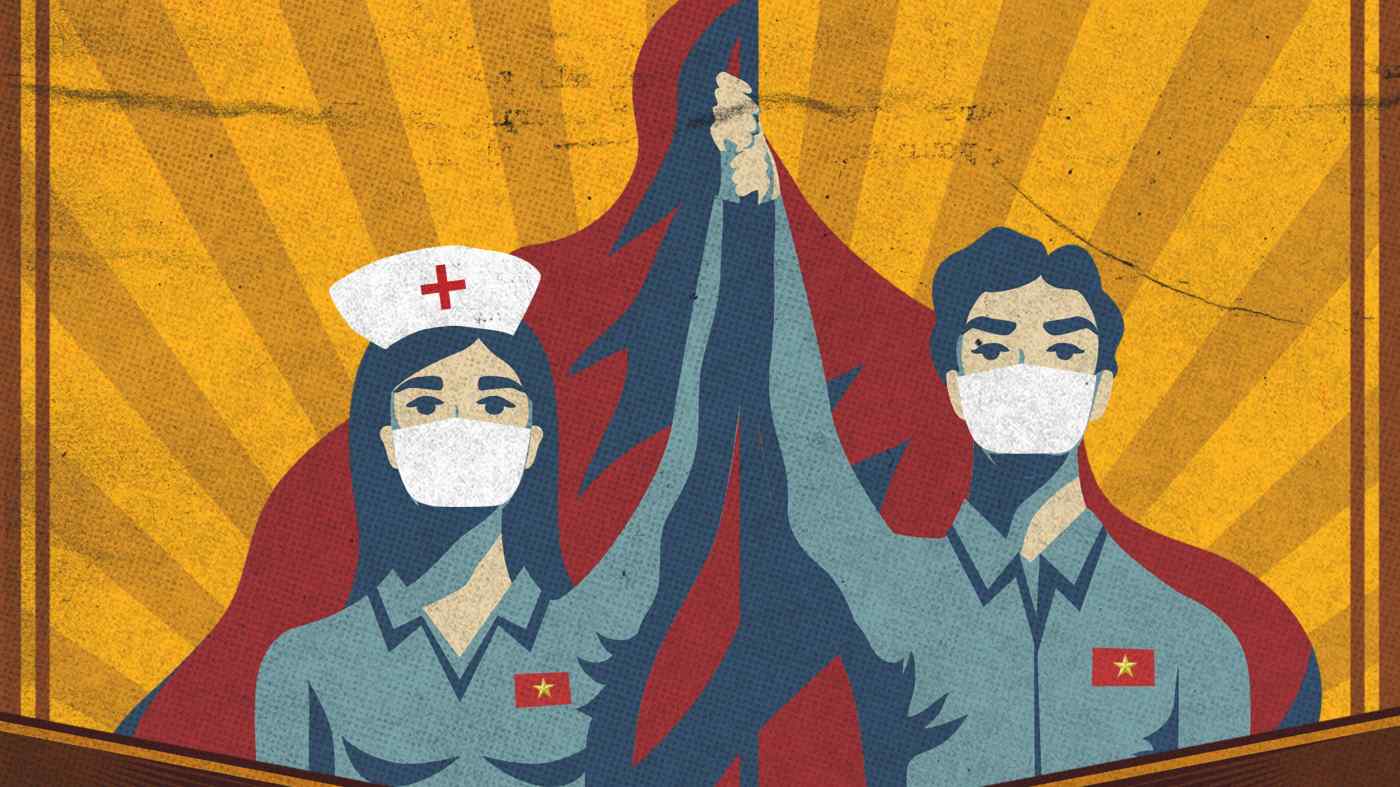 BANGKOK -- Amid the human tragedies of the COVID-19 pandemic, art can feel like a frivolous distraction. But several Southeast Asian artists are honing their creative drive into powerful weapons in the global fightback.

The poster, which shows a pair of medical workers holding up the Vietnamese flag against the backdrop of the sun's golden rays, has been shared some 10,000 times since mid-March in social media and other online spaces -- some outside Vietnam.

Art like this has a familiar ring in Vietnam, where such propaganda was ubiquitous during the country's 20th century wars against France and the U.S. But Hiep injects a contemporary feel by using conversational language in its text to appeal to young Vietnamese.

"I think people like it because it's relatable to them," said Hiep, 34, the creative director for Vietnam's Businesswoman magazine, who is well-known for his posters and artwork for hit Vietnamese films such as "The Tailor" (2017). 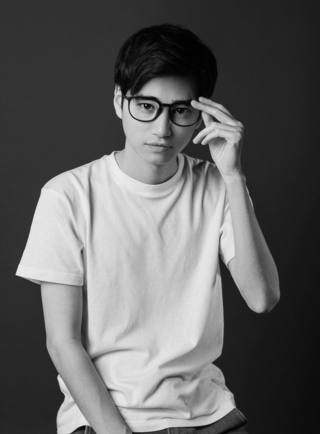 Weiman Kow, a Singaporean artist, refers to her online mix of infographics and comics about hand-washing, masks and misinformation as "infocomics." First uploaded on Jan. 31 on her website comicsforgood.com, the comics have traveled across the globe, with nearly 40 translations by schools, governments, hospitals, offices and advocacy groups.

"I have heard from parents and teachers from China and Indonesia who said that before reading my comics, their kids refused to wash their hands," said Kow, 33, whose comics are free to download. "I would like people to feel empowered with knowledge, and feel happy and safe taking the appropriate actions, like the kids have done," she said. Filipino graphic artist, designer and illustrator Robert Alejandro said he is focusing on the everyday stresses of life in the pandemic, and the need to manage them over time. Since day one of the Philippines' community quarantine in Manila, on March 15, Alejandro has been holding daily online classes that allow children to explore their creativity, release their anxieties, cope with boredom or give their parents a break.

"I want the kids to have a super-fun time," said Alejandro, the 56-year-old president of the family-owned arts and crafts shop Papemelroti. "They're playing -- but actually I'm teaching them so many things," Alejandro said. "I teach because I want to share what I enjoy. What I do seems so simple and quite shallow. But if you do take a closer look, yes, it does serve some purpose."

Alejandro's hourlong drawing classes on Facebook Live typically attract about 1,500 youngsters, many with parents in tow. In one March class, dedicated to drawing get-well cards for COVID-19 patients, Alejandro greeted the youngsters by name as they came online to copy his drawings -- first a rabbit, then a bear, then a whale. At one point, he laughingly explained to a child why the punning phrase "get whale soon" is not a misspelling. Before signing off, "Teacher Robert" told his class: "You can hug me, but for now virtual hugs please." An "infocomic" by Singaporean artist Weiman Kow on the deluge of information amid the COVID-19 pandemic. (Courtesy of Weiman Kow)

For adults, he has held a few "mindfulness drawing workshops" in which he asks participants to choose something they see at home to copy with a pen. Unlike children, adults take a while to appreciate that the class is about the process of observing, rather than the perfect artistic outcome.

While Alejandro's use of his creative skills differs from the direct messaging work of Hiep and Kow, they all said that the value of their initiatives lies not in art for its own sake but in the reuse of their work and the adaptation of their skills.

Hiep said it was uneasiness about social mixing that drove him to open Adobe Photoshop and create his poster. Staying at home since mid-March, he recalls seeing many people going out and interacting as usual despite the government's calls for social distancing. "I wanted people to understand that you can contribute to this fight just by doing nothing," he said. Kow's idea for using comics in health campaigns dates to 2015, when she produced sketches related to the outbreak of Middle East respiratory syndrome. (Courtesy of Weiman Kow)

Kow started to create her COVID-19 comics while on sick leave -- usually drafting the images with pen and paper and finishing in the Procreate drawing application. Her idea for using comics in health campaigns dates to 2015, when she produced sketches related to the outbreak of Middle East respiratory syndrome but did not finalize them.

Hiep and Kow both said that effective public messaging during the crisis requires correct and straightforward information. "The goal is to enable my readers to make the right decisions with knowledge, rather than offer prescriptive actions. After all, most things are a matter of choice, individual location and situation, and personal inclination towards risk (like wearing or not wearing masks)," said Kow, adding that the content of her comics is reviewed by doctors.

"Everyone is the target audience. I've made it simple so kids can understand, but sometimes adults need that too," she said, adding that the use of comics for information campaigns is underrated. "Articles, especially scientific ones, are difficult to read even for educated adults who are strapped for time, so why not distill the important parts into a comic?" 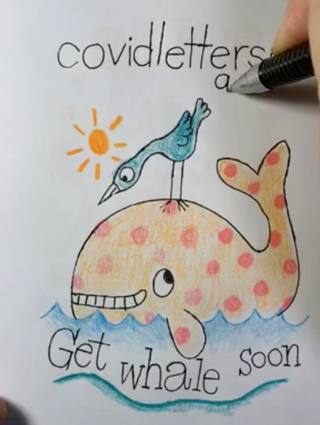 A get-well card drawn by Filipino graphic artist, designer and illustrator Robert Alejandro during one of his live online drawing classes for kids. (Johanna Son)

"That's what art is supposed to do, right? Instead of commanding that 'you must do this, you must do that,' art inspires you to do the right thing," said Hiep. "I don't think commanding or scaring someone will bring as good results as when they understand the issue and really want to help."

For Alejandro, his classes and artwork convey what he calls the choice to be happy -- in even the hardest of times. "Happy" is, in fact, how his artistic style is often described. "We can get so overwhelmed by all the negative vibes, the uncertainty, this dire situation!"

All three artists say they do not know, and do not need to know for sure, where their initiatives are headed.

Kow said she is exhausted by long days producing comics, but aims to do more on the emotional and economic impacts of COVID-19. Her website has also invited children to create their own comics on the theme of COVID-19, drawing about 100 submissions by the end of March. 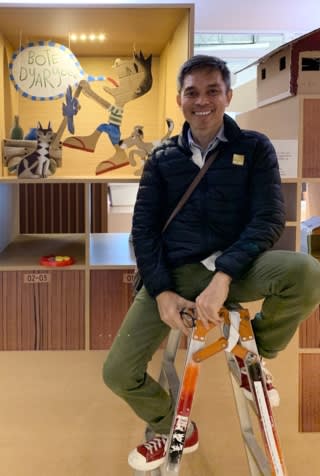 Robert Alejandro: His classes and artwork convey what he calls the choice to be happy. "We can get so overwhelmed by all the negative vibes," he says. (Courtesy of Robert Alejandro)

Many people have asked Hiep for hard-copy prints of his poster, and he is toying with the idea of printing and selling it to raise funds for charity. "I couldn't right now since most of the printing businesses are temporarily closed. But maybe later," he said.

As for his classes, Alejandro said, "I have absolutely no idea what will happen, even tomorrow!" Several private companies have said that they want to become involved in his online arts classes. "But I have no idea what to tell them," he confessed.

All the artists said they are aware that as communities struggle with the prolonged disruption of normal life the war against COVID-19 will need to be sustained by creative workers. "It's going to be a very long fight to keep up people's spirits, to keep the right information going towards people who need it," said Kow.