Travel writer Pico Iyer published two books on Japan in 2019. He describes them as being “part of the same book,” expressing opposite sides of life as a member of a Japanese family while remaining a perpetual tourist. (Courtesy of Derek Sharpton)
JOHN KRICH, Contributing writerJanuary 1, 2021 08:00 JST | Japan
CopyCopied

KYOTO -- Think Pico Iyer and you think of a consciousness without borders.

A British-Indian-Californian, Iyer’s 15 books include “Video Nights in Kathmandu,” chronicling the old hippie trail through Asia, “lonely places” such as North Korea and Paraguay in “Falling Off The Map,” and a transnational “search for home” in “The Global Soul.” Along the way he has also written portraits of Cuba and Canada, and an examination of the exiled Dalai Lama heading down “The Open Road.”

Iyer’s given names, Siddharth Pico, combine references to the Buddha and an Italian Renaissance philosopher, and may have predestined him for such a rigorously worldly fate. For 28 years, though, home for Iyer has been what he calls the “synthetic, California-resembling suburb of Nara,” near Kyoto, which he shares with his wife Hiroko.

No wonder, then, that in 2019 he was able to bring out not one, but two books, with different U.S. publishers, which appear to have cemented his legacy as one of the West’s most dogged and perceptive observers of Japan. As a Financial Times reviewer recently put it: "Rarely in any writing on Japan is provocation so elegantly and surgically performed."

As Iyer told Nikkei Asia, the two works are “part of the same book,” expressing opposite sides of life as a member of a Japanese family while remaining a perpetual tourist. Started partly in anticipation of the Tokyo Olympics (originally scheduled for mid-2020 but now expected to take place in 2021) they are the result of taking “16 years to distill 8,000 pages of notes into books as elliptical and minimalist, as Japanese, as possible.” 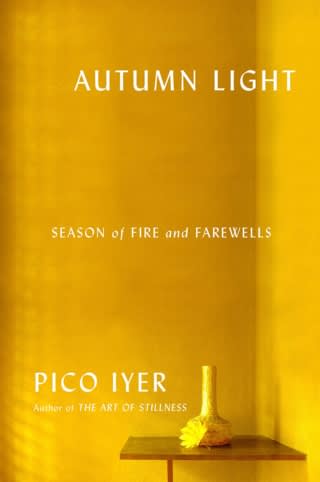 The first, “Autumn Light” is best-suited to fans of slow-paced, highly domestic tales -- a story triggered by the death of Iyer’s Japanese father-in-law in which he says he is “trying hard to reproduce in prose the pace, the themes and the texture of the best movies of Yasujiro Ozu, especially ‘Late Spring’ and ‘Tokyo Story.’”

As every moviegoer knows, says Iyer, “the music, the silences and the stories of these films all draw upon the plaintiveness of things falling away.” A bit of the great novelist Yasunari Kawabata is in evidence as well, as meditations on aging and nature appropriate to a 63-year-old filter through humdrum details of ping pong matches and post office rounds.

The second book, “A Beginner’s Guide to Japan,” is a quick and accessible amalgam of pithy sayings, epiphanies and illuminations that are about as far from a typical traveler’s guide as Iyer himself is from being a beginner.

A typical example reads: “If nothing’s personal in public Japan, you may conclude that Japan is an impersonal place. But as the woman in the tiny patisserie flashes you a beautiful smile and spends many long minutes placing your $1.50 eclair in a pink box, enclosing a bag of ice so the pastry won’t melt on the long way home, wrapping the box in seasonal paper and appending a bow (pick any color) under a badge to keep the box shut, you’re really in the realm of the transpersonal. Everything is deeply personal; it just has nothing to do with you.”

Along the way, he touches on just about every aspect of the country, from weird fads and public personas to women and the family, Zen Buddhism, gardens and baseball, public baths and Starbucks. Where relevant, he ropes in admiring references to celebrities from Oscar Wilde to Meryl Streep. But you will find no tips on sightseeing attractions or what to do with 24 hours in Osaka.

One of the earlier rationales for travel was as a means to find one’s self, rather than to escape, and Iyer admits he has learned “not to trust works that were often put together by travelers who might almost be as ignorant as I was and am.” He adds, “In many ways, the best guidebooks for me are works of fiction.”

What comes through on every page of the “guide” is how the subject still, as Iyer puts it, “gives me a sense of secrets always ready to be uncovered and something inexhaustible even in a landscape I know quite well.” 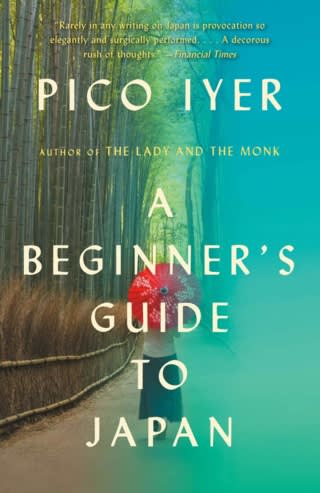 The author recounts how he decided to move to Japan, and escape the hustle of working in Time magazine’s Manhattan office, during “an unwanted 20-hour layover at (Tokyo’s) Narita Airport.”

Of his adopted homeland, he says “Japan to me is an old man in a Planet Hollywood T-shirt, by which I mean someone cool and very up-to-the-moment in all his global stylings, but no less old or Japanese for all of that.”

Unlike many writers and commentators, he does not bemoan the innocent, pre-boom Asia he first traveled through in the mid-1980s, adding, “I don’t feel Asia imitates the U.S., because ... most Asian cultures are old and seasoned enough to take what they want or need from everywhere else without being changed deep down by them.”

To him, the Asian Century is well underway, and it is the West that has been on the receiving end of “yoga and qi gong (an energy remedy) and Zen and less tangible technologies ... Japanese baseball players, Bollywood movies” and a flood of Indian university graduates to Silicon Valley.

He also feels strongly that “even as its geopolitical might has trembled quite a bit,” Japan has remained “a soft-power stronghold, across Asia and beyond.” And he believes “Japan’s great contribution to world culture lies much more deeply in the exportation of its past, and what is relatively indigenous to it, than in its fashions or its futurism.”

He cites the decluttering guru Marie Kondo and the animations of film director Hayao Miyazaki as “transmitting a Shinto vision that is still relatively unknown in New York or London ... a deeply traditional Japanese sense that every speck of dew or blade of grass has a soul.”

In the end, his “guide” may be most helpful in advising on how to survive the COVID-19 crisis. He points, for example, to the model of his Japanese neighbors who “seem to know that life will regularly throw surprises at us, through the 20 or more typhoons that sweep through the country every year, through the regular tremors that shake the ground beneath our feet, through every kind of unwanted surprise.” For them, he says, “the creed of impermanence” is “less a source of grief than a cause to find inspiration, wonder, beauty, right now.”

Iyer, a travel writer who has journeyed even to Antarctica, confesses that “his real adventures take place at the desk.” Yet he has also declared, in an article published at the start of the pandemic, that, “Nothing convinces me that our families, our economies -- our imaginations -- can function in the absence of travel,” even when “your corner store could be as deadly as a shopping-mall in Hubei” (the Chinese province where the pandemic began).

Still, he admits the period of enforced solitude has helped him “break the back of three books,” on subjects as varied as the Australian desert and going to the movies with his mother -- even as he is contracted for two more volumes about his ongoing spiritual search.

“An argument with reality can never be won,” may be this professional wanderer’s credo, as expressed in “Autumn Light.” Still, the reality of Japan has spurred Iyer on to these summary works, true to his faith that, “Places, like people, are defined (and made interesting) by their contradictions.”