As Frederik L. Schodt explains in his book "My Heart Sutra," the Heart Sutra -- a core Buddhist teaching -- is everywhere in modern Japan, from towels to T-shirts to TV shows. Right: A statue of Kannon, the bodhisattva of compassion and the narrator of the Heart Sutra. (Courtesy of Frederik L. Schodt)
PETER TASKER, Contributing writerNovember 13, 2020 08:00 JST | Japan
CopyCopied

In December 1980, just days before his murder, John Lennon took part in a photo shoot in New York City. In one image, captured by photographer Bob Gruen, Lennon wears a jacket with a sleeve embroidered with the kanji (Chinese characters) that form the opening of the Heart Sutra, a core Buddhist teaching.

Dabbling with Eastern religions was nothing unusual in the Western counterculture, and The Beatles had played a pioneering role with their highly publicized trip to India. But to Yoko Ono, walking alongside Lennon in the photo, and to the designer of that jacket, Kansai Yamamoto, the Heart Sutra would have been no more exotic than the King James Bible is in America.

As Frederik L. Schodt explains in this unique book, the Heart Sutra is everywhere in modern Japan -- on towels, band-aids, T-shirts, teacups, smartphone apps, being chanted at local temples and as an establishing device on TV shows and films. A version by an electric guitar-wielding Zen abbot has been viewed nearly 2 million times on YouTube. The sutra is a familiar sight, and sound, in the contemporary Sinosphere too.

Expressed in just 260 characters, the sutra was translated from Sanskrit to Chinese by the monk Xuanzang in 649 and appeared in Japan some 80 years later. The text in use today is, to all intents and purposes, unaltered since then. Simple but cryptic, it offers a series of seeming paradoxes, such as "form itself is emptiness, emptiness itself is form." The ending is a mantra rendered into English by D.T. Suzuki, the great Zen proselytizer, as "O Bodhi, gone, gone, gone to the other shore, landed at the other shore, Svaha!"

Schodt is not a religious scholar, though he is well-informed about recent academic controversies concerning the sutra. He is not even a Buddhist, though sympathetic to the religion. Instead, he describes himself as "a typically modern, lazy, only occasionally spiritual being." A replica of the "Heart Sutra" jacket John Lennon was photographed wearing days before his murder in 1980. (From Amazon)

His book is part history, part anecdote-rich memoir. He wrote it as "a way to sort my own thoughts and experiences and satisfy my own curiosity." This sense of personal quest is what makes it such an engaging read to anyone with the slightest interest in the subject. The author must have done a tremendous amount of research and in-person investigation, but the writing is modest, honest and clear as a wind chime.

His first encounter with the sutra came through the countercultural route. In the early 1970s, he attended a poetry reading in a Los Angeles bookshop at which the beat poet Allen Ginsberg chanted the mantra portion. Schodt had already spent five years living in Japan and knew the language well. Despite that, he had not been aware of the Heart Sutra's existence. It was in subsequent years that his interest grew and he began to explore its place in the culture of Japan and the Sinosphere. Now he can recite the whole thing and copy the characters with pen and brush.

Schodt is best known for his illuminating writing on manga. He was personally acquainted with Osamu Tezuka, Japan's "god of manga" and has translated several of his classic works. At first sight, there may seem a long distance from "Astro Boy," Tezuka's best-known manga series, to the historical Buddha who preached in India 2,500 years ago. Not so. Tezuka produced an eight-volume manga biography of Buddha and spent decades on "Phoenix," a multinarrative opus (translated by Schodt) that explores reincarnation, karma and the connectedness of all phenomena. 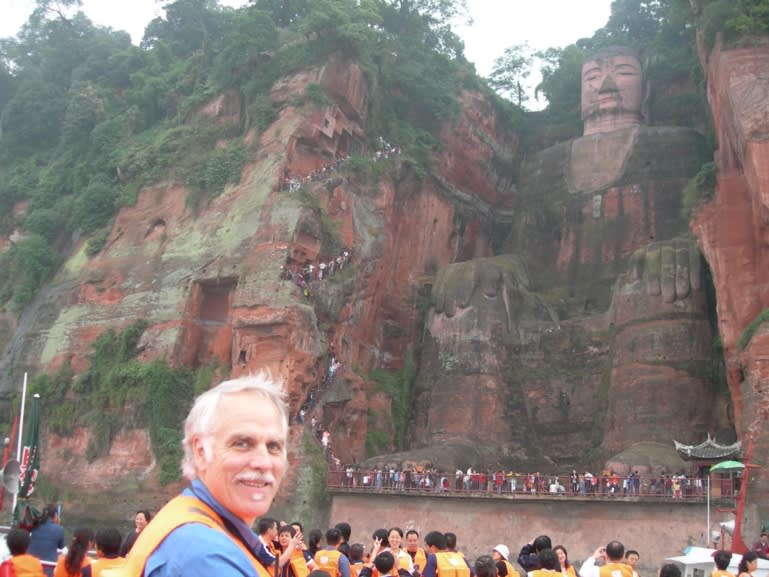 Indeed, reading Schodt's book makes me think that Buddhism, which teaches that all things (not just sentient beings) have Buddhahood, may be the ideal belief system for our artificial intelligence-driven, post-human future. Schodt quotes from an interview with Masahiro Mori, a robotics engineer and longtime student of Zen, who wrote "The Buddha in the Robot." According to Mori, "to learn the Buddhist way is to perceive oneself as a robot ... and to learn the robot is to learn Buddhism."

How might that work in practice? Schodt visited the 400-year old Kodaiji Zen temple in Kyoto to view the "Kannon Android Mindar" in action. Kannon is the feminized Japanese version of Avalokitesvara, the bodhisattva of compassion who is the narrator of the Heart Sutra. The android -- which has humanlike hands and face, but arms and chest with wires and motors exposed -- explains the Heart Sutra and answers questions from a virtual audience.

On one level, this is a gimmick; on another, a logical extension of Buddhist practice. As Schodt notes, new Buddhist statues go through a consecration ceremony known as kaigenshiki (eye-opening ceremony) which imparts Buddha-nature to them. The Mindar android went through such a ceremony. A skeptical observer from a rival sect was forced to concede that, since people in the audience were praying to it, Buddha-nature had clearly entered the android and the consecration had worked. A "robot priest" chants a sutra at a trade show for the funeral and cemetery industry in Tokyo in 2017.   © Reuters

Back to John Lennon, "gone, gone to the other shore" 40 years ago. In a fascinating aside typical of his book, Schodt muses on similarities between the Heart Sutra and the song "Imagine," which is now jointly credited to Lennon-Ono, in line with Lennon's recorded comments about Yoko's contribution to the lyrics.

Both contain a series of negations. "Imagine" pictures an existence stripped of certain mental constructs -- no countries, no religion, no possessions, etc. The Heart Sutra has a far more radical program -- "no eyes, no ears, no nose, no tongue, no body, no mind" -- that erases the building blocks of reality itself.

Yet from this superficially nihilistic vision, the sutra mysteriously generates a sense of cleansing, stability and focus -- and has been doing so for 1,500 years. Whatever your religious convictions, in this era of political fracture, global pandemic, climate angst and general confusion, that is surely something to be treasured.