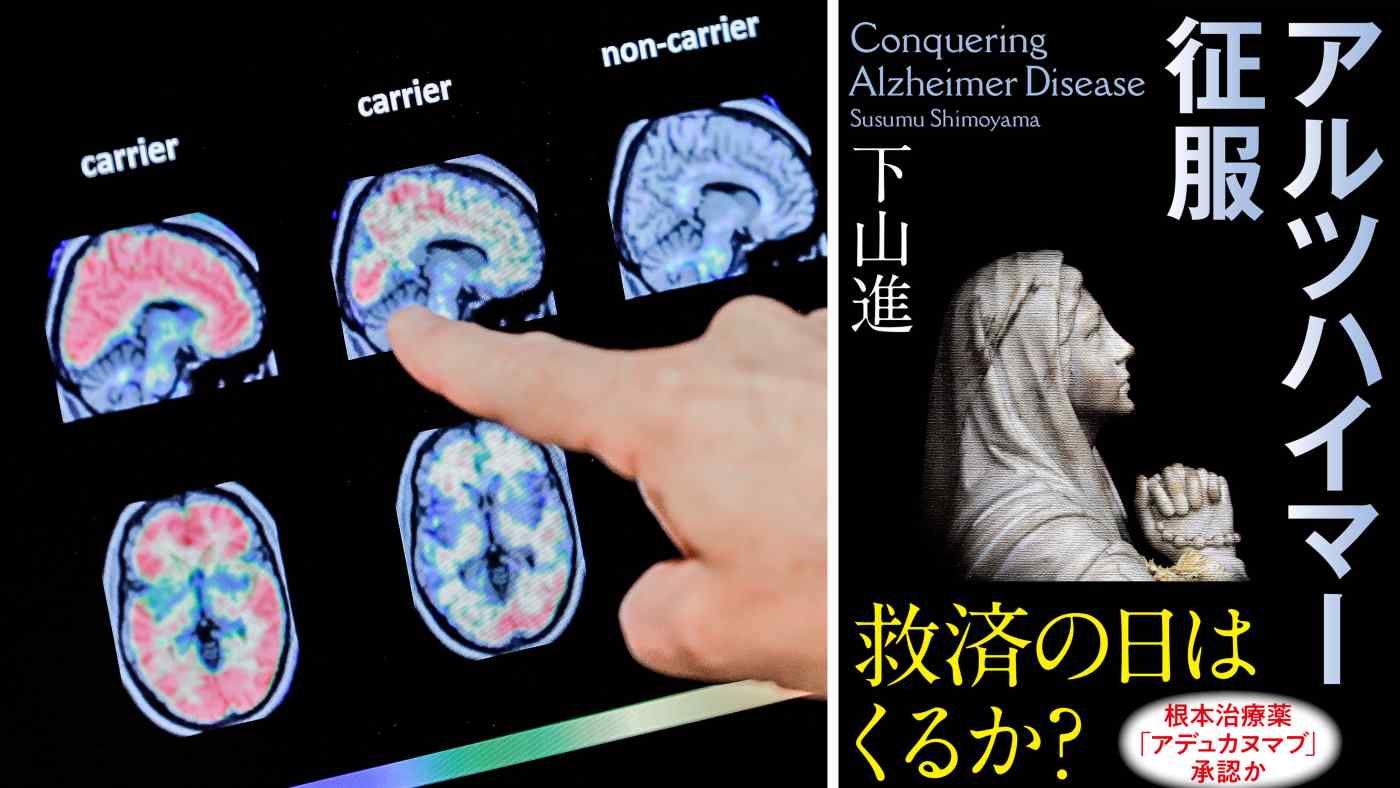 The stock price of U.S. drugmaker Biogen surged in late January as the U.S. Food and Drug Administration announced it would take another three months to decide if it would approve the company's new antibody-drug, aducanumab.

Possibly the first drug to effectively stay the progression of Alzheimer's disease, the market saw the FDA delay as a positive sign that world's peak drug regulatory agency was leaning toward approval.

The development of this potentially life-changing treatment is chronicled in Susumu Shimoyama's "Conquering Alzheimer's Disease." The book details decades of struggles by patients, physicians, scientists and pharmaceutical companies that culminated in the development, by Biogen, Swiss biopharmaceutical company Neurimmune, and Japan's Eisai, of this new drug that finally offers a glimmer of hope for a cure.

Alzheimer's is a particularly cruel disease, slowly eating away at a person's memories and mental capabilities, leaving a shell of a body behind. It is torture for family members and loved ones to have to witness.

I know because I saw my mother through her deterioration from the time she started showing symptoms in the late 2000s. Over the last 10 years, she became reluctant to cook, which was once a passion of hers; she refused to take baths, angrily arguing that "old people don't need it"; she even forgot if she had eaten. During this time, my family and I were constantly overwhelmed with absolute despair and helplessness as we knew there was nothing we could do to get her back or even slow her deterioration.

Today, she no longer knows us and cannot even utter the simplest words. She cannot be encouraged to walk even though she is physically able to. The mother I knew and loved has long gone.

During a neverending, painful journey, the only medical treatment available to her was a drug called Aricept, developed by Eisai. This drug only worked in the early stages of the disease when it is proven to arrest some cognitive impairment. Apart from that, we had no weapon against Alzheimer's. This was not for want of effort -- scientists have faced defeat after defeat.

Shimoyama's new book offers fresh hope, although for me, I railed at the gods that the drug was not developed a decade ago, before my mother started showing symptoms. Chart showing the two-decade-long pre-symptoms development of Alzheimer's disease. The World Health Organization estimates that 5% to 8% of people aged 60 and older develop dementia, and 60% to 70% of these cases turn out to be Alzheimer's. (Chart from a paper by Randall J. Bateman et al. in the Aug. 30, 2012 issue of the New England Journal of Medicine.)

Given that many developed countries are dealing with aging populations, this book is a hugely important read, not just for patients and their families. The World Health Organization estimates that 5% to 8% of people aged 60 and older develop dementia, and 60% to 70% of these cases turn out to be Alzheimer's.

The disease dwells not only in the genes, it also renders those with type-2 diabetes, high blood pressure and smoking habits more vulnerable to its onset. Considering the wide swath of society that could potentially be afflicted, Conquering Alzheimer's Disease yields some enlightening clues.

Not only does the book provide practical information, but it offers masterful writing on a topic of global relevance, bringing to mind Siddhartha Mukherjee's Pulitzer Prize-winning "The Emperor of All Maladies: A Biography of Cancer."

Both books spare readers complicated medical terms, instead drawing them in with personal stories and dramas, narrating the history of human struggles in medicine. Shimoyama's ability to spin a good yarn also reminded me of Michael Lewis' writing, author of -- among other things -- "The Big Short" and "Moneyball."

Shimoyama's past experience as a journalist and editor at a major magazine, and book publisher Bungeishunju, may have helped with the research for this book. A well-regarded nonfiction writer in Japan, Shimoyama reached out to a vast number of patients, doctors, scholars, scientists, and pharmaceutical executives in the U.S., Japan and Europe over nearly two decades for their stories. At a press conference on Jan. 27 at the Japan Press Club, the author described this whole saga as a "long relay across countries, generations and professions."

The book starts with a story about the discovery of a rare type of Alzheimer's, called dominantly inherited Alzheimer's disease, in the 1970s in a woman in her early 40s in the north of Japan. Her doctor found many Alzheimer's cases in her family tree, with studies of such families around the world, later helping doctors and scientists to recognize development of pre-symptom Alzheimer's that can show up over a period of 20 years before the onset of the disease, as well as revelations about specific genes whose mutations have strong associations with Alzheimer's.

Holding such stories together is a common thread when it comes to most Alzheimer's related research, especially overcoming pharmaceutical challenges related to the disease that have culminated in the development of several drugs that offer hope, including aducanumab.

Key to these scientific developments is the discovery and isolation of one of two primary Alzheimer's markers -- the paired helical filaments that are best described as tangled fibers in brain cells. This process was completed in a Harvard lab by American scientist Dennis Selkoe, and his visiting Japanese colleague Yasuo Ihara. This is also a story of global collaboration. 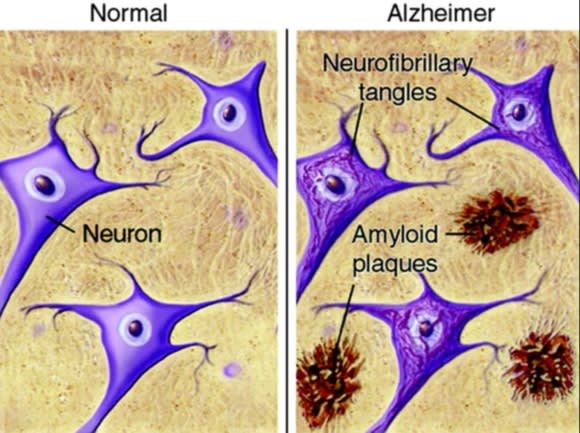 Back in Japan, Ihara discovered that the paired helical filaments were made of an abnormally folded variant of a protein called tau. Meanwhile, Selkoe, still at Harvard, identified a particular protein that formed the other primary visible marker -- dark plaque that forms around brain cells. This plaque is a sticky protein called amyloid-beta. The accumulation of this around brain cells is widely believed to lead to Alzheimer's.

Selkoe recruited biologist and pharmacologist Dale Schenk in 1987 for his newly founded biopharmaceutical startup. Schenk, widely considred a genius, would later discover that amyloid-beta buildups can be reduced by antibodies generated by natural immune systems of mammals.

This discovery was seminal as it yielded a big clue for future treatments, leading to a range of drugs developed to boost that immunity by companies such as Biogen, Eisai, Eli Lilly, and Roche, as well as immune therapeutic specialists like Neurimmune and AC Immune of Switzerland.

The most keenly watched drug today is aducanumab. The FDA will make a decision on the use of the drug by June.

In the epilogue to Conquering Alzheimer's Disease the author revisits Hiroichi Tazaki, the doctor who treated the first patient to have been found to carry the inherited Alzheimer's gene in the 1970s. After those bleak decades of facing a killer disease with no cure, Tazaki's message was simply: "Today there is hope," And that is this book's main message as well.

Even if the FDA does not approve the use of aducanumab, there is now a clearer way to proceed. Big Pharma, as well as startup pharmaceutical companies, are now developing drugs targeting amyloid-beta and tau proteins. Shimoyama's book is not just a pharmaceutical tale, it is a story of world experts coming together to find a way through misery, a tale for our times.