BANGKOK -- Narisa Chakrabongse, granddaughter of a Thai prince and great-granddaughter of King Rama V, known as King Chulalongkorn, has spent much of her life being exactly the opposite of what one might expect. Part-British and Russian in her lineage, she is devoted to challenging unfortunate stereotypes about Thailand -- especially when it comes to books and critical thought.

"People love to say that Thais aren't interested in reading, and trot out surveys that conclude Thais only average 13 lines of a book in a year, but that's obviously not true," she argues emphatically on the veranda of her period residence in the grounds of the boutique Bangkok riverfront hotel, Chakrabongse Villas.

This elegant heritage home doubles as the headquarters for the Bangkok Edge Festival, an annual gathering focused on literature, music and food that Narisa founded two years ago. The festival, taking place on Jan. 20-21, was cancelled in 2017 amid national mourning for the late King Bhumibol Adulyadej.

The inaugural 2016 festival was a leap of faith in local literary culture. "To call Bangkok Edge audacious is an understatement," said David Robinson, director of Bangkok River Partners, a group that is initiating plans to revitalize the Chao Phraya River.

"In fact, I recall Narisa asking, 'Are we mad to stage a talk-fest in Thailand?' She was hoping to attract 4,000 people, but days later, with standing room only in the auditoriums and the streets packed with Thai and foreigners of all ages and backgrounds, turnstiles counted more than 25,000." 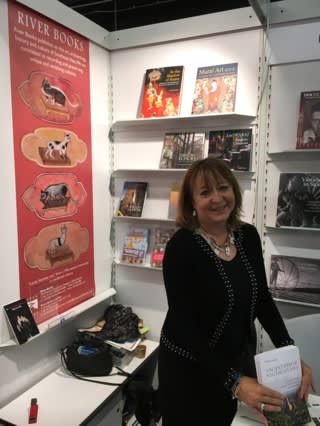 "Maybe we're not as vibrant here as London or New York, but that doesn't mean there aren't lots of intellectuals, or universities, or book buyers," said Narisa. "I think these misconceptions stem from the orientalizing fantasies of foreigners, who come here for the wrong reasons and meet the wrong people because Thais aren't the best English learners, and expats themselves fail to learn Thai."

A mother of two grown sons, Narisa seems comfortable in dual cultures and languages -- and splits her time between her two "home" countries. Born in England and raised in Cornwall, she studied at boarding schools (where Thais of royal lineage were among her classmates), and then at London's prestigious Courtauld Institute of Art. She traces her discovery of reading to long childhood boat trips from Thailand to England.

After moving back to the land of her ancestral roots in her late 20s she did research for the Ford Foundation and translations for the Thai military, and then helped to start the Green World Foundation, a nonprofit organization promoting environmental ethics and sustainability, in response to Thailand's environmental degradation.

"I do get tired at times of Thais getting constantly surprised to hear me speak the language, or insisting that I can't really be Thai," she said. "I suppose I'm used to being questioned and criticized. But that just makes me more committed."

When it comes to explaining the Orient in real-life terms, there is no better place to start than the extensive catalogue of her publishing house, River Books. Begun as a favor to publish a friend's work nearly 30 years ago, the company has expanded to become Thailand's most important English-language publishing house (it also publishes Thai language material).

River Books is a storehouse of the past in Thailand and Southeast Asia, producing volumes that focus on ethnography, archaeology, art and architecture, historical events and folk customs. Some do "surprisingly well -- which to me is selling 1,000 copies," Narisa said.

Many deal with obscure or hitherto unknown aspects of Thailand's relations with the world, such as "Siam and the Vatican In The 17th Century,"

by the historian Michael Smithies, or the recently-published "Siam and World War I," by Stefan Hell. Her list is especially rich in early photography that vividly preserves the look and feel of old Thailand. Both "Unseen Siam" by Joachim K. Bautze and the documentary work of the Scottish photographer and travel writer John Thomson are evocative reminders of the simpler life and eternal beliefs buried beneath today's avalanche of development.

Yet Narisa's press does not neglect the contemporary scene. This is best reflected in a novel by Rosalind Russell about Myanmar's political spring, and in "Very Thai" -- a witty compendium of characteristic local eccentricities that is River Books' top commercial mainstay. Narisa's list also provides the first and last word for befuddled travelers on such cultural manifestations as spiritual tattooing and the idiosyncratic displays inside Thai taxis.

The publisher herself has co-authored a cookbook of recipes derived from her hotel's acclaimed restaurant and, more significantly, a biography based on private materials about the love between her grandfather Prince Chakrabongse and her grandmother Ekaterina Desnitskaya, a Russian nurse, which directly challenged Thai royal taboos. At the time, no son of a Thai king had ever married a foreigner. The marriage ultimately broke down under social pressures.

However, Narisa stresses that Bangkok Edge is not just another Asian literary showcase, but first and foremost a "festival of ideas." Among subjects explored will be identity politics, populism, crowdfunding, the LBGT community and sustainability. Given her passion for environmental action, she seems especially proud of workshops fostering urban gardens, reducing food waste and future transportation solutions.

There will also be a discussion of hip hop music, a slam poetry event, appearances by local rock bands chosen by Narisa's son, Hugo, a prominent musician in Thailand, food and cooking demonstrations, puppet shows, and stories and craft demonstrations for children. Narisa, who did not hesitate to speak out for a pro-Tibet boycott of the Beijing Olympics, and other causes, does not seem worried that some of her invited speakers might generate controversy.

"On that front, let's just say that when a civil society has stalled or been reduced, that's not conducive to creativity. It's a very childish country that can't take any criticism," Narisa said. "Yet there are many worse places in the world to be -- look at Brexit or [U.S. President Donald] Trump. There's a huge polarization going on in the world. Still I'd rather not focus on negative things in life, but stress improving our natural environment or the joys of reading."

That is what this year's Bangkok Edge aims to do, while trying to get Thai people to become, in Narisa's words, "a little less parochial." Until then, she plans to carry on in royal fashion. "Narisa is charmingly tenacious and delightfully direct," said Robinson. "A very good person to have on your side."