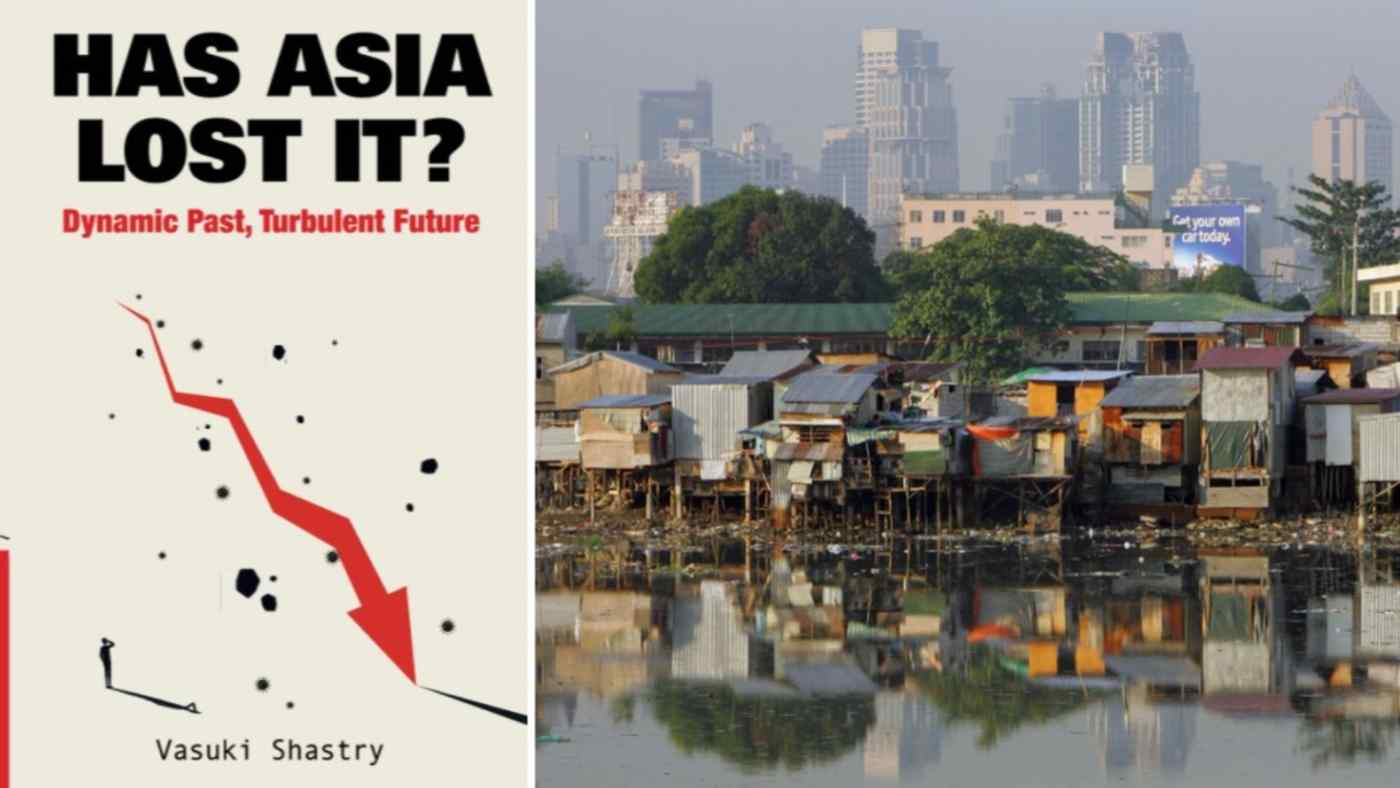 In his new book, "Has Asia Lost It? Dynamic Past, Turbulent Future," author Vasuki Shastry is essentially saying that after you read all about Asia's achievements and potential, it is time to learn about how the bottom tiers of society have made insufficient gains. (Nikkei montage; source photos by World Scientific and Getty Images)
RICHARD BORSUK, Contributing writerAugust 13, 2021 08:00 JST | Southeast Asia
CopyCopied

In the years before COVID-19 started battering the world, consultancies and multilateral lenders among others published a plethora of upbeat books and reports on the theme of "Asia Rising." There was not much writing that countered the tide of strong optimism about what was billed as the "Asian Century."

Among the bullish forecasts for emerging Asia was one from accounting firm PwC in 2017 predicting which economies would be the world's biggest in 2050. China was given the top spot -- no surprise there -- followed by India, the U.S. and Indonesia.

In the midst of COVID-19's social and economic devastation, this may not be the time to tout Asia's bright future (except perhaps for tech businesses). But when Asia recovers from the pandemic, we can expect a new round of publications praising the region and its potential.

For former journalist and public affairs executive Vasuki Shastry, a longtime observer of the region, there is a need to deflate the "hype and bubble" created by what he labels "Asia braggarts and boosters." He plays contrarian in a new book, "Has Asia Lost It? Dynamic Past, Turbulent Future."

He successfully provides what outspoken retired Singapore diplomat Bilahari Kausikan calls a "corrective" to facile predictions about a rising Asian century. The book surveys a raft of social problems and economic and other inequalities of many emerging Asian nations that often are not seen by global executives who jet in and stay in gleaming five-star hotels. In essence, Shastry is saying that after you read all about Asia's achievements and potential, it is time to learn about how the bottom tiers of society have made insufficient gains. The author has the bona fides for tackling the subject, and the result is worth reading. A man pushes a cart loaded with sacks of garbage in Manila on June 11.   © Reuters

During a career that included senior roles at the International Monetary Fund and Standard Chartered Bank, Shastry attended plenty of Davos summits and confesses to organizing conferences that promoted the "Asia shining" theme. But he now feels he has seen the light, or rather, a collection of dark clouds hanging over Asia following its decades of solid growth.

Shastry, who is more worried about developing rather than developed Asia, says he started drafting his book with a more positive thesis, reflecting status quo views. It was not the devastation of COVID-19 that changed his mind, although that obviously helped expose the fault lines in Asia and elsewhere. Instead, it was a 2019 ride in a Mumbai three-wheeled auto rickshaw. When Shastry asked his young driver about his life, the response was that he lived in hell -- in a shared shack without running water in a slum that sometimes flooded -- while asserting that his well-off passenger lived in heaven. The conversation was to "radically challenge my conventional thinking," Shastry admits.

So has Asia "lost it"? Shastry does not provide a straight yes or no answer. The book's cover, depicting a chart-line careening downward, seems to indicate that Asia is on a long-term declining trend. The contents belie that impression to an extent. Shastry argues that he is still an optimist although he acknowledges that some readers might find his narrative "overwhelmingly negative." He believes that Asia will continue to be a growth engine for the global economy, although the road ahead will get bumpier.

"The only problem is that the growth engine is carrying a train which is filled with self-satisfied elites," while hundreds of millions of have-nots are "stranded on the platform unable to get in," he writes. "The cost of entry to live the Asian dream is getting ever steeper." Boys gather in a Mumbai slum: A conversation Shastry had with a young driver of a three-wheeled auto rickshaw who lived in a slum in the Indian city was to "radically challenge my conventional thinking," he writes. (Getty Images)

The pandemic is making life harder for Asia's poor, and expanding their ranks. This can now be seen in Indonesia, where the Delta deviant of COVID-19 is spreading, tragically exposing the country's institutional weaknesses. The surge of cases, long predicted by epidemiologists, caused the same deadly shortages of hospital beds and oxygen tanks that had been seen earlier in India. Illustrating Indonesia's yawning inequalities, some of the rich have flown to the U.S. to get vaccines not yet available at home. Meanwhile, hundreds of medical professionals have died while millions of people who had been lifted out of poverty in recent years have been pushed back in.

In describing the social inequities of modern Asia, Shastry refers to the 13th-century Florentine poet and philosopher Dante who wrote in the "Divine Comedy" about the nine circles of hell, whose entrance sign famously declared: "Abandon all hope, ye who enter here."

Shastry writes that Asia has its own circles of hell, including the travails of migrant workers (whom he strangely calls "urban cowboys and cowgirls"), female inequality, armed insurgencies, and environmental degradation. In a chapter titled "The Death of Bali," he focuses not on the plunge in tourism that has rendered so many people jobless, but instead on the island's water management woes from years of mass conversion of rice fields into tourism facilities. Bali, he writes, "needs more engineers, fewer masseurs." Although Shastry offers fair assessments in many cases, he also makes some overly sweeping generalizations. He says, for example, that the massive shift of young people into big cities to look for better economic prospects has produced "horrifying" results, whereas in some countries the rural-urban shift has benefited both sides of the divide. He also asserts that "intimidating journalists and/or buying their support is the secret sauce of ABCs (Asian billionaires club)," referring to the region's politically powerful oligarchs, but that is not always the case.

Many readers might disagree with his views on the region's political leadership. In a chapter titled "Asia's Old Men," Shastry argues that most of the current leaders were born during the "radio and telegraph era of the 1940s and 1950s," and that they have been unable to understand the aspirations of their younger populations. He calls the age of 60 "a critical benchmark in figuring out how attuned they are to the concerns of younger people."

That claim can be disputed since there are examples of elderly leaders who introduced reforms to improve the lives of the young. Deng Xiaoping was in his late 80s when he undertook his famous "southern tour" that led to China's big opening to the outside world and ultimately changed many lives for the better. India's Manmohan Singh is another example of a leader who at an advanced age helped his country progress through pivotal reforms.

Shastry contends that Indonesian President Joko Widodo inspired young people to engage in politics, but Widodo, who recently turned 60, has disappointed many by seriously weakening Indonesia's anti-corruption agency, among other missteps. Shastry does note that the Indonesian leader has lost some shine in his second term by "behaving like his peers from the radio and telegraph era," as members of his family enter politics. 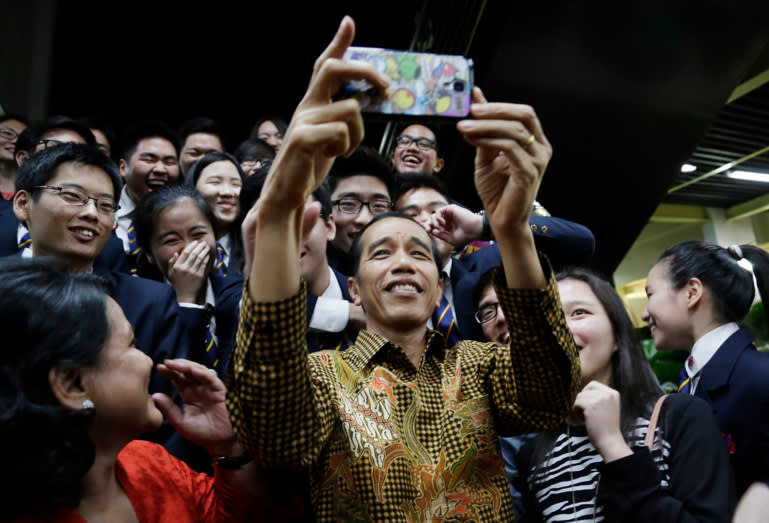 Shastry argues that while Indonesian President Joko Widodo inspired young people to engage in politics, he has lost some shine in his second term by "behaving like his peers from the radio and telegraph era," as members of his family enter politics.

One of the book's strengths is the author's use of crisp quotes from a variety of sources to reinforce his case. He cites assassinated U.S. senator Robert Kennedy and economist Joseph Stiglitz on why the world needs to stop obsessing over gross domestic product growth numbers. Shastry argues that more attention should be paid to the United Nations Human Development Index and to government spending on health and education. As New Zealand Prime Minister Jacinda Ardern put it in 2019 in discussing the GDP fixation: "Economic growth accompanied by worsening social outcomes is not success. It is failure."

It was easy for Shastry to forecast a turbulent future, as Asia's present is already so bumpy. Since he finished the book, the Delta variant of COVID-19 has spread widely, taking a big toll on lives and livelihoods. U.S.-China tensions remain high, in spite of Donald Trump's defeat. Under Myanmar's brutal military regime since the Feb. 1 coup, nearly 1,000 civilians have been killed and more than 7,000 arrested, opening the way for COVID-19 to run amok.

Asia hopefully will be able to eventually build back better, and meet the basic health and other needs of all citizens. Shastry's book is a useful, easy-to-read summary of things that were not built, or built well enough, during the decades when Asia was rising.

"Has Asia Lost It? Dynamic Past, Turbulent Future," by Vasuki Shastry (World Scientific, 2021).

Richard Borsuk was Jakarta correspondent for The Wall Street Journal (1987-98) and is co-author of "Liem Sioe Liong's Salim Group: The Business Pillar of Suharto's Indonesia."