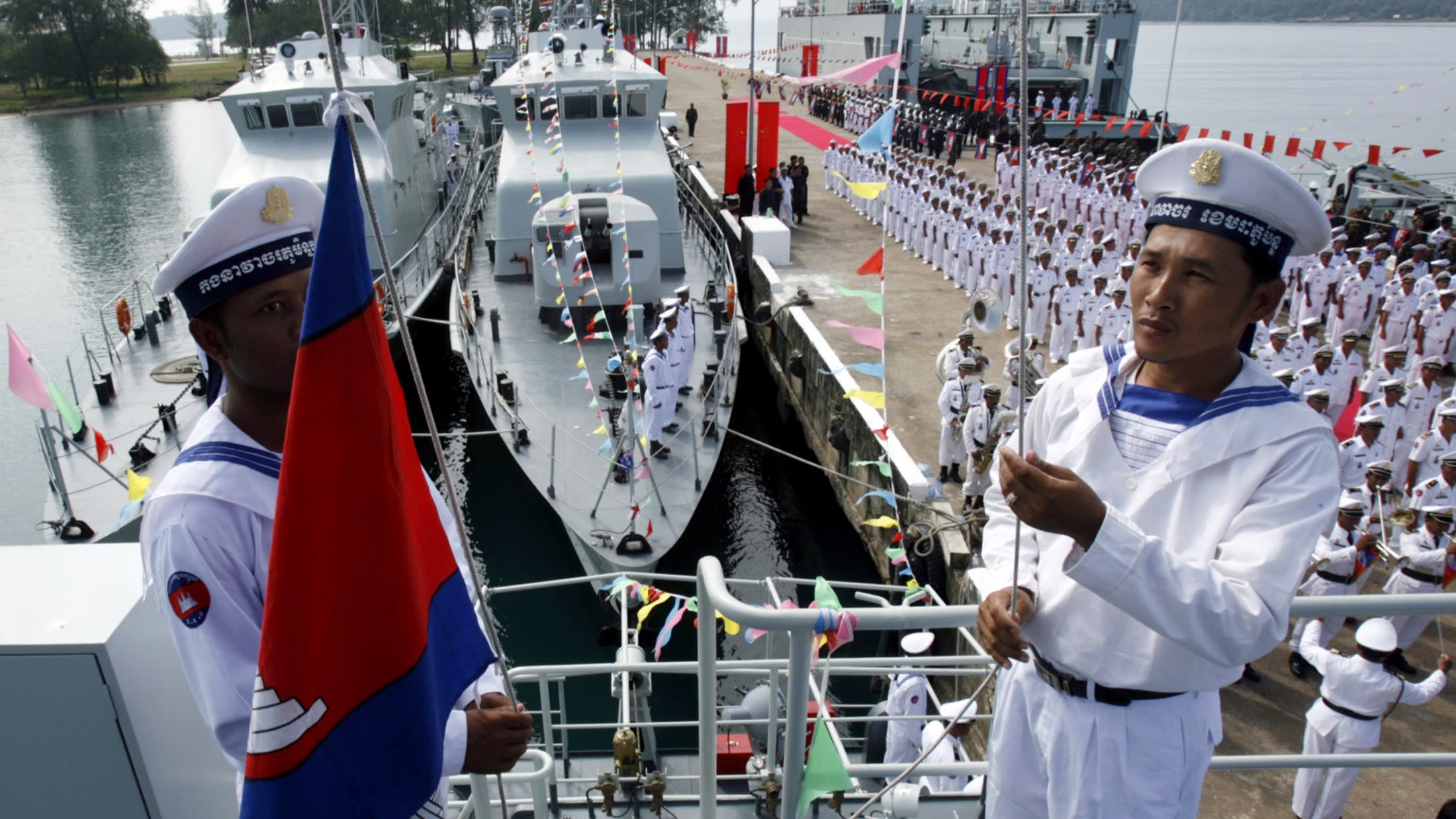 Cambodian sailors raise their national flag on a Chinese naval patrol boat during a handover ceremony at a Cambodian naval base at Ream, southwest of Phnom Penh, in 2007.    © Reuters
MICHAEL VATIKIOTIS, Contributing writerAugust 25, 2020 00:00 JST | China
CopyCopied

About two decades ago, the first articles written about China's investments in Southeast Asia were met with skepticism. Predictions of China's rise were dismissed as inflated and premature. After all, even if China's economy was starting to show promising signs of growth and expansion, the country's diplomatic and military clout was weak. Many people anticipated China's collapse before its eventual rise.

Today, measuring the extent of China's reach and influence in Southeast Asia has become a critical metric for the strategic rivalry between the United States and China that now dominates discussions of Asian security. U.S.-based Canadian researcher and veteran journalist Murray Hiebert's exhaustive study of China's influence in Southeast Asia comes at a particularly critical juncture, for never in recent history have these two great powers been so perilously close to conflict. Once again, Southeast Asia looks to be a proxy battlefield.

Hiebert asks an important question at the outset of "Under Beijing's Shadow: Southeast Asia's China Challenge" -- what is driving China's expansion into Southeast Asia? Is it about commercial opportunities or the need for a defensive buffer to protect its own sovereignty? As the author reveals in meticulously researched detail for each of region's 10 states, the picture is mixed.

There are strategic drives to build highways and railways linking China's Yunnan Province with Myanmar and Laos, and by extension Thailand. There are also commercial ventures to develop property, casinos and tourist resorts for the growing legions of Chinese tourists and overseas workers. In this respect, the author quotes a former U.S. official saying: "Although it is true that China is engaged in mercenary and opportunistic economic activities, in some respects it replicates how other great powers have routinely behaved in the developing world." Normal as these impulses might be for a great power, they nonetheless generate apprehension on the ground in Southeast Asia, and much of the reporting in the book highlights these fears. Aggressive fishing, exploration for underwater minerals and expanding definitions of territorial waters in the South China Sea top the list of concerns for the maritime states of Southeast Asia, while China's dam-building activity in the upper reaches of the Mekong River and a drive to make the waterway navigable for larger vessels is of great concern to Thailand, Laos and Cambodia.

The author goes into great historical and statistical detail to document the moves China has made in recent years to assert its sovereignty, using a mixture of commercial carrots and hard power sticks Noteworthy are details about some of the less obvious tools that China has used to magnify its influence in the region, such as the supply of military equipment and officer training that has increased over the years in Cambodia, Myanmar and Thailand, and efforts to influence government by training officials and members of political parties in the Philippines. China has provided political training in its Communist Party training schools for 10 officials each year from Indonesia -- five from the Indonesian Democratic Party of Struggle, Indonesian President Joko Widodo's party, and five from the Democratic Party, which is affiliated with former President Susilo Bambang Yudhoyono.

Of particular note is the attention paid in this book to the often-overlooked issues of soft power -- the impact of Chinese-backed education, media and tourism. In Singapore, the region's only state with an ethnic-Chinese majority, the airing of China-influenced TV channels is of concern to some "because they push the idea of a Greater China, that ethnic Chinese ought to have an affinity to the People's Republic of China," Hiebert quotes a local scholar as saying. He also tackles the sensitive issue of how China is starting to tug on the loyalty of Southeast Asia's 30 million or so citizens of ethnic Chinese descent, and the manner in which these numbers are increasing. The book includes useful data on the numbers of workers from China in Southeast Asian countries -- some 200,000 in Manila alone. Perhaps more could be said here about what these trends mean in terms of preserving the region's independence from its giant northern neighbor. 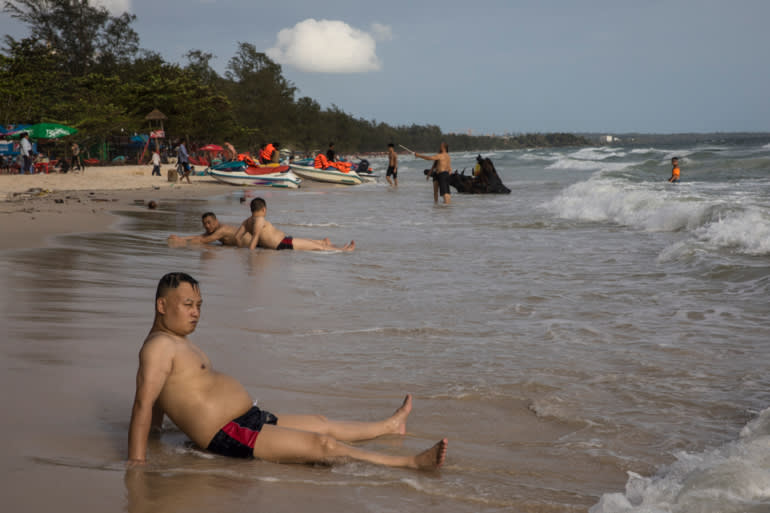 Chinese tourists relax on the beach in the Cambodian coastal city of Sihanoukville in 2018. China has a huge and growing economic presence in the Southeast Asian country.    © Reuters

The challenge for Southeast Asia is how to manage China's impact effectively. The author's meticulous chronicling of China's engagement with each country conveys a sense of varying degrees of comfort and discomfort, often stemming from different development needs and varied policy stances, but also turning on the personal whims of political leaders, which make for sudden twists and turns. Philippine President Rodrigo Duterte completely reversed his country's stance toward China when he assumed office in 2016, backing away from a ruling by the Permanent Court of Arbitration in The Hague on the legality of China's claims in the South China Sea, which was instigated by the Philippines under his predecessor.

Policy differences between states in the region have made it easy for China to push its interests. "China is intensely aware of the rifts and distrust between Southeast Asian nations," Hiebert argues "so it gets away with working with each of them bilaterally rather than as a group to 'divide and conquer' and play them off against each other."

Toward the end of the book, which is divided into chapters on each country's engagement with China, the author offers a few modest recommendations. He argues, for example, that Southeast Asian nations would benefit from working together more closely and in a coordinated manner to mitigate China's encroachment. There seems little chance of this as long as Southeast Asian states find it hard to agree among themselves on a vision for common security. There is also a need for more effective hedges against China, both in the economic and strategic realms. Australia, India, Japan and the U.S. are all proffered as potential balancing forces, though the challenge will be how to match China's wealth and growing military clout. Citing a recent U.S. initiative to support Mekong River states, the author points out that the $44 million in aid pledged by Washington was "only a drop in the bucket compared to the $400 million China pledged just for assistance for small and medium-sized enterprises along the river in 2017."

The book was written before the COVID-19 pandemic and the recent escalation in U.S.-China tensions, which will affect the dynamics of China's expansion in Southeast Asia. The past few months have seen a significant increase in U.S. military activity in the region, which highlights China's relatively weak network of military ties. Balanced against this, China's economy is recovering faster than expected, which puts Beijing in a better position to counter expanding U.S. military clout with a bold plan to support regional economic recovery.

The level of detail in this book makes it a useful and timely reference to the scale of China's entanglement with Southeast Asia More so, perhaps, because it avoids making overly slanted judgments, allowing the facts and the views of those along this new geopolitical frontier to be heard. Missing in large part, though perhaps offering material for another book, are views from China about what this drive southward and westward means for the Chinese Communist Party, for business and for ordinary citizens.

Murray Hiebert's "Under Beijing's Shadow: Southeast Asia's China Challenge," is published by the Center for Strategic & International Studies/Rowman & Littlefield. Michael Vatikiotis is the author of "Blood and Silk: Power and Conflict in Modern Southeast Asia."