It is more than 70 years since the English writer George Orwell's novel "1984" shook the world with its dire warning about a "Big Brother" regime that suppresses personal freedom. Geoffrey Cain's book "The Perfect Police State" argues that this dystopian nightmare now exists in China's Xinjiang region.

"Growing up, I loved dystopian novels by writers like Philip K. Dick," the 35-year-old American author says from his home in Washington, D.C. Dick's "The Minority Report," published in 1956, and later released as a film starring Tom Cruise (2002), showed police using predictive technology to arrest people before they could commit crimes. "But that was science fiction," Cain says. "This is a real-life dystopia."

China's restive Xinjiang region -- long the scene of protests and uprisings against Chinese rule -- is now marked by a network of camps holding around 1 million people, according to an April 2021 report by Human Rights Watch, a New York-based activist group. China calls them retraining centers, but foreign monitors have labeled them prisons, or concentration camps. Amnesty International, a U.K.-based human rights group, calls Xinjiang "a dystopian hellscape."

Early this year, outgoing U.S. Secretary of State Mike Pompeo accused China of committing genocide against Uyghurs and other ethnic groups in Xinjiang. But Cain's investigative book goes further, illuminating the technology that has allowed China to build its totalitarian surveillance state. He offers, as the subtitle proclaims, "An Undercover Odyssey into China's Terrifying Surveillance Dystopia of the Future." A government-installed facial-recognition device to grant residents access to their compound is seen at a gate in the Xinjiang city of Urumqi in May.   © Reuters

Cain's findings reinforce those of human rights campaigners. "We've been writing about Xinjiang and the Chinese government's treatment of Uyghurs and other Turkic communities for 25 years," says HRW China Director Sophie Richardson.

A decade ago, the group was reporting arbitrary arrests, disappearances of Uyghur activists and suppression of religion. But abuses have escalated in recent years, Richardson says, including the creation of large political reeducation camps, identified by HRW in 2018.

"One of the points that we noted was the extraordinary use of surveillance technology," she says. "Authorities were hard-coding repression, and the different types of behavior that were now considered suspicious and could indeed land you in either a formal or an arbitrary detention." 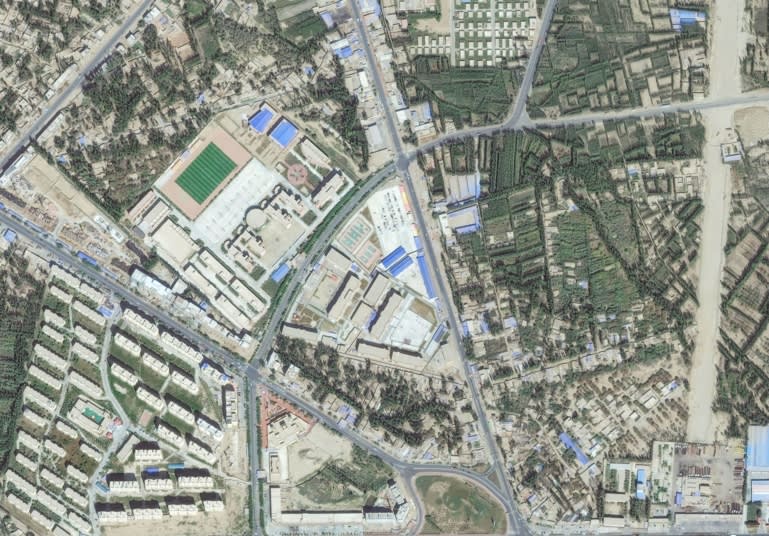 This satellite image from 2018 shows a reeducation camp in Hotan, Xinjiang, for the purpose of indoctrinating Uyghurs. (Getty Images)

Cain talked to many people imprisoned in these Chinese gulags, often for innocuous behavior deemed suspicious by Beijing's high-technology surveillance network, Skynet. This can include reading books, praying, or receiving emails or texts from someone previously imprisoned.

Maysem, one of the central figures in Cain's book, is an exceptional student, who attends university in Beijing, and then in Turkey. On home visits, she watches with trepidation as Xinjiang turns into a police state. Although she is a Uyghur, her father served in the Chinese government, and she defies warnings from friends not to return for family visits. Author Geoffrey Cain spent most of his career as a reporter in Asia. (Courtesy of the author)

"One day in June 2016, she was summoned to the local police office in Kashgar," Cain writes. "After checking her identification papers, the guards held up a smartphone that scanned her face and confirmed her identity. Then there were mandatory medical checks. An officer took her DNA by swabbing her mouth, then drew her blood and checked it in the government database." Skynet had found her.

"How could an Englishman write a book 70 years ago that predicted my experience?" Maysem asked after her eventual release. "George Orwell saw the future. He saw our world, the world of the Uyghur people," she adds.

"Everything that Orwell talked about -- the 'Newspeak' [the tightly controlled language of the ruling party in '1984'], the big screens that show party propaganda, the harsh punishments and concentration camps, and the constant monitoring of a population -- are suddenly amplified," says Maysem. "With technology, they don't need violence. ... They can control a population, brainwash its people, and strip them of their humanity to become subservient." Cain on a reporting trip in the Tian Shan Mountains in Xinjiang. (Courtesy of Geoffrey Cain)

The use of AI, predictive science and mass surveillance is commonplace in the modern world, from targeted web advertising to "smart" homes using advanced technology, mobile phones with facial and fingerprint recognition capabilities, and cameras mounted on walls and street furniture to monitor and deter crime. On its remote western frontier, however, China is testing data-collection systems that in other countries would trigger alarms about the illegal or immoral use of technology.

Cain talks to technology insiders and uses published accounts to detail exactly how this draconian system has developed. China bans Western apps and social media providers such Facebook, Twitter and Google. In their place are state-sanctioned applications such as Weibo (a microblogging platform), and WeChat (a messaging and calling app) that help Beijing keep China's population under constant scrutiny.

Cain spent most of his career as a reporter in Asia, coming to wider notice in 2020 with his debut book, "Samsung Rising," a gripping account of the South Korean technology giant's rise, and the dramatic recall in 2016 of its Galaxy Note 7 phone, which was prone to bursting into flames.

His second book is much wider in scope. It would benefit from more firsthand detail, but that is difficult to gather because Xinjiang is mostly closed to foreign journalists. Cain made several trips to the region, but his book relies mainly on published reports detailing worsening conditions, peppered with individual accounts from people who have escaped the police state. Police officers patrol the Old City district of Kashgar in May.   © Reuters

Cain argues that China's extensive use of surveillance equipment and AI are cause for global concern, in part because of Western involvement in Skynet through investments in companies supplying components.

"I think there's anxiety about the increased electronic surveillance that we're subjected to now around the world," says Sean Roberts, who has researched the region for three decades and is author of the 2020 book, "The War on the Uyghurs: China's Internal Campaign against a Muslim Minority."

Roberts adds: "The things that the Communist Party is doing in China are essentially things that every state has the capacity to do in terms of tracking people. And the question is not the capacity, the question is whether [other states] will actually do that." More than half of the world's 770 million surveillance cameras are in China, according to IHS Markit, a U.K.-based research company -- but millions are sited on the streets of Western countries. 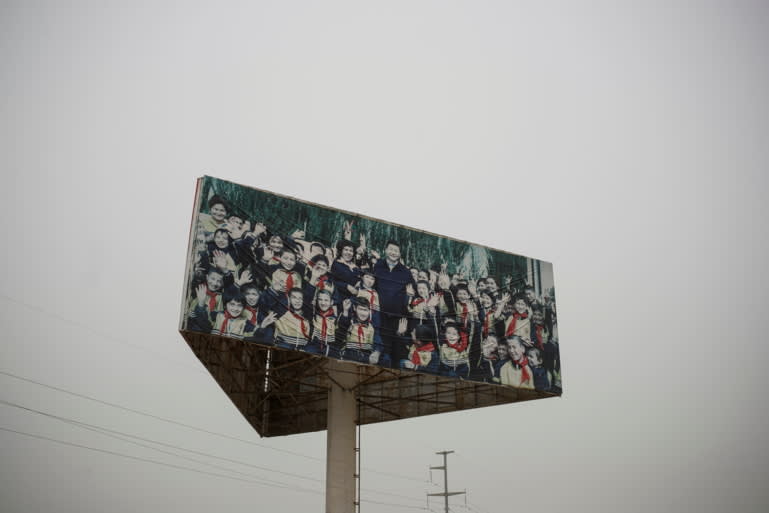 A poster showing Chinese President Xi Jinping stands in an industrial park outside a prison in Kashgar in May.   © Reuters

Roberts also notes how repression in Xinjiang has grown over recent decades. During the U.S.-led global campaign against terror after the 9/11 attacks on Washington and New York in 2001, China claimed Uyghurs were part of an extremist Muslim network, launching harsh crackdowns, including one named "Strike Hard." But the ramped-up repression of recent years has catapulted Xinjiang to international attention, generating increasing calls for investigations and economic sanctions.

The U.S. has been particularly aggressive, levying sanctions on imported cotton from Xinjiang, which produces 85% of China's output, allegedly with forced Uyghur labor, and on scores of companies accused of providing surveillance equipment to China or investing in Chinese companies developing technology used in Xinjiang.

The question, as always, is whether sanctions will make a real difference. "Today, in the world of social media, you see companies being more responsive than ever before to criticism about their entanglement with things like forced labor," Roberts says. "I think that there's a possibility to have impact that way."

Richardson hopes for more, arguing that the increased level of repression in the region over the last five to 10 years provides sufficient momentum for determined and sustained international action. "It's time to hold the Chinese government to the same standards that other governments are held to," she says.