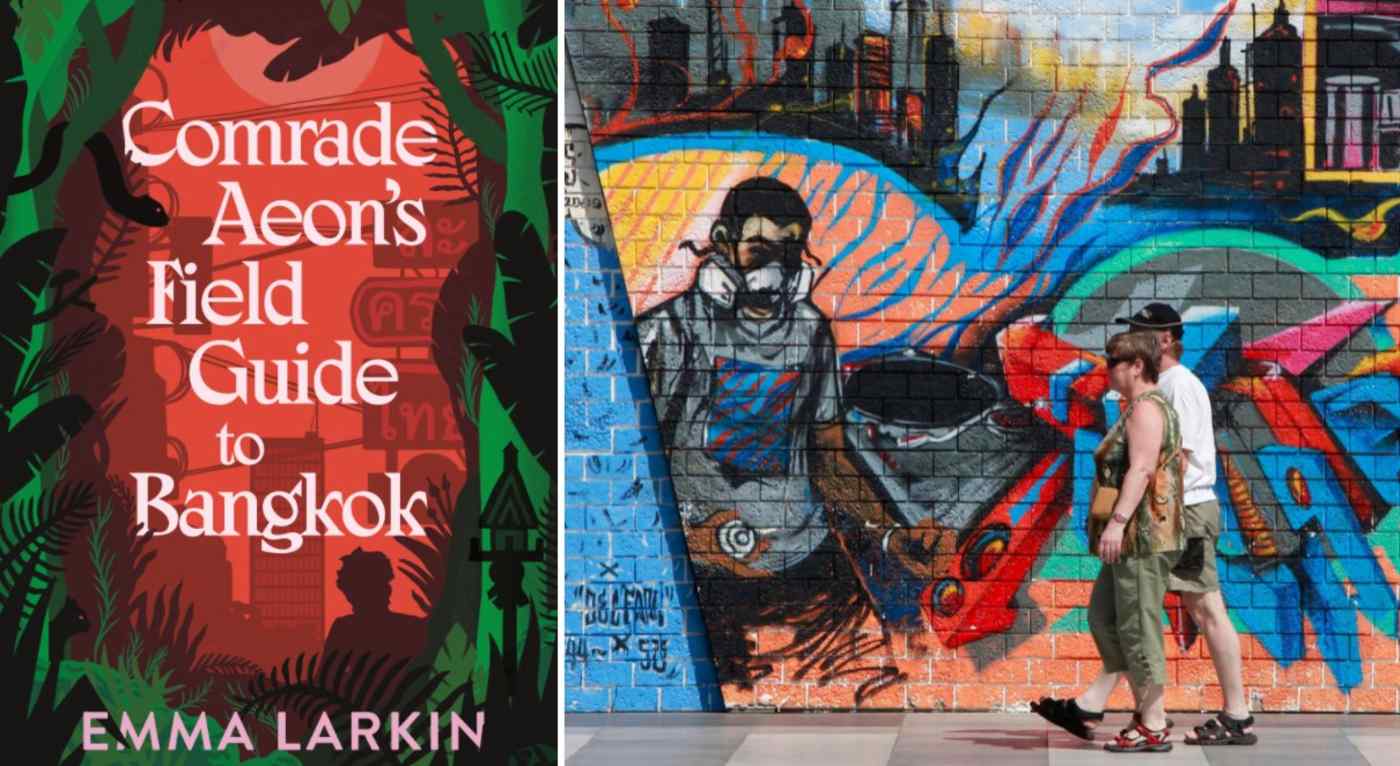 BANGKOK -- In Emma Larkin's wonderfully imaginative and realistically detailed novel, Bangkok is a place intent on burying its own skeletons: political, historical and economic, the skeletons are lying, forgotten, in the swampy land on which gleaming high-rise buildings shoot up to the sky to proclaim the victory of willful oblivion. They are carcasses discarded by Thai authoritarianism and sucked deeper under earth, as has happened in the past three decades, by the inexorable force of capitalism.

"Comrade Aeon's Field Guide to Bangkok" is an achievement on many fronts. As a novel, it skips along without missing a beat between keen-eyed observation and offhand humor, between sober commentary and playful imagination. As an attempt to capture the chaotic DNA of Thailand's capital, Larkin, a longtime resident, manages to find a metaphorical convergence among the city's diverse inhabitants and the hierarchical pecking order they enjoy -- or endure.

Then there are the politics, which course through the veins of the narrative, sometimes with a reptilian stealth not unlike the pythons that slither along the city's sewage, and sometimes with an irrefutable clarity that is nearly blinding.

As an English-language novel about Thailand, "Comrade Aeon" situates itself elegantly on that tricky perch: It portrays some of the most stereotypical "Thai" subjects -- slum life, superstition, lottery madness, the Thai vampire krasue, monitor lizards and TV soap operas, with a cast ranging from alley thugs and market vendors to a former movie star, an ex-communist and a range of befuddled European expats -- all without a hint of manipulative exoticizing or the blase "Western gaze." Perhaps the book's greatest feat is its honesty, a literary quality that has somehow become increasingly rare.

In all, the book should delight Thai culture buffs with its knowledge of its inner workings; and to the uninitiated, will shed light on this complex society and its hidden dimensions. Bangkok at night: To capture the chaotic DNA of Thailand's capital, Larkin, a longtime resident, manages to find a metaphorical convergence among the city's diverse inhabitants and the hierarchical pecking order they enjoy -- or endure.   © Getty Images

Set in 2009, "Comrade Aeon" opens with a prologue in which a middle-aged couple sits engrossed by a live television broadcast of an expedition by navy divers tasked with investigating a sunken shipping container to determine if there are corpses still inside it. The husband and wife are Witty and Wongduan, a high-society couple whose teenage son, Win, disappeared in the smoke and gunfire of the Black May protest in 1992, a political upheaval driven by middle-class discontent against military rule. Win's body was never found, like those of 300 other reportedly missing persons. A rumor that the military may have dumped the bodies in the Gulf of Thailand has forced the navy to act -- but the cargo container yields nothing but a few startled groupers.

Witty is a real-estate developer on the verge of erecting a new edifice in the heart of Bangkok, the only slight glitch being a slum that needs to be uprooted and its poor denizens evicted, by fate, fire or force, whichever most convenient. His wife, Wongduan, is a former film star of the 1960s who, after the loss of her son, has found her new calling as a scriptwriter for TV soap series -- the kind in which noblemen of feudal Siam are embroiled in domestic melodrama with zesty wives, sycophantic mistresses and overbearing in-laws, with fratricide and betrayal thrown into the mix.

Wongduan's latest script, called Broken Shadows, is a rage at Bangkok. In a deft style that nevertheless takes some time for its delicious effect to register, Larkin interrupts her principal narrative with the dialogue from Wongduan's soap, maybe as a winking meta-commentary on the theatrical quality of reality in Thailand. Larkin weaves historical events into her book, including the 1992 Black May anti-government uprising.    © Getty Images

Besides Witty and Wongduan, the book reels out a catalog of characters from all socioeconomic strata. There are the slum-dwellers who now face the threat of expulsion: Yai Sunan, a street-food vendor and veteran of ghetto hardship, and Kongkiat, a community leader who can rally the poor with the ferocity of a political firebrand. This ground-level portrait of the inner-city populace contrasts starkly with that of Ida Barnes, wife of an expat and mother of two spoiled brats, who lives in the "luxurious aquarium" of her husband's glass-walled condo. Deeply bored by her purposeless life -- even a volunteer stint at the national museum does not help -- Ida is mired in an existential crisis that initially gives her suicidal urges and later a habit of exploring the "jungle" that sits in the shadow of her towering condo.

Then there's Comrade Aeon himself.

At first, one wonders how Larkin can tie all these disparate, ambitiously expansive threads together. But by the first third of the book, she finds a perfect convergence for all the characters and thematic sprawl in the "jungle" that Ida sees from her high-rise apartment. It is also the same "jungle" as behind the slum -- a pocket of undeveloped land overgrown with unruly vegetation -- on which Witty is planning to build his new project. It is also the same "jungle" in which Comrade Aeon has made his home for decades after returning from the real jungle, having fled there to join the communist insurgents after the massacre of students by the police and right-wing militia at Thammasat University in 1976. "Comrade Aeon" reels out a catalog of characters from all socioeconomic strata, from slum-dwellers to wealthy expats whose glass-walled condos tower above the urban jungle. (Top: Getty Images Bottom: Reuters)

There, like a subterranean tremor, the three uprisings that defined Thailand's modern politics come together, not in the foreground but lurking like resurrected skeletons behind the characters: the 1976 massacre that drove Comrade Aeon to join the communists, the 1992 Black May upheaval that claimed Wongduan's son, and, since the book is set in 2009, the imminent convulsion of the 2010 crackdown on the Red Shirt protesters, which hangs visibly on the pages.

At one point, Kongkiat speaks to his slum friends about how the poor "are the people who keep this city running" -- positioning himself to join the working-class Red Shirt movement. And Ida overhears a stuck-up expat complaining about those "crazy protesters clogging up the city" and how they "attacked the prime minister's car," a reference to a real incident when some Red Shirts mobbed and bashed the vehicle of the then-Prime Minister Abhisit Vejjajiva, a popular politician among the bourgeoisie. "This country is going to the dogs," the bourgeoise expat quips.

But Larkin is not peddling any political messages. Politics is just one of the forces that shapes the destinies of these people. The tableau of life lived and lost has a real emotional resonance here, especially in Wongduan, a distraught mother who distracts herself -- like most people in this country -- by a nightly escape into prime-time fiction.

Meanwhile Yai Sunan's story of constant struggle against poverty, although a familiar refrain, rings with genuine sensitivity. Comrade Aeon and his obsessive scribbling in his notebooks, which gives the book its title, makes him one of the most intriguing characters in modern fiction about Thailand (it is possible that Aeon, the name suggestive of an entity forged by time, was inspired by a real-life homeless man whose cryptic graffiti, a cross between cosmic diagram, mathematical formula and occult hieroglyphics, made him a news story and even saw him invited to exhibit at the prestigious Bangkok Biennale art festival 2020). Street food in the Thai capital: "Comrade Aeon" evokes realistic details of the ever-evolving landscape of Bangkok in the first decade of the new millennium.   © Getty Images

Larkin, an American expatriate, was born in the Philippines and raised in Bangkok. She is the author of two nonfiction books about Myanmar, "Finding George Orwell in Burma" and "Everything is Broken." In her debut novel, she displays a kind of anthropological authenticity that transcends language, most of all the challenging task of rendering the way Thai people speak through the English words.

"Comrade Aeon" also has the wit and meticulousness to evoke realistic details of the ever-evolving landscape of Bangkok in the first decade of the new millennium. The book's central metaphor -- the undeveloped plot of land stubbornly unperturbed by encircling real estate projects -- is a kind of town-planning absurdity (or for some, a blessing) that all Bangkokians are familiar with. It is a theme that makes us wonder why or how such plots can resist all the countervailing forces.

And the people on these pages, too, how do they resist the weight of history? Wongduan, Yai Sunan, Witty, Ida and Comrade Aeon are all characters haunted by their past, and the politics that troubles their souls is the one that pits the pain of remembering against the numb comfort of forgetting. To dig up or not dig up the bones and the skeletons -- that, in many ways, is also the narrative that characterizes Thailand.

Kong Rithdee is a literary translator, film critic and deputy director of the Thai Film Archive.