BANGKOK -- At the outset of his award-winning career, American journalist Jonathan Kaufman found himself staring at the story of a lifetime. Fresh from college at 23, and working in Hong Kong, he was sent to Shanghai -- one of the first Western journalists allowed into China in the 1970s. It was the start of a lifelong study of China's modernization.

But it was not until decades later, working in Beijing as China bureau chief for The Wall Street Journal from 2002 to 2005, that a familiar but surprising shadow caught his eye. Connecting the dots helped him to produce his fascinating third book, "The Last Kings of Shanghai."

Wandering one day into Shanghai's rundown neighborhood of Hongkew he saw the unmistakable mark of a mezuza -- a case containing a parchment inscribed with religious texts that is attached to the doorpost of a Jewish house as a sign of faith. For Kaufman, who is Jewish, the doorpost revived recollections of his first visit to Shanghai, when he marveled at the scores of magnificent abandoned buildings lining the Bund, or embankment, on the Huangpu River.

"I walked into the Peace Hotel [near the Bund] and it felt like stepping from a black and white movie into the 1930s," he recalls in a phone interview from Boston, where he is director of Northeastern University's School of Journalism. The Peace Hotel, formerly known as the Cathay, was a favorite of stars such as Charlie Chaplin and Laurence Olivier. Noel Coward drafted his play "Private Lives" during a long stay. But in the 1970s, the hotel and surrounding art deco office buildings that once defined the district were deserted. "I was trying to figure out what that meant," says Kaufman.

The connection was the Jewish legacy in Shanghai, and later Hong Kong -- and particularly the Sassoon and Kadoorie families. These are what the book's subtitle calls "The Rival Jewish Dynasties That Helped Create Modern China." The Bund in Shanghai was one of the world's richest districts. (Courtesy of Everett Historical Collection/ Alamy stock photo)

The families were often partners rather than rivals, and shared similar stories of success, as Baghdadi Jews who moved first to India and then to China. David Sassoon was the earlier tycoon. With his eight sons, he created a business empire in China that ranged from property to opium trading. The Kadoorie patriarch Eleazer, or Elly, worked for the Sassoons, later establishing his own family business encompassing power production and hotels, including the luxury Peninsula brand. Author Jonathan Kaufman says he wanted to deliver a book for a mainstream audience and aimed to tell a larger story about the modernization of China. (Author photo courtesy of Glenn Turner Photography)

Kaufman details the rise of the two families, and their rescue of an estimated 18,000 Jewish refugees fleeing the Holocaust, who found a safe haven in Shanghai. Jews huddled in the Hongkew ghetto even during the Japanese occupation of the city, and it was there that Kaufman stumbled on the marks of a mezuza more than half a century later.

Kaufman's two previous books were also Jewish stories: "Broken Alliance: The Turbulent Times Between Blacks and Jews in America," and "A Hole in the Heart of the World: Being Jewish in Eastern Europe." Yet "The Last Kings of Shanghai" is much more than just a story of two Jewish families in China. David Sassoon, seated, with three of his sons in Bombay in 1858.

Kaufman's career blossomed in Boston, where he was part of a team at The Boston Globe that won a Pulitzer Prize, America's top award for journalism, in 1984. He was a finalist for his own work the following year, and as the Globe's Berlin bureau chief he covered the fall of the Berlin Wall in 1989.

But he continually circled back to China, marveling at the country's transformation from the poor backwater he visited in the 1970s to the miracle economy of the 2000s. He wanted to tell the story of China's emergence from centuries of turmoil, through occupation by foreign powers to the rise of the Communist Party and the modern republic. Focusing on the Sassoon and Kadoorie families provided a personal tale of the transition and a wealth of fascinating characters.

"When we write the history of the world, we tend to focus on politicians and generals," he says. "I think there's a kind of dynamism here that business brings to history which hasn't been talked about that much."

Kaufman's timing proved opportune. The Kadoories, the richest Westerners in Hong Kong, had curated their family history in the Hong Kong Heritage Project. Besides mining these previously unpublished archives, he also had invaluable access to diaries from both families. Much has been written about the Sassoons, in particular Victor, the high-flying playboy and party king of Shanghai. His great-grandfather David Sassoon and his sons became wealthy traders in China, controlling an estimated 20% of the opium trade in the 1800s. Victor left his imprint on Shanghai with a series of stunning art deco buildings, including landmark structures along Suzhou Creek, where his 20-story Broadway Mansions became a haughty address. His Embankment House, across the river was even bigger, with a curving frontage that survives to this day.

Both were upstaged by the Cathay, then one of the world's top hotels. "It soared over the Bund," Kaufman quotes an architectural writer of the times as saying, "like an Art Deco rocket ship rising from the Huangpu River." A favorite of stars such as Charlie Chaplin and Laurence Olivier, the Cathay, as it was originally known, was one of the world's top hotels. "It soared over the Bund like an Art Deco rocket ship rising from the Huangpu River," wrote one architectural writer.    © AP

Victor's taste also ran to showgirls and horses. He was a mainstay at the Shanghai racetrack, reportedly quipping: "There is only one race greater than the Jews, and that's the Derby." His parties were the talk of the town. Likewise his affairs, including one with Emily Hahn, a writer for the New Yorker, who was described by a correspondent for Time magazine as "a superb mad woman, brilliant, beautiful ... extraordinarily clever, smokes cigars, talks Chinese, has every man in love with her."

The Kadoories were more grounded in conventional business practices, but were innovators in education, founding schools that bettered the lives of thousands of students in China and Hong Kong. Laura Kadoorie, Elly's wife, moved from England to Hong Kong, but refused to play the part of a sheltered high-society lady. Instead, she joined him in China, and her observations are a delight of the book, culled from her diary of the late 1800s. "It was like reading something out of, you know, Katharine Hepburn," Kaufman says.

"It's an impressive story," says Mark Clifford, a writer and historian in Hong Kong, and an expert on the Kadoories' role in the former British colony. "They are very low-key," he says of the family's contribution to the development of China and Hong Kong. "Hopefully, this will usher in a new era of scholarship, with more coming out." One criticism of the book is that it has too many characters, and tries to cover too much ground. Another is that this story about two icons of the China business world includes little detail about their investment strategies, which is surprising given the writer's background in business journalism. Kaufman says he wanted to deliver a book for a mainstream audience and aimed to tell a larger story about the modernization of China.

"The more I got into it, the more it really became, I guess, two stories, one about the two families, but the other about modernization and globalism, which is how China connected with the world initially," he says. "And so the book evolved into kind of an examination of the ... alternate history of China. Shanghai had been more outward looking, admittedly under colonialism, under imperialism. But there was incredible dynamism as the Chinese were learning from these foreigners about capitalism."

In the book, he writes: "The Sassoons and the Kadoories exploited Shanghai, but they also ignited an economic boom that attracted ... millions of others who found in the city a place to pursue their entrepreneurial dreams as China wrenched itself from a sclerotic, feudal society into a modern industrial one. It was the Chinese who transformed Shanghai, and China. The Sassoons and the Kadoories helped light the fuse." 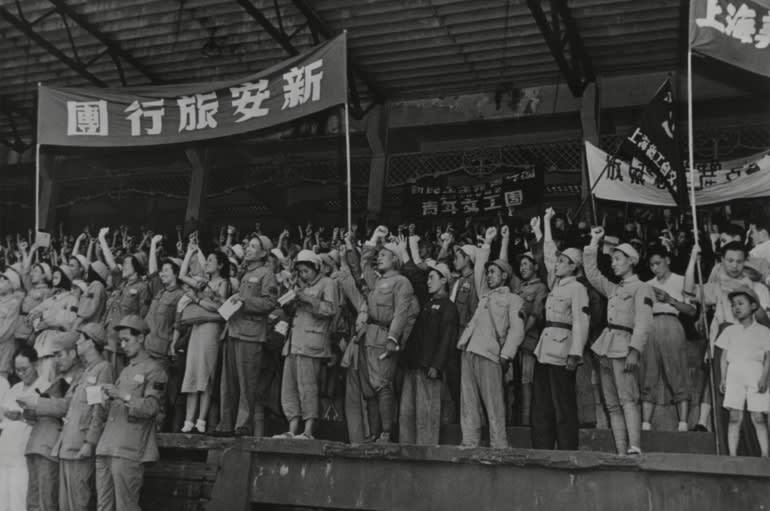 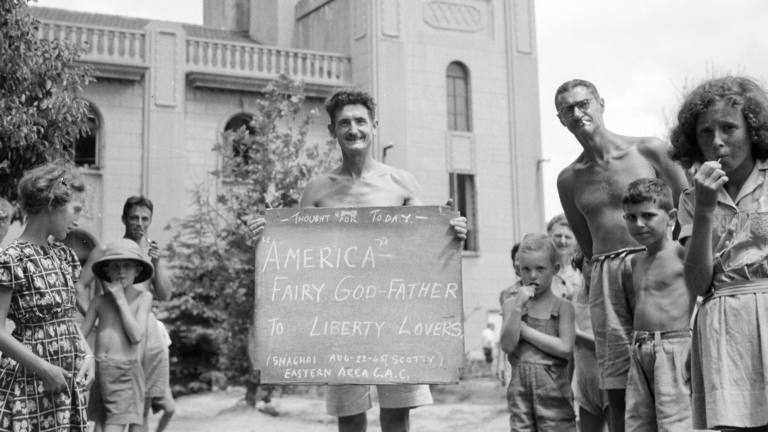 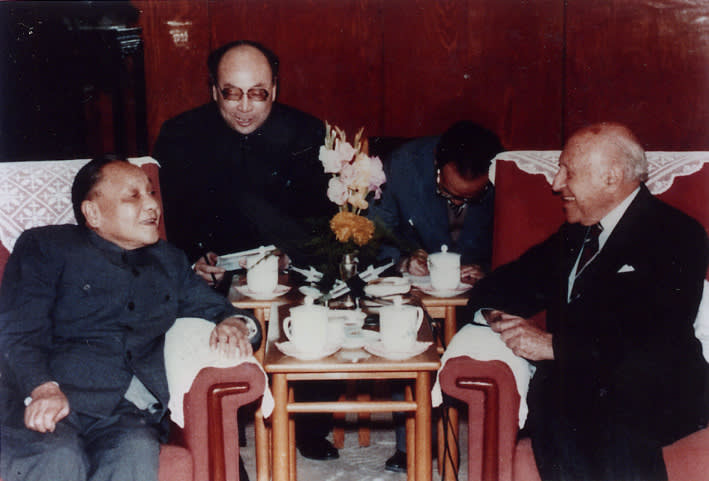 Yet it all came crashing down as corruption and poverty brought the communists to power. The foreigners were locked up and expelled. Victor Sassoon fled, leaving a fortune in Shanghai, never to return. The Kadoories rose again in Hong Kong, where they helped the colony to capture some of the vitality of Shanghai of the early 1900s.

The last section of the book illuminates some little-known achievements of the Kadoories, including loans to Hong Kong farmers, many of them refugees from the communists in China. Visitors to this city of electrifying high-rises nowadays have little sense of how fragile Hong Kong was while rebuilding after World War II.

The Kadoories spent lavishly on increased self-sufficiency, and are widely credited with revolutionizing pig production. Kaufman repeats a Chinese joke: "The Kadoories know everything about pigs, except what they taste like." Pork is forbidden by Jewish tradition.

Kaufman also wonders about history repeating itself. Shanghai taught a hard lesson about diversification. The Kadoorie fortune is estimated at over $10 billion, but much of it is tied up in Hong Kong, facing increasing Chinese control after a year of protests. "They have to be wondering, could this be Shanghai all over again?"