"A Passage North," the second novel by Sri Lankan writer Anuk Arudpragasam, describes two journeys by its protagonist Krishan. One is a physical trip north from the Sri Lankan capital, Colombo, into the killing fields of the former civil war between the government and the separatist Tamil Tigers in the island's northeast. The other is an internal voyage into Krishan's memories and musings on love, life, politics and conflict.

Readers who were gripped by the urgency and passion of Arudpragasam's first novel, "The Story of a Brief Marriage," which portrayed the massacre of civilians and defeat of the Tigers in the final weeks of the war, may find there is too much of Krishan's mind-journey here and not enough action or description in bringing the other characters to life.

Arudpragasam is not only a celebrated young Tamil novelist writing in English -- "The Story of a Brief Marriage" won the DSC Prize for South Asian Literature -- but also the recipient of a Ph.D. in philosophy from Columbia University. "A Passage North" has been longlisted for this year's Booker Prize.

At first, the author's intense examination of how we perceive the world is engaging if not always strictly necessary for the progress of the story. His perceptiveness about aging in the beautifully drawn character of Krishan's ailing grandmother Appamma, as well as his description about the complicated love affair between Krishan and the bisexual Anjum, shows that his talent is as much in observation as in mining his autobiography.

"Ever since he was old enough to follow the news he'd been hearing of people dying in abrupt and unpredictable ways -- in road accidents and race riots, by snakebite, tidal wave, and shards of shrapnel -- and it had never really occurred to him that for most people in most places, even Sri Lanka, death was a process that began decades before the heart stopped beating, one with its own logic and trajectory," he writes. 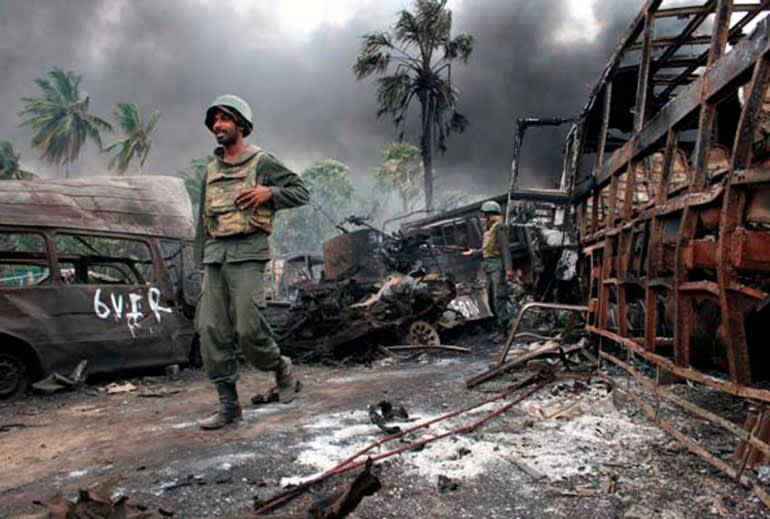 Sri Lankan government troops survey the wreckage after a battle against separatist Tamil Tiger rebels near the town of Mullaittivu in 2009.    © Reuters

Old people, Krishan realizes, "began acting with increasing restraint and participating in life more selectively, a decrease in participation that was not so much a personal decision as the defining feature of aging: of the slow, meticulous process by which the same body that once moved so freely and easily between environments begins, gradually, to withdraw from what is called the world."

The story hinges on the death of Rani, Appamma's former carer. At the start of the novel Krishan receives a telephone call from Rani's daughter informing him that her mother has fallen headfirst down the well in her home village in the north and broken her neck. Krishan resolves to make the "passage north" of the title by train to attend the funeral. As in his first novel, Arudprasagam here explores the lasting trauma of Sri Lanka's civil war as well as the nature of love.

Krishan had came across Rani in a hospital when he was working for an aid organization in the northeast in an attempt to expunge his guilt about not having suffered directly in the war that afflicted his fellow Tamils. Rani undergoes therapy in a psychiatric ward -- including electric shocks -- for post-traumatic stress disorder and severe depression because she was "plagued by endless thoughts of her sons." The eldest son was killed fighting for the Tamil Tigers in 2007 and his 12-year-old brother died from shrapnel wounds on the penultimate day of the war in 2009. Rani is hired by Krishan's family in Colombo, partly to remove her from the site of her trauma. She becomes a valued companion for Appamma and restores the old woman's mental and physical health before returning to her village.

The story, or rather Krishan's introspections, are therefore about coming to terms with -- or the difficulty of coming to terms with -- the violence of war and whether those who suffered can ever fully recover. We learn almost in passing that few Sri Lankan Tamils can avoid thinking about the topic despite the Sinhalese-dominated government's attempt to erase any record of the Tamil Tigers. In Krishan's case, his father was killed by a Tamil Tiger bomb at the central bank in 1996 and Appamma's younger brother, now living in London, had to go into exile because of his record as a Tamil separatist in Jaffna. Krishan concludes that the depressed Rani, "physically located in a world that was shorn of the people she loved and unable therefore to participate in it," either killed herself or became so deliberately careless of her life that she allowed herself to tumble into the well.

War and trauma are not the only themes. In the subplot about Krishan's past relationship with Anjum in Delhi -- his memories of that are also triggered at the start of the novel by an email from her out of the blue -- there are sociological and political diversions on South Asian family life, Hindu nationalism, racism among lighter-skinned north Indians against the darker Tamils of the south, and the aggressive chauvinism of the men who stare at women on the streets and metro trains of Delhi. 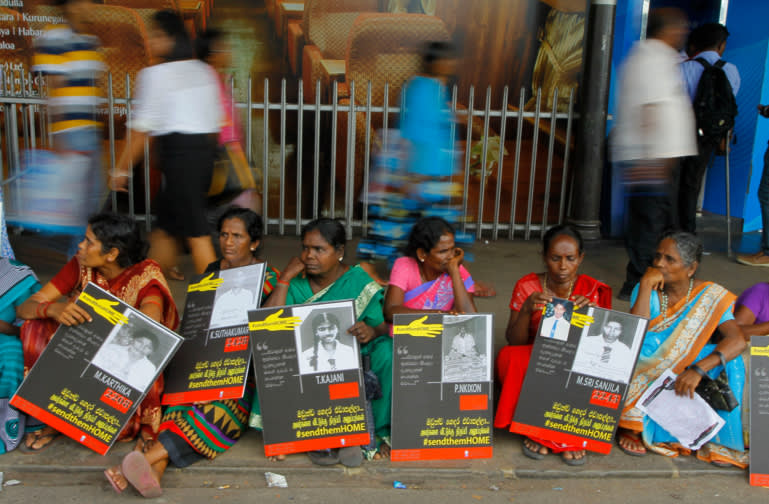 Ethnic Tamil women hold placards with portraits of missing relatives during a protest outside a railway station in Colombo in 2015. In Arudpragasam's book, we learn almost in passing that few Sri Lankan Tamils can avoid thinking about the war despite the Sinhalese-dominated government’s attempt to erase any record of the Tamil Tigers.   © AP

But the unresolved love story feels curiously disconnected from Rani and Sri Lanka, linked only by the notion that the self-effacing Krishan engages in aid work in Sri Lanka because he admired and envied the alluring Anjum's commitment to a cause as an activist helping women in the Indian state of Jharkhand.

The problem for the reader is that Krishan's (or Arudpragasam's) marijuana-fueled philosophizing at times veers perilously close to being too wordy, even banal, despite some memorable insights on love, life and death. Krishan compares himself to Poosal, the poor man in the ancient Tamil epic poem, the Periya Puranam, who has no money to build a temple for his beloved god Shiva and so builds a temple in his mind. It is so magnificent that Shiva tells the king of the land he cannot attend the opening of the monarch's own temple because he will be in Poosal's village for the inauguration of the "mind-temple." The king makes a pilgrimage to the village and falls to the ground in praise of Poosal and his devotion.

If Krishan is an unsatisfactory protagonist for a novel about war, death and love, it is partly because he is much too nice, too reasonable, too considerate and without any obvious failings. Nor are there any unpleasant characters to challenge him or offset his relentless thoughtfulness. There are bad events suffered by the novel's characters in the past, but no bad actors. One almost longs for a flawed hero, or even a villain, to shake Krishan out of his melancholy reflections -- an irritable king to come and punish Poosal for stealing his thunder.

Victor Mallet is a journalist and author of "River of Life, River of Death: The Ganges and India's Future" (OUP). He was South Asia correspondent for the Financial Times (2012-16) and is now the FT's Paris bureau chief.