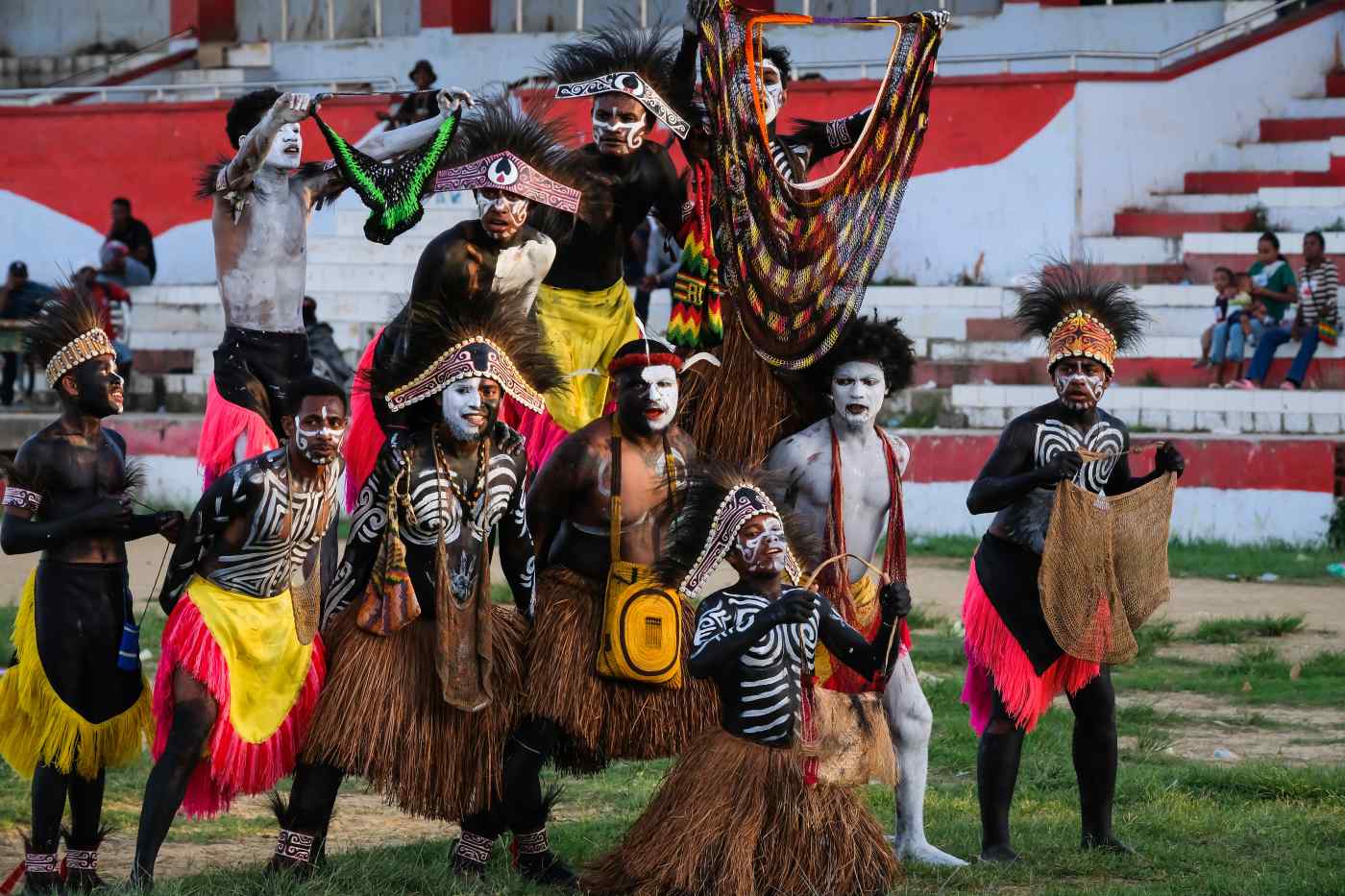 SORONG, Indonesia -- A group of slender yet muscular youths clad in straw loincloths, their bodies adorned with swirls of white paint, recently marched in formation onto the modest sports field in Sorong, a coastal town in the eastern Indonesian province of West Papua. As they approached, people crowding around stalls selling the famous hand-woven bags of the region lifted their heads and moved onto the stone podiums surrounding the field.

Proud and charismatic, the painted youths started shaking in the traditional dance styles of Irian Jaya, the Indonesian half of Papua island. As they jumped, ran and twirled in circles and in single file, they raised the intricately woven noken bags, a symbol of their Papuan heritage, high in the air.

The dances of Sorong's first Festival Noken held last December to mark Noken World Day, are just part of a growing series of events and projects focused on bringing threatened and under-appreciated Austronesian cultures into the limelight.

"The first Festival Noken is a grassroots attempt to celebrate the culture and identity of Indonesian Papuans through a showcase of our traditional dances, costumes, and noken handicrafts," said Joanna Kamesrar, a Sorong resident and the festival's main organizer. Besides the traditional dances, the outdoor event had a small area dedicated to the sale of noken bags, and featured an ethnic fashion show in which men, women and children paraded in traditional clothing.

The noken is a knotted or woven bag hung from the head and used to carry goods, and even babies. It was inscribed by UNESCO as intangible cultural heritage of Papua and its Indonesian provinces in 2012. "It's easier to see people wearing and using the noken, a symbol of our national heritage, in the provincial capital Jayapura. We wanted to organize this showcase in Sorong to demonstrate that appreciation even here in the western part of Irian Jaya," said Kamesrar. Even without local sponsorship, the festival's launch drew plenty of spectators, encouraging the organizers, who are planning to repeat and improve the event later this year.

Festival Noken is one of several artistic and musical projects focused on highlighting indigenous cultures across the Asia-Pacific region. One prominent example is the Rainforest World Music Festival, an annual event in Kuching, the capital of Sarawak in Malaysian Borneo. After 13 festivals in as many years, it has become one of Asia's premier world music events, and has helped bring young local artists, such as mixed indigenous Kelabit and British-Italian Alena Murang, to the attention of an international audience. The Festival Noken showcased the work of several Papuan women who set up their noken bags for sale at the event. (Photo by Kit Yeng Chan)

The Kuching-born musician has adapted the traditional sounds of the sape, the stringed lute-like folk guitar of the indigenous Orang Ulu people, to modern sensibilities. The Orang Ulu, or "upriver people," are former headhunters who still live in longhouses along the Baram river. "I don't try to preserve or save culture, but to keep heritage alive in the present day," Murang, 28, told the Nikkei Asian Review. 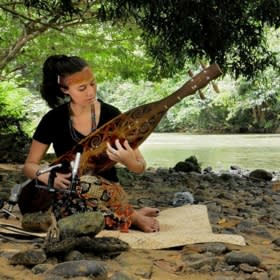 Alena Murang, one of the first women to take up the sape, performs in Sarawak for the documentary "Small Island Big Song." (Courtesy of Tim Cole)

One of the first women to take up an instrument traditionally reserved for men, Murang broke an ancient social taboo, and helped to revive a dying tradition. "I think that arts provide accessible ways for people to understand a topic or a community, and are the best language to bridge the understanding between those who wouldn't normally talk to each other," she said.

Murang's most recent project is the music video of "Re Lekuah," an old Kelabit folk song about working hard to get by, and the first music video ever recorded in the Kelabit language of her ancestors. Released online on Feb. 21, marking United Nations' International Mother Language Day, "Re Lekuah" follows a young indigenous woman as she navigates her own heritage in the modern world, using the Kelabit language to celebrate its remaining 4,000 speakers. The customs and language of this south-eastern Sarawak highland tribe are fast disappearing in the face of the dramatic transitions forced on them by logging, Catholic evangelization, and fast-paced modernity, she said.

"In Kelabit and in many other indigenous languages of Borneo, there is no word that translates into 'art' or 'music'," said Murang. "Arts are instead conceived as functional parts of everyday life." She learned the original song in a longhouse from Tepu Doo' Ayu and other elder Kelabit women, some of whom still wear the tribe's traditional heavy brass earrings and sport elongated earlobes.

"Re Lekuah" is Murang's collaboration with another young woman artist, Canadian-Vietnamese filmmaker Ashley Duong, who has worked with Kelabit communities for the past five years, producing the award-winning documentary "A Time to Swim," about a returning Kelabit exile, in 2017. "Indigenous cultures are so often framed as something of the past, and need to create their own cultural stronghold, which is why I'm interested in amplifying the work of people like Alena, who are heading in that direction," Duong said. Ashley Duong, left, with a Kelabit elder in Sarawak. (Courtesy of Alena Murang)

"We both wanted to show that these cultures are still alive, growing and modern. And rather than just standing stiff in a museum, we could explore how cultural preservation can be fun, and even sexy, through a music video," said Duong. "Art has an important role in its ability to imagine a future for indigenous cultures that goes well beyond merely preserving them."

Alena Murang is also among the artists participating in "Small Island Big Song," a documentary by Australian music producer Tim Cole and his Taiwanese partner BaoBao Cheng. The film documents their voyage to collect the fragments of a global Austronesian "songline" spanning the heritage of Southeast Asian, African and Austronesian island nations. In cultures without literacy, according to Cole, practical knowledge of how to maintain communities in harmony with their environment is stored and passed down by generations through the use of song. 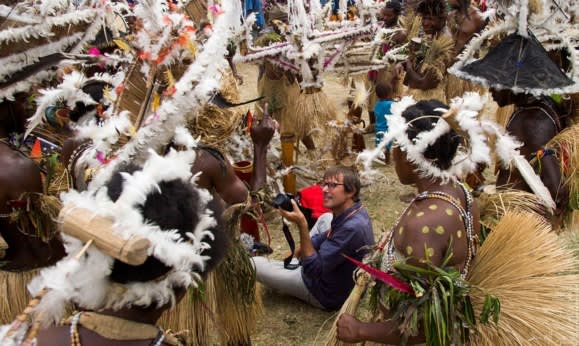 "The idea behind 'Small Island Big Song' is to create a songline that unites the cultural voices of the Pacific Ocean," Cole said. "I felt I should be using my skills and resources to record the songs of endangered island nations, to put the voices of their communities -- who will be the first to lose their homelands because of climate change -- on the world stage."

"We worked with well over 100 musicians and collected around 50 sessions, which I edited and produced into one soundtrack of 18 songs, a real oceanic songline," explained Cole. "We approached respected profiled artists with one foot in the past continuing their traditions, and the other in the present -- with a contemporary music career and a vision for their culture in the future -- and we asked them to sing in their traditional language, only using traditional instruments."

Cole wanted to film the musicians in natural locations on their traditional lands, so that the project could also capture the sounds of nature, another unique aspect of each island's heritage.

The documentary won the Best International Project award at the Asian Side of the Doc international documentary film festival, held in Bangkok on Jan. 30. For the rest of the year, Cole and Cheng are embarking on a world tour with a head-lining main stage musical act, including appearances at the South by Southwest Festival in Austin, Texas in March, and a series of European dates scheduled for the summer.

Cole hopes their project will help people not just realize the importance of indigenous cultures, but also raise awareness of each individual's responsibility toward the Earth. "We want to be part of the greater momentum of people, groups and communities that acknowledge we are failing in our role as our planet's custodians," said Cole. "We believe we aren't listening to the Earth's true story. It's time we redefine ourselves, and I hope that 'Small Island Big Song' can be the soundtrack to that process."