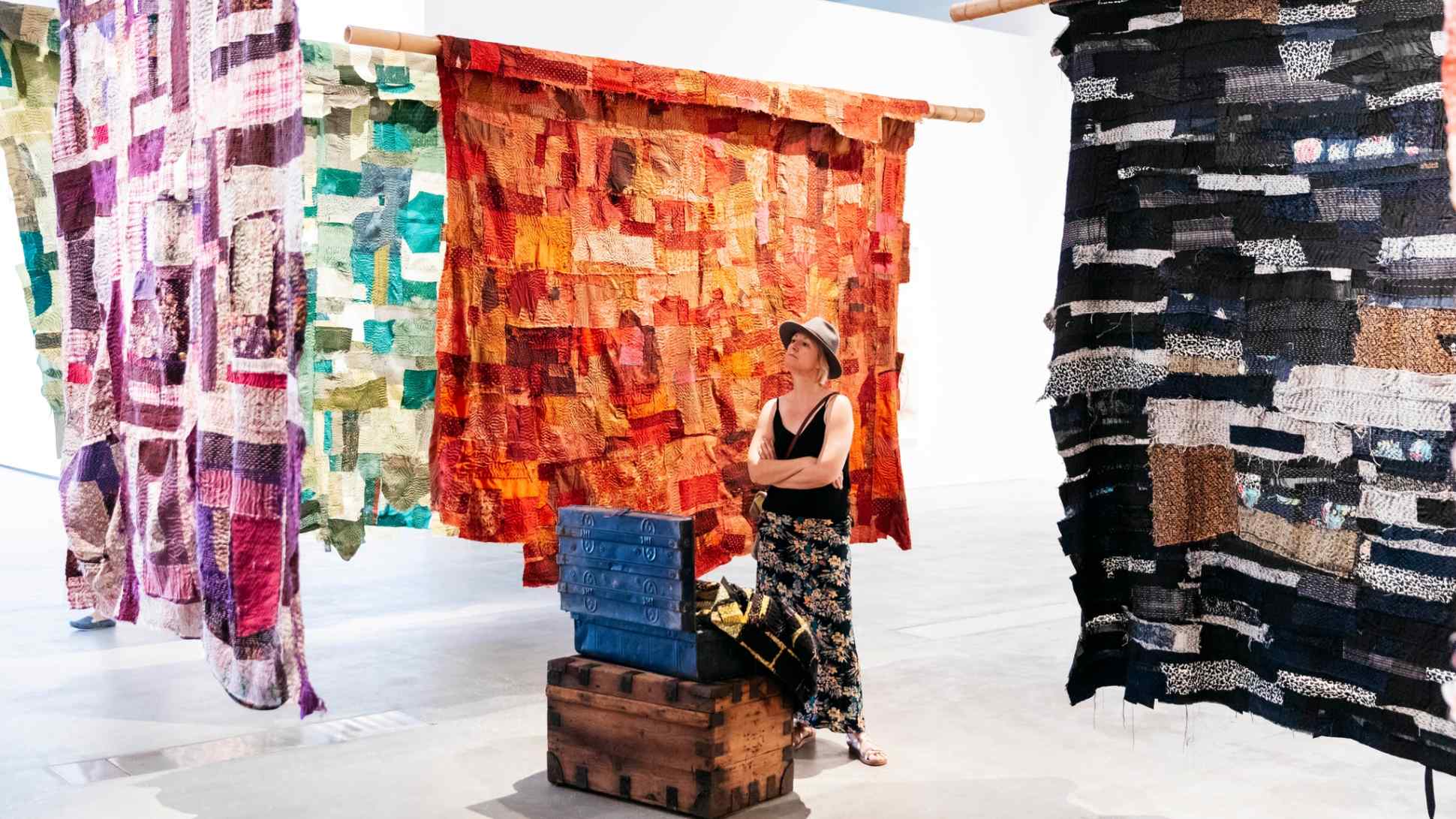 "18/28: The Singhaseni Tapestries," a work by Jakkai Siributr shown at APT9, is a family tale of political persecution in Thailand told through patchwork and embroidery.   © Josef Ruckli, QAGOMA
Arts

BRISBANE, Australia -- After visiting the first edition of Brisbane's triennial celebration of regional contemporary art in 1993, the eminent Singaporean critic T.K. Sabapathy was impressed by what he saw, and also a tad jealous.

"The Asia Pacific Triennial recently convened in Brisbane provides useful lessons," he wrote in a paper lamenting Singapore's then listless art institutions and anemic attempts at regional exhibition-making. "Yes, it was a blockbuster event. Why was this so? Because there was vision, because there was purpose, because there was drive," Sabapathy noted.

Anyone attending the ninth Asia Pacific Triennial of Contemporary Art (APT9) in Queensland's capital is likely to reach a similar conclusion: The vision, purpose and drive propelling one of the world's most ambitious free art showcases is palpable. Exploring its bright and breezy riverside venues -- the Queensland Art Gallery and the neighboring Gallery of Modern Art -- collectively known as QAGOMA -- on a recent quiet morning, it could be sensed in all directions: in the programming of the cinematheque -- a movie house focusing on art films -- the multimedia activities at the children's art center, the breadth of the library, and, most importantly, the understated chutzpah of the exhibition itself.

The diversity of the 400-plus artworks -- paintings, installations, videos, sculptures and craft-based objects from more than 80 individuals, collectives and groups and over 30 Asia-Pacific countries -- is staggering. A wall of shell-encrusted cane rings here, a parade of fantastical porcelain sculptures there. Grandiose works, demure works, everything in between. Themes as disparate as oppression and resistance, climate change and social conditioning. It is as if some fantastic treasure chest has crashed violently out of nearby Moreton Bay and spilled its gems across a smart slice of the Brisbane River.

However, while the passion propelling APT -- a show that is key to QAGOMA's collection-building mission -- has barely faltered in a quarter of a century, the art world has changed. Bankrolled by Queensland's state government and corporate Australia, APT9, which runs until April 28, now competes with a rash of recurring art surveys in the region, many of which are tenaciously rethinking old biennial-triennial formats for today's audiences.

And while APT has arguably done more than any other enterprise to overturn the image of Asia-Pacific art, and to galvanize it and assimilate it into the international art world, it is no longer the only trailblazer. Take Singapore, for example: Since Sabapathy's comments in the early 1990s, its public art institutions have begun acquiring, exhibiting, promoting and cataloging Southeast Asian art with similar rigor and vim.

Amid this changing art world, APT is doubling down. It continues to blur the line between historically Western-centered notions of contemporary art and the region's vernacular art-making traditions, and to enlist both established regional artists and relative unknowns with ancestral roots in its rich indigenous cultures. Like most previous editions, APT9 boasts no overarching theme or rationale, but has a hugely generous, almost anthropological scope that is itself a guiding principle. "We're always trying to unfold parts of Asia and the Asia-Pacific that audiences may not yet have seen and bring it to their attention," said Zara Stanhope, QAGOMA's curatorial manager of Asian and Pacific art. This continuous act of unfolding has roots in Australia's Aboriginal rights movement and attempts to reconcile its multicultural present with its colonial past, and pivots, above all, on a borderline utopian and neighborly notion of diversity and inclusiveness -- and a willingness to confront the conversations and frictions that notion generates. "APT claims to be about the whole region, but you can't possibly try to be or want to be encyclopedic or comprehensive, so there's always that frisson," Stanhope added. There are moments when the unlikely coming together of seemingly unrelated works delights. Lahore-based Waqas Khan's diaristic abstract paintings on wasli paper sit near "Tungaru: the Kiribati Project," a rhythmic display of fish traps, swords and headdresses resulting from a collaboration between New Zealander Chris Charteris and the people of Kiribati, an island state in the central Pacific. "APT articulates contemporary art through alternative perspectives, outside of the predominant Euro-American centered view," said Zico Albaiquni, a young painter from Bandung, in Indonesia. "There is a fundamental attempt, and a quite radical one, to reread how artworks are presented to the public." Commissioned especially for APT, his mural-sized realist paintings number among APT9's loud and riotously colorful works, which glower and pop in foyers, corridors and open spaces. 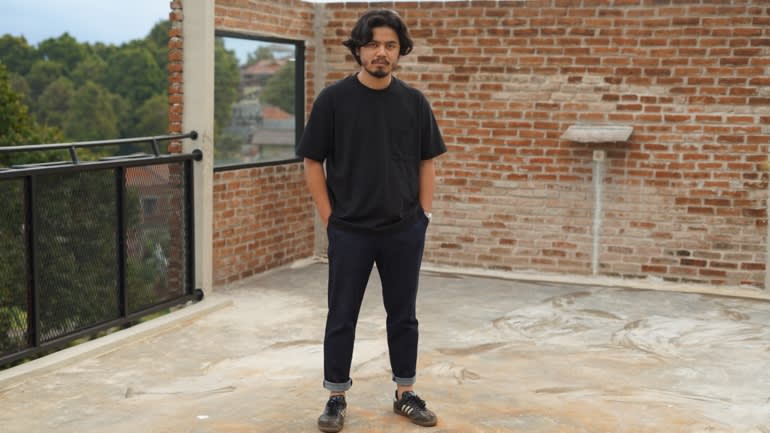 Other crowd pleasers include "In Pursuit of Venus [Infected]," Lisa Reihana's cinematic reimagining of Captain Cook's voyages -- a QAGOMA acquisition from 2015 -- and Jonathan Jones' "Untitled (Giran)," a murmuring wall of more than 2,000 winged stone tools in kinetic flight. A glut of biting sociopolitical works is also on display, from Shilpa Gupta's mesmerizing "For, In Your Tongue, I Can Not Fit," a sound installation voiced by 100 imprisoned poets and revolutionaries, to Jakkai Siributr's "18/28 The Singhaseni Tapestries," a family tale of Thai political persecution, told through patchwork blankets and embroidered garments. Jonathan Jones' "Untitled (Giran)" is the result of a collaboration with two indigenous Australian groups, the Wiradjuri and Kamilaroi.   © Josef Ruckli, QAGOMA

"This APT seems to amplify the craft-based elements in contemporary art practice across the region," said Anne Noble, a New Zealand artist who featured in the first APT and this time contributed a striking photo- and installation-based meditation on the modern plight of the bee, complete with a buzzing live hive. Summing up APT9's vast conceptual terrain, Stanhope said she sees "a really strong vein of abstraction, and a lot of beauty and humor." Other works tackle the natural world and human or natural vulnerability, or, she added, "push against mores, sometimes in a cultural sense and sometimes in the political or national sense of the word." Anne Noble poses with her APT9 artwork "Museum: For a Time When the Bee No Longer Exists."   © Josef Ruckli, QAGOMA

Since 1993, when APT emerged under a broad rubric of "Asia-related" projects initiated by former Australian Prime Minister Paul Keating, the country's engagement with Asia has faltered on some fronts. However, Stanhope said that the institution can see APT going on forever, although the format itself is under constant revision. "The question is: How does QAGOMA make sure we're not doing something that is becoming outdated and becoming less relevant, not just to the region but artists as well?" she said in an interview.

Already her team is beginning preparations for APT10. "We may put our resources into a smaller number of artists and enable those projects to be well resourced, larger scale representations," she said. "A more participatory, audience-focused approach" may materialize, as well as some online works. "We live in such a digital world that it's great to see material practice, but then again there are artists working in other ways," she said, adding: "We also feel that we haven't given all there is of the Pacific due attention yet." The voices of 100 persecuted poets and iconoclasts cry out in Shilpa Gupta's "For, In Your Tongue, I Cannot Fit."   © Natasha Harth, QAGOMA

To justify APT's budgets and staff QAGOMA must consistently prove its worth in soft-power terms by building a collection that feeds into its other programming -- it currently stands at over 17,000 artworks -- boosting Queensland tourism and shaping the contours of art-historical inquiry. On an experiential level, however, APT's trump cards -- what keeps it relevant and distinguishes it, say, from the often overbearingly academic Singapore Biennale -- are arguably its subtle, evenhanded curation and its nurturing of relationships with far-flung artists and art communities.

It is not just a platform for showcasing and historicizing art, but also a catalyst that excites and inspires its creators. For Thailand's Siributr, "It was refreshing to see jewelry and woven mats and craft-based work alongside contemporary works." And as Albaiquni put it: "APT has given me new insights into how art can be made, and how artists deal with the issues around them. It also distances us from the big idea of art, but takes us closer to things that are common in other people's cultures and histories. It's fascinating to see this tension: the familiar and the alien together in the same room."