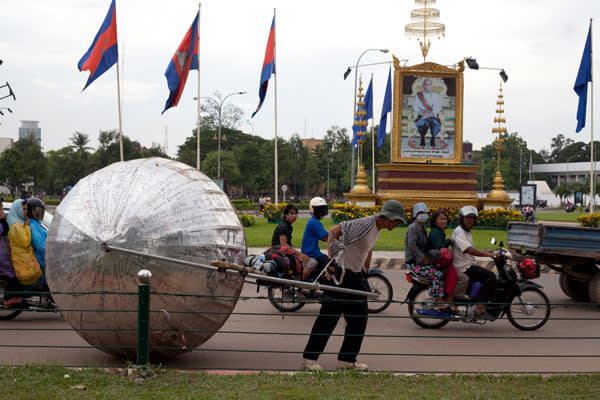 PHNOM PENH -- Abstract expression, that nihilist art from 1950s New York, is alive and well -- in Cambodia. Crowds gather regularly in the provincial town of Battambang to witness "live painting" by students who fling colors, glitter, glue, paper scraps and even metal chains onto large public canvasses. And this year, representatives from a nation that has only two art schools, offering no formal courses on Western traditions, a single operating lithography press, and not one serious commercial gallery, have been invited for the first time to both the Venice Biennale and Germany's equally prestigious Documenta.

At the German show, a member of Phnom Penh's Art Rebels collective will be screening his controversial videos -- some documenting the artist pouring buckets of sand over his head beside tropical lakes obliterated by landfill. "We try to have our own Cambodian identity yet explode with the rest of the world," said Leang Seckon, a veritable Renaissance man who dances, and designs costumes, jewelry, traditional temple architecture, and sculptures such as a floating, 2km long "Naga" snake made out of recycled plastic bottles. He also produces large paintings that command as much as $50,000, mixing images of Khmer statuary with Jackie Kennedy, Wi-Fi symbols and construction sites. "Artists have to be the ones who fly with their imaginations and see everything in society below," he said.

That Cambodia has any visual output at all is something of a miracle, considering that an estimated 90% of the country's working artists were targeted for extermination by the Khmer Rouge, which took power in 1975. "Even in 2005, there was no work at all," said Nico Mesterharm, a German filmmaker who runs Phnom Penh's Meta House gallery. "But now people know that exoticism is not enough -- they want to be shown not just because they are Cambodian but because they are good." Despite ongoing financial and cultural obstacles, Cambodian contemporary art is coming of age, impacting international art sales and tackling national development issues.

"There was not one Cambodian in the Asia-Pacific Triennale for the first 18 years," said Erin Gleeson, head of Sa Sa Bassac gallery (also home to the only library of contemporary art) and a promoter of local art for nearly two decades. "Then, in 2013, a lot of excitement was created by The Season of Cambodia festival, staged in New York. But now the scene has matured. Concentrating on the environment, corruption and connection to nature, today's emerging artists are like philosophers, people who think deeply -- only they do it through means other than writing."

This small, if fiercely devoted younger generation, are slowly moving beyond foreign sponsorship -- and, more importantly, also freeing themselves from repeating stereotypical memorializing of the genocidal past. In dilapidated condition, the White Building, once a model development where performers lived, still houses a project run by Cambodia's "Art Rebels." (Photo by John Krich)

"The pressure of our history breeds creativity," said Siem Reap-based conceptual artist Svay Sareth. "But please don't put my work in a box, we'll all be in a coffin later." Sareth, who discovered his love of drawing during 13 years in a refugee camp, said: "Sometimes art is reflection, sometimes provocation. But only through this path do we find freedom without limits."

One collective called Jor Ng Jam ("To Remember") still examines the dark period, often in dark colors and largely for exhibitions overseas. And many works still include recognizable references to the fanatical former regime: pineapples with eyes, or the checkered patterns of peasant scarfs worn at the time. To Lim Sokhalina, a photographer who documents fences and barriers that wall off wealth and privilege, "the stories of the 'killing fields' will always be inspiring, we are different because of that but we live now." It is sometimes the political elite itself, observed Dana Langlois, founder of the Java Cafe Gallery, that, in order to show separation from prior eras, "keeps asking if the work is 'Khmer Rouge' enough."

However, in a place where, in Gleeson's words, "just having a video camera is a political act," censorship in the visual arts has been minimal. So is arts funding. But many artists also see hope in younger, foreign-educated members of Cambodia's elite becoming patrons and commissioning daring works to decorate new luxury hotels -- such as the Jackson Pollock-like smears of Battambang's Pen Robit. Sculpture made of plastic bottles (Photo by John Krich)

At Java Cafe, a recent "Object(s) of Collecting" show was the first borrowed entirely from local art buyers -- many personal friends of the artists -- organized by young curator Kheamsey Yean-George, who has vowed Cambodia can "bomb the world with beauty the way we were once bombed."

Ironically, the country's newest experiments in art incubation are within walking distance of Phnom Penh's Tuol Sleng, the Khmer Rouge interrogation center turned Torture Museum. Meta Moeng, trained in business management, has just opened "My Space" in a two-story, wooden longhouse down a back alley. Here, art students network, hold workshops and research while the upstairs, once refurbished, will be offered for residencies to artists. "We have to be strong and continue what the foreigners began," she vowed. "So long as my heart is in it, I believe others will join my journey."

Meanwhile, the Art Rebels -- Stiev Selapak in Khmer -- are setting up shop nearby after nearly a decade of offering classes, talks and residences in the cramped, if symbolic, surroundings of the so-called White Building. Once a focus for craftsmen and performers, this initial planned modern development of Phnom Penh from the 1960s stood near Cambodia's National Theater, later burned down. After the fall of the Khmer Rouge, artists returned to squat in the White Building's slum-like ruins, still a source of controversy as a Japanese developer copes with how to best relocate or compensate angry residents. 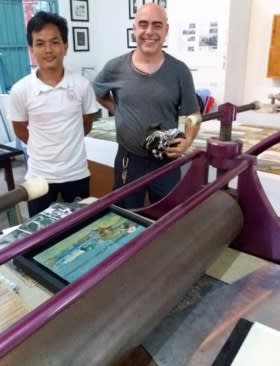 At the same time, Cambodia's National Gallery, largely housing Angkor Wat relics under a roof once inhabited by thousands of bats, recently opened a single room of space to a show of "reBIRTH reVITALISE reGENERATION" -- with more realistic works of mostly Soviet-bloc trained professors next to those of their students. According to Langlois and others, the Gallery has agreed to keep this as a space permanently dedicated to modern works.

This has the art community quietly whispering, and dreaming, of a future contemporary museum similar to the one long fought for in Bangkok. And even though the somewhat decrepit Royal University of Fine Arts which produces most of the country's art graduates, is slated to be moved across the Mekong despite the objections of many students, the school at least houses one token concession to Western techniques -- the single lithography press donated over six years ago by printmakers in Oaxaca, Mexico, as an act of artistic solidarity.

Among the Cambodians to utilize the Char Workshop, headed by Mexican Fernando Aceves Humana, is Kong Vollak, a draftsman in black-and-white who says his fantastical skyscrapers are meant "to correct the mistakes being made by city planners." Also utilizing the press is Sopheap Pich, the country's Biennale choice and most internationally known sculptor. A diaspora returnee raised in the U.S., he has better marketed his sculptures, made largely with bamboo, than some of his peers. 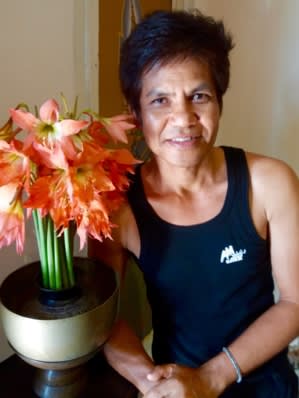 Artist Leang Seckon in his studio (Photo by John Krich)

Other rising luminaries include Sopeal Neak, a graphic designer turned feminist photographer of women posed with household implements; Dina Chhan, a painter of Cambodian wildlife; and Marine Ky, a returnee from France, who works with symbolic visual patterns as part of a larger initiative towards peace and reconciliation.

Svay Sareth, who is building his own home on the outskirts of Siem Reap, may have the most remarkable story. After an entire childhood in a camp in Thailand, his love of drawing took him to help found F.A.R., an academy built from scratch in the rice fields around Battambang. "We were paid no salary and had never taught, but could draw for hours without eating," he said. With the school now past its "Seventh Generation," one of its graduates is his wife Yim Maline, a spinner of elaborately surreal drawings, who likens Cambodia today to a "piece of burnt charcoal." Having abandoned sketching for conceptual work, Sareth has walked around the country hauling a large, rolling "ball and chain," publically eaten rubber sandals and reproduced famed Angkor bas-reliefs swathed in modern military camouflage.

Painter Leang Seckon, too, was directly impacted by the Vietnam War. Because he was inside his mother's womb when American bombs began falling on his village, and she protected him under traditional garb, he later exhibited at Columbia University an installation in the form of an enormous skirt (also referencing a parachute). More positive now, he portrays the smiling face of a statue returned to its Cambodian "home" from a British museum -- but it is still severed from its body, and surrounded by Chinese lanterns and Western symbols like Santa Claus. "I must have freedom as an artist," he proclaimed. "But that doesn't mean I want to see anyone hurt."

Khvay Samnang, the militant "Sand Man," has intervened against the building of dams and pondered prior French colonialism as a "Rubber Man," pouring tree sap over his head. He has even covered himself in pasted headlines as a "Newspaper Man" to protest lack of coverage of environmental destruction. He says he "paints without brushes" and "just can't control his passion."

Will his generation persevere against potential censorship and ridicule until there are enough local collectors and overseas connections to create a permanent space for safe expression? Artists everywhere know about the art of survival, but that is especially true in a land which has suffered so much. As one of Cambodia's "rebels" quipped, asking for anonymity: "For sure the government will come to us someday. But we don't know if they'll kill us or give us 10 million dollars."

Brian Curtin contributed to this article.