Posters for popular Malaysian films, from left, "Sheep without a Shepherd," "On Your Mark" and "Barbarian Invasion." These films are among the growing number of productions by Chinese Malaysian directors that are finding an enthusiastic audience in China. (Nikkei montage/photos courtesy of Da Huang Pictures and Astro Shaw)
MARCO FERRARESE, Contributing writerAugust 20, 2021 09:00 JST | Malaysia
CopyCopied

KUALA LUMPUR -- Breaking down in tears, frustrated mother Moon Lee pulls her naughty child across a desolate bus station in rural East Malaysia. Alone and broke, she has no choice but to travel with her little boy to conservative Terengganu, where her longtime director friend Roger Woo wants her back on set -- something she was forced to put on hold since falling pregnant.

With its exotic photography and offbeat Malaysian setting, the opening scene of the Malaysian film "Barbarian Invasion" (2021), by Tan Chui Mui, captured a full house at the 15th FIRST film festival in Xining, the capital of remote Qinghai Province in western China, where it opened on July 25.

Produced in Malaysia during the country's first COVID-19 lockdown in 2020, Tan's third film tells the story of actress Moon Lee, played by the director, who must undertake punishing martial arts training for her comeback role in an action film. Produced, written and acted by some leading lights of Malaysia's "New Wave" cinema of the mid-2000s, "Barbarian Invasion" is a subtle ode to the resilience of independent moviemaking as a metaphor for life. The film is earning big accolades in China, where it won a top prize at the Golden Goblet Awards, part of the Shanghai Film Festival, on June 20.

Tan's film was awarded the Jury Grand Prix, the festival's second-most coveted prize, for its pitch-perfect pace "as it continues to subvert and surprise at each turn."

The film's success marks another triumph for Southeast Asian cinema in China, hot on the heels of the box-office sweep of another Chinese Malaysian director, Chiu Keng Guan, who notched up a major hit in June when his sport-themed drama "On Your Mark," produced in China, debuted in the mainland. 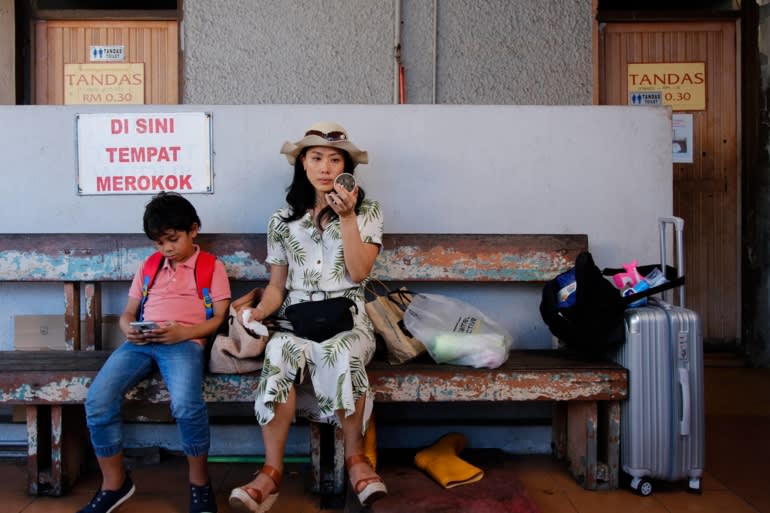 Released as "Liao Bu Qi de Lao Ba" in 9,000 Chinese theaters on June 18, the film collected 13.65 million yuan ($2.1 million) on its opening day. With gross income of 37 million yuan in its first two days, the film quickly established itself as the No. 1 title in China.

Featuring the acclaimed Chinese actors Yanhui Wang, Youhao Zhang and Beibi Gong, "On your Mark" tells the uplifting story of a father who helps his son -- afflicted with multiple sclerosis, inherited from his late mother -- run a marathon. Chiu, who said he was surprised by the film's success, was named director of "On Your Mark" in 2016 after his fourth film, "Ola Bola" (2016), was screened at the Shanghai Film Festival.

"Ola Bola" told the story of how the Malaysian national soccer team qualified for Moscow's 1980 Summer Olympics. It was a blockbuster in Malaysia, much like Chiu's romantic comedy "The Journey" (2014), which grossed 16.87 million ringgit ($3.9 million), becoming the 10th highest-grossing Malaysian film of all time. "A producer came to me with this story right after [the screening of 'Ola Bola']," Chiu told Nikkei Asia. "I was really moved by it and decided to take part in the [project], and that's basically how everything started." "On Your Mark" is Chiu's first film directed outside Malaysia.

Chiu's and Tan's successes mark the two latest international achievements for Chinese Malaysian directors, who are increasingly turning to China's larger market to realize the full potential of their Mandarin-language films, which do not always appeal to multiethnic Malaysia's Malay-speaking majority because of their differences in language, Chinese Malaysian characters and settings, and culture.

"Chinese Malaysian directors are looking at China as a promising market because this Mandarin-speaking country offers the largest audience for their films," said Teo Miaw Lee, a lecturer in film at Universiti Malaysia Sarawak, adding that Chinese Malaysian people share a similar culture and language with mainland China.

The release of Malaysian director Sam Quah's gripping thriller "Sheep Without a Shepherd," which debuted in China in December 2019, was the first example of how well-received Chinese Malaysian films can be in China. 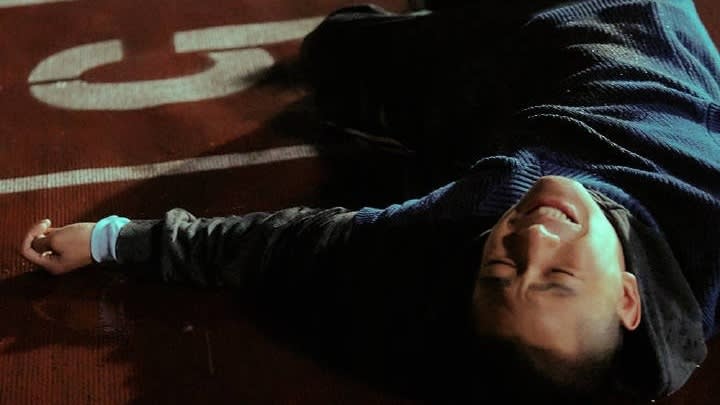 Top: Popular Chinese actress Beibi Gong plays a strict coach in Chiu's "On Your Mark." Bottom: In the film, Youhao Zhang plays a teenager who fights tooth and nail to run a marathon despite having multiple sclerosis. (Courtesy of Astro Shaw)

Set in northern Thailand, "Sheep Without a Shepherd" -- a remake of the highly praised Indian film "Dryshiam" (2013) by Jeethu Joseph, about a cinema geek who copies the plot twists from his favorite movies to create his family's alibi when they are indicted on charges in relation to the disappearance of an police chief's only son -- quickly became China's ninth highest-grossing film of the year, earning $190 million and bagging two awards at China's 11th Youth Film Handbook, including Best Commercial Film of the Year.

"Local producers and creative talents in both Malaysia and China are very similar in terms of their passion for producing good films," said Chiu. "But as the market in China is huge and mature, the production teams there are obviously bigger, with crews of more than 200 people, and each team member focuses on a specific role ... to help execute the production very smoothly." A still from "Barbarian Invasion." (Courtesy of Da Huang Pictures)

"We wanted the film to have the largest audience possible, so while we begin our [screening] journey in China, we hope the film will play in other parts of the world, like in Europe and North America," said Woo Ming Jin, a Kuala Lumpur-based director who produced "Barbarian Invasion."

"We do intend to have a release in Malaysia and Southeast Asia. While the market here is smaller, a film can be universal and transcend language, so we're hoping that it will find a broad audience," he said.

Thomas Barker, head of the School of Media, Languages and Cultures at the University of Nottingham Malaysia, near Kuala Lumpur, notes that by tapping into China, Chinese Malaysian filmmakers move from a home market of 30 million people, segmented by language, to a single-language market of more than 1 billion people.

"Malaysians like Chiu often struggle at home to get decent budgets and support," said Barker. "Same with [Malaysia-born director] Ho Wi Ding -- trained in the U.S., not much luck in Singapore or Malaysia, went to Taiwan and now lives in China full time. His budgets, scale, projects are bigger and more ambitious, and he can earn more money," said Barker. 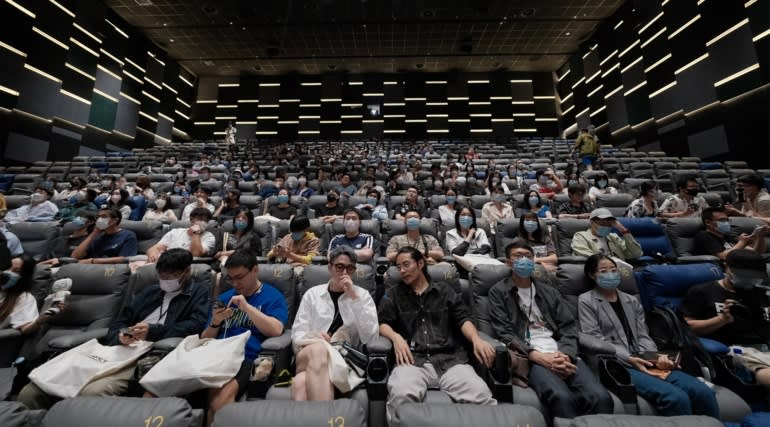 "Barbarian Invasion" opened to a full house at the 15th edition of the FIRST International Film Festival, in Xining, China. (Courtesy of Da Huang Pictures)

Also promising for Malaysian filmmakers is the openness in China's growing film industry toward outsourcing filmmaking to foreigners, noted Mary J. Ainslie, associate professor at the School of International Communications at the University of Nottingham's Ningbo Campus, in China. "[Chinese Malaysian] filmmakers, in particular, are highly mobile, international, cosmopolitan, and in contrast to other parts of the Chinese diaspora are far less hostile towards mainland China," she added.

Southeast Asia is also a major destination for Chinese tourism and investment. This close relationship makes stories and individuals from the region familiar to middle-class Chinese, whose consumerist lifestyle has boosted the spread of film theaters, especially in shopping malls. "In the COVID-era, Chinese cinema audiences have increased while cinemas struggle in the rest of the world," said Ainslie.

But a key reason behind the success of Chinese Malaysian films in China is the universality of their stories.

"Just how 'Malaysian' [are] these blockbusters when the protagonists are well-known East Asian film stars and the stories are universal enough to be set anywhere or adapted into any cultural context, as in the case of 'Sheep Without a Shepherd,'" said Khoo Gaik Cheng, associate professor of film and television studies at the University of Nottingham Malaysia.

"If there's one thing [that is] common among all three films, I would say it shows that Malaysian filmmakers just want to tell stories, and they may not necessarily have to be Malaysian in content," Khoo said.