Four of the Chinese survivors of the Titanic sinking, who were identified by new documentary, "The Six." (Courtesy of “The Six”/LostPensivos Films)
RON GLUCKMAN, Contributing writerJuly 1, 2021 09:25 JST | China
CopyCopied

BANGKOK -- China is famous for historical riddles spanning the ages. Even so, nothing prepared American writer Steven Schwankert for his trek across continents to solve the century-old mystery surrounding six Chinese survivors of the Titanic sinking.

Every reporter's dream is to unearth an important untold story. Yet it can be a monumental task, following a trail of elusive fact-crumbs to the truth. "It's like a jigsaw puzzle," said Schwankert, "except instead of the pieces on the table in your living room, they are spread out across the world."

Schwankert's investigation, pursued together with British filmmaker and longtime Shanghai resident Arthur Jones, resulted in "The Six," a feature-length documentary released in China in April, playing on 40,000 screens in 11,000 theaters.

James Cameron, who wrote and directed the blockbuster "Titanic" (1997), is executive producer of "The Six," made by Shanghai-based LostPensivos Films, where Jones is a director. The film will soon be released internationally -- Jones confirmed that it will be part of the Melbourne Documentary Festival and the Vancouver international Film Festival later this year.

Perhaps the most amazing thing about "The Six" is that even in China, few people knew that there were eight Chinese passengers on board the ill-fated Titanic, which sank on April 15, 1912, after colliding with an iceberg in the North Atlantic on its maiden voyage from Southampton, England, to New York City. More than 1,500 of the estimated 2,240 passengers and crew lost their lives. 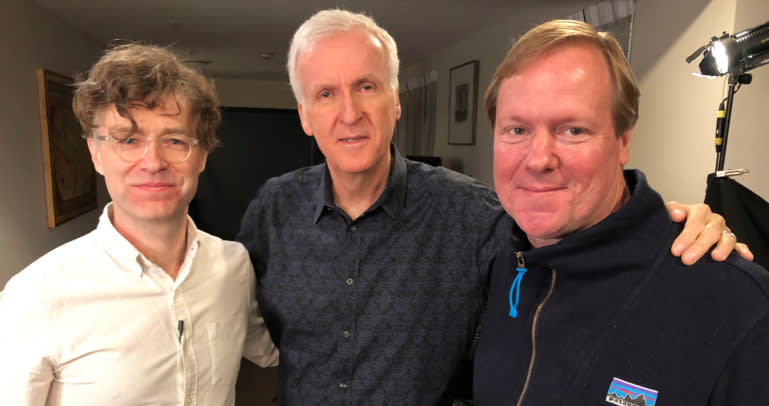 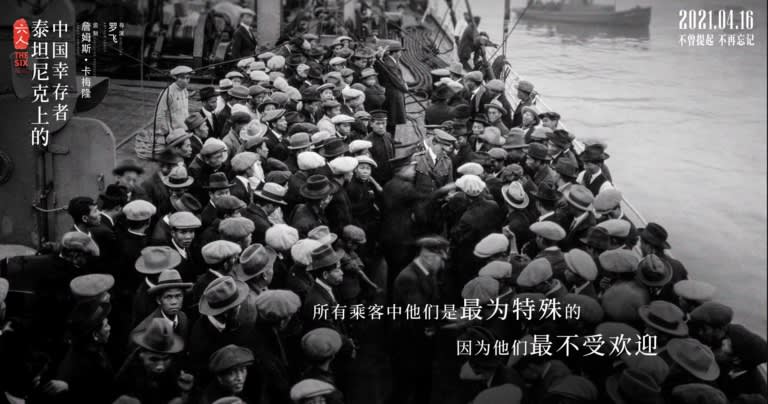 Top: James Cameron, who made the blockbuster Titanic film, center, with "The Six" team of Arthur Jones, left, and Steven Schwankert. Bottom: People on the dock, awaiting the Titanic. (Courtesy of “The Six”/LostPensivos Films)

Seafaring stories are a passion for Schwankert, 50, who has spent 25 years in Beijing as a writer and editor. He is also a scuba enthusiast who pioneered dives in China and Taiwan, and wrote a book about HMS Poseidon, a British submarine that sank after a collision off China's northeast coast in 1931. The boat was thought to lie at the bottom of the Bohai Sea, but had in fact been salvaged covertly by China in 1972, when the People's Republic had scant contact with the outside world. The poster for "The Six." (Courtesy of “The Six”/ LostPensivos Films)

That story became "The Poseidon Project," a 2013 documentary directed by Jones, 47, who also moved to China in 1996. He initially worked for magazines, but later moved into filmmaking, working on documentaries for Discovery Channel and the BBC.

Over the years, Schwankert said, he heard about Chinese passengers on the Titanic, but details were sketchy. He proposed it to Jones as a project in 2014. "Arthur can tell you his reaction," he said in a Zoom call with both filmmakers in China. "I wasn't immediately drawn to it," Jones admitted.

"We [had] just spent five years working on a maritime history film, and it's not my area. So I was kind of looking for something a bit different. And it felt a little bit like, 'Titanic? Is there a really another film in there?'" Yet, when Jones talked with Chinese friends, they were astonished by the untold tale. "I eventually was persuaded just by sheer force of enthusiasm, both on the part of Steven, but also of random people in China." 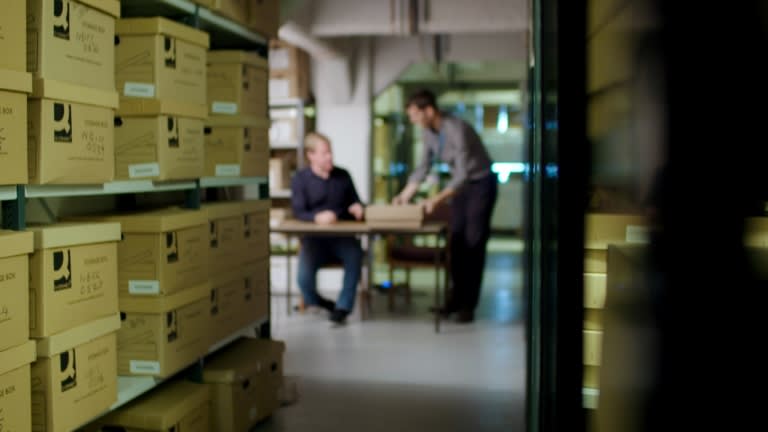 Schwankert, seated, goes over maritime records in the Bristol Archives in the U.K. (Courtesy of “The Six”/ LostPensivos Films)

That these survivors, and their miraculous rescue, were lost in history is due in part to anti-Chinese racism at the time, a theme of "The Six" that is highly topical in the light of COVID-19-related anti-Asian sentiment in the U.S.

Jones scripted the search as a slowly unraveling mystery within the historic tale. And what a mystery it proved to be. The film follows Schwankert and his research team on a global hunt to identify the elusive men. There were 700 survivors of the sinking, remembered in news accounts, books, diaries and films. Yet records yielded almost nothing about the Chinese passengers. Even family members, shown in "The Six," did not know their relatives had been on board the Titanic. The passenger list for the Titanic shows the eight Chinese passengers; six of them survived. (Courtesy of “The Six”/ LostPensivos Films)

One was rescued from atop a floating piece of wood, which inspired the ending to Cameron's "Titanic," although he placed the lead actress Kate Winslet on the wood. But Cameron did shoot a scene in which a lifeboat finds a Chinese man clinging to a piece of wood, amid a sea filled with corpses. The scene, cut by Cameron in his final edit, reappears dramatically in "The Six."

Unraveling the mystery started with the identity of the men. "The Six" establishes that the names listed in the ship's records -- the key clue to tracking them down -- were false. Many Chinese at the time traveled as "paper sons," posing as relatives of previous immigrants to the U.S. to evade the 1882 Exclusion Act, which barred most Chinese from entry.

This was a devastating blow, but the team established that the Chinese appeared to be seamen, heading to maritime jobs in Cuba. Identifying them proved a monumental task, but Schwankert was resolute. "I don't like phrases like 'lost to history.' I don't accept that," he said.

In the documentary, the search for the seamen becomes a classic detective story, as a whiteboard fills with photos and news clippings. Researchers doggedly track Chinese with similar names or work details. Then, they locate Tom Fong, owner of a Chinese restaurant in the U.S. state of Wisconsin. His father was Wing Sun Fong, a former seaman who mentioned surviving a shipwreck, but never shared much detail. Matching photographs and records of his travel, "The Six" establishes that he was Fang Lang. "I never knew he was on the Titanic," Fong says in amazement. Tom Fong, whose father had mentioned a shipwreck but never that he had survived the sinking of the Titanic. (Courtesy of “The Six”/ LostPensivos Films)

In southern China, Schwankert visits dusty villages that saw a surge of emigration to jobs in the U.S. in the late 19th century. Querying old-timers, he and his team find relatives of Fang, who produce a stack of letters he sent home. Schwankert can barely contain his glee. Then Fang's great-nephew recites from memory a poem Fang penned about the shipwreck.

Other advances are less dramatic. Newspapers at the time of the disaster said that Chinese passengers had survived by hiding under the seats of lifeboats, or donning women's dresses. They were branded as cowards for taking the places of women and children. Tackling these accusations, "The Six" builds a lifeboat to scale, showing that it would be impossible to hide underfoot. Historians note that people unfamiliar with traditional Chinese robes may have mistaken them for women's dresses.

What becomes clear long before the Chinese are identified is how racism shaped the narrative of their rescue, and robbed them of a rightful place in the Titanic tale. "It's as if they were erased from history," said Schwankert.

The final indignity occurred when the RMS Carpathia, which responded to the Titanic's distress messages and rescued survivors, arrived in New York. Crowds packed the dock, giving the survivors a heroes' welcome. But the six Chinese were kept on board. Even after their ordeal, the Exclusion Act denied them entry. The next day, according to the documentary, they were transferred to another vessel and transported to Cuba, where they disappeared. Top: A view of Taishan, southern China, where some of the Chinese passengers on the Titanic came from. Bottom: Schwankert with the reconstructed lifeboat from the Titanic. (Courtesy of “The Six”/ LostPensivos Films)

"The racism that accompanied the Exclusion Act was shockingly virulent," said Cathryn Clayton, a professor at the Department of Asian Studies at the University of Hawaii. She noted a long pattern in the U.S. of portraying Chinese as untrustworthy, inscrutable and threatening. "The underlying racism has never really gone away," she added. "Unfortunately, this is still the case today."

Considering that anti-Chinese racism is such a hot topic "The Six" might have been expected to click with audiences in China. It received enthusiastic notices in mainland social media -- a clip that Jones released at the start of the project attracted 22 million views. Yet the film took less than $1 million at the box office in China.

"I was surprised that it didn't do better at the box office, considering the very positive reviews on social media it received," said Stanley Rosen, a professor of political science at the University of Southern California, who specializes in China. 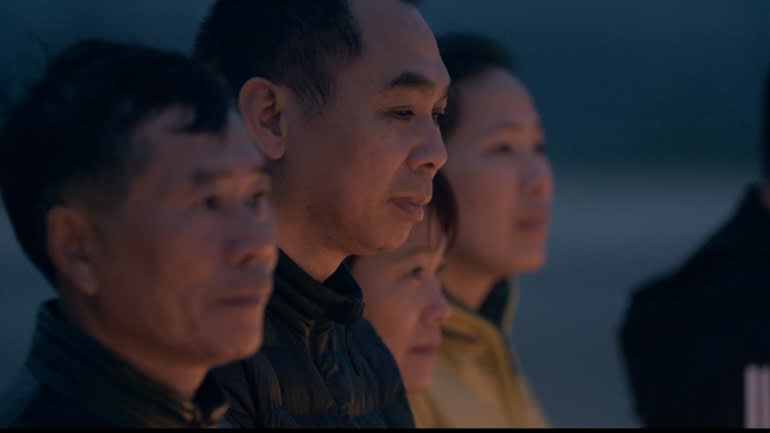 Chinese gather to remember the little-known Chinese passengers on the Titanic. (Courtesy of “The Six”/ LostPensivos Films)

However, said Rosen, the film may simply have appeared at an inopportune moment in Chinese history. "This is a reminder of the time of a weak China," he said, adding that Chinese now are not interested in historic tales about poor laborers, or the "sick man of Asia." Chinese hate to hear that," he said. "This is nothing to celebrate."

Patriotic films and action movies showing China's global prowess are much more popular. "Wolf Warrior 2," (2015) the top-grossing Chinese film with box office receipts of more than $890 million, follows a special operations fighter who prevails against foes around the world.

China also has relatively few art cinemas or film festivals -- a likely destination for "The Six" in the West. Nevertheless, Schwankert and Jones have cast light on a perplexing mystery, giving long overdue credit to a tale of fortitude and survival.