Korakrit Arunanondchai's contribution to the Venice Biennale touches the spirit 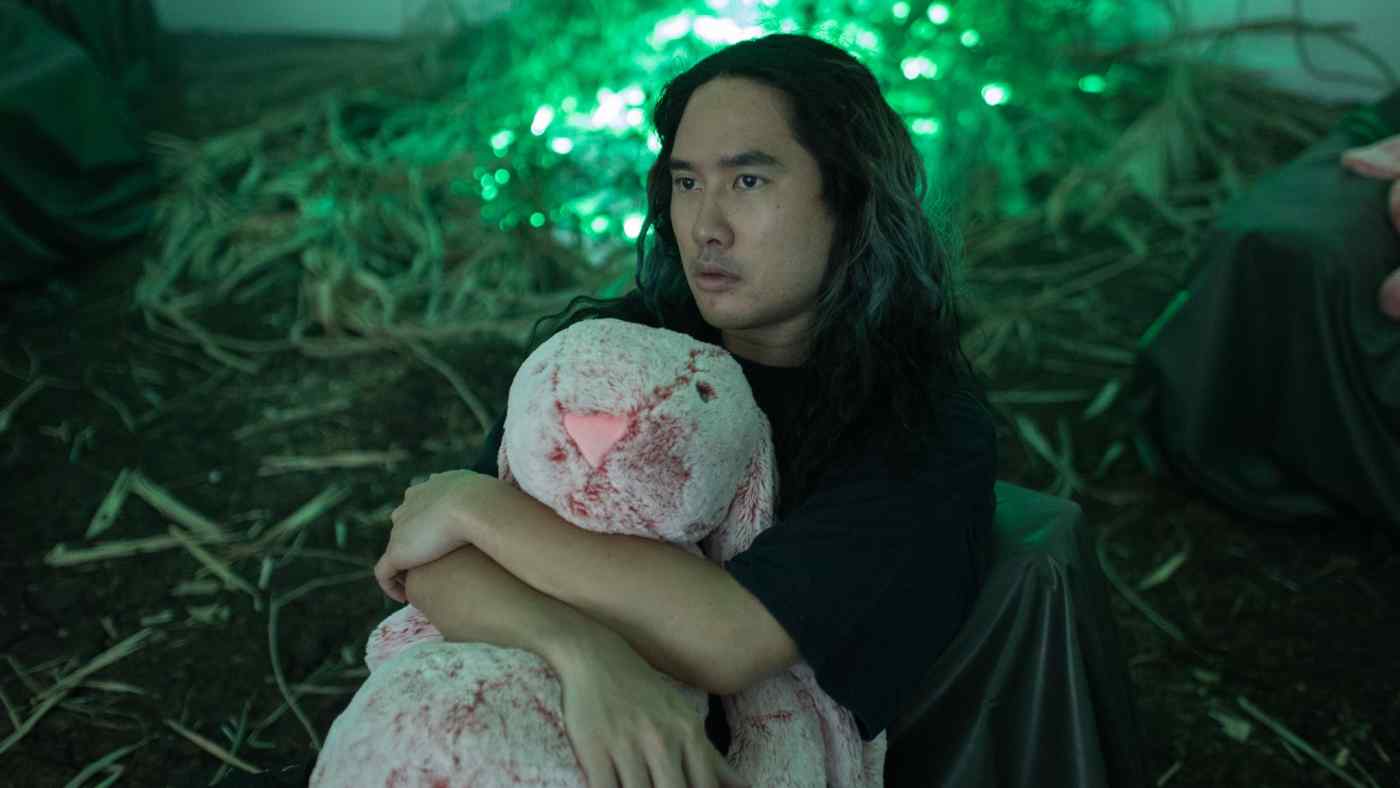 Artist Korakrit Arunanondchai does not lack the power of invention. If anything, the Thai-born and New York-based 33-year-old may possess too much.

His latest work -- a video-and-sculpture installation on show in the main exhibition at the Venice Biennale, which opened in the Italian city on May 11 -- is a case in point.

Ensconced in a techno-organic landscape created with the help of regular collaborator Alex Gvojic, its three giant screens reveal a swollen ensemble of characters, among them a band of white-clothed acolytes, a veterinarian, the artist's frail grandparents and a bare-breasted avatar of the naga, the river-dwelling dragon of Southeast Asian folklore, played by the gender-fluid American performance artist boychild. The tense, writhing gestures of performance artist boychild feature centrally in "No history in a room filled with people with funny names 5". (Photo by Napat Pattrayanond)

Pitched somewhere between pessimism and redemption, it is a semiotic whirlwind of a work that owes its unchecked vitality and nebulous swarm of imagery and ideas to Korakrit's interest in deconstructing modern myth-making, and finds him spinning a few tales of his own. "'No history' is about the formation of stories through obscurity, about how unrecorded histories become myth and realities are layers of storytelling," he told the Nikkei Asian Review at the Thailand debut of the work at Bangkok CityCity Gallery. A mud-caked Arunanondchai in a scene from "No history in a room filled with people with funny names 5". (Courtesy of Bangkok CityCity Gallery)

A fast-talker with an infectious energy and flowing locks, Korakrit is that rare thing -- an artist of Thai descent with global reach. Since graduating in the U.S., from Rhode Island School of Design and Columbia University, his career has taken off in a way that most of his Thailand-based peers can only dream of. During his studies he soaked up critical theory and art history and was mentored by fellow Thai Rirkrit Tiravanija, a pioneer of relational aesthetics, a form of audience-focused art that artists facilitate rather than make. It is a close relationship that continues until today. "I see him all the time and we talk about my work, but I also have that relationship with lots of people," Korakrit said.

His breakout show, at New York's MoMA PS1 in 2014, came about after a recommendation from one of the most powerful figures in the art world, curator Hans-Ulrich Obrist. Other solo exhibitions followed at the Palais de Tokyo in Paris and Beijing's UCCA, among other art institutions. In each he has paired objects with video and performance and gestured at topics such as the fabricated artist-persona and the canon of Western painting. Informed by his upbringing, his art-making is an evolving synthesis of scattershot influences: rap music, Buddhist mythology, arcane rituals, postmodern theory, avant-garde film, personal memories, painterly abandon. And then there is denim: This universal material -- in his eyes, a metaphor for the spread and appropriation of Western culture -- consistently features in both his wardrobe and his art practice.

In past interviews Korakrit has railed against the binaries of East and West, yet he readily admits that his navigation, both physical and spiritual, of different cultures lends his work its frisson. He moved to the U.S. more than a decade ago and has a studio in New York's Queens area, but finds himself drawn back to Thailand. "When I spend time here it feels meaningful," he said. "My parents are here; I do a lot of research here. I like to think I also live here as well. But I also think that sometimes you can learn from a place by not being there."

A dreamlike attempt to dramatize the ordering power of words, and the spiritual bonds that bind us amid today's cacophony of data, uncertainty and resurgent nationalism, "No history" reveals his knack for pouncing on current events and elements of high and low culture, often from within Thailand. Much of it was shot in northeast Thailand's Udon Thani province, a "myth-making area" that he and Gvojic explored last year. 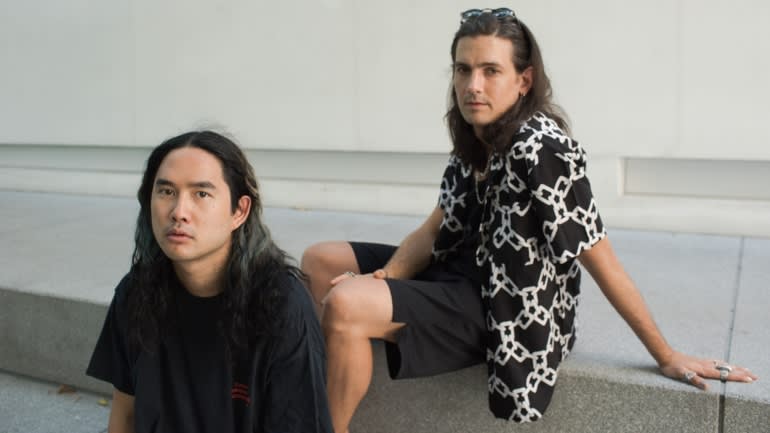 "We were trying to find naga portals and CIA director Gina Haspel's secret black site," he said. They were also searching for the source of a hoary story about an outdoor cinema company that once staged a film for a white-clothed audience who, local folklore has it, all fell asleep. "They woke up in the morning in the middle of this field and everyone was gone," he said. "And all the money collected had turned to leaves."

A central motif is that of the caregiver and care receiver, signposted by images of Korakrit's dementia-suffering grandmother, a Thai soldier, and forest dwellers clutching cuddly toy rabbits. Furrowing similar terrain is a slice of syrupy propaganda that Korakrit found: an official government news segment about the 2018 Tham Luang cave rescue -- a major international news story -- set to the Whitney Houston ballad "When you Believe."

Over its 31-minute duration, the film circles back to this incident in Thailand's Chiang Rai province and tells us, at one point, "The ghost has the power to grant citizenship," a reference to the stateless boys and soccer coach who were granted Thai passports by a regime eager to cast itself as a benevolent force. "I was drawn to the cave episode because there was this sudden confluence of different power structures, realities, caregivers and even, I'd say, storytellers who make up different aspects of life here," Korakrit said. "Plus, it happened near this border area where the question of who is Thai, and what Thai-ness is, is going on. It was this big myth-making moment when narratives were eating each other." The earnest lyricism and sudden shifts of register typical of Korakrit's art can divide people. However, while reactions vary -- some write his work off as pretentious bunkum, others believe it reflects the heat of our times -- there can be no denying his international success, nor his cachet on home turf. Korakrit Arunanondchai, center, in conversation at the opening of "No history in a room filled with people with funny names 5." (Photo by Napat Pattrayanond)

At "No history's" Thailand debut, a crowd of hundreds -- a rare sight in Bangkok's art scene -- lapped up his artist-philosopher-performer persona. A packed room listened to him opine about his work as a white, life-size Korakrit mannequin glowed next to him. Then, after marveling at the show's mythmaking moving images, flaming denim paintings and faux-forest floor occupied by old sofas and a mound of green-glowing foliage, the crowd headed outside to hear him sing. It was less a traditional exhibition opening than a reminder of his mercurial talents. 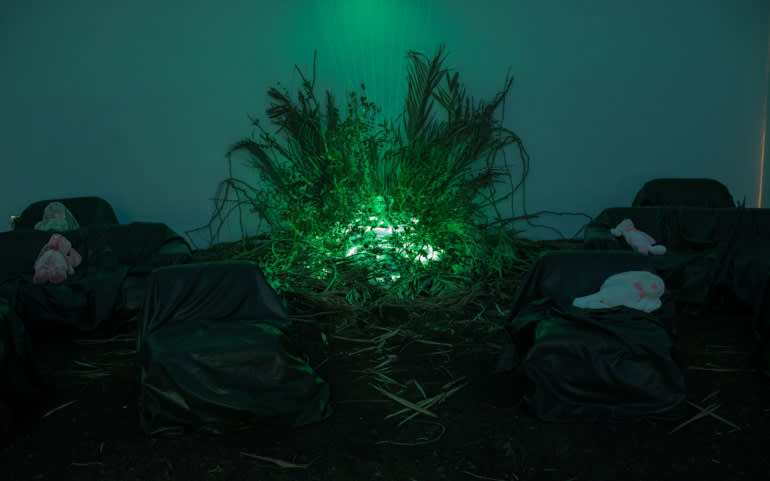 In contrast, "Ghost: 2561," a new video and performance art triennale he launched and curated in Bangkok last year, was less about him and more about finding a new outlet for the collaborations and dialogues so central to his idiosyncratic practice. "I was trying to introduce art through the framework of animism, which is something people in Thailand feel accustomed to," he said.

The triennale featured the work of many of his peers, such as German-Japanese artist Hito Steyerl and Thai Palme d'Or winner Apichatpong Weerasethakul (both also participants in the Biennale, Venice's 58th International Art Exhibition), but he is proudest of the festival's "storytellers" -- a group of Thai guides who served as mediums for the art.

"I wanted to challenge the white box and wall text [traditional in museums and galleries] as being the best way to represent an idea. We're going to continue working with them; the ones who want to at least," he said, referring to the Ghost Foundation he and his co-organizers have started, which looks set to further deepen his connection to his homeland. "They were the best thing to come out of it for me." If Korakrit sometimes gives the impression that he is cultivating a polymathic artist persona, his plans for the near future -- a musical about the naga for a performance art biennial in New York -- appear to confirm it. "It's going to take a lot of what this video does, but things are going to happen in the domain of live space with real bodies," he said. "However, I still want it to relate to the screen and this idea of the ghost cinema."