Kolkata's expert artisans give life to the most beloved legend A Kumar takes a break from relentless work in front of the clay goddesses he just finished sculpting. When completed, the figures are taken out of the sweatshops and exposed in the sun to dry. (Photo by Kit Yeng Chan)
MARCO FERRARESE, Contributing writerSeptember 28, 2017 10:31 JST | India
CopyCopied

KOLKATA -- In a cramped, humid and dimly lit sweatshop, a row of giant women, each with 10 arms lie in wait. The bare walls are so narrow that their limbs lock into each other, shining under a solitary naked light bulb swinging overhead.

A man wrapped in a checkered sarong stands before them. Using a wooden tool, he smears clay over their bodies, carefully leveling the raw material to form hips and stomachs. It is the beginning of September, and the man's tired face shows the signs of days spent working around the clock. "The puja is coming up soon, and the orders never stop," he says. "We are at the busiest time of the year." Assorted idols sit outside to dry on the streets of Kumartuli. (Photo by Kit Yeng Chan)

This is the world of the kumars, the famed potters of the district of Kumartuli ("place of the potters"). It sits in Kolkata's most industrious and mysterious quarter of artisans, in close proximity to the Bagbazaghat, on the eastern shore of the Ganges river. The kumars spend their days in these hole-in-the-wall sweatshops, moulding and smattering wet clay into the sacred idols that will enliven the stages of the Durga Puja, West Bengal's most important religious festival, set to run from Sept. 26-30 this year.

The Durga Puja commemorates the victory of the goddesses over the buffalo-demon Mahisashur. For five days, Bengalis put up a great show of devotion, parading thousands of colorful hand-made clay goddesses on the streets of Kolkata. The Durga Puja starts on the day of Mahalaya, when thousands come to the banks of the Ganges -- known locally as the Hooghly -- to pray to their ancestors, in a ritual called tarpan. Afterwards, the devotees inaugurate the idols, continuing their prayers for the next three days. Finally, the clay statues are returned to the Hooghly: thousands of idols float in the river, melting and falling to shreds as they drift towards the open waters of the Bay of Bengal. A Kumartuli potter takes a nap on the floor of his workshop, surrounded by his craft. (Photo by Kit Yeng Chan)

The narrow alleys of Kumartuli have been producing the idols for centuries: the first potters arrived in Kolkata about 300 years ago from the nearby town of Krishnanagar, in Bengal's Nadia district. They found their haven next to the river, and its never-ending source of mud -- the base ingredient potters need to produce clay.

In the past, the early kumars worked from the homes of the zamindars, a caste of Bengali aristocrats, building the idols in areas reserved for religious festivals. During Bengal's partition in 1905, Kumartuli received waves of skilled migrant workers from Dhaka, Birkampur and Faridpur, in modern day Bangladesh. Gradually, the production of idols moved out of the zamindars' aristocratic enclosures, finding a permanent home in the busy streets of Kumartuli.

The Durga Puja's idols are the products of a long and intensive artisanal process. It all starts by mixing soil-like gangamati, the mud that the kumars collect from the banks of the Ganges, with the path mati -- a mix of jute and gangamati. At the beginning, the kumars create a light bamboo structure to support the idol, and bind bundles of straw together to create the statues' limbs and torsos. The expert artisans mold the wet clay on the frame with their bare hands, brushes and the chiyari -- a rectangular bamboo sculpting tool, similar to a comb with no teeth.

The fingers, feet and heads of the idols are built last: these parts are made entirely of soft clay, pressed with models into the desired shapes. Along with the area’s thriving potting community, Kumartuli is a lively district where other artisans ply their trades directly on the street. (Photo by Kit Yeng Chan)

The kumars place the freshly made idols to dry in the sun for several days, giving Kumartuli's streets the odd look of a furnace of giant grey statues. Direct sunlight bakes the clay, which softens its color and makes it easier for the kumars to apply the basic skin tone. As a last step, they paint the idols' facial features with great care. Only the oldest kumar in a potter's family can draw Durga's lotus-shaped eyes, in a ritual known as chokhhu daan ("gifting of eyes").

Once dry, the clay Durgas are dressed with beautiful sarees, their 10 arms decorated with abundant ornaments and faux jewelry -- a real ancillary industry carried out by other Kumartuli residents, who specialized in producing such clothes and accessories. The newborn idols are then ready to transition from Kumartuli's sweatshops to Kolkata's pandals, where they will soak up the city's love and prayers for the following five days.

For centuries, Kumartuli was an exclusively male colony, and the Durga idols were produced under common rules dictated by traditional styles. But in recent years, things have changed quickly. One example awaits behind a street corner, where two young men work on several bright-colored idols whose features break with the traditional Durgas on sale in most of the surrounding sweatshops. 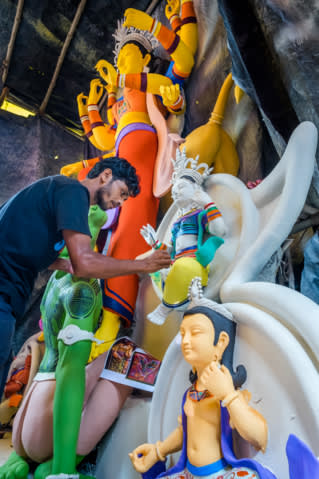 Ushnish, a 22-year-old art student, drapes an arabesque decoration over his modern-day version of a Durga figurine. (Photo by Kit Yeng Chan)

"There are also many young artists like us in Kumartuli today," says Ushnish, a 22-year-old student from Kolkata Government Art College. "I am helping Naba Kumar Pal, a local artist, prepare his effigies for the Durga Puja's annual contest," he explains. His master, Kolkata-based artist Kumar Pal, learned the basic techniques from the potters, and now teaches young arts students how to blend traditional styles with modern ideas.

"We use different colors, sizes and shapes to upgrade the look of the idols. And if they are striking enough, we expose them at the beauty contests held during the puja celebrations," explains Ushnish, before returning to drape a silver arabesque pattern over Durga's left thigh.

Besides the involvement of a new generation of younger artists, Kumartuli's rigid gender roles are also shifting. Women have earned a small yet important space in the male-dominated world of the Pals -- the caste to which most kumars belong -- which, despite Goddess Durga being a woman herself, never welcomed females into their circle. In the recent past, four Kumartuli women -- China, Mala, Lakshmi and her daughter Soma, all from the Pal caste -- have shown that women in Kumartuli can run successful idol-making businesses.

China's father Hemanta and Lakshmi's husband Haru never wanted daughter and wife to become potters; but Mala's father did not mind when she, aged 14, started following him to his sweatshop to observe how to mold small clay Goddesses. When he passed away in 1985, she took over his business, specializing in miniature Durga idols that are easy to pack and ship. She is now a successful entrepreneur who exports Durga figurines as far as Europe, Australia, Canada, and other countries which host the Bengali diaspora.

"Being a potter is a hard job: we have to respect tight delivery deadlines, given that pujas have certain fixed days each year," explains China, who learned the art from her father only a few weeks before he passed away. He had no choice but to teach her, because the rest of China's male siblings had refused to continue their father's craft. Mala Pal, one of Kumartuli's few female potters. Women like Mala Pal have become famous for producing miniature figurines, which are popular for their ease of export to the Bengali diaspora celebrating the Durga Puja elsewhere in the world. (Photo by Kit Yeng Chan)

In line with China's international dealings, modern-day Kumartuli are also popular with businessmen. The potter town supplies idols to about 100 countries worldwide, with new nations joining the list every year. People of Indian origin travel often to the potter's colony to choose the idols they want to import to their adoptive countries. Kolkata-based agencies also service the Bengali diaspora by acting as intermediaries between foreign buyers and the kumars. According to tourism authorities in West Bengal, about a million foreigners visit Kumartuli each year.

"It's a great reward for our efforts," says one potter, while taking a break from molding a fresh idol. He talks quietly, sucking smoke from his traditional Bengali cigar, looking with pride at the humid image of Durga he has just finished smattering with a fresh layer of clay.

"But this job is also very sad," he continues. "We know well that once the festival is over, the idols are thrown in the river, and all our hard work returns to mud."