Threatened building is a monument to Japan's Metabolist architecture TOKYO -- The apartments in the timeworn concrete building have no hot water or cooking stoves, and the windows cannot be opened to let in fresh air. Its structure is asbestos-ridden, threatened with demolition, and covered with a sad-looking net to protect pedestrians against falling debris.

Yet the Nakagin Capsule Tower on the southern fringe of Ginza, one of Tokyo's priciest neighborhoods, is beloved by architects, artists and many others who consider it a priceless monument to a brief but exciting chapter in Japan's architectural history.

Built in 1972 and designed by Kisho Kurokawa, a renowned Japanese architect, the tower is one of the few remaining testaments to Metabolism, a short-lived but globally influential architectural movement that originated in Japan. Faced with long-term neglect, falling occupancy, safety concerns and possible demolition by its owner, the building's fans are running a desperate campaign to try to save it.

"Although this building attracts attention for its unusual exterior and [its legacy], it is also a building that many people really enjoy living in, which cannot be rebuilt; that is why it needs to be preserved," said Tatsuyuki Maeda, founder of the Nakagin Capsule Tower Preservation and Restoration Project, who owns 15 apartments in the building.

The Metabolist movement was based on the idea that architecture should be able to grow, reproduce and transform in response to changes in the environment, like a living organism. There has always been some concern that one of the capsules would fall off, but this has never happened. (Courtesy of Shinichi Ito)

The idea grew out of concern that rapid economic growth and urbanization would deprive Japan's cities of land for building. In the five years to 1965 Tokyo's population increased by 3 million, forcing many city workers to commute long hours to their offices.

The Metabolists' solution was to build vertical megastructures to which prefabricated, replaceable units would be attached, keeping Tokyo compact and making it possible to renew buildings without tearing them down.

"I thought that architecture is not permanent art, something that is completed and fixed, but rather something that grows towards the future, is expanded upon, renovated and developed," Kurokawa wrote in his treatise, "From the Age of the Machine to the Age of Life."

While most of the Metabolists' designs were not realized, their ideas were widely influential and have continued to inspire architects throughout the world. "The Metabolist movement encouraged architects to believe in their ability to address social issues through their work," said Sandra Yoshihara McKee, a New York architect and fellow of the American Institute of Architects. 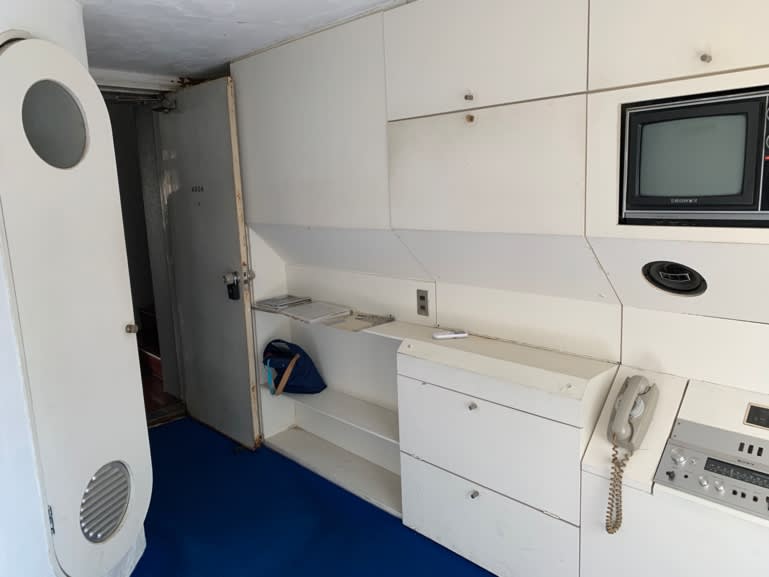 The storage units were pre-installed at the factory where the capsules were built. (Michiyo Nakamoto)

"In the West, buildings were traditionally expected to be rigid and permanent, but nowadays it is widely recognized that buildings can also be flexible and evolve with their surroundings. That is a legacy of the Metabolist movement," McKee said.

In a talk in Tokyo in 2011, renowned architect Rem Koolhaas, Professor in Practice of Architecture and Urban Design at Harvard University, credited Kurokawa with putting forward "many ideas that are very subtle in terms of how nature could be used or how architecture could be sustainable, ideas which are major issues in architecture now." The original interior, with its marine-blue carpet, resembles that of a ship cabin. (Michiyo Nakamoto)

Such aspirations were hardly a priority in 1970s Japan, when the country's overriding goal was economic expansion. Nevertheless, Kurokawa's vision struck a chord with Saizo Watanabe, chairman of Nakagin Mansion, a real estate developer, who commissioned a hotel-cum-apartment building in Ginza.

The result was the Nakagin Capsule Tower, one of Kurokawa's and Tokyo's most iconic buildings, and the template for the many capsule hotels that have since sprouted all over Japan.

The building is comprised of two interconnected concrete towers, to which 140 capsule apartments were individually connected by high-tension bolts so that they could be easily replaced as they aged, putting into practice the Metabolist idea that buildings should be renewable.

The capsules were prefabricated with their interior fixtures included, and were brought to Ginza on trailers. The size of the apartments, which measure just 2.5 meters by 4 meters, was determined by the maximum size that could be carried on the trailers. The built-in furniture was designed to accommodate state-of-the-art electronics. (Courtesy of Shinichi Ito)

Marketed as part-home, part-hotel room and part-office, the capsules would "provide a good living space and a secluded environment in which to select and evaluate business data," said a sales brochure published at the time.

The idea was to provide Tokyo office workers with long commutes with pieds-a-terre in the center of the city where they could relax as well as work away from the office.

Each apartment was equipped with a built-in furniture unit containing a desk, air conditioner and console. Owners could opt to install a telephone, a state-of-the art color television and other electronics, but no burners were allowed.

Management provided bed-making services, and there was a business center complete with "capsule ladies," who could provide secretarial services. The TV, phone and reel-to-reel tape deck can still be used. (Michiyo Nakamoto)

The lifestyle advocated by the Nakagin Capsule Tower developers clearly resonated with city workers -- the apartments sold out in six months, despite costing between 3.8 million yen and 4.8 million yen (then $12,540 to $15,840) at a time when monthly incomes averaged 138,500 yen, according to the Ministry of Health, Labor and Welfare.

While the futuristic apartments may have seemed the epitome of modern convenience, the Metabolists' advocacy of perpetual renewal in architecture is rooted in Japanese architectural tradition, in which buildings are often rebuilt from scratch.

For example, the main complex of the Grand Shrine of Ise, in Mie Prefecture -- Japan's most important Shinto shrine -- is completely rebuilt every 20 years. The practice stems from the Shinto belief that the laws of nature call for periodic renewal, and has been continued for over 1,300 years. This "unit bathroom," is factory-made of a single, continuous material -- fiber-reinforced plastic -- and is a common feature of many budget hotels in Japan. (Michiyo Nakamoto)

However, the Japanese design elements are overshadowed by the building's eye-catching exterior, which has made it a favorite location for superhero films. In "The Wolverine" (2013) it became a love hotel where Hugh Jackman's character, Logan, and his love interest, Mariko, hid from yakuza gangsters.

Today, the Nakagin Capsule Tower is a sad shadow of its formerly futuristic self. About 30 of the 140 apartments have been abandoned, some uninhabitable because of leaks and mildew.

Ironically, while the capsules may be replaceable, some of the common fixtures are not, for structural reasons. For example, water pipes are installed between the apartments in 30-cm spaces, so when one of the pipes burst in 2010 it could not be renewed, leaving residents without hot water.

Such inconveniences have not discouraged the building's devoted residents, who say the lack of space and ordinary facilities encourages communal camaraderie. "It's like living in a nagaya (traditional row house)" where people used to share things with each other, said Maeda. 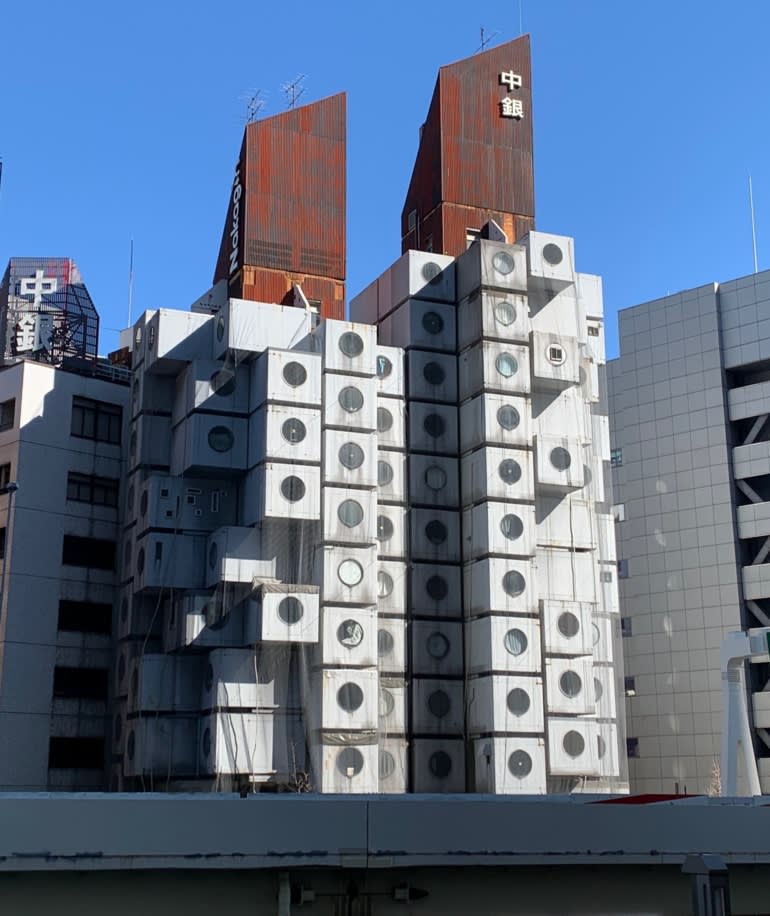 The Nakagin Capsule Tower is a Tokyo landmark in desperate need of renewal. (Michiyo Nakamoto)

Despite its charms, the Nakagin Capsule Tower faces a very uncertain future. "It is very difficult to preserve a historic building unless the surrounding community recognizes its cultural importance," said Yoshiyuki Yamana, a professor of architecture at Tokyo University of Science. "People have to recognize that the value of the building is more than its economic value as real estate."

There is some hope that the tower could be listed as a World Heritage Site, together with Daikanyama Hillside Terrace in Tokyo, designed by Fumihiko Maki, the Tokoen Hotel in Tottori Prefecture, designed by Kiyonori Kikutake, and other Metabolist buildings.

But the only way to save the building is to replace all the capsules, said Maeda. To do that, he is trying to raise funds from investors to buy both the land from CTB GK, which acquired the site in 2018, and the capsules that he and his supporters do not already own.

The cost will be high: Maeda expects each replaced capsule to cost several tens of millions of yen. With time running out, "it's 50-50 whether the building can be saved," he said.