From Cambodian rice fields to the big top 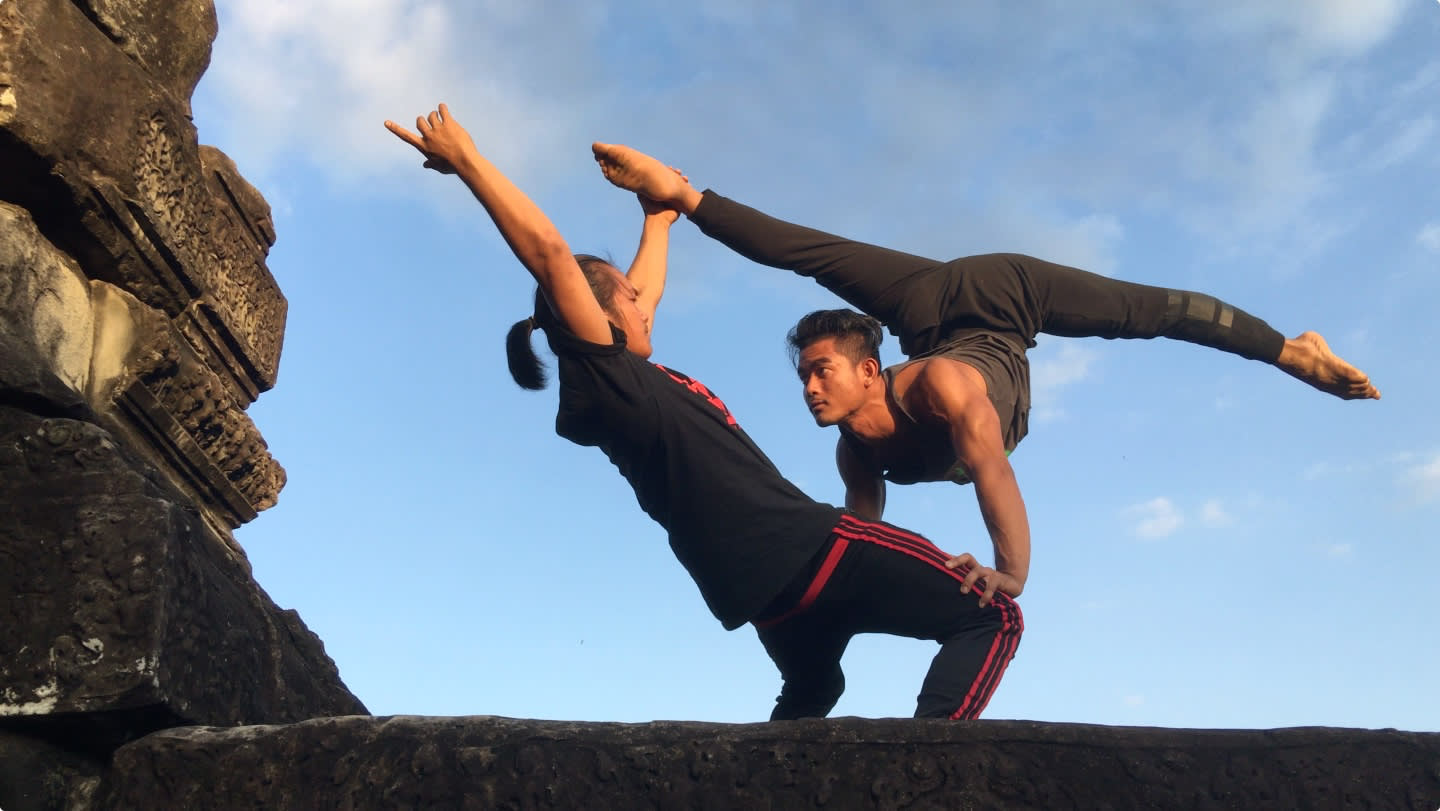 The film was part of the festival's regular program of online screenings and its special program presented with the Eastside College Preparatory School in East Palo Alto, California. Most of the school's students hail from minority neighborhoods and have aspirations similar to Sopha Nem and Dina Sok, the movie's two protagonists.

"One day at school [in Cambodia] they showed us a Cirque du Soleil video. "I was, like, 'WTF'! All my hairs stood on end. What kind of circus is this? How can I be part of it? I didn't know if I could make it because I am in Cambodia and I didn't even know where the circus is," Sopha Nem says in one of the documentary's most memorable excerpts.

UNAFF cannot provide precise viewer metrics for "Cirque du Cambodia" because tickets to watch its 60 films were sold to households rather than to individuals. But the film was viewed by a higher than average number of viewers at the festival and drew wide press coverage, according to Jasmina Bojic, a film critic and lecturer at California's Stanford University, who founded and directs UNAFF.

"We also know it was very popular among students and teachers who viewed it through the special program as both the screenings and the discussion underlined the value of perseverance and ambition and emphasized education as a human right," Bojic says. Top: Dina Sok gets some practice in. Bottom: Sopha Nem and Dina Sok in Montreal. (Courtesy of Joel Gershon)

The making of "Cirque du Cambodia" is also an underdog tale about the indefatigable human spirit and its will to succeed against all odds. Produced, directed, narrated and financed by Joel Gershon, an adjunct professor of media studies at the American University School of Communications in Washington, D.C., "Cirque du Cambodia" took nearly a decade to transform from an idea to finished product.

"Cirque du Cambodia" was born in 2011 when Gershon, then a freelance journalist, filmmaker and media lecturer based in Bangkok, took a trip to neighboring Cambodia. After visiting Phnom Penh and the Angkor Wat archaeological park, he stopped at the northwestern city of Battambang. There he chanced upon Phare Ponleu Selpak (Brightness of the Arts), a vocational school for disadvantaged youths, founded by former refugees from the Khmer Rouge, which runs Cambodia's top circus.

"I saw a bunch of village kids put on the most amazing artistic interpretation of the Cambodian genocide," Gershon recalls. "The performance was top notch and there was an emotional beauty to it. You could feel what they were expressing -- it was quite extraordinary. I thought it was one of the greatest things I had ever seen and wanted to share their story." Performers from Phare Ponleu Selpak, a vocational school for disadvantaged youths, give an artistic interpretation of the Cambodian genocide. (Courtesy of Joel Gershon)

Gershon's original plan was to film a documentary on Phare Ponleu Selpak's first overseas tour in the U.S., which was scheduled for 2012. But after eight months of filming the tour was canceled and he needed to find a Plan B.

"At around the same time, two of Phare Ponleu Selpak's most promising students had been accepted into the Ecole Nationale de Cirque in Montreal -- one of the top circus schools in the world," Gershon says. "It's across the street from the global headquarters of Cirque du Soleil, where they dreamt of performing someday. My family lives in New York, so the next time I went to see them I drove across the border to see if the idea of documenting their quest was feasible."

After meeting Sopha Nem and Dina Sok, Gershon knew he was onto something special. About 250 people apply for the school every year, but only 30 are accepted, a school instructor says in the film. "Not only were these two accepted but they got full scholarships," adds Marc Lalonde, former executive director of Ecole Nationale de Cirque. "It's unusual for students from those social circus programs to apply because those schools are not about training professional performers. They are about raising self-esteem." Gershon spent the next five years traveling between Thailand, Canada, Cambodia and the U.S., documenting the pair's extraordinary quest. "I saw their ups and downs, how they became fluent in French, got strong, and improved as performers. In the meantime I returned to Cambodia to film their families and saw how much they were missed -- one of many different storylines that evolved during the filming process," Gershon says. "It became this amazing adventure where I connected intimately with the subjects of the film and got a rare window into the world of elite circus performers."

Gershon received help -- and favors -- from professionals he met during his journey, including Fabien Mouret, a French drone pilot who captured stunning aerial footage of ancient Cambodian temples for the film.

"I met Joel in Thailand eight years ago and knew how passionate he was about his work," says Mouret, who is now based in Bali. "So a few years later when our paths crossed in Cambodia again and he told me he needed some aerial shots for his film, I didn't hesitate to help. I loved the idea of two kids from the countryside pursuing an impossible dream." In 2018 Gershon finished collecting video footage. But turning it into a finished film presented an entirely new set of challenges.

"It was not the easiest time in my life," he says. "I had a huge editing job ahead of me, and situations arose that made it harder than I'd imagined. I found a partner in Montreal but ultimately it didn't work out and that slowed down the project down a lot. ... The whole project became such an unreal quest. To this day, I can't believe I pulled it off."

"Cirque du Cambodia" will make you laugh ("The food in Canada is mostly just french fries," quips Dina Sok as he adjusts to the cuisine) and it could make you cry ("I think Phare Ponleu Selpak helps steer children away from drugs," says Dina Sok's mother Saraeng Heng as footage is shown of teenagers in Battambang sniffing glue on a street). Yet most of it will give you insights into the enormous trials and tribulations of the Cambodian people.

"Cambodian arts and culture had been passed on through oral transmission," says Phloeun Prim, a former member of Phare Ponleu Selpa's board of trustees. "But because of the gap created by the genocide, one of the most important things for the country was to bring back its identity." In that respect, "Cirque du Cambodia" helps greatly to narrow the gap.