Genius marketing squeezes most from blockbuster 'Your Name' 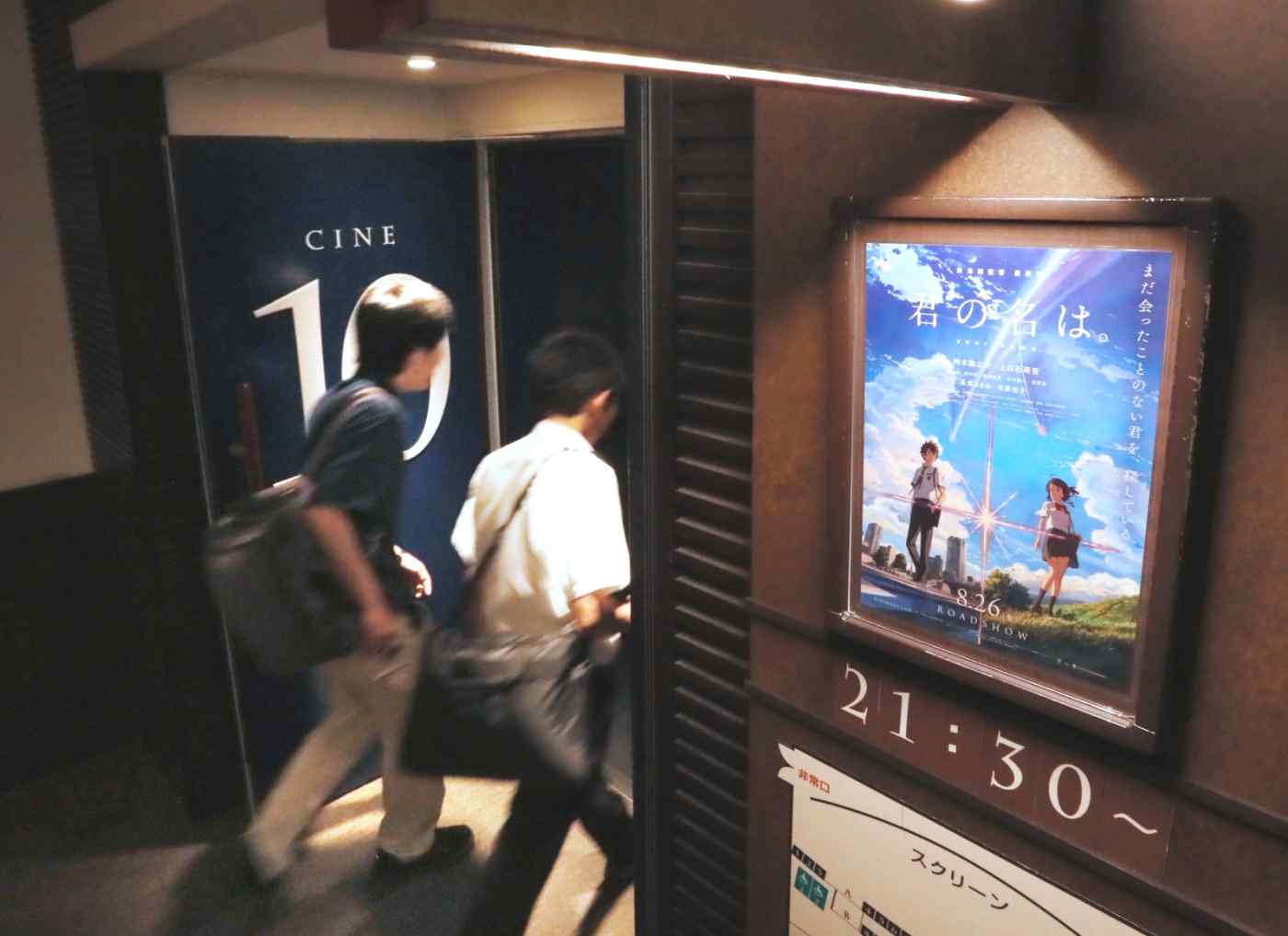 TOKYO -- Nearly a year after its theatrical release, "Kimi no Na wa" ("Your Name") from director Makoto Shinkai is still on a tear. As an estimated 1.2 million DVDs and Blu-rays were shipped on July 25, theaters were still showing the powerfully riveting anime.

It is unusual for a distributor to release the disc version of a movie before theater showings end, but this was no accident. Toho, the movie's distributor, knew it had a hit and came up with a clever marketing strategy to gain -- and maintain -- a huge fan base.

The Nikkei Asian Review on July 8 went to Cinecitta, a multiplex in Kawasaki, Kanagawa Prefecture, southwest of Tokyo, to talk to some of these fans. The movie shows there every night at 9:30.

More than 30 movie-goers were ready for the screening when we showed up.

"I have seen the movie at least 10 times," a 49-year-old man from Yokohama said. "Both the images and the story are beautiful." Romance is just a tap away

Japan's 'Your Name' debuts at No. 1 in South Korea

"Your Name" first hit cinemas last August. Izuru Kawabe of Citta'Entertainment's public relations and advertising department said no other Japanese movie has ever lived as long of a theatrical life as "Your Name."

Shinkai described the anime as "a miracle," but the truth is a lot of marketing went into the making of this particular sensation.

In one collaboration, Toho teamed up with shopping mall operator Parco to operate "Your Name" cafes in Tokyo, Osaka, Nagoya and other big cities. The eateries attracted some 90,000 customers and generated about 200 million yen ($1.8 million) in sales.

In May, when Toho began accepting "Your Name" DVD and Blu-ray orders, the distributor started hosting events across Japan.

A month later, a Makoto Shinkai exhibition opened at the Ooka Makoto Kotoba Museum in Mishima, Shizuoka Prefecture. The presentation -- put together by education services company Z-kai and other parties -- features "Your Name" story boards.

Mikiya Sato, a 19-year-old from Saitama Prefecture, said he was pleased to get to see aspects of the film. Museum chief Yoshiaki Seki said he is grateful that Toho allowed so much freedom in organizing the exhibit. Toho also has been flexible when it comes to merchandise sales.

Toho executives and their counterparts at CoMix Wave Films, the Tokyo-based video production company where Shinkai works, discussed what kind of merchandise would be allowed to use 'Your Name' intellectual property. They agreed to allow everything except products in two categories -- anything that offends public order and morals as well as anything that children are not allowed to buy, like liquor.

So far, more than 400 kinds of "Your Name" products have been made.

The Loft chain of specialty product stores on July 15 joined hands with Gray Parka Service, a Tokyo-based goods maker, to launch special "Your Name" sections. At Loft's flagship Shibuya store, more space is given to "Your Name" goods than to merchandise from the Toho film "Mary to Majo no Hana" ("Mary and the Witch's Flower"), released on July 8.

Currently, consumer electronics chains are only allowed to show off 4K sets with landscape videos provided by TV makers. But Bic Camera wanted to use 4K images from "Your Name." At a Bic Camera outlet in Ikebukuro, in Tokyo's Toshima Ward, 4K "Your Name" videos can be seen in the TV department and in the DVD/Blu-Ray section.

Usually, DVDs and Blu-rays are released six months after a movie opens in theaters. "Gosaigyo no Onna" ("Black Widow Business") made its cinematic debut a day after "Your Name" hit screens, then made it to packaged media in March. 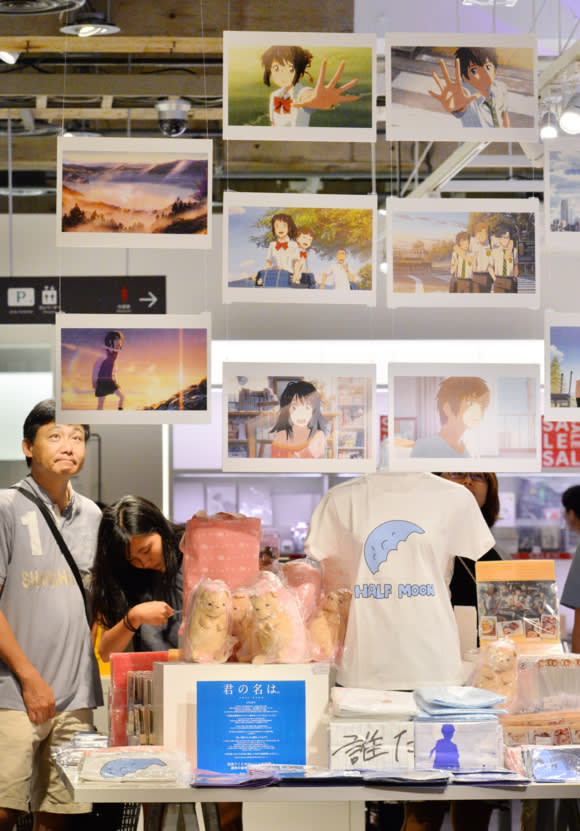 The Loft store in Tokyo's Shibuya Ward has set up a special "Your Name" section. Even a museum in Mishima, Shizuoka Prefecture, is banking on the film.

Since "Your Name," Shinkai has won acclaim for his unique visuals, but he was little known before the big blockbuster. A previous work, "Kotonoha no Niwa" ("The Garden of Words"), couldn't even get to 100 million yen in box office sales.

This time, perhaps sensing the bonanza it was sitting on, Toho wanted to bring Shinkai's ideas to as many kinds of audiences as possible. In June 2016, before the anime's release, Toho persuaded Shinkai to publish a novel version of his story. Toho also hosted previews across the country to increase Shinkai's profile; they drew a combined audience of more than 40,000.

When the film was released, it held the top spot in weekend box-office sales for nine straight weeks. Distributors usually reduce the number of theaters a movie is showing in as newer releases take over the charts. But Toho took steps to make movie-goers remember "Your Name."

In Japan, many audience members buy programs, magazinelike publications that describe a film. With a popular movie on its hands, Toho on Dec. 9 released a rare second edition of the "Your Name" program. In it, Shinkai answers more than 50 questions solicited from fans.

Toho's efforts paid off as "Your Name" moved back up to second place in the weekend box office ranking at the start of 2017.

Yoshihiro Furusawa, an executive producer of the film, predicts "Your Name" will be an evergreen success that keeps spurring consumption.