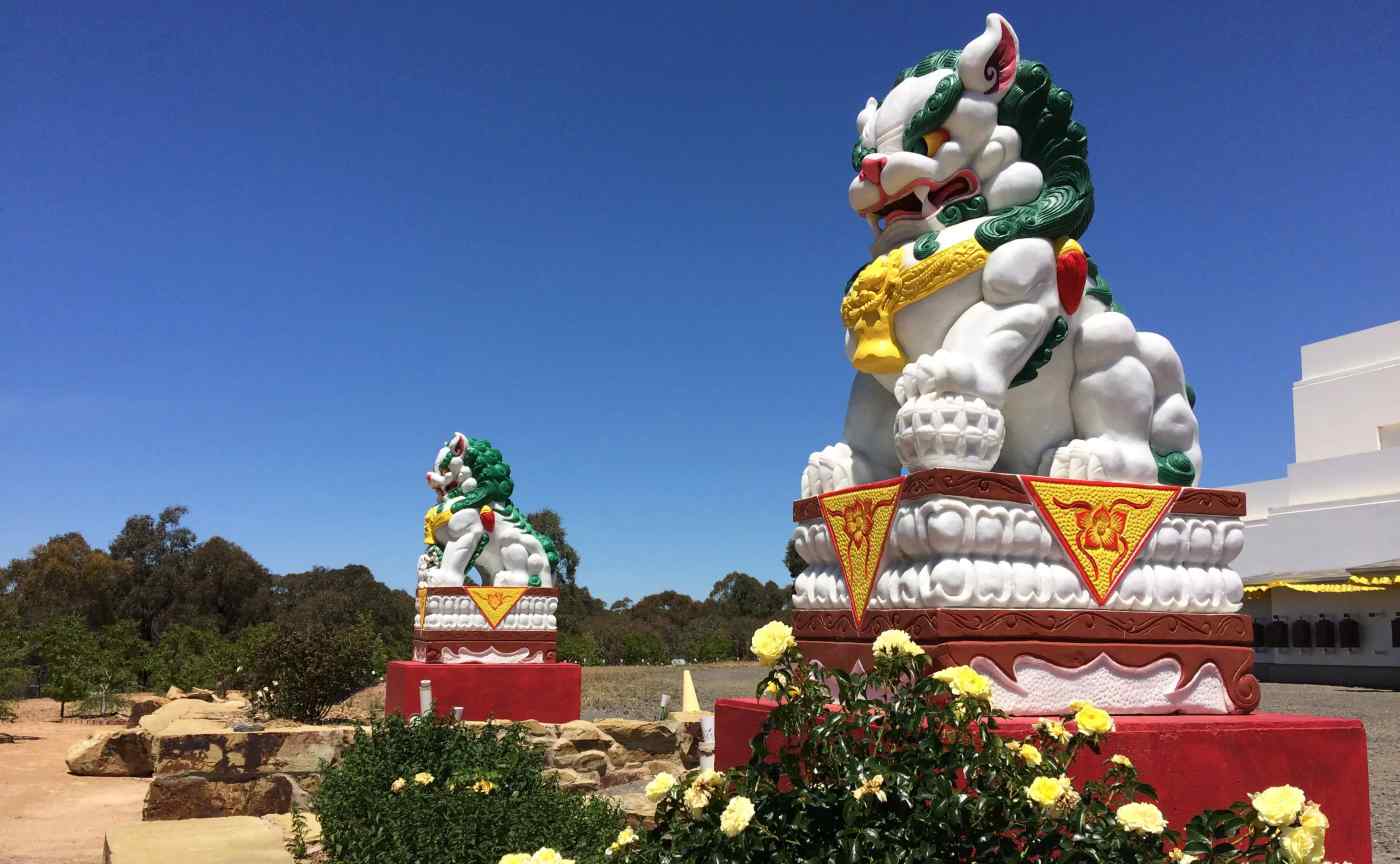 MELBOURNE -- Shimmering white against the bright blue Australian sky, in a quiet corner of bushland 160 km northwest of Melbourne, a large concrete structure that is home to one of the most important artifacts in the Buddhist world is taking shape.

This is the Great Stupa of Universal Compassion, guarded at its entrance by two marble Tibetan snow lions, vibrant in red, yellow and green, and ringed by scores of bronze prayer wheels.

Inside the main hall of the stupa, or pagoda, is the magnificent Jade Buddha for Universal Peace, claimed to be the largest of its type in the world, a lustrous, four-ton representation of Buddha that joins similar famous statues such as those at the Wat Phra Kaeo Temple of the Emerald Buddha in Bangkok, the Shwedagon Pagoda in Yangon, Myanmar, and the Jade Buddha Temple in Shanghai, China.

The stupa -- a square building measuring 50 meters by 50 meters at its base -- is almost 50 meters high and is being built to the same design and size as the 15th century Gyantse Stupa in Tibet. Its creation is the culmination of a 20 million Australian dollar ($14 million) project by a group of Buddhist devotees, led by former Melbourne advertising executive Ian Green, 72. Green, who embraced Buddhism in the 1960s during a trip to India, is the Australian director of the Foundation for the Promotion of the Mahayana Tradition, a worldwide teaching and study organization that follows Mahayana, one of the two main branches of Buddhism. The Great Stupa makes an intriguing spiritual and cultural addition to the tourism attractions of Bendigo, best known internationally for its 1850s gold rush, when tens of thousands of prospectors flocked from China, North America and Europe in search of fortune. While the city's golden history is still a big lure for visitors, the Great Stupa at Myers Flat, a few kilometers away, is a new place of pilgrimage that draws Buddhists from China, Japan, Thailand, Vietnam, India and Nepal, as well as Australian and other Western devotees.

"Serene" and "peaceful" are the most common descriptions in comments written in the stupa's visitors book. Bendigo City Mayor Margaret O'Rourke calls it a "fantastic asset" for the region, adding that it makes an important contribution to Bendigo's "cultural brand." O'Rourke told the Nikkei Asian Review that it was rated on TripAdvisor among the top three or four local attractions, and its two annual festivals were a welcome addition to the city's events calendar.

The centerpiece of the stupa is the 2.5-meter-tall Buddha, modeled on a Buddha in the Mahabodhi temple complex in the Indian village of Bodh Gaya in Bihar state. It was carved in Thailand in 2008, blessed by the Dalai Lama during a visit to Australia in 2009, and after a nine-year, 20-country tour came to Bendigo in May 2018 for its installation on a 1.6-meter high alabaster throne inside the stupa. 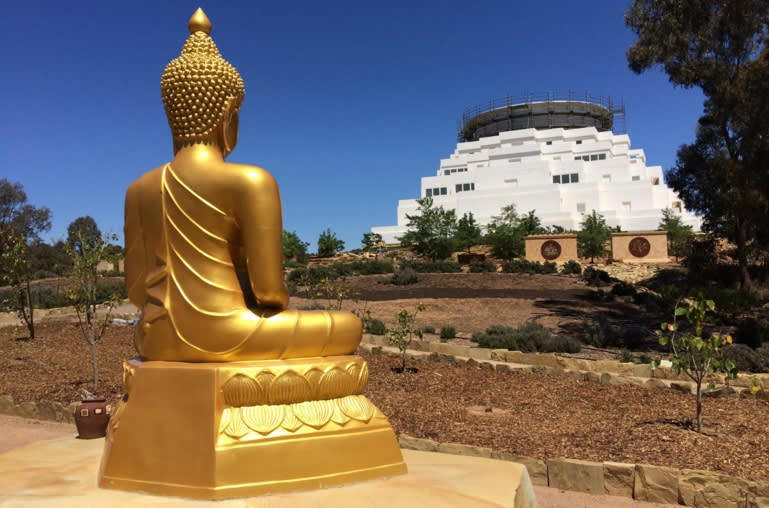 A fiberglass Golden Buddha, a gift to the Great Stupa from a Thai benefactor,  sits in the grounds of the Peace Park. (Photo by Geoff Hiscock)

It sits in serene splendor inside the Great Hall, flanked by an image of the Dalai Lama on one side, and a small Jade Tara, the female embodiment of the Buddha, on the other. The Tara comes from the same Canadian jade boulder.

Building the Great Stupa has been a 15-year labor of love for Green, who since the early 1980s has been running a Buddhist retreat and teaching center known as Atisha, near the site of the stupa. He said he expected the stupa's circular terrace to be completed and lifted onto the top of the existing structure by next August.

According to Green, about 60% of the 30,000 people who come to the Great Stupa each year are non-Buddhist. During a recent visit, the range of visitors crowding the stupa included local residents curious to see how work was progressing, along with tourists from the U.S., Europe and Asia. People thronged into the Great Hall, some to pray before the Buddha, others simply to stand and gaze.

The story of the Jade Buddha began near Lake Dease in the northwest of the Canadian province of British Columbia in 2000, when a group of miners found an 18-ton slab of gem-quality nephrite jade that they dubbed "Polar Pride." It would later be described by international gemologist Fred Ward as the "find of the millennium." Prayer flags flutter in the wind in the grounds of Bendigo's Great Stupa. (Photo by Geoff Hiscock)

Green first saw the Polar Pride in 2003 in Vancouver, Canada, where it was stored by the Canadian mining entrepreneur Kirk Makepeace. Green's spiritual master, Lama Zopa Rinpoche, a Nepalese co-founder of the FPMT in 1975, urged him to buy the jade boulder and turn it into a holy object that would illuminate the world. The FPMT's other co-founder, the late Lama Thubten Yeshe, had the original vision for the Great Stupa when he visited Green's Atisha center in 1983.

Over the next five years Green raised the funds to buy the Polar Pride and ship it to Thailand, where a group of Thai master carvers at Jade Thongtavee in the northern town of Mae Sai completed its carving and polishing in December 2008. The gold face of the Buddha was painted by a Nepalese artist. Every chip that came from Polar Pride during the carving process was collected and turned into mementos that are sold at the Great Stupa and online.

Green has said that the dome-shaped building is designed to last 1,000 years and, like the great cathedrals of Europe, probably will not be completed for another 150 years. When the basic exterior work is finished, the stupa will house one of the largest collections of sacred Buddhist relics in the world, drawn from Chinese, Tibetan, Thai, Burmese and Mongolian traditions. With the encouragement of the Dalai Lama, the stupa also houses a library designed to foster research on Buddhism, other religions and contemplative philosophies, and science. 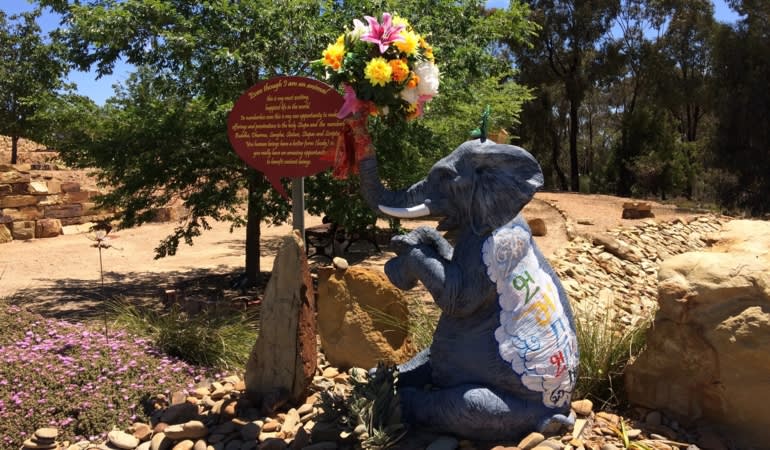 This painted elephant in the grounds of the Peace Park is one of three offered to the Great Stupa by Lama Zopa Rinpoche. (Photo by Geoff Hiscock)

For Green, the stupa and its landscaped surroundings, which include a Peace Park, a waterfall and flower gardens, sandstone memorial walls and gifts from other faiths -- such as a statue of St Francis of Assisi -- are the essence of a project that is designed both to be a place of pilgrimage for Buddhists from around the world and a center for inter-faith understanding.

It is also a striking example of globalization in action -- the Tibetan snow lions were carved in Vietnam, the prayer wheels were crafted in Nepal, the sandstone walls were quarried locally, a fiberglass Golden Buddha that sits serenely in the grounds of the Peace Park looking across to the Great Stupa was a gift from a Thai benefactor, and the Bodhi trees came from cuttings that can be traced back to the original Bodhi tree (ficus religiosa) in Bodh Gaya, under which the Buddha is believed by adherents to have gained enlightenment 2,500 years ago. The Dalai Lama brought the first of the park's Bodhi trees to Australia.

"We are working on the landscaping and stone walls every week, and expect to complete this within three years," Green said. "All together, we have about 2 km of stone walls and 2,500 plants and trees in our garden."

The Great Stupa and its Jade Buddha are a long way from their cultural and geological origins in Tibet and Canada. But they have received a broad welcome from the people of Bendigo, and look like becoming an integral -- albeit improbable -- part of the Australian landscape.