Haruki Murakami on life as a radio DJ

Japanese author believes COVID has made his fiction even more relevant TOKYO -- For international bestselling author Haruki Murakami, now is an essential time for novelists to create as many positive things as possible amid the growing uncertainty created by the COVID pandemic.

With a radio program currently being broadcast on Tokyo FM and affiliated radio stations across Japan from 7 p.m. on the last Sunday of each month, the globally acclaimed writer sat for an exclusive interview with Nikkei to share his feelings about becoming a radio broadcaster and how artists should meet the challenges created by the coronavirus.

Q: It has been three years since you started serving as a presenter for Murakami Radio, which became a regular program in April. How are things going for you?

Murakami: Working as a DJ is almost a hobby. As I am a record collector, I have made various proposals, such as "there is music like this, so let's listen to it." I have come up with many ideas, one after another. The lineup for the program in the next two to three years has already been produced in my head. But if I had to go on the air more than once a month, I would interfere with my work as a writer. But the truth is that I actually want to work as a DJ once a week.

Q: While you have inherited the tradition of playing music yourself as a DJ, you seem to like exploring a modern program. Is that correct?

Murakami: It is now possible to listen to music on the internet as much as you want. In that sense, requesting songs on the radio is meaningless. I think approaching this more like a specialty boutique, where the presenter chooses and plays music, has more meaning for the listeners. I want to create a feeling of closeness, as if people come into my study to listen to music with me. It is my policy to play pieces that are not played on other programs. I want to see listeners being surprised at least every third song, and have the realization that "I didn't know this kind of music existed on Earth until now." I like radio because of the atmosphere it creates, in which people listen individually yet share the experience together. It is quite different from TV or the internet. I feel comfortable in this intimate and personal space. 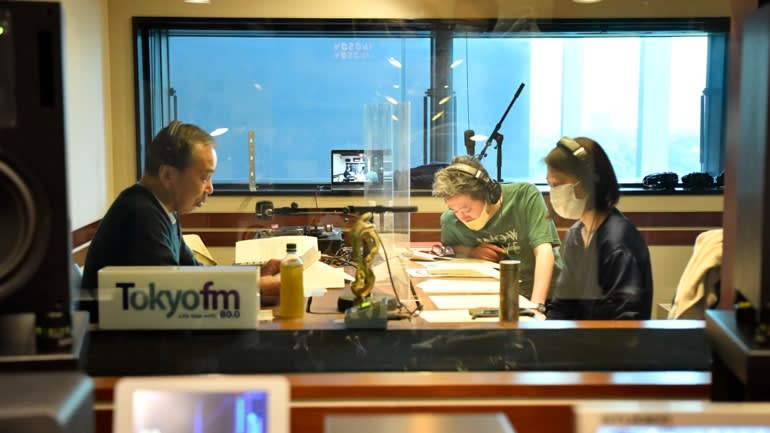 Murakami says he wants listeners to feel as if they are in his study enjoying music with him. (Photo courtesy of Tokyo FM)

Q: You also referred to the scourge of coronavirus during your program, seeing it not only as a sudden plague but also as another thing that has changed the world, along with other things such as globalization and climate change. I have been impressed by your point of view.

Murakami: I feel that if people recall the present day 100 years from now, they will recognize that all these factors came together and became intertwined. What worries me most is how young people feel in this situation and what will happen to them. It can be better or worse. I think that it is the role and responsibility of a novelist and a radio station to create and provide as many positive things as possible. When I was in my teens, I thought that the world would get better. But today's teenagers probably think that the world would get worse. We must put the brakes on such a deteriorating mindset. Young people are now closed-off, and in the post-coronavirus period, will they start pursuing relationships with others or remain isolated? I am worried about what will happen to them. Real and unreal things are inherent in my writings in a very usual manner, where the potential for something paranormal occurring is already factored in. Overseas countries where my novels are accepted are those facing turbulence, such as Germany when it was coming to terms with reunification, or Russia following the collapse of the Soviet Union. In that sense, I have a feeling that my novels, in which the real and unreal exist simultaneously, might be sending implicit messages.

Q: It is 42 years since you made your debut as a writer. Does your view that the starting point for the novelist is kindness remain unchanged?

Murakami: Translating foreign works into Japanese only means kindness. The reason why I like translating is that I can extract the goodness of my heart. Also, when writing novels in Japanese, I avoid using complex or genteel language because it is still possible to write appropriately. Haruki Murakami is recording his program "Murakami Radio" at the studio of Tokyo FM. (Photo courtesy of the station)

Q: The Waseda International House of Literature, also known as the Haruki Murakami Library, is scheduled to open in October at Waseda University, your alma mater. A sign featuring your call "Explore your story, speak your heart" will be put up there.

Murakami: Stories are essential for me. Telling a story makes it possible to express things that cannot be explained in a logical manner. I want to create such a place.

Haruki Murakami: Born in 1949. He made his debut as a writer by publishing his first novel "Hear the Wind Sing" in 1979. His works have been translated into more than 50 languages. The title of his latest Japanese book translates as "My Good Old Classical Records."