A dose of modernity revitalizes traditional art and attracts crowds PENANG, Malaysia -- At the back of a typical Malaysian-Chinese temple filled with the heavy smoke of burning joss sticks, a small group of elders sit on low stools around a wooden stage. Two crouch below the theater's frame, holding up wood-and-cloth puppets on one hand, giving the characters voices with the microphones they hold in the other. They are performing the traditional Hokkien tale of kung fu expert Ma Lek, who rescues a girl from her kidnapper. As the exciting tale unfolds, musicians at the side of the stage strike gongs and cymbals, cranking up the sense of drama in the temple hall.

This is Hokkien potehi, a type of glove puppet theater that shares themes and characters with Chinese opera. Potehi performances can last up to three hours; troupes improvise over the structures they perform daily for years at temples all over northwest Malaysia. Potehi originated in the southern Chinese province of Fujian and the ancient city of Quanzhou was one of its centers. The earliest historical data of performing troupes date back to the 18th century, but the genre itself is thought to be much older. From the late 19th century, migrant workers spread the art to Taiwan and Southeast Asia. The island of Penang, a thriving colonial port in British Malaya, was among their main points of entry. In the 1940s, Penang's potehi was a very popular form of entertainment at religious festivities and funerals all over the state: More than 10 troupes would mesmerize the crowds with spectacular scenes, such as the fight between the centipede and the cock in "The Monkey King Adventures" and dramatic uses of fire on stage.

But today, the art is dying. Only four troupes of aging performers -- Beng Geok Hong, Sin Kim Hong, Guat Poh Hong and Sing Hong Eng -- remain active, forced by the lack of interest to keep potehi in the temples, the only way they have to squeeze a living. 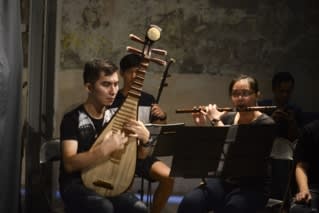 "They have no audiences, as few understand classical Hokkien," said Tan Sooi Beng, a prominent Malaysian ethnomusicologist and a professor at Universiti Sains Malaysia, who studied this unique art for years, and is now trying to help revitalize it.

Dutch expert Robin Ruizendaal, who is also the artistic director of Taiwan's Taiyuan Puppet Theatre Company, confirms the singularity of Penang's potehi style: "Its mixture of traditional seated performance by the puppeteers doesn't exist anymore in Taiwan." Ruizendaal says that the musicians play Taiwanese gezaixi, a form of Hokkien opera based on folk stories and popular songs, which is already obsolete in Taiwan's puppet theaters, and beiguan, a style of percussion.

Ruizendaal, co-author of "Asian Theatre Puppets" published in 2009 and "Potehi: Glove Puppet Theatre in Southeast Asia and Taiwan" published in 2016, says in Taiwan, the government proudly supports potehi as a form of popular entertainment.

"Potehi receives no funding from Malaysia's Ministry of Culture and Tourism," Tan told Nikkei Asian Review. "On top of that, Chinese associations and the local Chinese population don't promote this art form, preferring Chinese orchestra and lion or dragon dances as markers of their identity." Due to a lack of support and funding, the four remaining potehi troupes have no interest or means to invest and improve their shows and reach wider audiences. A potehi entertainer manipulates puppets while narrating the performance from behind the stage. (Photo by Chew Win Chen)

"They sleep on straw mats on the stage, men and women, together... such a hard life," said Liew Kung Yu, 57, a Kuala Lumpur-born visual artist who grew up in the northern state of Kedah, neighboring Penang. After helming the artistic direction of the George Town World Heritage Celebrations on July 6-7, 2014, Liew met with potehi performers again. He then applied for a grant to help with the restoration of the puppets. "We need to give them the credit they deserve in carrying on this art against all odds," he said.

Liew's involvement led to the creation of Kar-Wan Potehi (Friends of Potehi), that includes him and Tan, photographer Chew Win Chen, and researchers Ong Ke Shin and Foo Wei Meng. The team studied and documented the four Penang potehi troupes for two years. The result is a multimedia production, "Potehi Glove Puppet Theatre of Penang."

Attractively housed in a cardboard box resembling the chest where the potehi performers store their puppets, the set includes a large-format book, two additional flip books showing the performance's movements, an illustrated timeline of the art's diaspora and development, a DVD, and a pop-up cardboard stage that explains how it all works. "We designed the volume to be interesting and interactive, to educate the public about what potehi really is, keeping the feel of this cultural tradition," Liew said.

Tan, however, said that "book documentation and research are not enough to revitalize any form." She helped create the Ombak Potehi troupe under the Penang-based art collective Ombak-Ombak ARTStudio, encouraging young people to learn puppet manipulation, folk music and narration directly from the masters, Ooi See Han and Chuah Saw Tin of the original Beng Geok Hong troupe. Ombak Potehi's goal is to adapt the original plays to modern sensibilities and the industry's requirements. 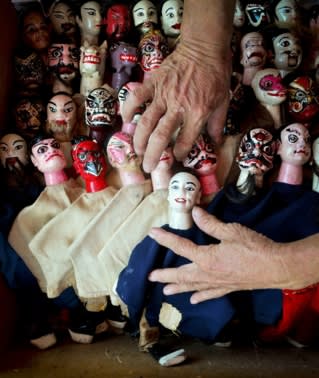 "We summarize and shorten the original plays to 20 minutes, so that we can keep the crowd's attention, and also fit into festivals' tight schedules," said Marcus Lim, one of the group's drummers and puppeteers. He joined in 2015 thanks to his interest in Hokkien opera. At the moment, the group performs two shortened versions of famous original plays, "The Love Story of Ma Lek" and "Journey to the West."

"We transform the oral stories into real scripts, and pepper them with poetic Hokkien expressions that are lacking in the original plays," Lim added. "We also use a real musical ensemble: Three to four people play the flute, the Chinese pipa (a lute) and the erhu (a two-stringed fiddle). The elders in the crowd are always excited to see a full potehi line-up, as they haven't in decades."

In multiethnic Malaysia, the group's performances at local events such as the George Town and the Butterworth Fringe Festivals attracted over 400 people from all walks of life. "We succeeded because we provide English, Malay and Mandarin digital subtitles to the Hokkien dialogues," Tan said. "Before shows begin, we tell the audience about the story, the character types, and the musical instruments. At last, after each performance, the crowd can join us backstage to try manipulating and playing with the puppets."

Ombak Potehiis working on a new play based on interviews with local residents whose ancestors settled in Penang in the last century. "Uniting West Malaysia's three main ethnic groups with glove puppets? That will be difficult; but we hope to make potehi accessible to all races," said Tan.

For now, the future looks promising. Even Ooi of the original Beng Geok Hong thinks that, at last, "Potehi ki liao" (or "Potehi is rising" in Hokkien).