Hong Kong embraces its role as a global art hub 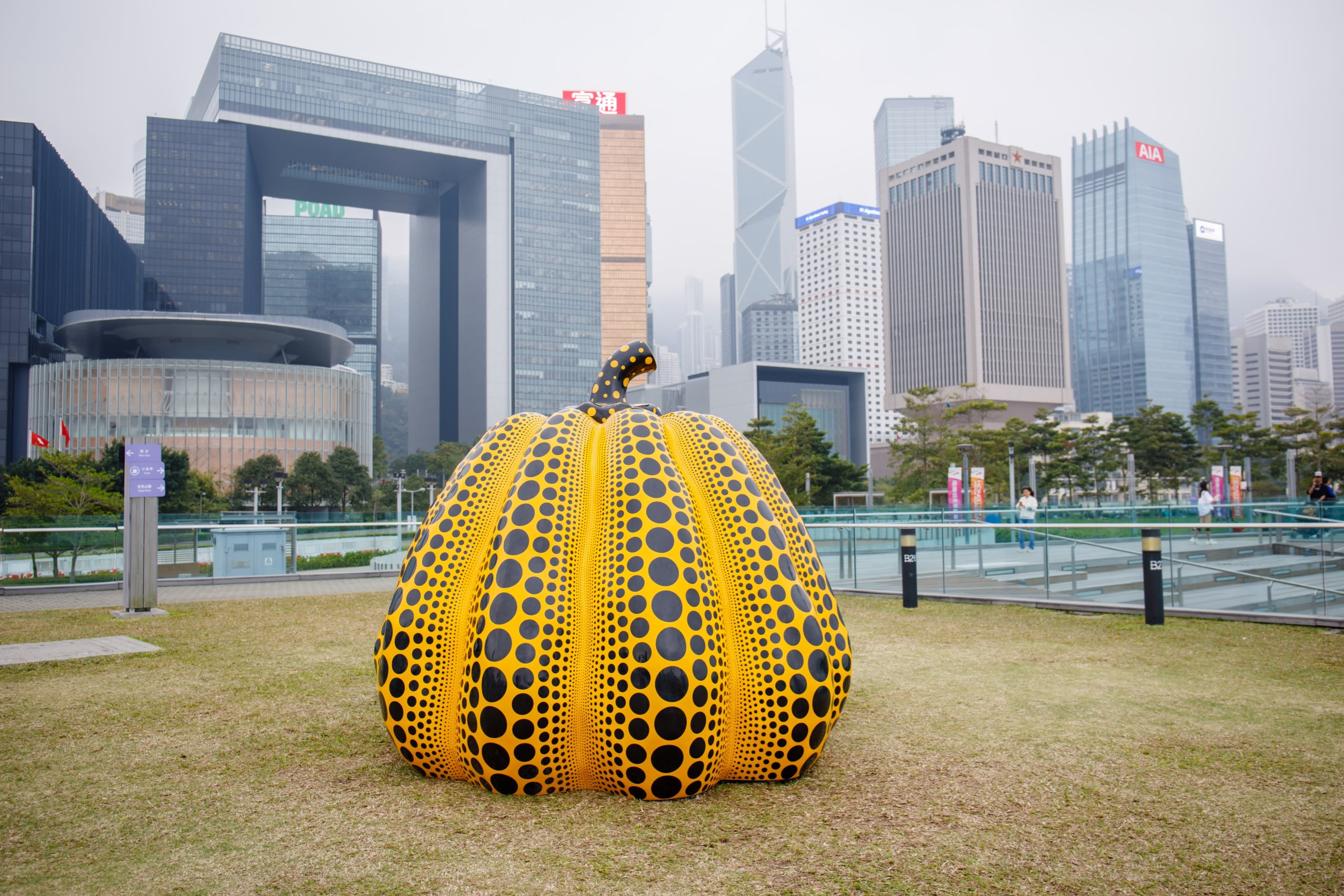 HONG KONG -- As recently as a decade ago, Hong Kong was little more than an afterthought on the international art scene. While it had established itself as an important regional hub, and major auction houses had been here for decades, Hong Kong was not a city etched on the global art schedule.

How things have changed.

This month, collectors, dealers and artists from around the world are descending onto Hong Kong, transforming the city into a massive exhibition space during what is now commonly referred to as "art month," which culminates this week with the annual Art Basel Hong Kong fair, the kickoff of spring auctions, gallery openings and related events.

Hong Kong is now an essential "go-to destination," said Adeline Ooi, Asia director for Art Basel Hong Kong. "We have always been talking about building a bridge" between Asia and the rest of the world, she said. Art Basel Hong Kong, now in its sixth year, is an annual meeting point and "an important week" in the art calendar, she added.

Hong Kong's embrace of its new role has even brought an addition to the skyline of this property-obsessed city. The recently opened H Queen's, a 24-story building in the heart of the Central business district operated by one of the city's major property companies, Henderson Land Development, is devoted to international and local galleries, drawing such blue-chip names as Pace Gallery, David Zwirner and Hauser & Wirth. 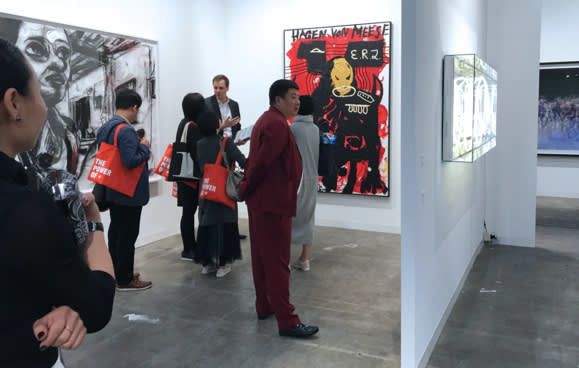 Art Basel Hong Kong, now in its sixth year, is one of the main events during the city's "art month" of March. (Photo by Dean Napolitano)

Likewise, the city's famous scenic harbor front is the temporary home of an outdoor sculpture park, presented by the Hong Kong Arts Centre, and featuring works by such renowned artists as Zhan Wang of China and Yayoi Kusama of Japan.

Major companies also are looking to inject art culture into Hong Kong society with public exhibitions. Swire Properties, a unit of Hong Kong-listed Swire Pacific and a partner of Art Basel, is featuring a large installation piece at its upscale Pacific Place shopping mall. It also has transformed one of the city's bustling metro train stations into a gallery space and is sponsoring live street art performances.

Hong Kong's proximity to China, its strong legal system and its long history as a tax-free port for trade and commerce give it an important advantage over cities in Asia. While Singapore is a rival hub for the Southeast Asian art market, with its annual Art Stage Singapore fair, galleries and dealers say Hong Kong is the undisputed center for Asia. 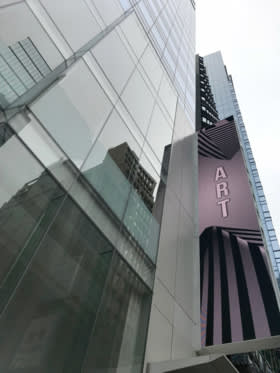 The 24-story tower H Queen's in the heart of the business district is home to several international art galleries. (Photo by Dean Napolitano)

"Hong Kong has a very good position as an art hub," said Kathryn Shih, president, UBS Asia Pacific in Hong Kong. The city's tax-free zone is an important benefit of having an art hub in Hong Kong, when galleries and auction houses bring in art works for sale or exhibition. "There's no extra red tape," she said. The Swiss bank is Art Basel's global lead partner in Hong Kong, sponsoring major events, as well as its fairs in Basel, Switzerland, and Miami Beach, Florida.

Shih also said the city's logistics system plays a vital role. "Having a port and very good infrastructure in Hong Kong is important in transporting all art into Hong Kong for resale or for exhibition." Equally important is Hong Kong's reputation as one of the world's safest major cities, "so art collectors can come in safely, the art pieces come in safely," Shih said.

China last year regained its position as the world's second-largest art market after the U.S., with 21% of an estimated $63.7 billion in total sales, or about $13.2 billion, according to a new report published by Art Basel and UBS.

"With Chinese sales embarking on an unprecedented boom and the British market recovering from the fallout of the global financial crisis, China maintained dominance until 2014," the report said. "In 2015 and 2016, the U.K. regained some share and moved up in the global ranks again, however, a strong year of sales in China in 2017 and a weak pound meant that in 2017 China was once again in second position by a small margin."

Asia accounted for 23% of global art sales last year, the report said. "Although this is still significantly less than the EU, at 33%, the buoyant wealth dynamics in Asia and strong local markets suggest that its share could increase in the future."

Asia's rise as an art market has mirrored the growth of wealth and affluence in the region. A survey of private bankers and wealth advisers in Knight Frank's 2018 wealth report showed that 28% of their Asian clients actively collect an "investment of passion," or luxury items, including art, wine, jewelry, watches and classic cars. 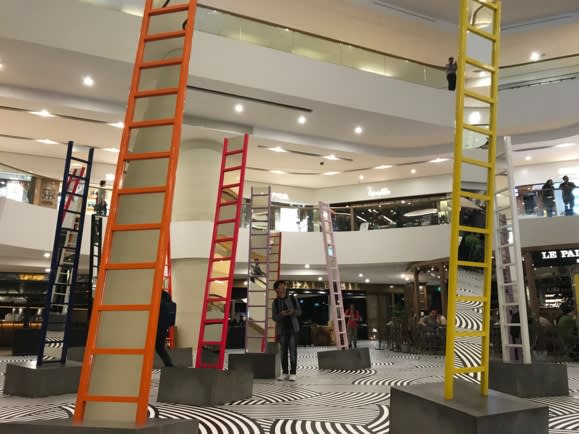 Major international galleries have taken notice, but they say their clients are buying art for both investment purposes and for aesthetic appeal.

"China is the place a lot of foreigners are looking at, because the country has produced a big number of new or young collectors over the last three years," said Leo Xu, the Hong Kong director of David Zwirner, the New York-based gallery that opened its first space in Asia earlier this year.

While Xu described collectors from mainland China as a "buying force," he said the gallery's clients are looking beyond art's investment potential. Investment may have been an initial lure into the market, he said, "but in the end they are being a very supportive part of the community." Many are becoming patrons of art by supporting museum programs and paying for artists' residencies, he said.

Henrietta Tsui-Leung, the owner of Galerie Ora-Ora and founder of the Hong Kong Art Gallery Association, said her clients, too, are looking for more than just an investment.

"There are so many options in Hong Kong where you can make returns -- and much faster than art investment," Tsui-Leung said. "So most of my clients are more interested in art because of their growing interest" in the aesthetic pleasure it brings.

She said the number of her clients from China is expanding rapidly and they are quickly educating themselves on contemporary art. "Just five years ago, you would see Chinese collectors or just interested parties, walking around, asking questions," she said. Now, they are actively collecting art.

Galleries are eager to cultivate new collectors, too.

It is important to understand why collectors want to buy art and what they want going forward, said Leng Lin, Pace Gallery partner and director of Pace Hong Kong, Beijing and Seoul. New York-based Pace recently opened its second gallery in Hong Kong.

"Through different ways, we get close to them, and study and work with them and know how they want," he said. 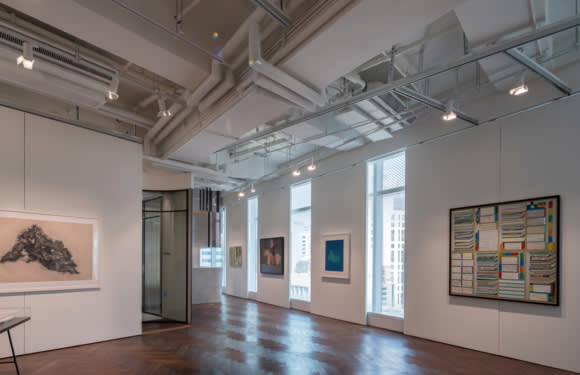 Auction houses, too, are looking to expand their client base.

Phillips also sees opportunities in Hong Kong. The London and New York auction house held its first sale in Hong Kong less than three years ago, and is opening its first gallery in the city this week.

"What we're hoping is, of course, that there are more and more Asian collectors that get to know us," said Lilly Chan, Phillips' managing director for Asia.

Collectors in Asia naturally begin with what they are most comfortable with, Chan said, "whether that is Chinese art or Indonesian art or Japanese art." But as collectors step into the international market, they become more global. "That is very different than from even 10 years ago," she said. "There are a lot of influences on the global platform."

At Sotheby's in Hong Kong, this month is particularly busy. Its five-day spring sale starts on March 30, and it is holding a 16-day exhibition of 42 works by Pablo Picasso and George Condo, 31 of which are for sale, valued at roughly $300 million, the largest show it has ever organized in Hong Kong.

Sotheby's held its first Hong Kong auction in 1973, focusing solely on Chinese art. The U.K.-based auction house has since expanded into 10 selling categories in Hong Kong, and its auction sales have ballooned two-and-a-half-fold over the past 10 years to HK$6.6 billion last year from 2.6 billion Hong Kong dollars ($331.6 million) in 2007.

While some novice collectors come into art as investors, they realize there are "other joys to be had," said Ooi of Art Basel Hong Kong. "There is a great social role that can fulfill and enrich people's lives."