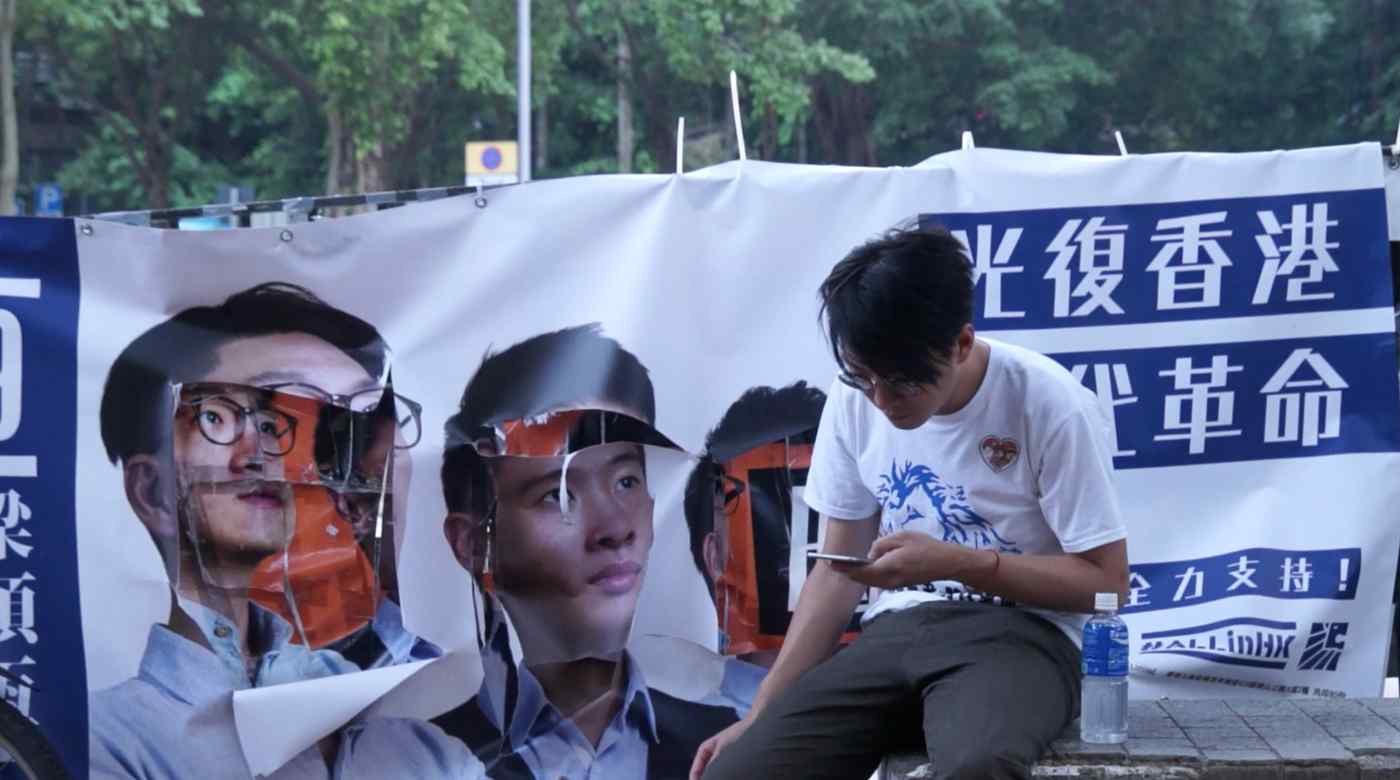 HONG KONG -- It is a hard-fought movie ticket.

Over the past four months, more than 4,000 seats for 30 screenings of a politically charged film in Hong Kong were selling out in a few hours.

Nevertheless, the enthusiastic reception for "Lost in the Fumes" failed to persuade a single commercial cinema in the city to show the documentary, which depicts the personal story of the controversial localist leader Edward Leung Tin-kei.

Movie theater representatives "said they don't dare to show it, especially during this sensitive time," Nora Lam Tze-wing, the film's director, told the Nikkei Asian Review in an interview.

The 22-year-old director said cinemas in the city have rejected showing the movie since its debut at the Hong Kong Arts Centre last November -- two months before Leung's trial on riot and assault charges began. Leung had been the spokesman of the Hong Kong Indigenous political party, but resigned just before his trial, which is ongoing. 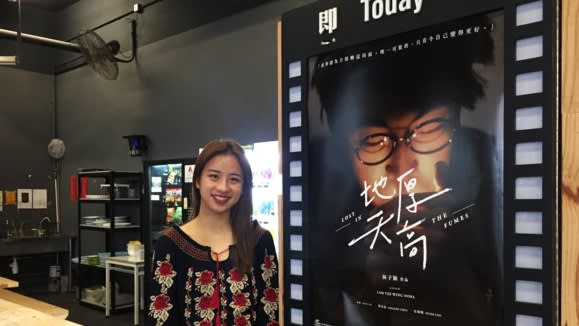 Nora Lam Tze-wing, director of "Lost in the Fumes," held screenings in community theaters after being rejected by commercial cinemas in Hong Kong. (Photo by Michelle Chan)

Once a rising star in Hong Kong politics, the 26-year-old Leung is now in custody and faces a maximum sentence of 10 years in prison for taking part in a localist protest, which later escalated into clashes, in 2016.

With cinemas declining to show the documentary, Lam and her production team held screenings in arts centers, museums and schools. Vincent Chui Wan-shun, producer and distributor of "Lost in the Fumes," said the movie's observations on Hong Kong independence are "intimidating" to local cinema operators. Chui said some told him that they could not show the movie due to "political reasons."

Hong Kong's legal system allows some freedoms not entitled in mainland China, but many of the territory's businesses -- with an eye on their financial interests -- avoid activities that they deem could anger Beijing.

"We even offered to guarantee all screenings will be full-house, or else we would pay for the empty seats," Chui said. "I find it extremely strange that cinemas in this money-oriented city would deny this profitable deal." 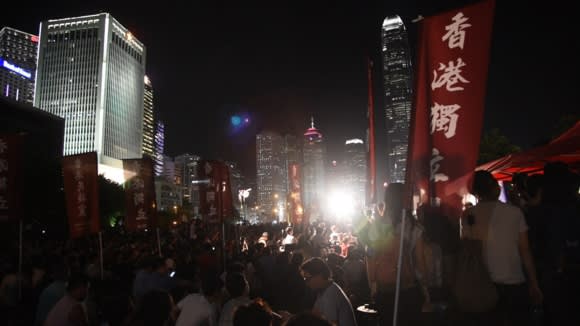 He said that ever since "Ten Years," a small-budget but award-winning film from 2015 that portrays a near-future dystopian Hong Kong under tighter mainland rule, drew intense criticism from Beijing authorities, Hong Kong cinemas have been facing pressure from "bosses with strong industry clout" who oppose the screening of "politically sensitive films."

The semi-autonomous region of China is currently under a chilly atmosphere over the discussion of independence. Hong Kong scholar Benny Tai Yiu-ting, who was one of the leaders of Occupy Central, also known as the Umbrella Movement, in 2014, was rebuked by mainland Chinese authorities after he suggested at a seminar in Taiwan in late March that "Hong Kong could consider becoming an independent state." 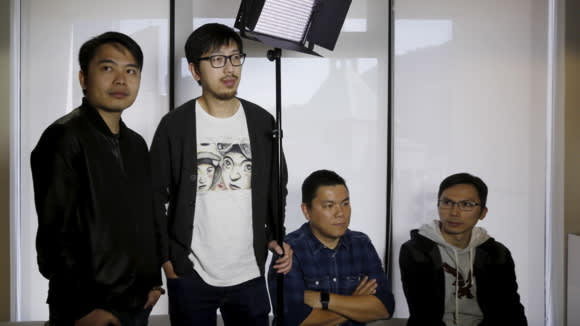 The filmmaking team of the 2015 award-winning Hong Kong movie "Ten Years." Its depiction of a future under tighter mainland rule angered Beijing.   © Reuters

Earlier last month, Chinese President Xi Jinping reiterated at the annual parliament meeting that "not a single inch of our land" would be ceded from China, warning that no separatist activities would be tolerated.

Lam's camera began following Leung in mid-2016 after she attended the election rally of the then-candidate for the Legislative Council. However, he was disqualified before the poll over what the election committee said was his support for Hong Kong independence, a position he later backed away from. "I was touched by the crowd's passion and hopes put on this young politician," she said.

Despite the series of political events featured in the documentary, Lam said she took a different angle to center on the emotional struggles that Leung was going through. She hopes audiences with differing political stances can withhold their judgment and resonate with "the story of young people pursuing their dreams." 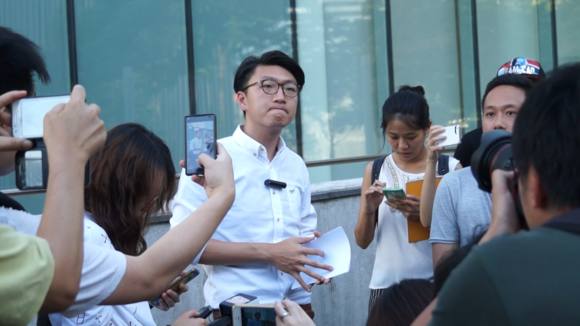 Leung’s candidacy for Hong Kong's Legislative Council was disqualified by the city's election committee over what it said was his support for independence. (Courtesy of Nora Lam)

"I was most impressed by the feedback from a member of another localist group, Civic Passion," Lam said. "He told me that he used to hate Edward Leung intensely because he snatched away a lot of votes [from his party], but now he is able to put himself in Leung's shoes," she said. "I could not imagine this kind of comment two years ago during the election."

Lam graduated last year from the University of Hong Kong with a degree in comparative literature and French. Her first feature-length documentary, "Road Not Taken," premiered in 2016 and follows two student activists at the university.

The Hong Kong Film Critics Society selected "Lost in the Fumes" as one of eight recommended films of 2017. It will have a special screening at the Foreign Correspondents' Club in Hong Kong on April 18. It also was included in the One World Romania film festival last month and will be shown next month at the Taiwan International Documentary Festival.

"We are looking to show this documentary in other parts of Asia where audiences are familiar with Hong Kong's situation and able to understand the movie well," Chui said.

Pondering the film's future screening prospects, Lam said it has "close-to-zero possibility" of being shown in major cinemas in Hong Kong, adding that the distributor may eventually manufacture DVDs or sell the film to online platforms. "Or maybe we will continue to show it irregularly in small community theaters until no one watches it," she said with a bitter smile.