Designed in 1970 by Matsushita Electric Industrial (as Panasonic was then known), the Toot-a-Loop radio doubled as a bracelet. (Courtesy of Panasonic)
NAOMI POLLOCK, Contributing writerAugust 26, 2020 08:00 JST | Japan
CopyCopied

TOKYO -- In Japan, good design is everywhere -- in streets and parks, in shops and offices and, most of all, in homes. From storage cabinets to vacuum cleaners to scissors, people in Japan are surrounded by beautifully designed daily use goods. Functional yet aesthetically pleasing, machine-made yet exquisitely crafted, many of these objects are among the most admired in the world -- some featuring in museum collections, such as Naoto Fukasawa's Plus Minus Zero Humidifier and Kazumasa Nagai's "I'm Here" posters, which belong to New York's Museum of Modern Art and Melbourne's National Gallery of Victoria, respectively.

But what makes Japanese design so exceptional? How can one country produce so many distinct and wonderful things? Keen to learn more, I set out to document the creative forces behind Japan's postwar design culture. That study led to the book "Japanese Design Since 1945: A Complete Sourcebook," to be published in October.

In many ways, my research began with a chance encounter with the Spoke Chair, a design masterpiece created in 1963. The chair's elegant shape -- an oversized oval seat backed with radiating spindles -- was a curious blend of East and West, its back evoking the iconic Windsor chair while its base was broad enough for sitting cross-legged and low enough to use on a tatami-mat floor. Designed by Katsuhei Toyoguchi for his personal use, the chair is still produced by the Yamagata Prefecture furniture maker Tendo.

Founded in 1940, this was one of the first companies to embrace design as well as mass production. Some of Tendo's techniques were developed in tandem with the Japanese government's Industrial Arts Research Institute. Established in 1928, this agency was tasked with finding ways to convert local crafts into lucrative exports. In addition to engineering technical breakthroughs, the organization imported advisers from Europe, including the German architect Bruno Taut and the French interiors specialist Charlotte Perriand.

Perriand visited various workshops, guided by Sori Yanagi, who went on to become one of Japan's most important designers and whose father Soetsu Yanagi founded the mingei folk arts movement in the late 1920s. Incorporating the artisan's sensibility, Perriand then created chairs and other furnishings as examples. Marrying their contemporary design with bamboo, rattan and other traditional Japanese materials was one way to achieve this goal. 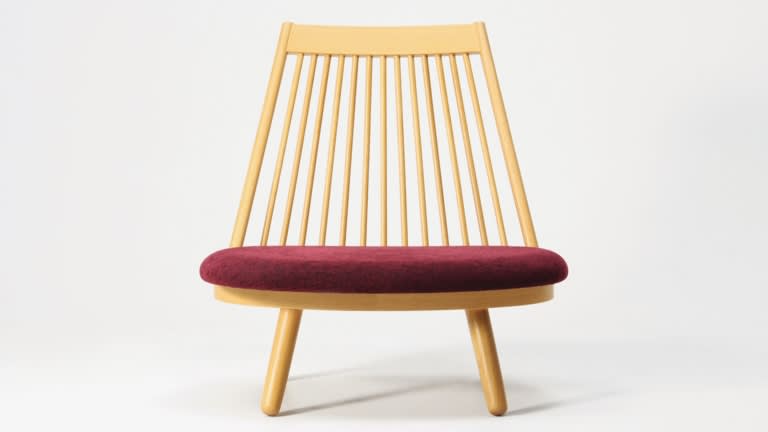 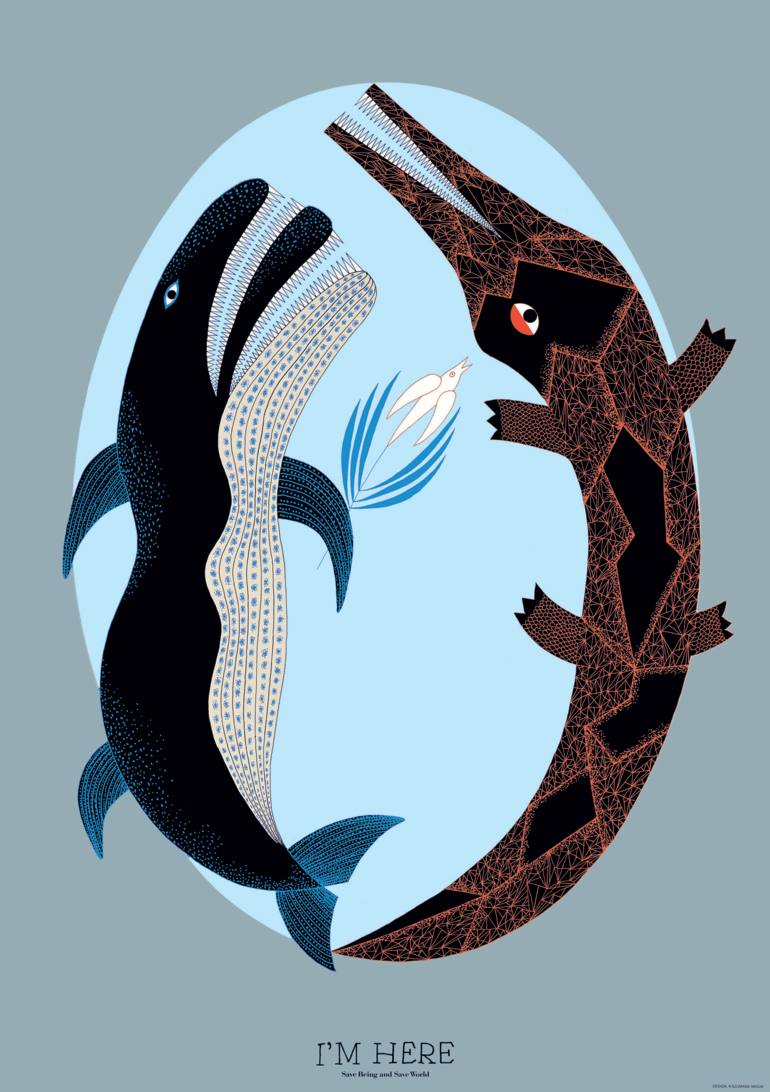 Top: Created in 1963 by designer Katsuhei Toyoguchi, the Spoke Chair is still produced by the Yamagata Prefecture furniture company Tendo. (Courtesy of Tendo) Bottom: An abrupt departure from the geometric schemes favored by graphic designer Kazumasa Nagai until the late 1980s, the “I’m Here” poster series was an emotional plea for environmental awareness. (Courtesy of Kazumasa Nagai)

Unsurprisingly, Japan's nascent design movement was halted during World War II as factories countrywide were enlisted by the military. But the ending of the war was followed by its rapid resurgence. For some companies, Japan's recovery was a chance for a fresh start. Others, such as Sony and Honda, were founded in that period. With the country in shambles, the need for consumer goods was rampant. Among the most voracious customers, however, were the U.S. occupation forces.

In addition to constructing 20,000 homes for army officials and their families, furniture, electrical appliances and other household items had to be fabricated to American standards. This gave Japanese manufacturers a crash course in American design and acquainted local citizens with the carefree American lifestyle characterized by convenience and expedience. By the mid-1950s, the acquisition of the "three holy treasures" -- a black and white TV set, washing machine and refrigerator -- had changed the cadence of Japan's daily life dramatically.

As the Japanese economy strengthened, popular taste broadened and America's impact on Japan's design culture was supplanted by that of other countries, such as Denmark and Finland. Increased contact with the West, however, came with complexity. To counteract criticism lobbed at Japanese products deemed too imitative, Japan's Ministry of International Trade and Industry launched the Good Design program in 1957. To promote innovation and originality, it singled out the designated products with awards. Early recipients included Toshiba's electric rice cooker and an oscillating fan by Fuji Electric. 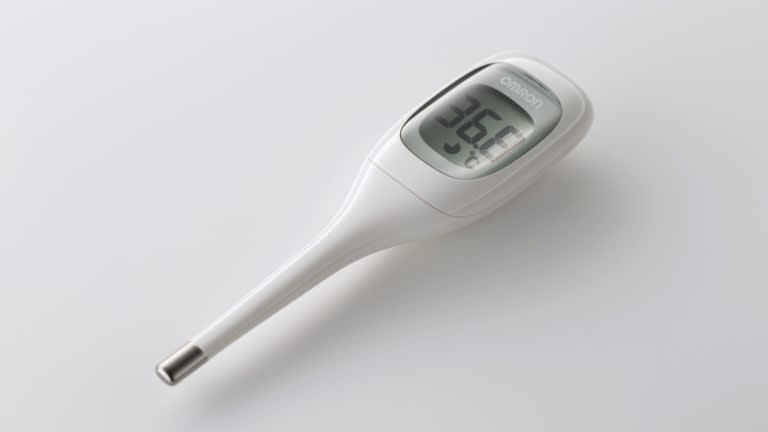 Top: Launched in 2013, the Omron electronic thermometer designed by Fumie Shibata of Design Studio S has a large, easy-to-read display and sits comfortably under the arm. (Courtesy of Takumi Ota) Bottom: Created by graphic designer Kenji Itoh, the logo for the Canon camera company figures prominently in the poster Itoh designed in 1956. (Courtesy of Itoh Kenji Design Studio)

While individual awards programs highlighted select products, it was the 1964 Tokyo Olympics that drew attention to Japan as a whole. More than an athletic competition, the event marked the country's return to the international economic arena. In preparation, there were urban renewal projects to be undertaken, expressways to be built and high-speed "bullet trains" to be developed, not to mention the various needs for the event itself.

Under the aegis of the design critic Masaru Katsumi, the country readied itself with an ambitious, design-driven agenda. With its swooping, tensile roof, architect Kenzo Tange's Yoyogi National Gymnasium flexed Japan's technological muscles while pictograms authored by Katsumi and posters created by Yusaku Kamekura demonstrated its graphic design might. Setting new precedents, the former enabled visitors unfamiliar with Japanese to move freely around the athletic venues while the latter were among the first of their genre to capture the intensity of the moment with large photographs.

Though it could not compete with the impact of the Olympics, the 1970 Osaka Expo followed in close succession. Once again, design figured prominently in the planning of the event and its venue. But, perhaps more importantly, the fair heralded Japan's growing technological dominance. Japan went on to become a leading producer of automobiles as well as household electronics. The Sony Walkman portable cassette player, introduced in 1979, changed the way the world moved and paved the way for compact devices of all sorts -- an area in which Japan still excels. 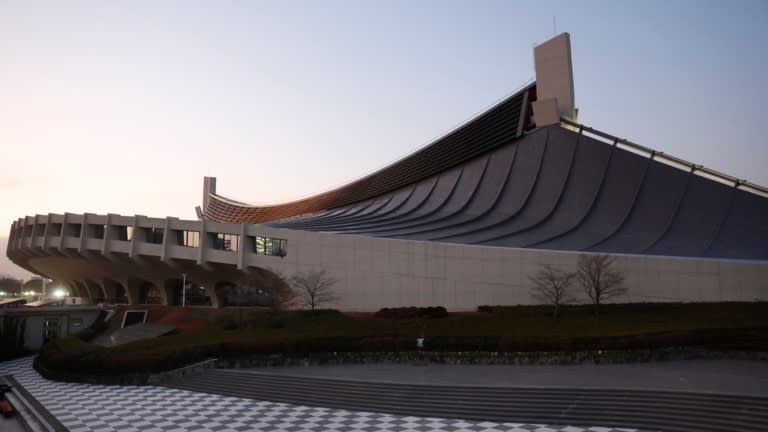 Top: Designed by Kenzo Tange, the Yoyogi National Gymnasium, which was built for the 1964 Tokyo Olympics, demonstrated Japan's emerging technological strength and remains an important landmark in a city where individual buildings rarely stand out. (AP) Bottom: Launched in 1979, the Sony Walkman revolutionized the way music is heard and paved the way for a wide range of portable listening devices. (Getty Images)

In the following decades, the Japanese economy continued to strengthen, reaching a pinnacle during the "bubble era" of the late 1980s and early 1990s. This growth stimulated consumer spending, which fed a robust appetite for imported wares and fashion brands. It was against this backdrop of conspicuous consumption that the Japanese retailer Muji emerged. It began with a line of 40 items, mainly foodstuffs. This included bags of broken shiitake mushrooms and canned fish parts created in response to the common but wasteful and costly practice of selling only blemish-free fruits and filleted fish. Concealed by its plain brown paper wrapping Muji merchandise promoted a simpler lifestyle based on need rather than want -- an ethos rooted in Japanese history.

In the coming years, as Muji began opening stores across Japan and then overseas, the company became known for its self-produced household goods and furnishings, many the anonymous work of the world's most talented designers. In addition to their modest prices Muji goods were distinguished by their clean forms, monochrome coloring and functionality. Unsurprisingly, the company developed a near cult following among design aficionados worldwide.

In part, the spread of Muji's popularity benefited from the growth of the internet -- a development which redesigned the entire Japanese design industry in numerous ways. In addition to proliferating information, the technology changed product development, fabrication methods, distribution networks and promotion campaigns. Due to the country's previously convoluted distribution system, manufacturers had limited contact with retailers and customers, let alone designers. Cutting out the middlemen not only yielded direct access to consumer feedback, it also fostered collaborations with designers, many of them fresh, young and internet-savvy. 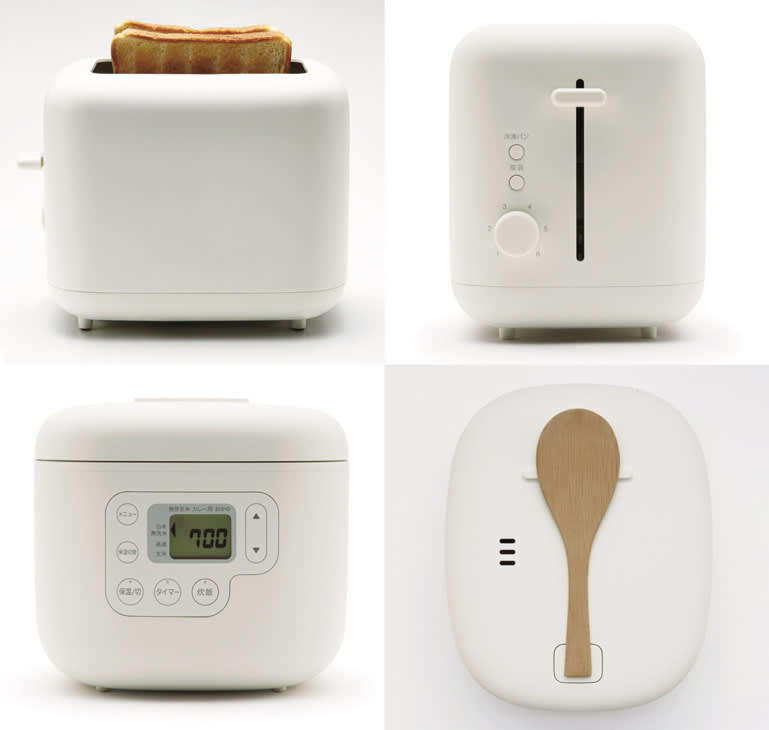 Defined by their clean lines, white color and minimal labeling, Muji's Pop-Up Toaster and Rice Cooker, which both debuted in 2014, stand out for the way they blend in (Courtesy of Ryohin Keikaku Co., Ltd.)

In the past, newly minted designers had few options but to accept in-house employment at large companies with strict product guidelines and little opportunity for personal expression or recognition. Yet for many, those positions offered important training. Fukasawa, one of Japan's best-known industrial designers, launched his career with an eight-year stint at Seiko Epson. Today, Fukasawa not only designs a broad range of products for clients around the globe, he also serves on the Muji advisory board and is the director of the Japan Folk Crafts Museum, founded by Soetsu Yanagi in 1936. Though Japan's post-bubble economic downturn eliminated many in-house jobs, the growth of the internet made going solo not only appealing but possible, even for young designers.

One was product designer Masanori Oji, who early in his career offered his promotional skills to certain factories to get his foot in the proverbial door. One of his early successes was Futagami, a metal-casting company which historically manufactured Buddhist ritual objects but needed to repurpose its technology. Contemporizing Futagami's forms and finishes, Oji created a series of trivets, paper weights and other daily use items which infused the company's aging product line with new life. Top: Introduced in 1983, Global knives are made in Tsubame-Sanjo, a traditional cutlery production center in Niigata Prefecture, by Yoshikin. (Courtesy of Yoshikin) Bottom: As elegant as it is functional, the lucano ladder designed by Chiaki Murata has been manufactured since 2009 by Hasegawa Kogyo, an industrial ladder manufacturer established in 1956. (Courtesy of Manabu Sato)

Given Japan's rich design history and array of benchmark products, it is surprising that the country has yet to build a designated design museum. In 2003, the fashion designer Issey Miyake published an essay, headlined "Time to create a design museum," in the Asahi Shimbun newspaper, urging Japan -- "a nation that can proudly claim its place as one of the world's treasure houses of design" -- to establish such an institution. Unfortunately, the world is still waiting.

Meanwhile, information and archival materials are diminishing. As flat-screen TVs become integrated with walls, touch panels mere projections on tables and smartphones much more than communication devices, the task of design may be shifting away from creating objects to orchestrating experiences. Now more than ever is a good time to look back and take stock of Japan's remarkable contributions across all areas of design.

Naomi Pollock, an American architect, is author of several books, including "Modern Japanese House" and "Made in Japan: 100 new products."