Global awareness of widespread theft is leading to recoveries 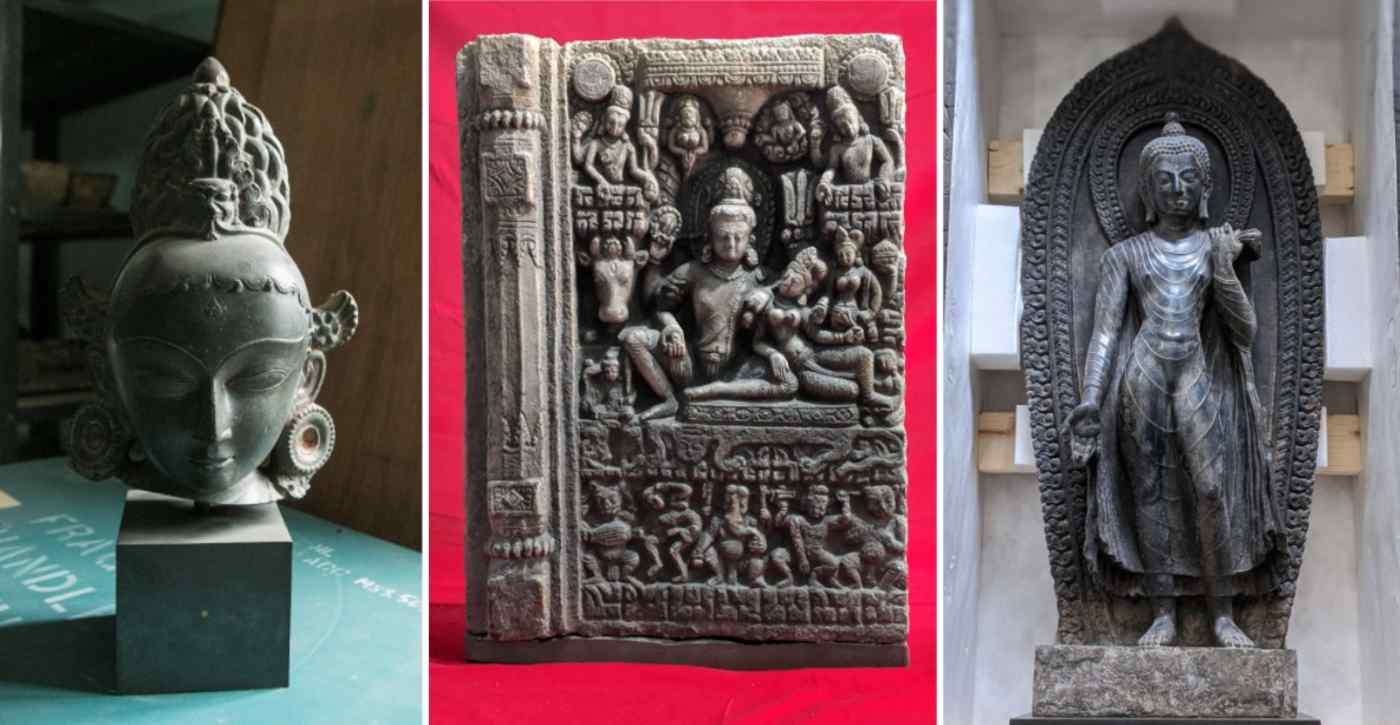 Nepalese artifacts that were repatriated after being stolen. From left: the head of a 12th-century statue of the Hindu goddess Saraswati, a 10th-century Uma Maheshwar-themed stone carving, and a stone statue of Buddha. (Courtesy of the National Museum of Nepal)
DEEPAK ADHIKARI, Contributing writerSeptember 1, 2021 08:00 JST | Nepal
CopyCopied

KATHMANDU -- The dilapidated two-story Narayan Temple sits amid a jumble of four-story buildings near Kathmandu's historic Patan Durbar Square. For generations of Hindu devotees, the shrine's deity -- a half-male and half-female figure of Lakshmi Narayan -- was the focus of their worship, particularly for pregnant women seeking its blessings to ease their labor pains.

But the androgynous 12th-century stone statue was stolen in 1984, shocking worshippers. Few efforts were made to search for the idol, amid rumors that powerful people had been involved in the systematic theft of precious idols. "We were shocked, but there wasn't much we could do," said local conservationist Dilendra Raj Shrestha. Almost a decade later, the locals installed a replica of the statue on the vacant pedestal.

Now, after years of effort to track and recover lost heritage items, the idol has been recovered and is in storage at the Patan Museum, a few blocks from the temple, waiting to be reinstalled. The sculpture, which had been sold by Sotheby's auction house in New York in 1990, was returned by the Dallas Museum of Arts, where it was on loan from a private collector, after an investigation by the U.S. FBI and the American artist Joy Lynn Davis, who had created a painting of Lakshmi Narayan during an art residency in Kathmandu.

The 70 kg stone statue arrived back in Kathmandu in April, followed by three idols of the Buddha and the Hindu deities Ganesh and Apsara, repatriated from New York in July. Several other artifacts and statues have also been returned with the support of foreign heritage activists and governments. But thousands of religious idols with historical significance are still missing.

Most had stood in places of worship or at heritage sites for hundreds of years, unguarded in open temples where thieves found it easy to locate and remove them. Even when specific artifacts were found by campaigners in American and European museums or art galleries it was often difficult to prove their provenance because of a lack of documentation. 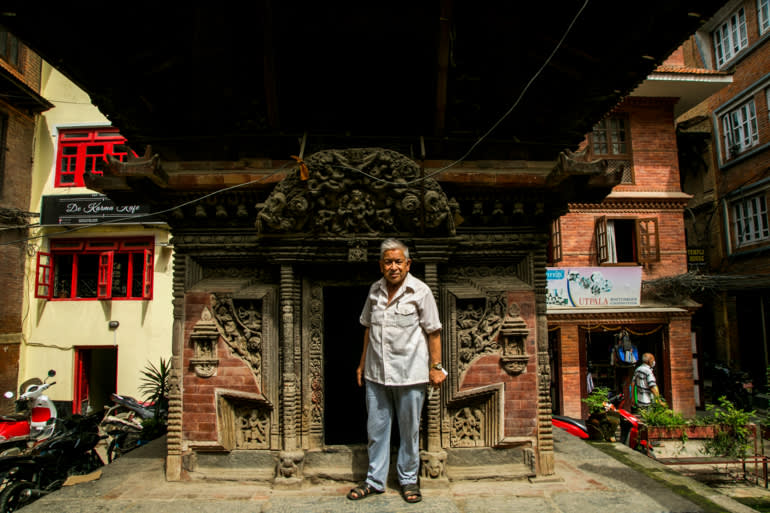 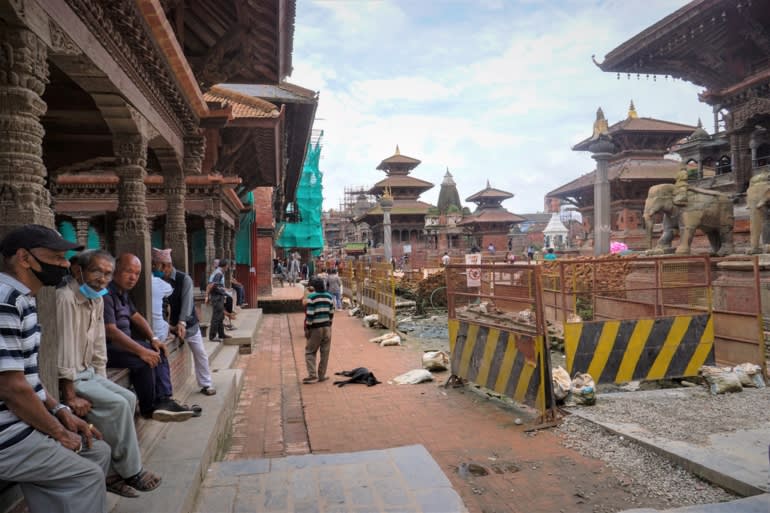 Top: Bhairaja Shrestha, a 78-year-old devotee of the Hindu deity Lakshmi Narayan, stands in front of a stone carving that was returned to the Narayan Temple in Patan, in Nepal's Kathmandu Valley, in April after being stolen in 1984. Bottom: A view of Patan Darbar Square. Several temples are being rebuilt following a devastating earthquake in 2015. (Photos by Sunil Pradhan)

"When evidence was required to claim the statue of Lakshmi Narayan, we searched for a police report, but there wasn't any," said Dilendra Raj Shrestha, who along with fellow activists recently set up the nonprofit Nepal Heritage Recovery Campaign.

"When thefts first occurred in Nepal in the 1950s, 1960s and 1970s, camera ownership in the country was rare, so it is often difficult to locate photographs of statues and other cultural heritage objects in their original locations," said Davis, who traced the Lakshmi Narayan statue to Dallas in 2015, but found repatriation efforts hampered by political instability in Nepal, and a devastating earthquake.

The first steps toward finding the missing artifacts were taken by Nepalese art historian Lain Singh Bangdel in 1989 in his painstakingly documented book "Stolen Images of Nepal" -- an academic approach continued by his daughter, Dina Bangdel, a professor of art history at Virginia Commonwealth University in Qatar, until her death in 2017. 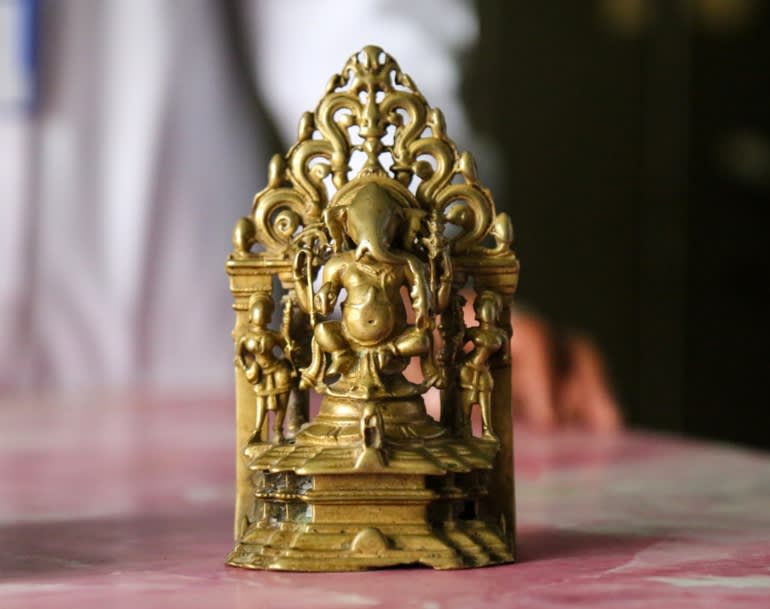 A gold seated statue of the Hindu god Ganesh, believed to be from the 15th or 16th century, at the National Museum. It was returned to Nepal in mid-July after New York police seized it and other stolen artifacts. (Courtesy of the National Museum of Nepal)

By the late 1990s, their work had begun to bear fruit. Based on details from the book, an American collector returned four idols, including a ninth-century Buddha, a 10th-century Vishnu and a mutilated head of Saraswati, all stolen from the Kathmandu Valley, and a 14th-century idol of Surya from the ancient town of Panauti on the outskirts of Kathmandu.

In 2000, the Berlin Museum of Indian Art returned an 800-year-old sculpture of Uma Maheshwar. The stone carving was stolen from Dhulikhel, on the valley's edge, in 1982. More recent repatriations include the April 2018 return of a Buddha statue and a figure of Uma Maheshwar from the Metropolitan Museum of Art in New York.

As the campaign to recover lost statues gathers pace, heritage activists have taken to social media platforms to broadcast their findings, and government officials are increasingly active in gathering evidence and coordinating with Nepali embassies abroad. In early June, the auctioneer Bonhams canceled the sale in Paris of five centuries-old religious artifacts. Sweta Gyanu Baniya, a Nepalese scholar in the U.S., used Twitter to post claims that a gilt-copper necklace from Kathmandu's Taleju Temple was located in the Art Institute of Chicago. 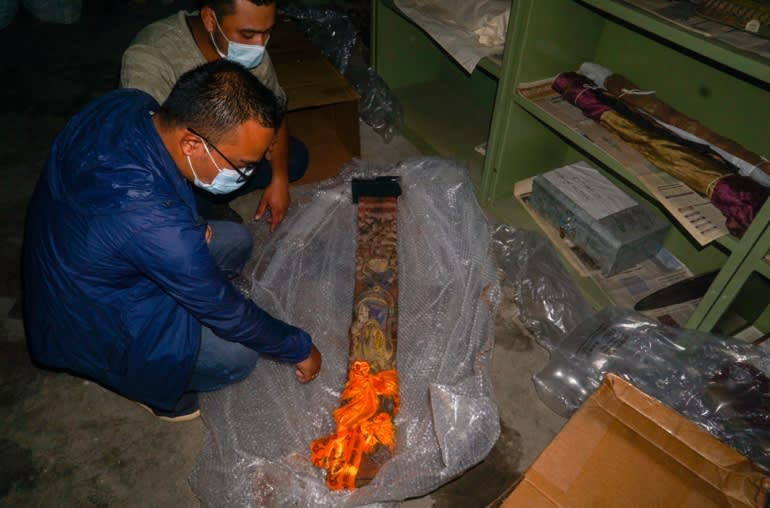 National Museum officials Subash Krishna Dangol and Sachin Shrestha examine a wooden beam depicting Apsara. The 13th-century antiquity was among the items returned to Nepal in mid-July after being seized by police in New York. (Photo by Sunil Pradhan)

Suresh Saras Shrestha, an official at Nepal's Department of Archaeology, said foreign museums and art galleries were increasingly willing to return stolen artifacts on moral grounds. "There's growing awareness about the stolen artifacts both in Nepal and abroad," he said.

However, experts said repatriation is still challenging. Nepal recently published a database of 500 monuments but has yet to create an inventory of stolen items. Suresh Saras Shrestha said his office was hamstrung by lack of resources. "We don't have an inventory of the stolen statues. We cannot afford to buy the items if they are put up at auction," he said.

Erin Thompson, associate professor of art crime at the John Jay College of Criminal Justice at New York's City University, said the sheer scale of the thefts from Nepal complicates repatriation efforts. "A community wants its idol back -- but how are they supposed to find it among the hundreds of Western art collections that hold Nepali heritage?" she said. 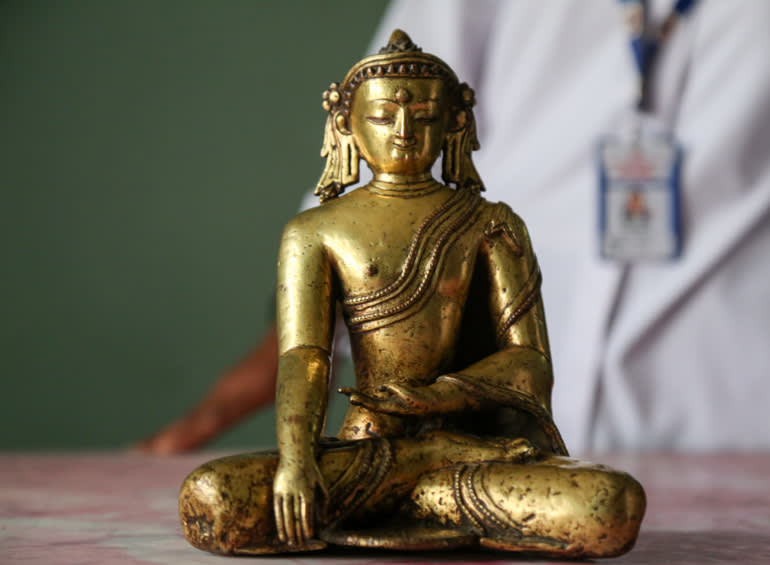 This gold statue of Buddha, believed to be from the 14th or 15th century, is one of the stolen items returned to Nepal after being seized in New York. (Courtesy of the National Museum of Nepal)

Thompson also sees the complacency of Western collectors as a major challenge. "They think they don't have any problems if they don't know anything bad about how the idols they own left Nepal. But knowing nothing just means they haven't asked the right questions -- because they are afraid of what they would find out," she said.

As stolen idols find their way home, local communities and authorities are facing a new problem: finding their places of origin and ensuring their safety after reinstallation. Dilendra Raj Shrestha, the conservationist, said the temple that will soon be home to Lakshmi Narayan was planning to install a CCTV camera, while other temples had installed metal bars to protect the idols.

There is also hope that a change of heart in the West may help to protect the artifacts by removing the incentive for theft. "Now there's less chance of our idols being stolen, because the buyers may feel ashamed of it," said Dilendra Raj Shrestha.