In Tokyo, public toilets are works of art TOKYO -- A project to transform public toilets in Tokyo's Shibuya district into art saw its latest addition this week, when one designed by Pritzker Prize-winning architect Tadao Ando opened in Jingudori Park.

The prominent, umbrella-like eaves capping the structure inspired its name Amayadori, or "shelter from the rain." The latticework is designed to let wind and light pass through seamlessly.

This is the seventh design completed in Shibuya under the Tokyo Toilet project run by the Nippon Foundation. Sixteen internationally renowned creators are participating in the initiative.

The idea is that the beauty of the structure would encourage visitors to be clean when doing their thing. With an army of professional inspectors making frequent visits to ensure the best user experience, the planners hope to change the image of public restrooms as dark, dirty, smelly and scary.

The first restroom, completed in August, came from another Pritzker-Prize winner -- Shigeru Ban. Located in Yoyogi Fukamachi Mini Park, the yellow, red and purple stalls have a transparent facade when open. But once the door is locked from the inside, the walls become opaque to provide privacy. 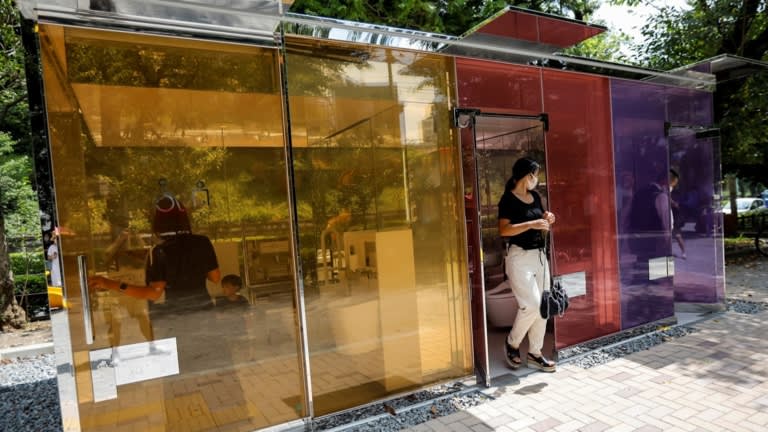 "There are two things we worry about when entering a public restroom, especially those located at a park," Ban explained on the project's website. "The first is cleanliness, and the second is whether anyone is inside. Using the latest technology, the exterior glass turns opaque when locked. This allows users to check the cleanliness and whether anyone is using the toilet from the outside."

It has a bonus function. At night, the facility lights up the park like a lantern.

"We want to provide public restrooms that are not only accessible to all people, but also a pleasant experience for anyone to use," said a project manager at the Nippon Foundation.

The plan is to install 17 of the artistic public restrooms by summer 2021. The structures are being built by construction company Daiwa House with Toto providing the cutting-edge toilets.

Maintenance will be a collaboration between the Nippon Foundation, the Shibuya government and the Shibuya City Tourism Association.

"Wonderwall" is a toilet in Ebisu Park designed by architect Masamichi Katayama, whose works include the Uniqlo global flagship stores in New York, Paris and Ginza. 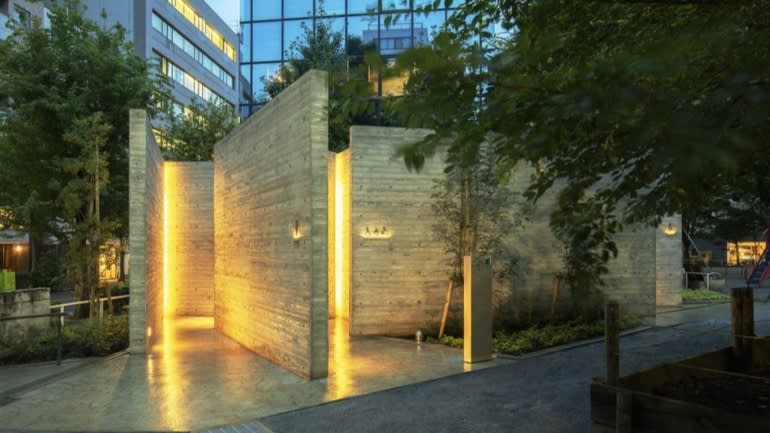 The public toilet inside Ebisu Park by Masamichi Katayama is made from 15 slabs of concrete. (Photo courtesy of Nippon Foundation)

Made from 15 slabs of concrete, it took inspiration from Neolithic times, when Japanese toilets were huts that stood over rivers. Users walk through the randomly combined slabs that lead to three different areas: toilets for men, women and everyone.

Comprised of three separately designed small cubicles, the toilet seeks to provide a safe and private space that envelopes all users. 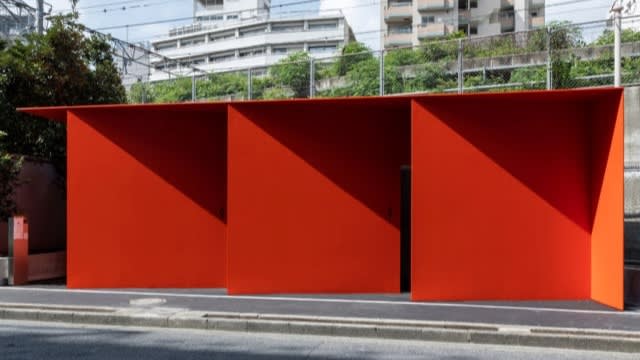 In a separate project, the Tokyo metropolitan government and Tokyo University of the Arts opened a so-called art toilet in Ueno Park on Monday. The walls are decorated with pandas, elephants and other animals in a homage to the nearby zoo.

The city recruited Tokyo University of the Arts in spring of last year to remodel a public restroom in the park in a way that reflects the cultured surroundings, which includes the National Museum of Western Art and the Tokyo Metropolitan Art Museum.

About 40 university students took part in the remodeling project. "I hope the restroom becomes another museum," said one graduate student.

The capital's Toshima Ward launched the "Toshima Public Toilet Project" in fiscal 2017 to add brightly colored artwork to restrooms in parks and playgrounds. Tokyo redesigned this public restroom in Ueno Park to reflect the museums in the area. (Photo by Seiya Tsuji)

The ongoing project has reached 24 locations so far, and the organizers also created a map so visitors can check out each work of art. Toshima aims to have the restrooms play a role in local tourism.

Japan has always been famous for its quirky innovative toilets, such as warm-water-squirting bidets, toilets with no tanks and Toto's Tornado Flush, which creates a powerful circulating whirlpool of water that cleans every part of the bowl.

But the coronavirus pandemic has given rise to new demand outside of its home market. Lixil saw sales of its shower toilets grow 60% year-on-year in the April-May period.

A lack of toilet paper at stores, as customers hoarded rolls, gave American consumers an opportunity to try the electric bidets. Many got hooked.

That trend was helped by news out of China that the coronavirus could spread through the air when toilets are flushed. Japanese toilets with lids that lift automatically when approached and that flush when users stand up are seen as a fit for this age.