Their performances carry messages against Hindu nationalism and gender oppression 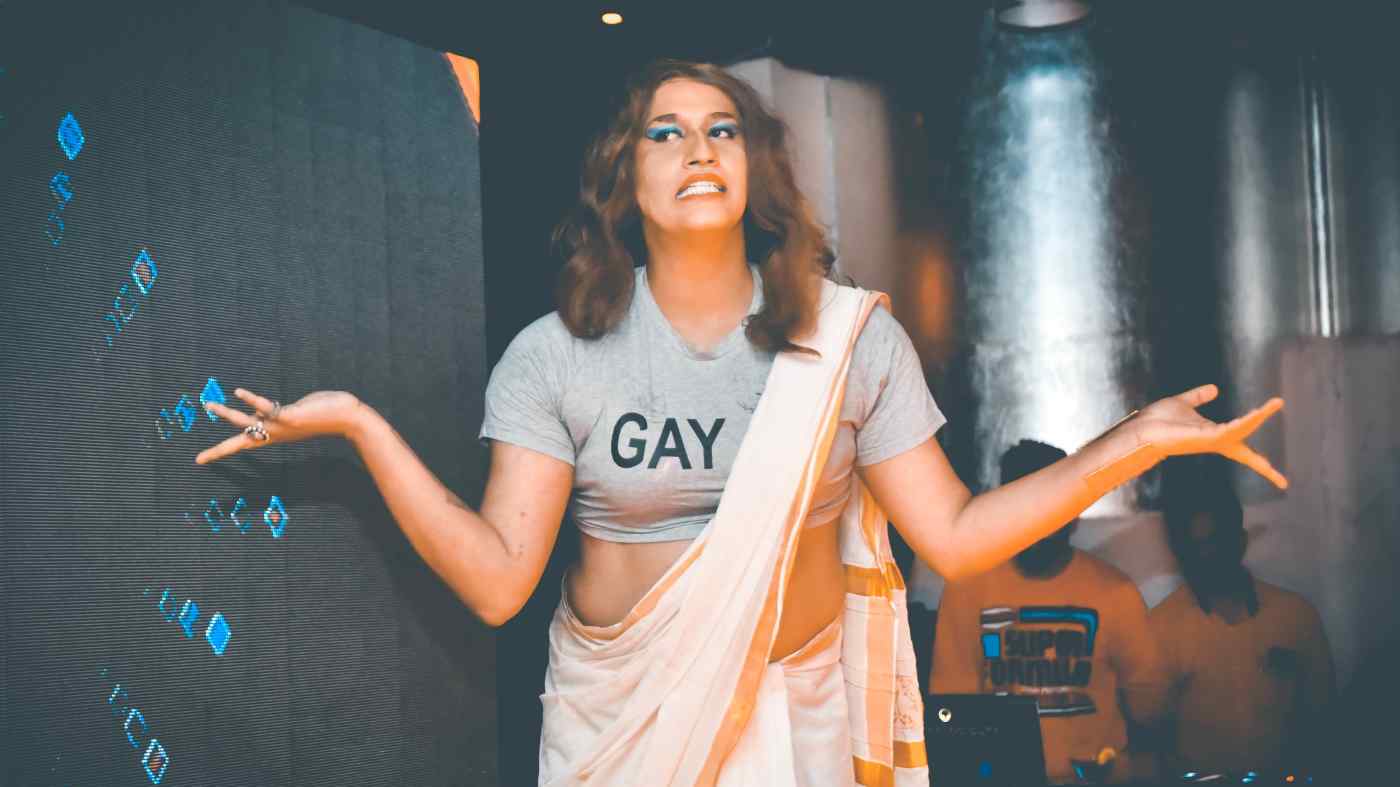 NEW DELHI -- Covering her face in a red gamchha, a piece of cloth used by daily wage workers in India to protect themselves from the tropical summer heat, drag queen S.A.S. sings sadly in the regional Bhojpuri language: "The train takes away my husband, let the city where the train takes him catch fire."

The song, where a wife remembers her husband who has gone far from their village to a big city in search of work, is a prelude to S.A.S.'s act about the distant workers who are now unemployed and traveled thousands of miles home after the COVID-19 lockdown in India cut short their jobs.

The act, originally performed on an Instagram live broadcast and devised out of anger at their abandonment by the government, "highlighted the plight of these workers, some of whom have been run over by trains and trucks and many of whom died of starvation," says engineer Patruni Chidananda Sastry, 27, who plays S.A.S. The initials stand for Suffocated. Art. Specimen., a name Sastry picked because he believes there are multiple personalities within him and each is striving to come out.

S.A.S., from the southern Indian city of Hyderabad, is a part of a new breed of politicized Indian drag queens who have emerged over the past six years, forcing uncomfortable conversations about issues including job losses, the rise of Hindu right-wing extremism and Islamophobia, as well as gender stereotypes and patriarchy.

"These drag artists have the capacity to steer discourse, incite new conversations and stir up a social movement," says U.S.-based performance artist Kareem Khubchandani, who specializes in drag and storytelling in South Asia. Engineer Patruni Chidananda Sastry, who performs in drag under the name S.A.S., is a part of a new breed of politicized Indian drag queens. (Screen grab from YouTube)

Generally, these artists perform in both gay and heterosexual upmarket clubs, queer literature festivals and open-air cultural spaces, but now they are using social media to connect to their audience during the lockdown.

Sporting flashy red lipstick, a blue top and multicolored scarf, Avatari Devi appeared on Instagram in mid-April with different sets of vegetables, including chilies, tomatoes and bottle gourds, either orange or green in color. In this sardonic monologue which lasted for a little over three minutes, Devi asked the audience to avoid eating green vegetables and start eating the orange or saffron ones instead. The saffron represented the Hindu right-wing and the green Muslims, and the act mocked Indians who blamed Muslims for the spread of COVID-19.

New Delhi-based animation and documentary filmmaker Saransh Sugandh, 35, who plays Devi, conceptualized the act after two Muslim vendors faced a social boycott in the northern Indian state of Uttar Pradesh. They explain: "It was a satirical take on ordinary citizens who accepted the propaganda against Muslims, whether egged on by the government or by a section of Hindu-right wingers." (Sugandh uses the pronoun "they" to reflect their nonbinary identity.) In December, Sugandh did a gutsy show where they called out the anti-Muslim policies of the ruling Hindu-nationalist Bharatiya Janata Party-led government.

Similarly, in one performance, liked by more than 10,000 people on YouTube, Ashley Tellis of Hyderabad reads out a satirical poem about wanting to have sex with Prime Minister Narendra Modi because of his "macho streak" for tolerating and even encouraging violence against Muslims. About 790 Muslims were killed in a riot in the western state of Gujarat in 2002 when Modi was chief minister there.

"For me, drag is political," says Tellis, 50, a freelance journalist. "There has to be a strong message or the act is a waste of time." He adds that his drag highlighted how Muslims continue to be victimized in Modi-led India. In the current political climate, when many cartoonists and stand-up comedians have faced intimidation by right-wingers for taking potshots at Modi, historian Saleem Kidwai calls these drag performances "acts of defiance" in India, a country with roughly 104 million LGBT-plus people which only decriminalized homosexuality two years ago.

"These drag artists are as relevant as other political and social activists in India," says queer rights activist Kidwai, who is co-editor of the book "Same-Sex Love in India." "They have realized that their struggles have to be linked with the struggles of other disenfranchised groups such as minorities, workers and women, and there is a need to make their art more meaningful in these fraught times."

These drag artists also carry the essence of the recent feminist movements in India, including Pink Chaddi and Gulabi Gang, which raised voices about repressive right-wing men and violence against women, respectively.

"Transgender performance has taught the community about the arresting powers of feminine movement -- the dress, the makeup and its ability to inspire collectivity and motivate survival," says Khubchandani, who is also an assistant professor in the theater, dance and performance studies department at Tufts University in the U.S. 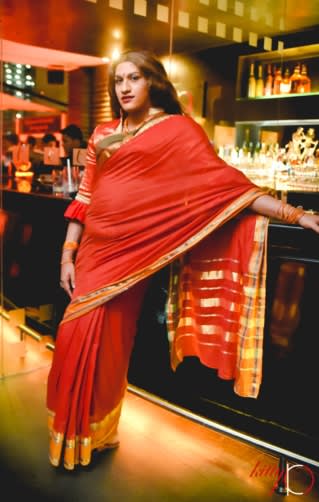 "I perform in a sari to break the gender stereotypes in this patriarchal world," says Mathew. (Courtesy of Alex Mathew)

These drag queens do not wear blonde wigs and high heels, aping their Western counterparts like RuPaul and Nina West. They wear Indian clothes to narrate stories rooted to their soil.

Alex Mathew, 31, who plays Maya the Drag Queen, appears on stage in a crisp white sari that matches the jasmine flowers tucked neatly in her bun, to address gender equality and transgender empowerment through adaptation of folk tales.

For Mathew's debut as Maya in 2014, he borrowed a sari and a blouse from his mother. "That day, my mother gave away the sari reluctantly because she couldn't approve of my drag identity," says Mathew, an artist manager who lives in the southern city of Bangalore. "Now she packs my suitcase whenever I step out of the city for performance. It took her three years to accept my drag identity and understand that I perform in a sari to break the gender stereotypes in this patriarchal world."

Patruni Chidananda Sastry says that S.A.S. uses her attire as political tool. In a January performance titled "RED LIGHT," protesting against India's new discriminatory citizenship law, S.A.S. took off her red and green silk scarf, her multi-colored embroidered Jodhpuri jacket and her radiant Rajasthani ghagra (long skirt) one by one, to indicate that she, as a citizen, was breaking the shackles.

There are layers of gender-play in the costume of Sugandh, an upper-caste Hindu, as Avatari Devi. They don the traditional lehenga (long skirt) and choli (blouse), which resemble the attire of the marginalized lower-caste male folk artists called laundas, who perform as women. "My performance is a nod to the launda tradition," they say. "I belong to the eastern Indian state of Bihar, a region where they come from as well. But my economic and social privileges have given me greater agency over my body and sexuality and allowed me to be more politically outspoken than the laundas."

But, says Sugandh, the real challenge is to sustain the interest of the elite audience in performances which ask uncomfortable questions about the marginalization of others. Tellis adds that most people look for frivolous content in drag so there is "limited space" for political acts.

Undeterred by the challenges, S.A.S. aims to perform in places of worship which often discriminate against transgender people. "This is the barrier that I want to break now," she says.