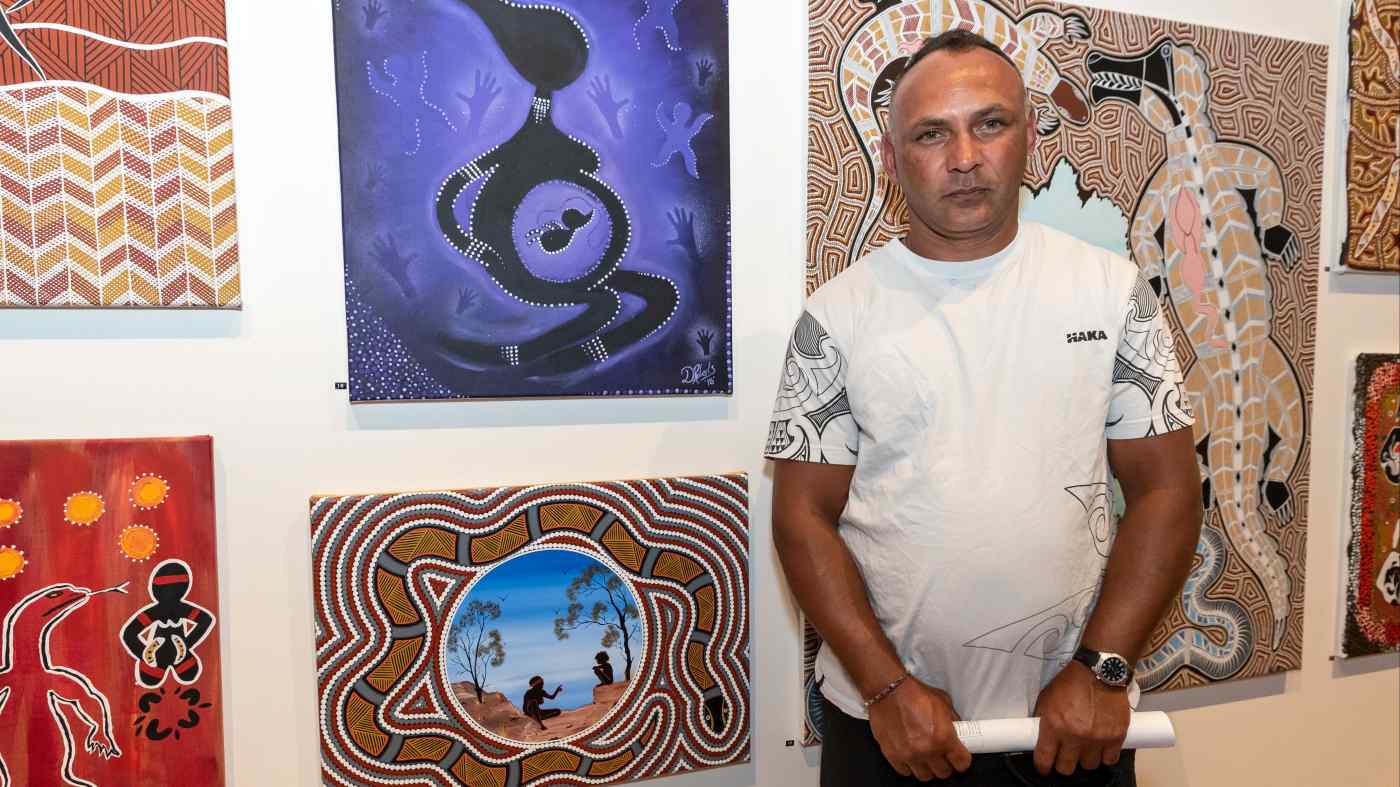 MELBOURNE -- Graham Gilbert will soon spend around four weeks in a prison in suburban Melbourne. Gilbert, who grew up in rural New South Wales and is a member of the Australian Aboriginal Wiradjuri group, spent much of his adult life in the criminal justice system. But when he returns to prison this time, it will be entirely voluntary.

Gilbert, along with three other artists, also former prisoners, has been commissioned to paint a mural measuring nearly 7 meters. All are participants in a program run by The Torch, a nonprofit organization that supports current and former indigenous offenders to develop their artistic skills and get their lives back on track. It is just one of the opportunities Gilbert has gained through the program, which he joined several years ago while still in jail.

"I've been out for a while now," said Gilbert, a colorblind artist whose paintings feature a range of native Australian animals and reflect a strong connection to the land. "There's still a few obstacles, but nothing to do with the law -- except for painting the murals."

The state government-backed program is now operating in 15 prisons in Victoria as well as the outside community. It aims to encourage former inmates to transition away from the justice system by using art to explore their cultural identity and participate more fully in society. With its distinctive symbols and dot patterns, striking colors and deep cultural roots, contemporary Aboriginal art has gained a wide following, both international and domestic, in the last four decades.

That interest is reflected in the large numbers of people attending annual indigenous art festivals across the country and the climbing prices for the work of top artists. While detailed data on the overall sale of Aboriginal art is not available, one event, the Darwin Aboriginal Art Fair, alone generated $2.8 million in revenue in 2018. 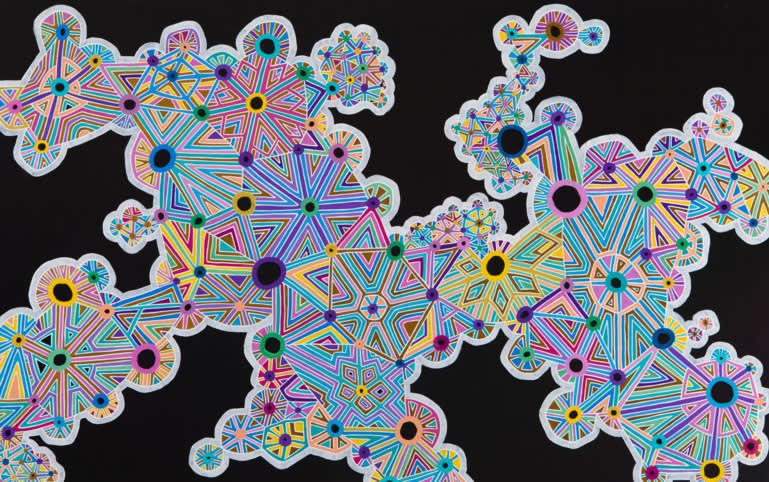 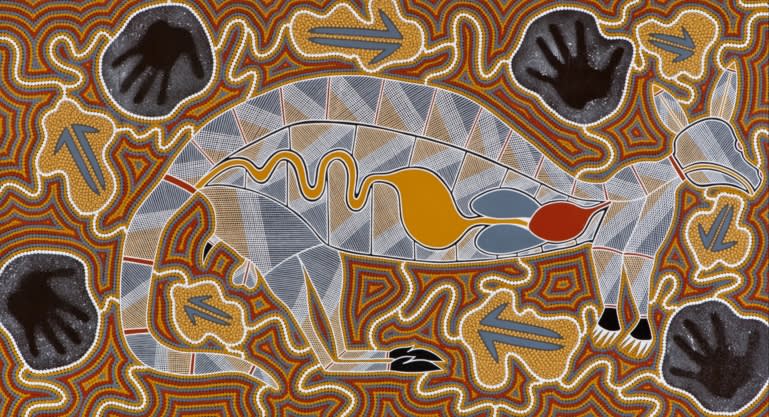 Commercial success is only part of the story behind The Torch, which was established in response to growing concern about the vast overrepresentation of Aboriginal and Torres Strait Islanders in the criminal justice system. Indigenous people make up 28% of Australia's prison population, although they account for only around 3% of the total population.

Such statistics highlight the impact of an organization such as The Torch, which tries to help participants gain financial independence through their art. "The success of the program has been that it's delivered by Aboriginal and Torres Strait Islander people," said Kent Morris, chief executive of The Torch and a member of the indigenous Barkindji group. "It's been designed, developed and built on indigenous knowledge and support systems and the men and women who the program is for were involved in the development and creation of the program from day one." So far, The Torch program has produced a number of recognized artists. Sean Miller, a former participant who now works with prisoners in the Torch program, has created ceramics that draw on his Kamilaroi heritage and which have been purchased by the National Gallery of Victoria, Australia's oldest public art museum. Other artists in the program have sold their works to galleries, organizations and private collectors. Artwork by Jeffrey Jackson, a member of the Mutti Mutti group, was recently featured on the exterior of a Melbourne tram.

A selection of works by The Torch artists is being displayed as part of the "Dhumbadha Munga: Talking Knowledge" exhibition at the Metro Gallery in Melbourne, running from Oct. 10 to 26. Among them is a series of paintings by Veronica Mungaloon Hudson of a burning landscape, recalling a traditional indigenous method of harnessing fire to manage the environment. There are also paintings by Jeffrey Jackson depicting the colors and patterns of the eroding landscape at Lake Mungo, a dry lake where the earliest modern human remains in Australia were found. A piece by the artist known as "Marbukk" features the ground-dwelling Australian bird, the Mallee Fowl, beside a bright pink lake. Events such as the annual Darwin art fair are normally positive for Aboriginal artists and communities, with proceeds directly flowing back to the artists and participating art centers. But there are also reports of unethical practices in the broader industry, including the sale of fake art by dealers looking to capitalize on the cultural cache of Aboriginal art.

A 2018 federal parliamentary inquiry into the prevalence of inauthentic indigenous art and crafts revealed that 80% of Aboriginal art souvenirs sold in Australia were imitation products. The report also found that there was a widespread lack of knowledge about indigenous cultures among nonindigenous Australians and that "most have difficulty in distinguishing between authentic and inauthentic First Nations art and crafts." 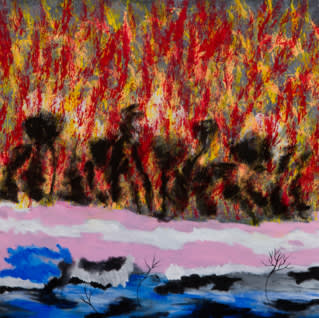 For many, the dot painting style associated with the Papunya art movement in central Australia is perhaps the most recognizable form. But contemporary Aboriginal art is incredibly diverse, reflecting the multiplicity of languages, clan groups, cultural beliefs and practices across Australia.

Aboriginal people have always documented their lands and culture in varied ways, said Paola Balla, an artist, curator and researcher from the Wemba-Wemba and Gunditjmara groups. "We have a really diverse practice in Victoria. Much of [it] is very hidden," she said. "Aboriginal artists from Victoria have to really fight to have our traditional mark-making, our culture and our history recognized and celebrated."

The remaking of possum-skin cloaks, distinctive shields and basket weaving as well as painting are among the skills prevalent in the local Aboriginal artistic community, according to Balla. "In the city, you're seeing young women who are making work that's very contemporary, very political, and restating who they are," she said. "Then there are 'elders' out in the regional areas who really don't get the same exposure for their art practice and their weaving skills." The artists involved in The Torch are not only finding economic opportunity and cultural expression, but also drawing attention to key issues of social justice. The ongoing effects of colonization, dispossession and discrimination, and the intergenerational trauma caused by past government policies such as the removal of Aboriginal children from their families, help explain the high Aboriginal rates of imprisonment.

"There are so many reports and recommendations which have sat on shelves and [which] governments have failed to implement -- and that's really contributing to what we see as a crisis in overrepresentation in Australia," said Shahleena Musk, a Larrakia woman and a senior lawyer with the Human Rights Law Center, based in Melbourne.

Musk said repealing mandatory sentencing laws and punitive bail conditions, and the need to genuinely pursue diversionary options and address the causes of criminal behavior, are key steps. Justice advocates in Australia are united in calling on the government to raise the age of criminal responsibility from 10 years old to 14 -- the most common minimum age internationally. "Raise the age and you're going to have less young kids, particularly vulnerable Aboriginal kids, being swept up and harmed by the system," said Musk.

For Morris, art has an important role to play in creating more public awareness around the experiences of Aboriginal people. "It's a forum to raise issues that are difficult to address, but [come to the fore] through this beautiful process of art and culture and sharing and expressing," he said. "One of the key tenets of the program is to learn your culture, express your culture and share it. That brings people on board."

A selection of works by The Torch artists is being displayed as part of the "Dhumbadha Munga: Talking Knowledge" exhibition at the Metro Gallery in Melbourne, running from Oct. 10 to 26.