Marjinal, one of Indonesia's most famous punk rock bands, is on tour at Soundmaker Studio in Penang, Malaysia. (Photo by Cole Yew)
Arts

JAKARTA -- In the Indonesian capital there are people toting guitars, singing and playing music on almost every street corner. The archipelago has a strong popular music history, and has nurtured talented groups in all sorts of genres, from hip-hop to heavy metal, and from punk rock to jazz.

But many musicians fear that their art is now under threat -- a draft bill designed to control the industry in this Muslim-majority country may end up strangling it.

The proposal has shocked musicians and music fans in Indonesia, given that even the country's widespread and popular heavy metal and punk underground communities -- which in the West traditionally support anti-establishment ideas -- have recently come under Islamic influence.

Movements such as the Islamic metalheads of Salam Satu Jari (One Finger Salute -- inspired by the "oneness" of Allah) and Punk Muslim demonstrate how some Indonesian musicians have adapted the global tropes of popular music genres to their own Islamic identities, thus complying with the nation's collective shift toward Islamist values.

This reflects the Islamization of much of mainstream Indonesian life, reflected in President Joko Widodo's choice of Ma'ruf Amin, an Islamic cleric, as his running mate in a presidential election due in April. Widodo, a progressive once hailed as the country's "heavy metal" president, faces strong competition from Prabowo Subianto, a conservative former general (and son-in-law of Suharto, a former dictator) who lost to Widodo in the last election in 2014. If the RUU Permusikan (Draft Bill on Music, published last August) becomes law, most foreign-influenced music and any provocative lyrics will be criminalized, and the performance of non-traditional Indonesian music will be banned across the archipelago.

"The Draft Bill on Music is dangerous for the future of both the Indonesian music scene and democracy," said Hikmawan Saefullah, an academic from Bandung. Saefullah played guitar in the hardcore punk band Alone at Last until 2013, and is now researching the intersections between the underground music scene and Islam in post-authoritarian Indonesia.

The draft bill, produced by Indonesian parliament's Commission X of the House of Representatives, which oversees issues related to sport, history and education, has the stated aim of protecting the music industry from foreign competition.

"But the reality is far from that: the bill is conspicuously elitist, hierarchical, heavily bureaucratic, and potentially repressive and exploitative toward musicians," Saefullah told the Nikkei Asian Review. Ironically, a key promoter of the draft bill is Anang Hermansyah, a former pop-rock singer who is now a member of Commission X.

"The forces hostile to the incumbent president, aware of his strong support among independent musicians, are trying to limit the latter's influence on the public in the months before the election," said Professor Jeremy Wallach of Bowling Green State University in the U.S. state of Ohio, who was among the first anthropologists to study Indonesian popular music and its newborn Western-derived styles in the mid-1990s. "They are doing so under the guise of a bill that supposedly fights commercial piracy and safeguards public morals, but would really deal a death blow to Indonesia's musical ecosystem," Wallach said.

Not long after news of the draft legislation emerged, a group of 262 musicians formed the National Coalition to Reject the Draft Bill on Music. Singer Danilla Riyadi launched an online petition claiming that the draft contains at least 19 provisions that suppress the integrity and freedom of Indonesian musicians. Article 5 is particularly controversial: It states that "musicians are forbidden to promote violence and lawbreaking to the public, create pornographic content, provoke inter-community conflict, blaspheme, adopt negative influences from foreign culture and insult others."

"This elastic law is very dangerous, and could be the gateway for certain people -- those in power, or whoever else -- to persecute creative processes that they do not like," Riyadi said in the petition, which has attracted more than 300,000 signatures and is now supported by more than 700 musicians. 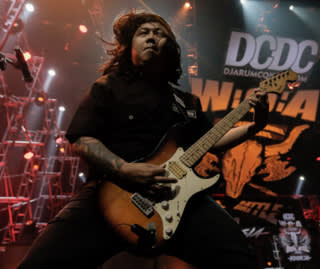 The draft bill is most feared by local groups who play Western-derived music -- particularly rock and other contemporary genres. "If the bill passes, Indonesian musicians will continue doing what they always have, because sometimes music is an expression of resistance," said Dimas Bramantyo, a guitarist in Valerian, a Surabaya-based heavy metal band, who organized a protest forum in his city. "The main difference will be that the wild stage antics that some bands can get away with these days will get them immediately arrested," Bramantyo said.

Bramantyo's concerns are shared by other prominent Indonesian artists. "It will be absolutely grim if this bill is passed. Music has always been an indispensable part of Indonesian popular culture and traditions," said Kartika Jahja, a singer in Tika and the Dissidents. Jahja is also a gender and sexuality activist who was included in a 2016 global list of inspirational and influential women produced by the BBC, in the U.K.

"Music has been one of the biggest agitators of various sociopolitical movements in Indonesia, and it has been used as an effective medium for education on various issues," said Jahja. "To limit musical expression in Indonesia is to kill an essential part of our identity as a culture and a nation." Kartika Jahja, center, speaks during a meeting in Jakarta. (Courtesy of National Coalition to Reject the Draft Bill on Music)

The bill could reach way beyond musicians focusing on Western genres, however. For example, it would directly confront the wildly popular dangdut music of Indonesia's eastern islands, which often features scantily-clad female singers; and it would apply tough provisions including a requirement that all musicians register with a state agency and undergo a "competency test."

"Passing the test gets a certificate issued by a government body called the Indonesian Institute for Music Profession Certification," said Saefullah. "It is formed by pop musicians affiliated with the Indonesian Association for Artists, Composers, and Musicians, [which] has close links with powerful elites in the state bureaucracy. They include... Hermansyah, and the former general of the Special Forces Command and the State Intelligence Agency, A. M. Hendropriyono."

The draft bill also stipulates that all music organizers and events must be regulated through government-issued permits; that music distributors must acquire registered business permits and use only the Indonesian language on their labels; and that music containing "negative foreign influences" that do not comply with Indonesia's religious values and national culture are prohibited.

"We [the coalition against the bill] divided ourselves into several divisions: research and legal, communication strategies, consolidation etc.," said Jahja. "Some of our findings reflect that this bill is unconstitutional... and that 80% of the content is highly problematic, not just the articles that limit freedom of expression."

The coalition met recently with Hermansyah, questioning the commission's failure to consult more broadly. Reinforcing his role as a Commission X member, Hermansyah told CNN Indonesia that the draft bill contained many positive changes that would benefit the industry. "The hopes of artists are many; professional musicians in other regions, like in eastern Indonesia, are hoping that the profession can sustain their livelihoods," he said. "That's why we need to sit down together with cool heads and discuss."

For many Indonesian musicians, however, further discussions are not enough. "You shouldn't stop people from expressing their music the way they choose to express it," said Jahja. "This is why we will continue to work to stop [the law] from being passed."