JAKARTA -- Idang Rasjidi sits alone in the middle of the night, having been driven from his recording studio by one of the frequent and ferocious rainstorms in his adopted hometown of Bogor. Although he describes himself as "tired," the 67-year-old Idang is still a driving force in the infectious beat of jazz in Indonesia.

I'm nothing really, not a very good player," said the Indonesian pianist, producer and teacher, who sometimes uses a wheelchair. "If I'm still wanted, it's for this spirit I carry. Because jazz is in my blood and I do everything for jazz."

This passion led Idang to rebel as a teenager against his strict father, a war hero and founding officer in Indonesia's Air Force, after he played his first professional gig at 14. Since then, he has encouraged up-and-coming jazz players through his Idang Rasjidi Syndicate band, his Goong record label and the jazz festivals he helped establish in Jakarta and Bogor.

In February he launched an Indonesian Jazz Channel on YouTube. The first video features one of his compositions and arrangements for a 14-year-old singer named Marsha, who had traveled a full day by train from East Java. In producing an album for her, Idang said, "I paid for everything, no problem, just like we try to help the musicians now because of the pandemic."

"Idang has strongly affected the creativity of jazz musicians in Indonesia as an informal lecturer providing many opportunities for young people and as a messenger traveling the country at his own expense," said leading local jazz guitarist Agam Hamzah.

He has succeeded in making Indonesia one of Asia's most vibrant jazz scenes. There are up to 40 annual jazz festivals in the country, led by the three-day Java Jazz Festival in Jakarta, which normally attracts around 100,000 people in March and is considered the biggest jazz festival in the Southern Hemisphere.

Idang has been championing jazz since the 1980s, bringing its sounds to even remote kampongs (villages). "Sometimes I'd just go by myself on a motorbike, with a very simple sound system, playing on toy keyboards. There were times the villagers would pay me with chickens and durians," Idang said.

One time when his car broke down in rural Java, some local boys recognized him. "They [had seen] me on television, and pushed the car all the way to their kampong. Then they listened to a song from Herbie Hancock. They told me they didn't understand the music, didn't know its name, but that it was good to move their bodies." Herbie Hancock performs at the Java Jazz Festival in Jakarta in 2012. Idang once witnessed a Hancock song work its infectious magic on local youths who had never experienced jazz before.

After playing, he would often offer workshops on basic musical theory to villagers because he did not believe that "things like jazz are only for people in the big towns." He has been rewarded by the results. "So many amazing musicians have come to me, saying 'Uncle Idang, do you remember me from that workshop?'" Idang said. In one town in Sumatra, he left some jazz CDs and DVDs with "five or 10 kids in a garage, and now the jazz community numbers 5,000."

He initially nurtured the talents of child prodigy Joey Alexander, who now at 17 is emerging as a headliner in the U.S., Idang said. "I brought him to his first performance. Then, after he became famous, others claimed the same thing. It doesn't matter, I don't have anything to prove."

"There's definitely a mystique around Idang," says impresario and fellow pianist Evelyn Hii, the longtime proprietor of Kuala Lumpur's top jazz venue, No Black Tie. "There's no doubt of his influence as a teacher. Even two of his sons are among the finest of the new generation -- one a top bassist, the other a drummer." Idang onstage at the Java Jazz Festival in Jakarta in March 2019. (Getty Images)

Idang said he will never forget the first time he listened to records featuring Nat King Cole, Glenn Miller and Miles Davis -- precious items brought back from Europe by his father, who was training as an air force pilot there. "My father didn't know exactly what it was, but he loved the sound."

With his musical talent at the piano, Idang first tried playing Western classical composers such as Bach and Beethoven. He also mastered Javanese percussion instruments in gamelan performances and still makes traditional instruments in his spare time. But his first love is jazz. "This music is so honest, you cannot repeat it," he said. "Like Miles Davis put it, you always play what you feel and feel what you play."

Idang's family tried to discourage him from pursuing a career making such strange foreign sounds when his siblings were choosing to become professors and army officers. "I got to meet with all the presidents and politicians in our home," Idang recalled. "And I told them to learn jazz also, that it's a philosophy of living -- so that they can improvise when they have problems, and learn to listen to others instead of talking all the time." The self-taught Idang has applied the same lessons to his own life. "I've learned everything I know from music: how to make friends, how to appreciate life, how to be patient and not blame others." Idang spent some time in the U.S. in the late 1970s, catching performances by Davis, Hancock, Joe Zawinul, Keith Jarrett, and his all-time favorite, the lyrical keyboardist Ahmad Jamal. "One of my reasons for living was to see exactly how he would play [the] next year," he noted.

Idang looks forward to playing again at the Java Jazz Festival, which has been delayed this year because of the COVID-19 pandemic and will be held as a virtual concert in June. "I'm so lucky so many still want to see me, and old friends from overseas wait at the side of the stage."

He also looks forward to returning to small events that are closer to his heart and mission such as the Ngayojazz festival in Yogyakarta, which he has attended for 15 years. He describes it as a "most unique and emotional," event, at which "the villagers make all the food and take a month to build the stage that's right in front of a different kampong house each year." 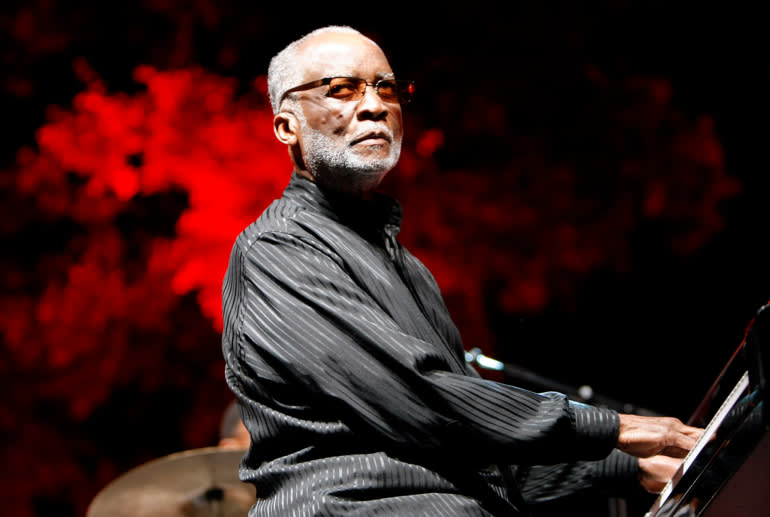 Other local favorite jazz festivals include the Jazz Gunung (Mountain Jazz) event, staged on the side of Mt. Bromo, an active volcano in East Java, which is billed as the "world's highest altitude" festival, and the Prambanan International Jazz Festival held amid the priceless ruins of the famed Prambanan Temple near Yogyakarta.

Malaysia's Hii believes that Indonesia has several advantages in developing such a vibrant jazz scene. "You've got so many millions of kids, most of them in poverty, so that they're motivated to practice all the time. And unlike here, where international acts don't bother to stop, and the authorities treat foreign musicians with suspicion, every great goes to Indonesia and all the big companies want to sponsor them. It's a point of national pride."

Idang is proud that Indonesian players can fuse jazz techniques with more traditional sounds and instruments as well as mainstream pop and even Brazilian samba. He explained that local jazz has benefited from the traditions of the many different islands in the Indonesian archipelago, each with their own rhythms and influences derived from India, Persia, China, Holland and Portugal.

Given such a musical legacy, Idang said: "It's easy to understand why these kids love music. I just have to give them a little knowledge and the courage to be brave, to give of themselves and just keep giving, at times to become fools."