JAKARTA -- Quickly establishing himself as a uniquely Indonesian creative export, artist-illustrator Kendra Ahimsa is building a loyal fan base that began in Japan’s independent music and art and design scene but has since spread to other parts of the world, all under the pseudonym Ardneks.

In July, Ahimsa launched Artist Attire, a merchandise line adorned with his illustrations, at Dmoarts gallery and The Stories creative space, both in Osaka. The brand is a collaborative effort between Ahimsa and a group of Japanese designers who, for now at least, choose to remain as anonymous collaborators and investors.

Ahimsa has also made waves in the U.S., creating posters and album covers for the major music festival Desert Daze and popular indie musicians such as Mac DeMarco, Warpaint, Moon Duo, Neon Indian and Homeshake.

The success of his merchandise sales and commission work has made him one of very few Indonesian artists who can live off their art. Among fans, the most sought-after item is the $60 bowling shirts adorned with his illustrations. His other merchandise includes his $20 prints, $70 pants and $30 multipurpose fabric. In indie music circles in the West, particularly in America, he has seen a recent surge in commissioned work for album covers and posters.

"It's a case of someone -- a band or their management -- seeing my work on one of their peers' posters or album covers and then getting in touch with me through Instagram. It's just been a constant thing that I find very surprising," Ahimsa said. 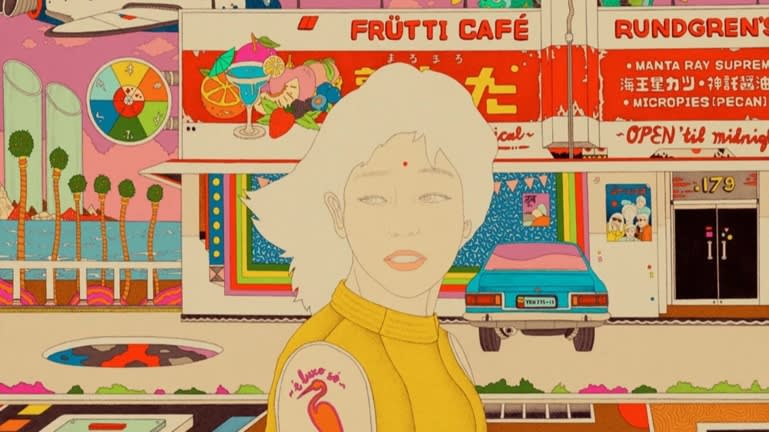 Japan, in particular, has welcomed Ahimsa with open arms, perhaps because of the obvious influence on his work of Tadanori Yokoo, a well-known Japanese graphic designer, illustrator, printmaker and painter born in 1936. However, the Ardneks brand is also influenced by the American psychedelic poster artist Wes Wilson and the German painter Mati Klarwein, whose work adorned many legendary album covers, including the jazz trumpeter Miles Davis' 1970 release "Bitches Brew" -- a favorite of Ahimsa.

The result is an explosive glow that immediately catches the eye through its color and detailed images, which Ahimsa refers to as "the trivial." Often, these reference favorite musicians or artists, or places and people he has known. In 2016, Ahimsa became the Grand Prix winner of the annual Unknown Asia Art Exchange competition in Osaka. It was Japan’s first exposure to the artist, then 27 years old, and the relationship bloomed rapidly.

Since then, he has created posters for the Japanese psychedelic rock bands Kikagaku Moyo and Acid Mothers Temple -- the latter an icon of the genre and a key influence on Ahimsa’s own band, Crayola Eyes.

Perhaps most visibly, Ahimsa was also commissioned to do a 6-meter-by-6-meter billboard in the Dojima business district in Osaka, as well as a 12-meter-wide illustration at the entrance to the FM802 radio station building, also in Osaka.

The Dojima work is one of Ahimsa’s personal favorites, because it combines his character with a uniquely Japanese psyche. "A representative [from the Dojima business district] who commissioned the work says they wanted my illustration there because it was filled with 'brightness' that was meant to combat the stress of the work environment, which results in high suicide rates among Japanese workers," Ahimsa noted.

Like many other Indonesians who grew up in the 1990s, Ahimsa’s childhood was filled with Japanese pop culture: Everything from animé ("Dragon Ball" and "Lupin III" were favorites), to mecha-robots and "kaiju series" monster films, as well as Japanese music (he says his favorite band is Yura Yura Teikoku, formed in 1989). Unsurprisingly, these elements remain persistent in his work, particularly in his use of Japanese syllabary. 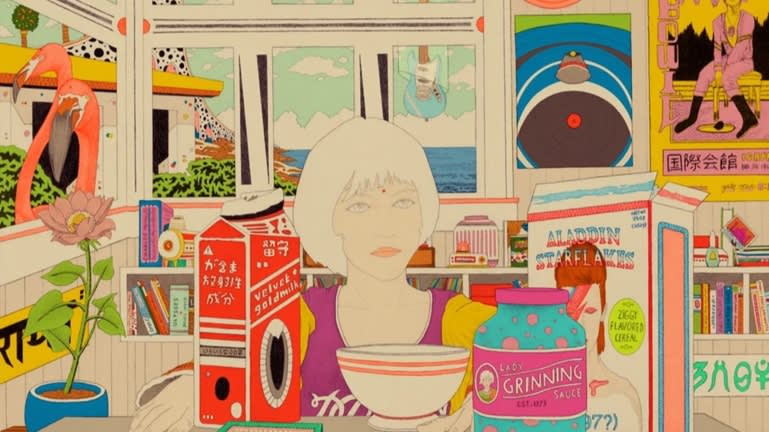 The Jakarta-born artist speaks of his "heavy Japanese influence" with nostalgic enthusiasm. Though he was at first nervous about how Japanese audiences would greet this element in his art, Ahimsa found only excitement about it.

"When I explained the ideas and mindset behind my illustrations to my Japanese audience, and particularly how different Japanese subculture influences parts of it, I met only amazement," he said. Japanese fans, he noted, were intrigued by his knowledge of their culture -- in particular his love of "old time" Japanese music and films. "They were fascinated by my perspective of their culture, as an outsider." 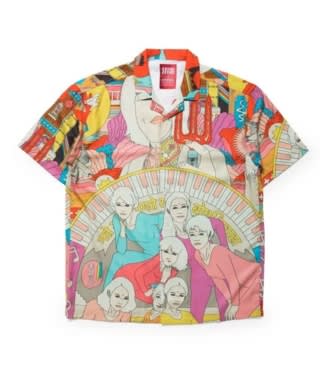 Ahimsa began his career as part of a Jakarta collective called Studiorama, which put on shows and DJ sets for independent bands -- both local and international. He drew posters for these shows, initially with a heavy reference to psychedelic concert posters of the 1960s "peace era" before finding himself dissatisfied with the lack of an identity he could truly call his own.

What Ahimsa wanted was "for anyone who saw my posters to immediately know who created it."

Instead of abandoning his love for psychedelic art, Ahimsa combined his major passions into one and infused a sense of limitation into his color palette, creating what would be his most identifiable characteristic -- a focus on the colors blue, yellow and bindi red.

Meanwhile his pencil-based drawings depict everything from Japanese and Memphis-style architecture to intergalactic fantasies, random animals and musical references (David Bowie, The Beach Boys and Sun Ra make an appearance). Adding to the sense of fantasy, all the objects and subjects in his work appear to float in low gravity.

To trigger his creativity, Ahimsa loops songs as he draws and colors. Most of his pieces are ascribed a specific song. "Celestial Broadcast," the piece he sees as the first true Ardneks artwork, was created while listening to British band The Jesus and Mary Chain's popular song, "Just Like Honey." His influences arrive without warning, often triggered by life's everyday eccentricities. "About three or four years ago I was on a train and sitting across me was this cool-looking old man with silver-colored long hair, dressed like a character from the [1994 Western epic] film ’Legends of the Fall,'” he said.

"It was kind of a long ride, and midway through, I couldn't help but notice that this old man was just staring into space, smiling to himself. That's when my train of thoughts began. 'Why is he smiling? Is he, like, crazy or something? That couldn't be it. Maybe he's seeing something, something that I can't see, something nobody but him sees.'

"My imagination ran wild and l pictured the old man as 'seeing' a magical flying carpet filled with interdimensional miniature-sized creatures. I fell so in love with the image that I decided to dig deeper into it."

Ahimsa’s hope is that as Artist Attire grows, it will increasingly feature works by other rising names in the art-design scene, with the hope of introducing them to the wider world. "We are not a brand. We are a collaborative platform," he said.

"They've given me complete freedom to develop products with my work in ways that are 'next level,'” Ahimsa said. "Instead of the usual merchandise, which are just T-shirts, we will produce shoes, sneakers and maybe even swimsuits with my drawing on it."

Looking ahead, Ahimsa feels nothing but optimism and gratitude.

"It feels like at this point in my career, I can go anywhere with art. I receive attention and messages almost daily from people all over the world, on my Instagram especially. It's really surprising and sometimes I have to tell myself 'it's really happening -- your life is now making art.'"