JAKARTA -- On the surface, Ageless Galaxy is typical of urban Indonesia's growing affluence. With its combination of stylish gray cement floors and soft, natural-looking lighting, the apparel-focused lifestyle brand's newly opened store looks more like an art gallery than a boutique, evoking exclusivity and style while its shirts, jackets, bags and other products act as design pieces.

Inside the store, located in Kemang, Jakarta's lifestyle and culinary center, items range from about $22 for a shirt to $280 for a tracksuit -- high prices in a country where average monthly salaries are around $200. In keeping with its austere style, the products are arranged with purposeful severity, with only one item of each design on show.

Co-founder and designer Tamish Aswani says Ageless Galaxy's development reflects his interest in global street-fashion brands such as U.S.-based The Hundreds and Benny Gold and Netherlands-based Patta. "More than graphics, it was about the mentality the brands carried and the reality of just being free to communicate and spread positivity -- and still make a business out of it," he says.

But Galaxy -- which brands itself AGLXY -- is more than a clothing store for deep-pocketed young Indonesians. It is also a manifestation of Aswani's story of beating cancer through self-determination and personal drive. It is, says Aswani, about living life "on the clock" and doing "awesome things in this world and be[ing] remembered for it."

According to Aswani, the company's survival in the age of COVID-19 is also due in part to an inspirational "life-guru" approach that grows out of his personal story, and which remains a rarity in Indonesia, although it is a familiar aspect of the mythology of urban art and fashion in developed countries. 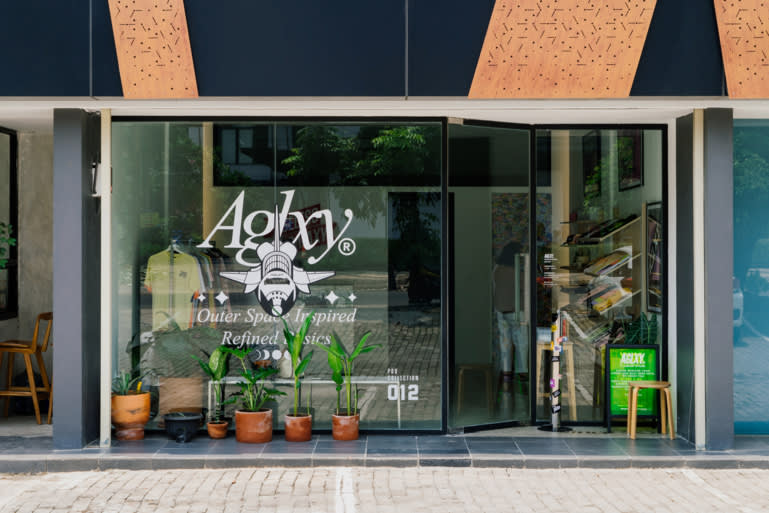 The AGLXY store is located in Kemang, South Jakarta, a hub for Jakarta nightlife and creative businesses. (Photos by Marcel Thee)

"Even though our core product is apparel, what we are really trying to translate and sell to the market is a mentality that we live by [and] our lifestyle," says Aswani, who adds that when he sees people wearing AGLXY he approaches them to say thank you, often asking why they feel connected to the brand.

"There was a kid who came in not long ago and bought a 3 million rupiah ($213) amount of gear," he says. "He shared that his father had just passed away from cancer and that he felt connected with the fighting energy of AGLXY."

Ai Anugra, 34, co-founder of Guerrilla Clothing Co., a rival clothing line, says that such brands benefit from unwavering customer loyalty because their middle-to-upper-class customers can afford to sustain their chosen lifestyle. But customers say that personal connections are also a crucial element in their loyalty to specific brands. "With the most successful brands, you feel like you know them through their owners, who you recognize or have spoken to and seen interviews of," says Mario Himawan, 38, a street-fashion admirer who owns many items retailed by Ageless Galaxy. "At times like these, you want to support them."

Aswani, who describes himself as a "punk who was always questioning stuff," was born in Mumbai before moving in Nigeria as a young child, and then to Bandung, in the Indonesian province of West Java, when he was 7. Later, he studied digital design, specializing in branding, at the Vancouver Film School, in Canada, and graphic design at Limkokwing University of Creative Technology in Malaysia.

After graduation, Aswani's design skills were recognized by clients such as Loobie Lobster, a Jakarta restaurant, and Ayo Denim, a fashion label. But in 2012, a diagnosis of Hodgkin lymphoma "really put things into perspective." The disease was treated by chemotherapy every two weeks in Singapore, for which he flew back and forth from Jakarta, feeling, he says, as dispirited as he had ever been. 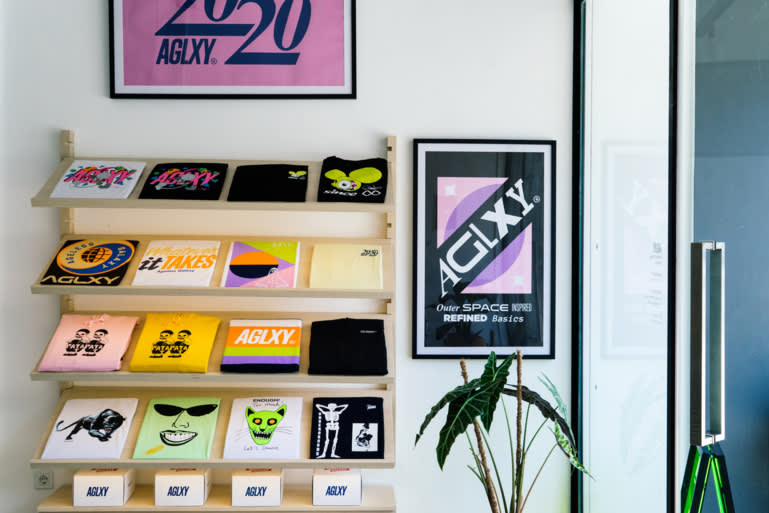 The products in the store have a curated feel. (Photo by Marcel Thee)

Though he had a solid support system, Aswani says that his lifesaver was an old folder on his laptop, containing a university project from 2011. It was for a fictional fashion brand he had dubbed Ageless Galaxy -- a reference to the vastness of the universe and life, inspired by a period when he was obsessed with science fiction. On the presentation were tag lines that he felt were prescient: "Committed to Time" and "Live to Strive, Strive to Live."

"At the time, I took it as a sort of divine intervention. It was like my past self had prepared exactly what I needed and who I needed to be to beat cancer," Aswani says. Though he has recovered from the illness, Aswani recalls thinking then, "I can't just die. I have to buy more time to prove myself."

Feeling reinvigorated, Aswani got in touch with old creative friends, including AGLXY co-founder Giorgi Krisno, 34, who was then general manager at Aksara, a primarily English-language Jakarta bookstore that also sells urban lifestyle items. A sign in the AGLXY store showcases the brand's motto of "Live to Strive." (Photo by Marcel Thee)

Instinctively, Aswani says, he knew that the combination of his design background and Krisno's business experience was a natural fit for what he wanted to achieve. The duo officially launched Ageless Galaxy in December 2013, and by 2017 annual production had reached 300 pieces of each of 20 designs.

Sales rose from 120 million rupiah in 2015 to 3.7 billion rupiah in 2019, but have dipped by about 40% since the pandemic began, prompting sales campaigns beyond the website and store -- something that was previously rare for lifestyle brands, which like to retain an image of exclusivity. Sales on e-commerce sites such as Tokopedia have been good, says Aswani, and the store opening has helped to attract attention, particularly through visits from people in the clothing industry who have shared their enthusiasm through social media.

AGLXY has also launched collaborations with food outlets such as Burnt Ends, a Michelin-starred Singapore restaurant, and Bakmi GM, a Jakarta noodle franchise, and with James Marshall, also known as Dalek, an influential American designer-artist. In most of these collaborations, AGLXY creates a design conveying an idea common to both brands. AGLXY produces the merchandise, usually, but not always, in the form of clothing. A collaboration with SaladStop, a healthy food outlet, led to an AGLXY salad menu wrapped inside specially designed packaging.

However, Aswani says the company's main inspiration remains his personal story and the connections it brings. "AGLXY isn't about assets, or products, or those kinds of things," he says. "It's about this mentality that we carry on our back, which is, 'I don't want to go down without anybody knowing who I am and what I stand for.' If I'm going to stand for something, I'm going to have to create something and be inspiring."