The late Myanmar artist Bagyi Aung Soe sought to transcend the Western influences that dominated artistic themes in the country and create illustrations with accessible materials, such as simple markers and pens. His work is being shown at the Centre Pompidou in Paris through Aug. 23. (Photo by Sonny Nyein, courtesy of the Centre Pompidou)
NATHALIE JOHNSTON, Contributing writerJune 16, 2021 08:00 JST | Myanmar
CopyCopied

YANGON -- What should have been a great moment for Myanmar contemporary art, an exhibition at the Centre Pompidou in Paris celebrating the late artist and actor Bagyi Aung Soe, was overshadowed by the Feb. 1 military coup in Myanmar.

But in some ways it seemed fitting that the backdrop for the exhibition -- post-coup violence, chaos and confusion -- highlighted similarly historic moments that Bagyi Aung Soe lived through and occasionally addressed in his work, up to his death in 1990 at the age of 66.

The artist's principal goal throughout his life was to transcend the Western influences that dominated artistic themes in the country at the time, and create illustrations with accessible materials, such as simple markers and pens, to convey a style unique to Myanmar. He succeeded and is now one of the most celebrated modern artists in his home country because he gave future artists a sense of individuality and pride -- important tools to use as artists living under a military dictatorship.

The exhibition, running until Aug. 23, was a highlight of the reopening of the Centre Pompidou after almost a year of closure due to COVID-19. Aung Soe's status in Myanmar art and literature circles has been both mythical and legendary. He was born in what was then Burma during the period of British colonial rule and came of age at a time of rising nationalism. He grew up in relative privilege and wealth, circumstances that allowed him to focus on more artistic pursuits. To underscore his priorities, he added "bagyi" -- which means both "the art of painting" and "painting" -- as a prefix to his name when he was in his late 20s.

After Burma's independence in 1948, he was awarded a scholarship to study at Santiniketan in India, a famous school founded by the Nobel laureate Rabindranath Tagore to espouse his ideas of uplifting indigenous and ancient spiritual and creative practices, developing a style of semi-abstract, modernistic art while pursuing the principles of modernity outside a Western context. In Aung Soe's work, these principles included the merging of individual expression with underlying religious beliefs, an embrace of sexual and political themes in the context of Burmese society, and an intention to share artwork not on gallery walls but through mass publications like journals and newspapers. His short time at Santiniketan changed him and when he returned to Myanmar to work and live among artists, writers and poets, he changed them too.

Aung Soe was first and foremost proclaimed as "a poet's artist," because he was able to illustrate so beautifully the contemporary poetry of his day, capturing meaning through images and symbols. Yin Ker, the curator and organizer of the exhibition, first encountered the artist's work in 2000. She devoted much of the next 20 years to researching and archiving his work. Her fastidious scholarship of the artist, his native country, and Buddhism in its various forms made her the ideal curator to amalgamate the many lives and ideas of Aung Soe. 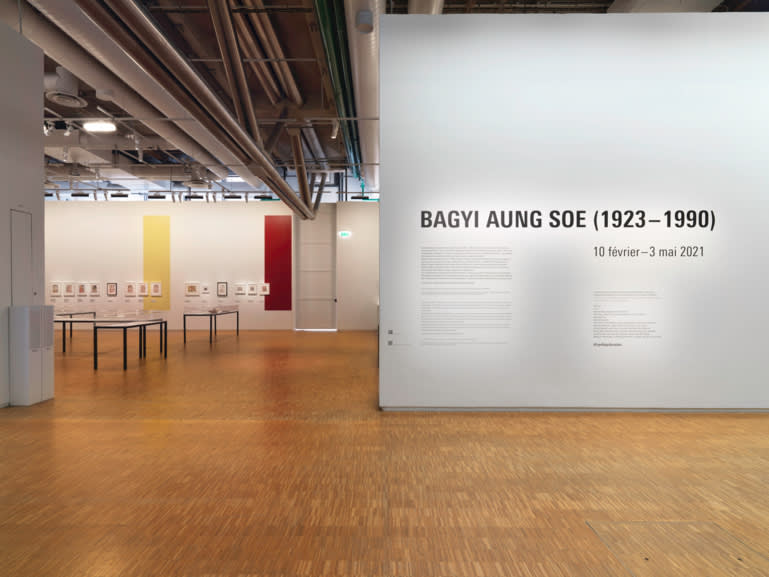 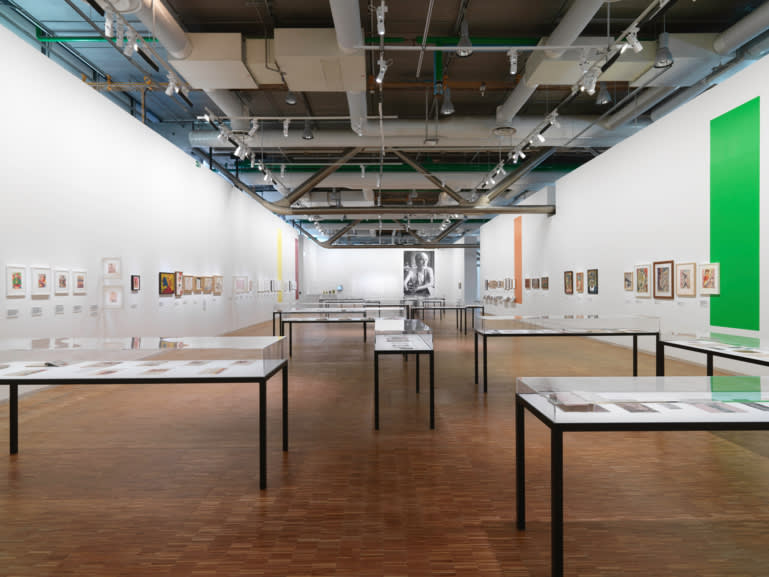 The exhibition in Paris explores the spiritual and somewhat disorienting symbols in Aung Soe's work and addresses the influence of meditation and Buddhism on the artist. (Courtesy of the Centre Pompidou)

In Yin Ker's words, the exhibition is "an invitation to see beyond the facile assumptions of Myanmar, her people and art which have been unfortunately dominated by a simplistic reading of politics." The exhibition achieves this by exploring the spiritual and somewhat disorienting symbols in Aung Soe's work and addresses the influence of meditation and Buddhism on the artist. In her exhibition essay, "Bagyi Aung Soe: Juggling Paradoxes in the Here & the Now," Yin Ker connects and explores the artist's imagery and legacy and his decades of contribution to art and society in Myanmar.

Aung Soe's life reflected the upheavals of Myanmar in the 20th century, which included World War II and the Japanese occupation, a military coup in 1962 and the subsequent launch of the Socialist Era, and the student uprising on Aug. 8, 1988. He worked under the censorship of the Socialist era, and was therefore barred from creating overtly political images for the various publications which published his work. He died two months after the first landslide election victory for Aung San Suu Kyi in 1990. Burma's junta changed the country's name to Myanmar in 1989 but Aung Soe did not live to see the ensuing years of harsh military dictatorship, censorship and civil war.

Nor did he see the brief flowering of contemporary culture and relative freedom in his country. The last decade in Myanmar saw more advances in society than the preceding 30 years combined. Military leaders became politicians, the country opened to tourism and investment, and censorship ended. The people dreamed of prosperity and there were hopes of a creative renaissance among artists. The Feb. 1 coup changed all that and now Myanmar is sliding into civil conflict and economic ruin, as free expression is crushed, protesters are killed and many thousands detained by the junta's security forces. 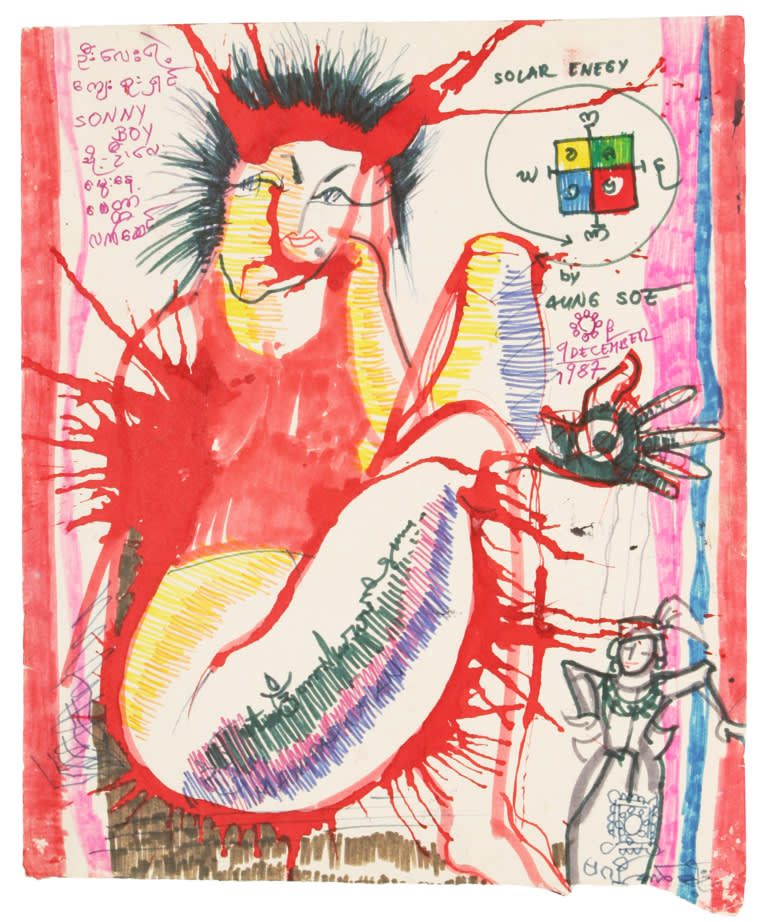 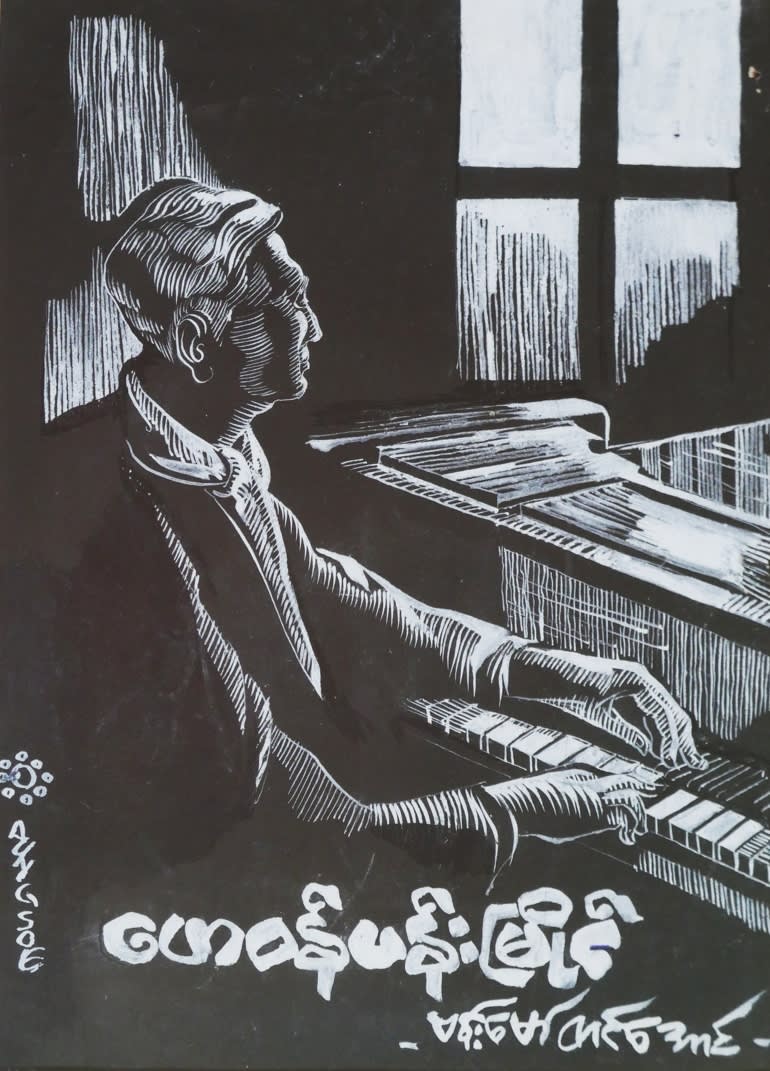 Top: "Sonny Boy" Center: "The Garden in Blossom" Bottom: "A Husband Who Respects His Wife" (Courtesy of the Centre Pompidou)

In considering how Aung Soe flourished in 20th century Burma despite political and economic turbulence, his life and work can offer advice and inspiration to artists working in Myanmar today. Well-known contemporary artists like Chaw Ei Thein, Aung Myat Htay, San Oo, Soe Yu Nwe and Htein Lin all describe how his lifestyle and philosophy that influenced their work. "It was refreshing and encouraging for me to see such art in Myanmar history and I felt he helped make a place for future contemporary artists like all of us," said Soe Yu Nwe, a female ceramic artist from Yangon.

Reading Aung Soe's biography on the exhibition website which captures how his contemporaries generally saw him as both insane and brilliant, one cannot help thinking of another artist who embodied so much of what Aung Soe strived for -- Nyein Chan Su, who was known as NCS.

Nyein Chan Su died in early 2020, just before the COVID-19 pandemic hit Myanmar. His cremation ceremony on the outskirts of Yangon drew hundreds of fans. His life in some ways mirrored much of Aung Soe's trajectory, and like Aung Soe, his presence in Myanmar's contemporary art scene was like an island, allowing others to enter his space but never entering theirs as he traded artworks for booze or company, food or medicine. "The Buddha," top, a postcard, center, and an illustration by Aung Soe. (Courtesy of the Centre Pompidou)

With his mixed media, large-scale paintings, NCS inspired younger artists even as he lamented their lack of awareness. His drunken pontificating on Buddhist philosophy or the importance of incorporating local tradition in contemporary artwork were familiar to all who knew him. Yin Ker writes similarly about Aung Soe. His brilliance and his isolation were characteristics that made him attractive and inspiring, she notes, but he often lectured his peer group and younger artists on cultural identity and criticized the commercialization of the art world.

Aung Soe has many admirers in Myanmar and overseas today, both young and old, but his works are not yet populating the auction blocks of Southeast Asia's contemporary art. The few works that become available are sold to private collectors, who are already in the know about his importance in Myanmar's art canon.

The independent spirit and communal intention of his work have made an impact on those born after his death, such as the numerous Generation Z artists now emerging. They do not specifically reference his styles in their works, but they engage his spiritual quest to marry ethnic cultural identities with their own desire to express themselves politically. This new generation is creating artwork despite often violent persecution by the junta's security forces, producing images meant to uplift street protesters, those aligned with the civil disobedience movement, and the public confronting the military dictatorship. As of mid-June, nearly 900 civilians have been killed and more than 6,000 people arrested by the junta since Feb. 1. 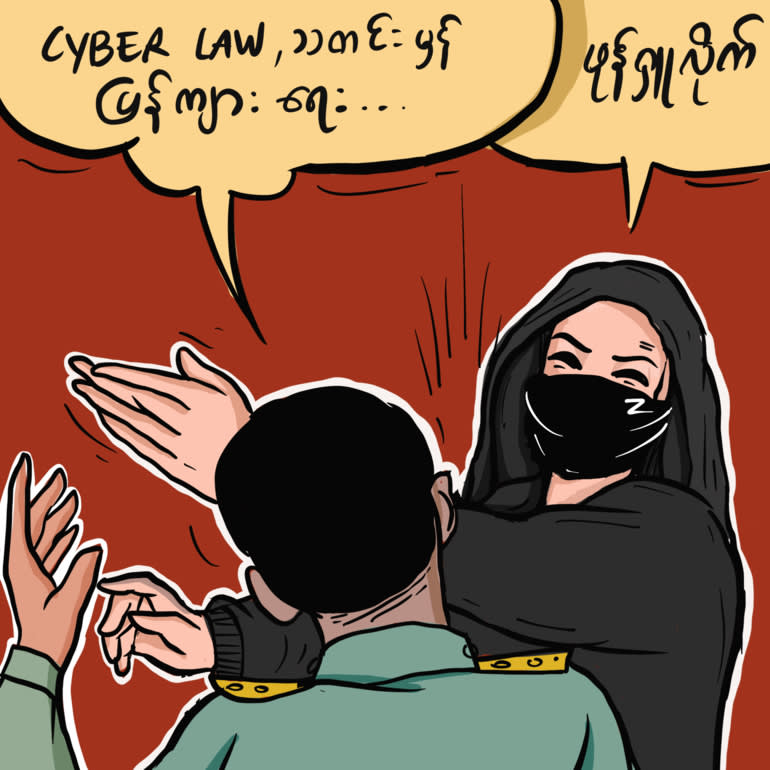 The work of young Myanmar artist Ku Kue embodies Aung Soe's balance of tradition, originality, sense of satire and obligation toward his community. Her words and images, such as in her works "Slap You," top, and "Our Longyi, Our Flag," reflect both the current times and the traditions of Myanmar. (Courtesy of Ku Kue)

It is impossible to determine what Aung Soe would have thought of today's young artists. Since he was not a fan of the art market in general and did not often engage with Yangon art galleries or local collectives, it is safe to assume that he would not have taken up the role of mentor.

But this generation of young people have had the last 10 years, a period of freer expression than any decade since the 1950s, to hone their intellect and analyze their own histories in ways no generation before them could.

Perhaps the one young artist who embodies the real spirit of Aung Soe -- his balance of tradition, originality, sense of satire and obligation toward his community -- is Ku Kue. Her artwork is meant for the internet, the children's storybook, the printed periodical, or the street poster -- not the gallery. She caters not to collectors or the elite, but to ordinary people. Her words and images reflect both the current times and the traditions of Myanmar. She readily acknowledges the huge influence Aung Soe has had on her recent work. "Yes I love him. You can say it," she told me. 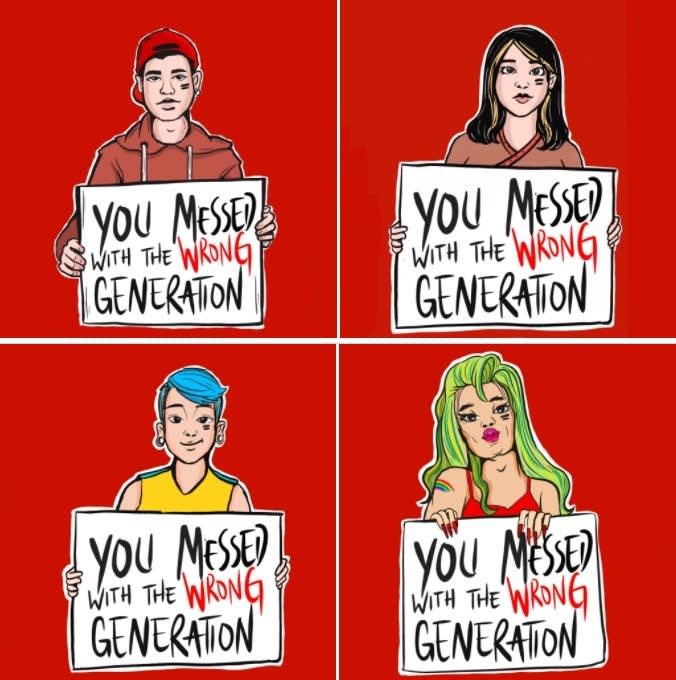 Centre Pompidou has been a leader among Western art institutions in its recognition of work by modern Asian artists, including from Myanmar and elsewhere in Southeast Asia. "It deserves credit for planning this exhibition years ago and making sincere efforts to expand their program by featuring artists like Latiff Mohidin [from Malaysia] and Bagyi Aung Soe," said Jasdeep Sandhu, a collector of Aung Soe's work and owner of the Gajah Gallery in Singapore.

The region's scholars, academics and curators often complain about the dearth of inclusion in exhibitions and art historical scholarship for artists and art histories from the region. In developing the Pompidou exhibition, Yin Ker said the intention was "to move closer to a contextual approach to reading and experiencing art beyond the binaries of tradition versus modernity and the East versus the West." Every country has its share of mad and brilliant artists, and it is both timely and poignant to put the international spotlight on Myanmar's Aung Soe.