Iranian composer and producer Mehdi Rajabian has been banned, imprisoned, tortured and thrown into solitary confinement, becoming one of the most discussed Middle Eastern musicians of the past decade. (Courtesy of Mehdi Rajabian)
MARCO FERRARESE, Contributing writerNovember 17, 2021 08:00 JST | Iran
CopyCopied

TEHRAN -- A haunting cello melody cuts through a somber bass background like a sharp saw biting into ancient, hardened wood. "Whip on a Lifeless Body," the dark opening track of "Coup of Gods," the latest album by Iranian composer and producer Mehdi Rajabian, plumbs the deepest meaning of music -- and may turn out to be the renegade Middle Eastern artist's last cry of protest.

"[In that song] we tried to create the suspended space of the earth and the sky," said Rajabian, who was listed among the world's top 10 rebel artists in a 2018 poll by the World Journalism Organization.

The disturbing anguish of "Coup of Gods" springs from the artist's tortured musical journey. Born in the Caspian Sea province of Mazandaran, activist and multi-instrumentalist Rajabian has run the record label Barg since he was 17, distributing alternative sounds and releasing albums featuring solo female singers -- who are forbidden to record in Iran.

This may have helped to put Rajabian on the radar of Iran's Islamic Revolution Guard Corps, which sent the then-22-year-old musician to Tehran's infamous Evin Prison in October 2013, charged with insulting the values of Islam and spreading propaganda against the regime.

Since then, Rajabian has been banned, imprisoned, tortured and thrown into solitary confinement, becoming one of the most discussed Middle Eastern musicians of the past decade. His music is considered "unacceptable" by Iran's regime, whose ultraconservative President Ebrahim Raisi, elected in June in a rigged vote, is a former judge accused by human rights campaigners of involvement in multiple secret executions of political prisoners. The regime is particularly irked by Rajabian's use of female vocalists -- an act described by an Iranian court as "encouraging prostitution."

Against all odds, Rajabian has never stopped making music. "Coup of Gods" was written while the artist was serving a three-year suspended sentence. Released on Sept. 17, it was produced in the U.S. by Harvey Mason Jr., who has written and recorded music with artists such as Aretha Franklin, Michael Jackson, Beyonce and Britney Spears, and is the current president of The Recording Academy, which presents the annual Grammy Awards for musical achievement.

"I heard his story and it was compelling, but ultimately it was the music that excited me and made me want to release his project," said Mason, who released "Coup of Gods" on his Hundredup label.

Submitted for consideration for best global music album, best arrangement and instruments and best vocals categories at the next Grammy Awards, to be presented in Los Angeles on Jan. 31, 2022, "Coup of Gods" may raise global awareness of Rajabian's music, in turn helping to protect him from the Iranian regime. Or the album could turn out to be his swan song: The artist was dragged to court and ordered to stop working on the album last year, so its release could trigger a return to prison. 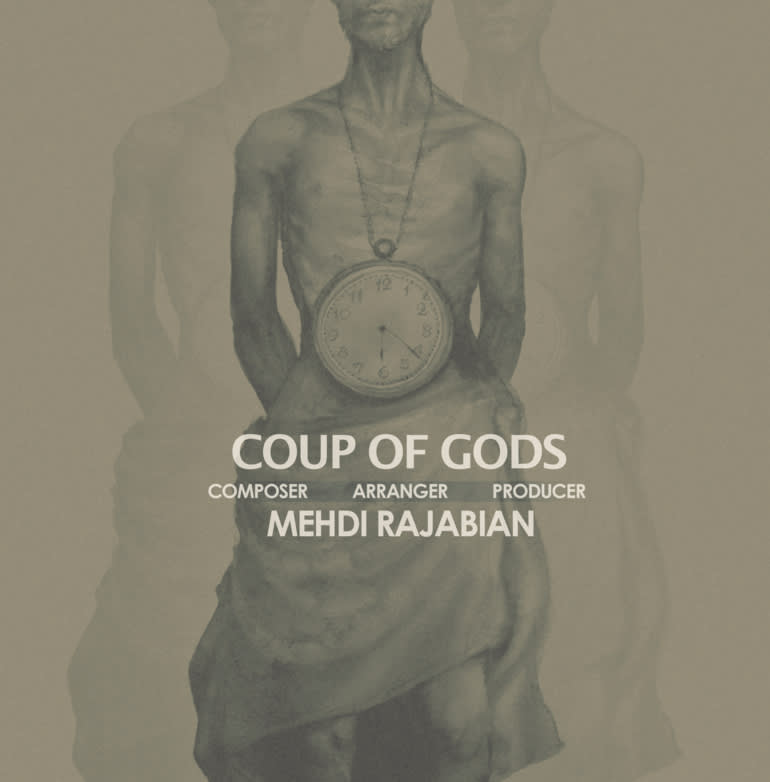 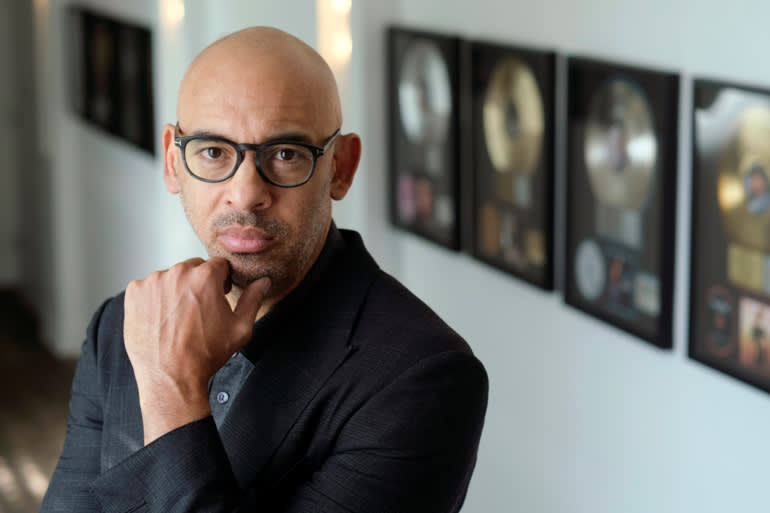 Top: The cover art for "Coup of Gods" is a nod to Rajabian's own struggles as a persecuted artist in these troubled times. (Courtesy of Mehdi Rajabian) Bottom: "I heard his story and it was compelling," says Harvey Mason Jr., who produced the record, "but ultimately it was the music that excited me and made me want to release his project."   © AP

"I don't think about the consequences of the work of art, and I produce what I want," Rajabian said from his home in Iran. "Working with Harvey is enjoyable; he is a great artist. Definitely what made this collaboration possible was the sound that came out of the speakers, and nothing else."

That sound, however, does not come from the artist's own hands. Rajabian played the setar (a lutelike Iranian instrument similar to the Indian sitar) on his incomplete and banned debut album "The History of Iran Narrated by Setar" (2011-13), which dealt with the 1980-88 Iran-Iraq war. He was limited to composing and arranging "Coup of Gods," however, because injuries sustained in 2016 while on hunger strike in prison have left him unable to play.

Rajabian's imprisonment was suspended when he was released on bail following a campaign by the human rights organizations Amnesty International and Freemuse, which supports freedom of artistic expression and cultural diversity. The groups' global campaign "Art Is Not A Crime" was backed by celebrities such as actor Johnny Depp, singer Peter Gabriel, and the Chinese artist Ai Weiwei. Tehran's infamous Evin Prison, where Rajabian was sent in 2013 after being charged with insulting the values of Islam and spreading propaganda against the regime. (Getty Images)

But the 40-day hunger strike almost killed Rajabian, who lost 15 kg in weight, suffered severe internal bleeding and vision problems, and became unable to play instruments because of joint and muscle swelling. "When an artist fights, the first thing he destroys is himself, and then his art," Rajabian told Nikkei Asia. "I did my best to imbue my art with the most pristine philosophy and thought, but my physique and body will keep fighting for freedom."

Rajabian, who cannot travel outside Iran and is unable to work with other Iranian musicians, recruited musicians via the internet for "Coup of Gods," as he did for his earlier album "Middle Eastern" (2019), conceived in prison and released by Sony Music, which features some 100 musicians from Iran, Turkey, Syria, Palestine, Yemen, Iraq, Egypt, Lebanon, Jordan, Oman, Bahrain, Tajikistan and Azerbaijan.

For "Coup of Gods," Rajabian set up a virtual ensemble that mixes a Brazilian orchestra with musicians from Turkey, Russia, India and Argentina. "We were all far apart, but I did my best to make the recording feel like we were all playing together in a studio," Rajabian said.

Each instrument was recorded in a different country by artists including the Italian-born and Brazil-based violinist Emmanuele Baldini and Brazilian cellist Rafael Cesario, the Iranian percussionist Navid Afghah, and the female singers Lizzy O'Very and Aubrey Johnson from the U.S., where the album was mixed and produced by Mason. The result is four oriental-sounding suites that stir the soul. "Participating on this album brought my attention to the pain and struggles that so many people are facing, most of [which] I will never understand," O'Very said. "I was humbled to be a part of this project knowing that it was a risk for many who were involved. I hope with all of my heart that this music, along with the stories, can be heard, and seen in their raw, natural form."

Rajabian's music straddles Middle Eastern musical traditions, extending into the steppes of Central Asia and yet flirting with classical Western music tropes. Asian folk instruments ranging from the yaybahar -- an acoustic string synthesizer invented by the Turkish musician Gorkem Sen, who plays on the album -- to the flutelike Armenian duduk, the Hindustani sarangi and the Iranian goblet drum tombak, seamlessly interweave with violin, viola, double bass and cello.

"I did my best to produce an album in a different color, both in terms of the harmonies and the use of the female voices," said Rajabian. "If a composer uses Eastern folk instruments alongside Western instruments unknowingly ... without proper coordination in terms of texture, melody, harmony, and counterpoint, even ordinary audiences would understand their wrong use." Rajabian said the innovative mix of sounds "represents what is going to happen in the future." Like the gaunt man with a giant clock hanging from his neck pictured on the album's gray-toned cover, the sound is so stripped down and hopeless that it becomes almost visual, evoking images of an equally bare-bones tomorrow.

The melodious female vocalizing of the album's closing track, the title song "Coup of Gods," feels particularly fitting as a conclusion to Rajabian's journey of reflection on the sore conditions of our times.

"Humanity has experienced everything one could have ever seen, and we, as artists from the Middle East, can no longer make the audience sad, happy, or surprised," he said. "When art loses its power, any wrongdoing can become reality in any society. We are spinning in a great vortex, but the world stays silent about it, as if a large crowd had decided to pretend that lies are real." "We are spinning in a great vortex," says Rajabian, "but the world stays silent about it, as if a large crowd had decided to pretend that lies are real." (Courtesy of Mehdi Rajabian)

"All my work is published for free because giving free access to the work of art is an important part of artistic freedom. I will definitely never get rich," quipped Rajabian, who cannot sell his albums or give concerts in Iran, and whose office has been sealed by the authorities.

Legislation passed in late July to hand control of Iran's internet gateways to the military and criminalize virtual private networks also means that Rajabian could soon be barred from connecting with the outside world. He certainly was not able to travel to the U.S. for the customary self-promotion during the first round of voting for the Grammy Awards.

"I have no income and I think it will be very difficult, and maybe impossible, to produce another work of art in the future," said Rajabian. "But I still try to [abide by] the law of artistic independence."

Ahead of the Grammy Awards shortlist announcement, expected in late November, "Coup of Gods" can be heard free via the artist's website, and on Spotify, Soundcloud and other streaming platforms.